Residents feeling apprehensive about a second wave of COVID-19 in Ontario had their fears confirmed on Monday by Premier Doug Ford, who said that it has indeed already arrived — but many may still be wondering how bad, exactly, officials expect this bout of the pandemic to get.

Though some scientists reject the terminology of a "second wave" because we never really overcame the first, cases of the communicable disease have definitely been rapidly escalating province-wide after a lull over the summer months.

And according to new modelling data, it looks like things are slated to continue to worsen.

We hit the height of the health crisis in late April and early May, when we saw a record 640 new cases reported across Ontario in just one day on April 24.

This number was surpassed just two days ago when the province announced a troubling 700 new positive diagnoses, igniting calls for at least some regions to impose stricter lockdown measures.

Unfortunately, projections from experts at the University of Toronto, University Health Network and Sunnybrook Hospital show that we're likely headed for even higher numbers, potentially hitting more than 1,000 new infections per day by mid-October.

The data indicates that this figure could be avoided if more steps to mitigate the spread are taken — lockdown round two, essentially —making for a best-case "lower severity" scenario that echoes the first peak in the spring followed by another slow decline.

In all iterations of the second wave, things vary depending on which demographic is hit the hardest: if primarily low-risk (young and/or healthy) people fall ill with the virus, there is obviously less of a strain on the healthcare system.

Though young people under 40 have been constitutitng the bulk of recent cases, infections can easily spill over into more vulnerable contacts. 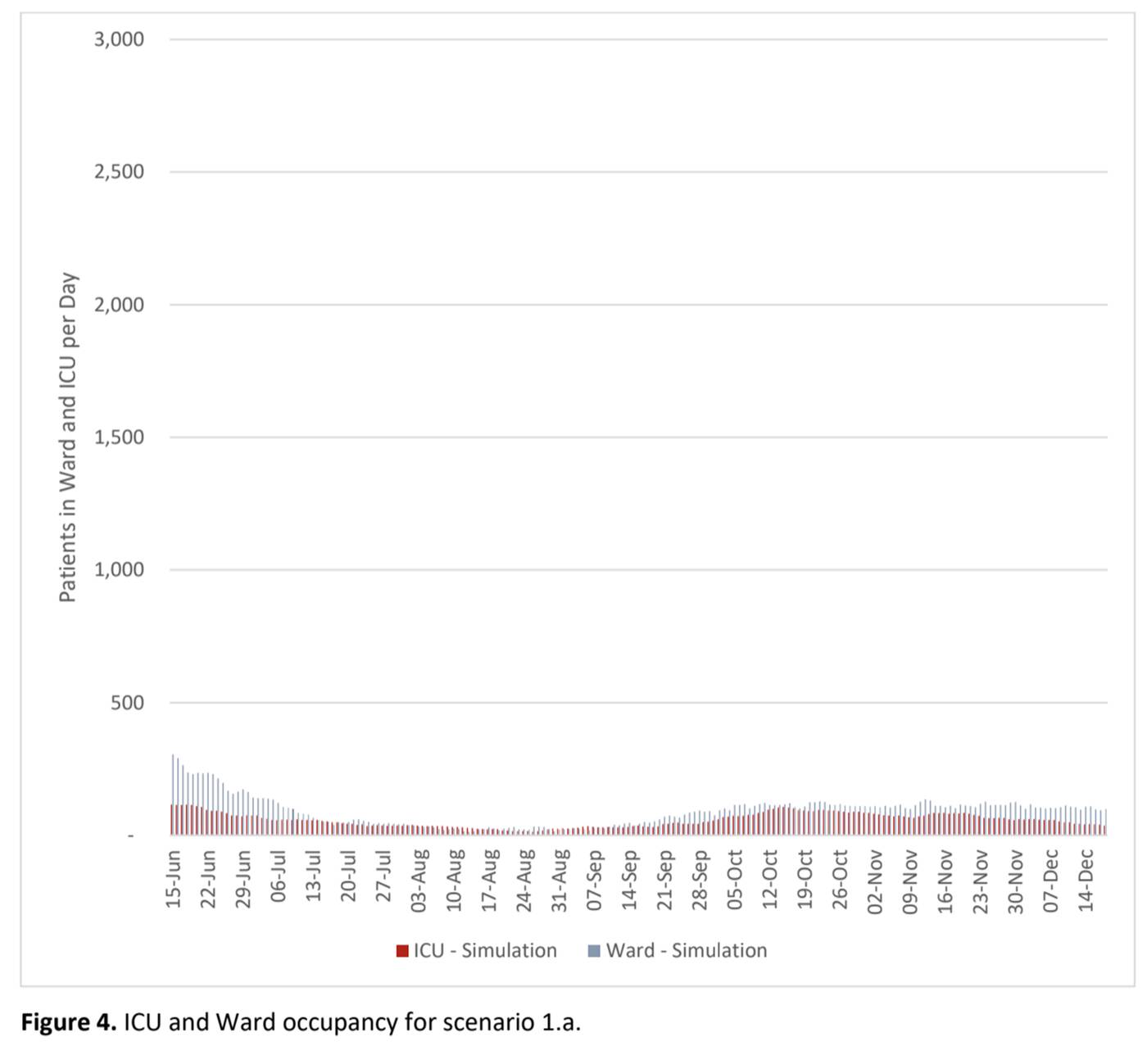 In the worst case, we could indeed overrun ICUs and hospitals past their capacity to adequately care for all patients, even if all scheduled surgeries are put on hold (compared to just some that would have to be delayed to free up beds in all the above scenarios).

This would be a situation comparable to the chaos that was Italy back in April, where doctors had to decide who they could afford to put on a ventilator and who they simply didn't have the resources to save.

It is important to note, though, that the worst of the modelling data from the first wave never came close to fruition. 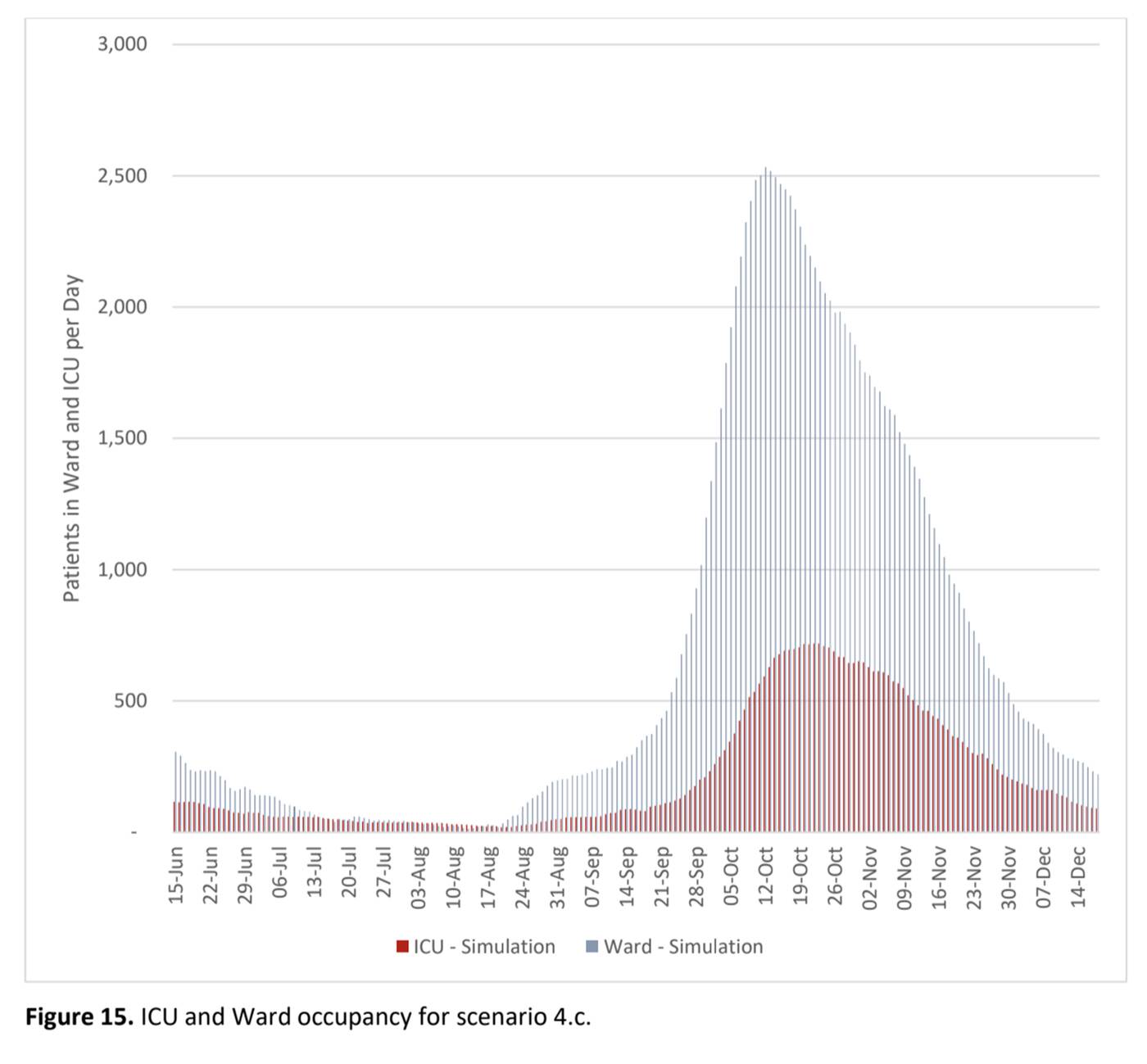 Regardles of which of these projections ends up being the most accurate, Ford and health experts have agreed that this second wave in Ontario will be more serious than the first no matter what.

"We know that this wave will be more complicated, more complex, it'll be worse than the first wave we faced earlier this year," Ford said at his presser on Monday, imploring residents to stay on the ball as far as health and safety measures.

They won't be. Models are a guess.

"If we can get everyone to take these simple steps, we can tip the scale, we can avoid the worst...  we don't know yet how bad the second wave will be. The reality is it's up to each of us. Together, our collective actions will decide if we face a wave or a tsunami."

As of Sept. 28, Ontario has 4,791 active cases of COVID-19, 137 of which are hospitalized, 30 of them in the ICU and 16 of those on a ventilator. With the recent surge in new cases, the recovery rate within the province has quite swiftly dropped from 90 per cent to 85.1 per cent.