The COVID-19 outbreak appears to have finally peaked in Ontario

New modelling data released today by Ontario's COVID-19 Command Table suggest that we may now be through the worst of this outbreak in terms of community-spread cases.

"While earlier models predicted a peak in cases in May, public health interventions, including widespread adherence to physical distancing, have accelerated the peak to now," reads a report accompanying the province's updated projection models, released Monday.

"The sacrifices people are making to stay home and wash their hands are making a difference." 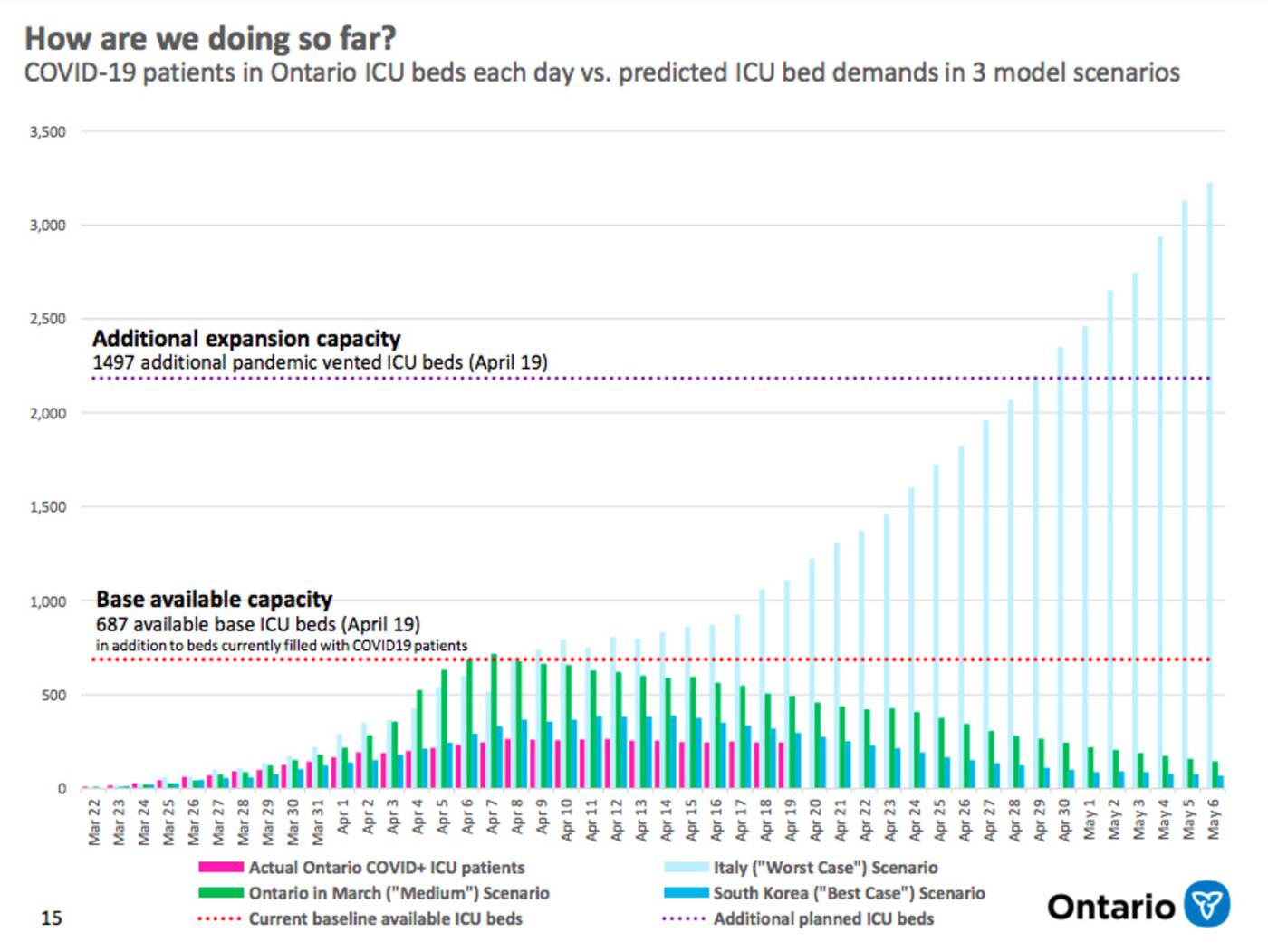 Government officials say it's likely the COVID-19 outbreak has already 'peaked' in Ontario. Image via Ontario.

The province's top health officials announced today that they had revised the total number of cases they expect to see throughout the course of the pandemic from 80,000 to less than 20,000 — far better than the "worst case scenario" of 300,000 cases projected on April 3 and close to earlier "best case" projections of 12,500.

Ontario also appears to be tracking better in terms of flattening the epidemic curve than hard-hit areas like Italy and New York.

Based on the updated models, the province is actually headed toward a South Korea-like situation (which is widely considered to be the best case scenario possible). 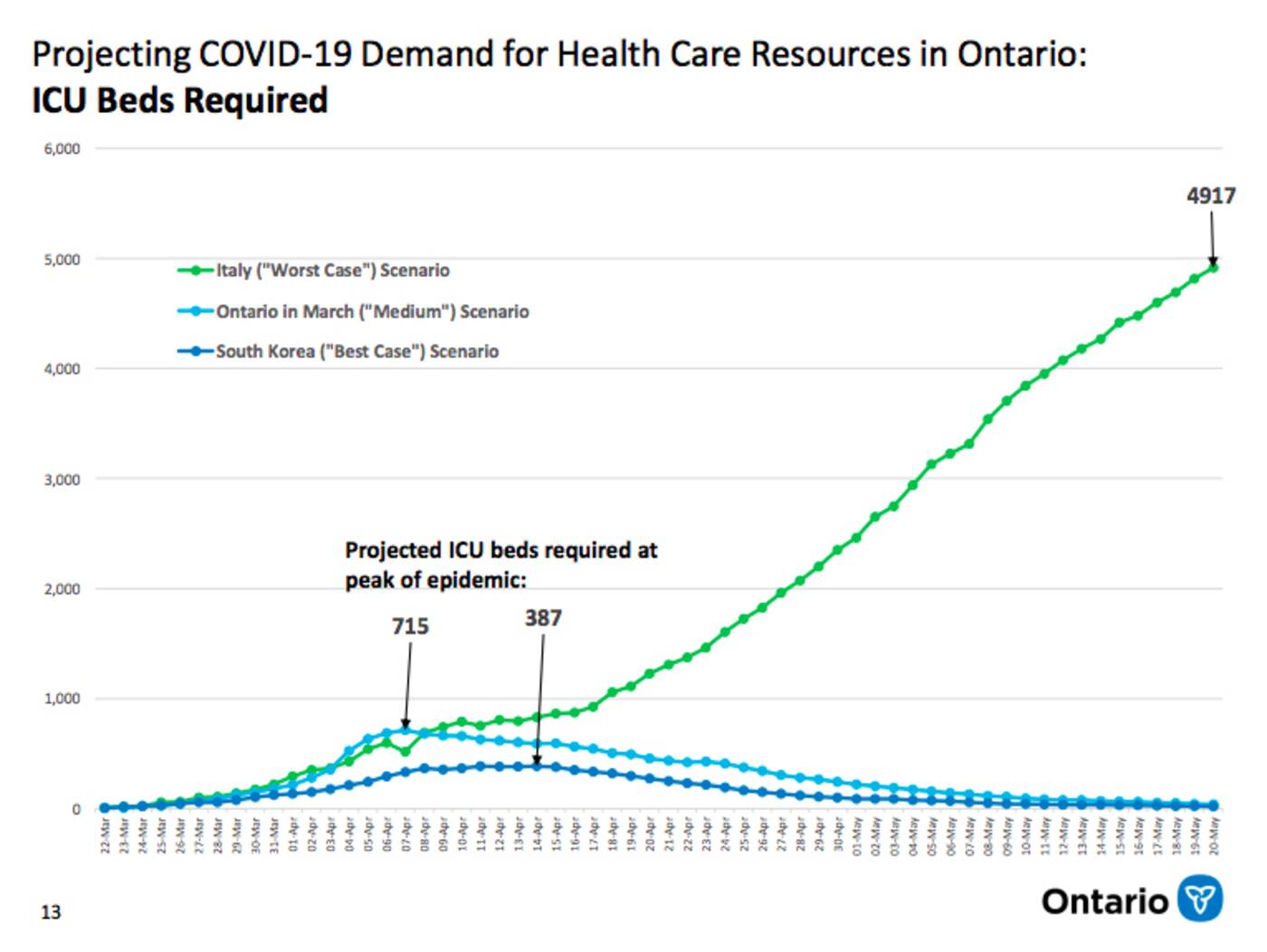 Hospital demand modeling scenarios released on April 20 suggest that Ontario's health care system will not be overwhelmed by COVID-19. Image via Ontario.

While most of the figures unveiled by the province on Monday are hopeful, officials do warn that spread of the virus in congregate settings (such as long-term care homes) appears to be growing.

They also stressed the importance of following current public health directives to reduce the number of cases and prevent future outbreaks of COVID-19.

"Enhanced public health measures, including staying home and physically distancing from each other, are working to contain the spread of the virus and flatten the curve," reads a release from Premier Doug Ford's office issued Monday.

"However, the Chief Medical Officer of Health says emergency measures must remain in place to continue reducing the number of cases and deaths." 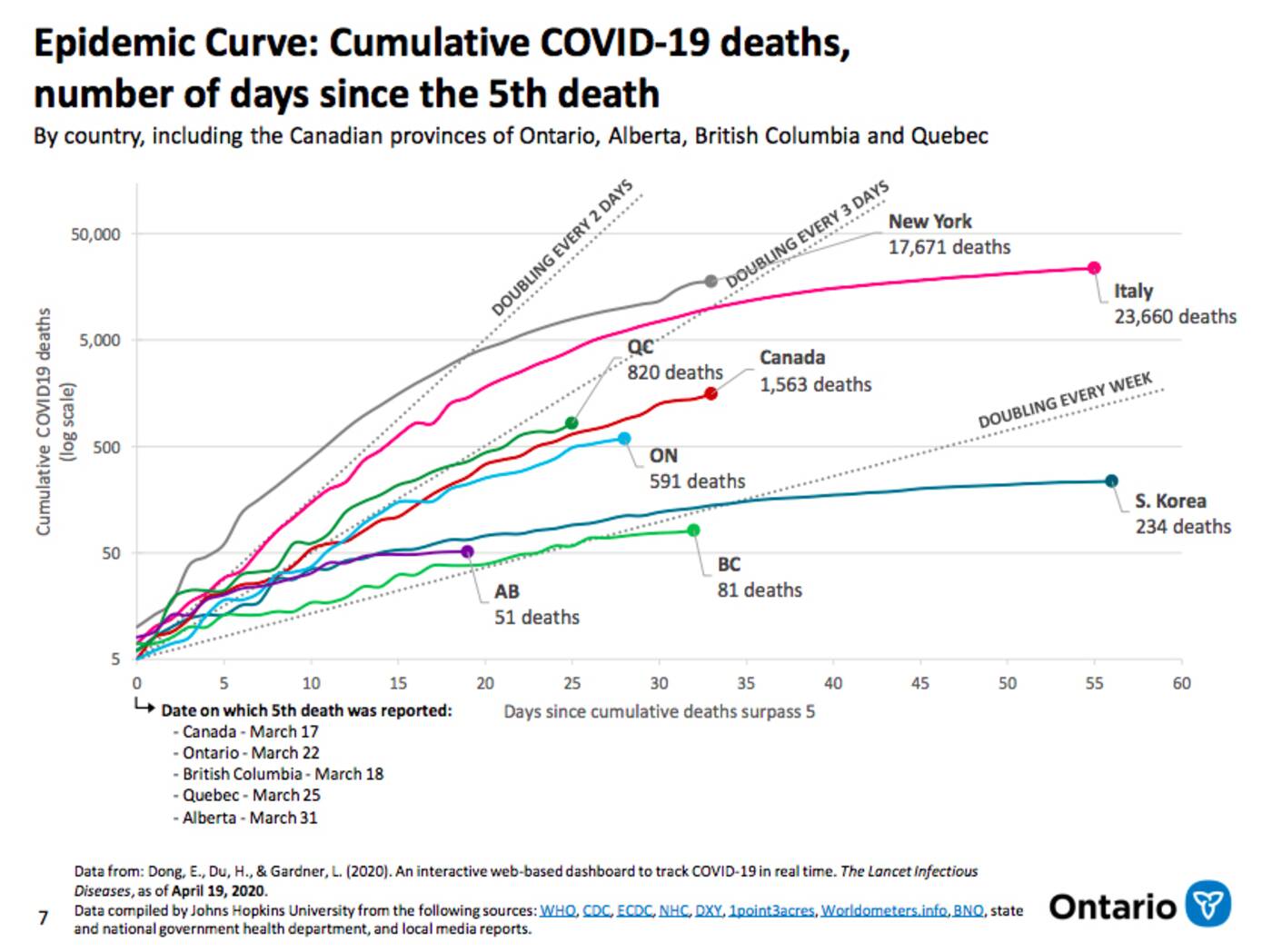 Ontario government officials say the province has 'significantly improved its standing' as compared to models from March. Image via Ontario.

Ford himself praised the actions of all Ontarians who are staying home and practicing physical distancing, as well as the "the heroic efforts of our frontline healthcare workers."

"But COVID-19 continues to be a clear and present danger, especially to our seniors and most vulnerable citizens," he said. "That is why we must continue to follow the advice of our Chief Medical Officer of Health and stay the course in order to keep people safe and healthy."

The COVID-19 command table recommends in its modelling report on Monday that Ontario's current state of emergency be extended until at least May 12 to further flatten the curve and stop the spread of COVID-19 for good.