Ontario finally releases its COVID-19 model projections and they're frightening

As promised yesterday during an intense press conference in which he called the COVID-19 threat "extremely, extremely serious," Ontario Premier Doug Ford has shared with the public a data set that many have been calling for, but that none were happy to see.

Predictive modelling projections compiled by the province's top doctors and scientists suggests that, based on our current trajectory, Ontario will likely see 80,000 cases of COVID-19 by the end of this month with 1,600 fatalities.

This is if we continue on under current emergency restrictions imposed by the province, including the closures of schools, businesses, all non-essential services and strict social distancing orders. 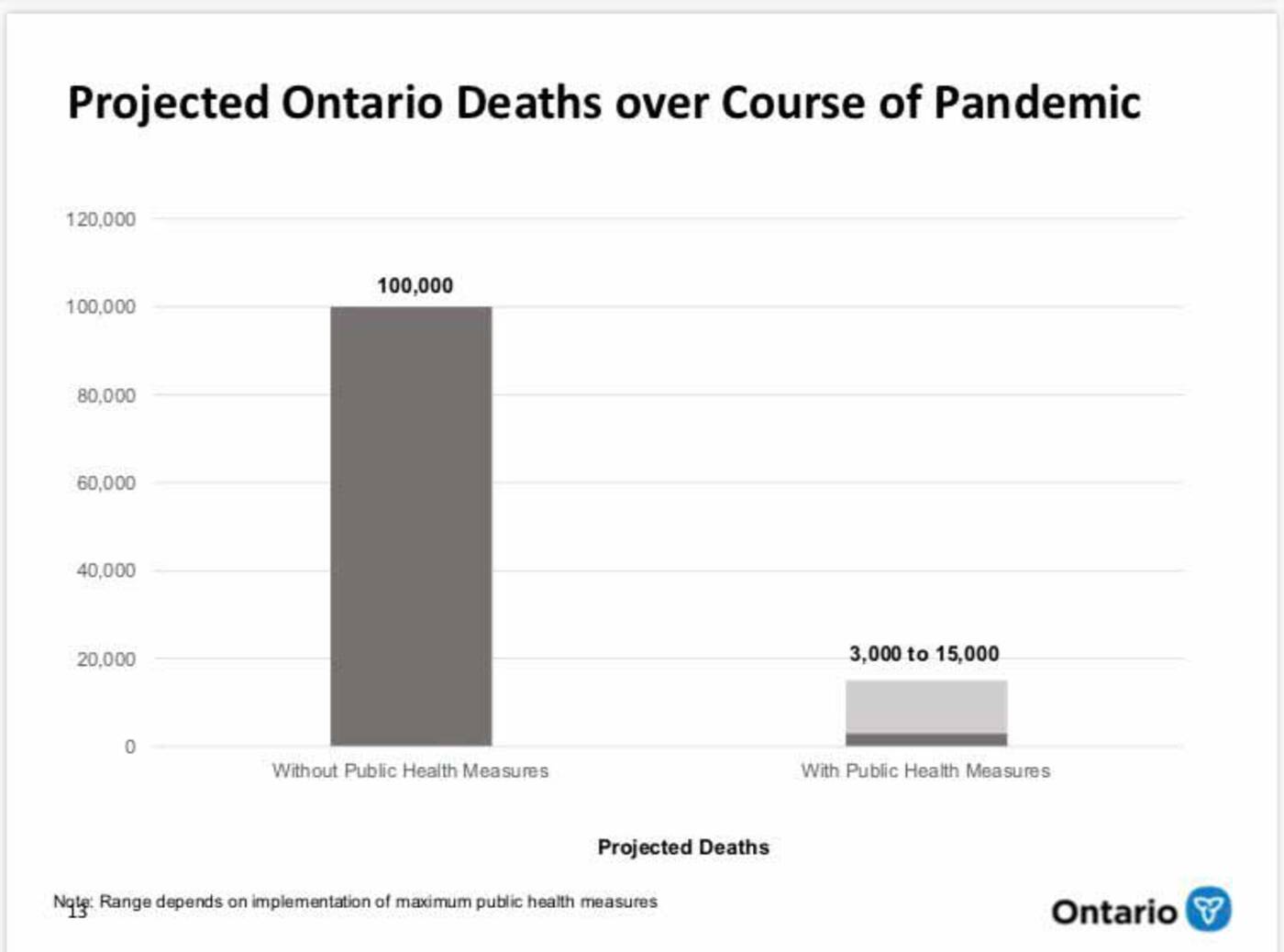 With "full future intervention," we could bring the number of cases diagnosed in April down to roughly 12,500, and the number of deaths to just 200.

It is not yet clear how much further the province will go in locking down Ontario residents to prevent the spread of COVID-19, but Public Health Ontario President Dr. Peter Donnelly did say during a press conference revealing the models that "further actions are being proposed and taken." 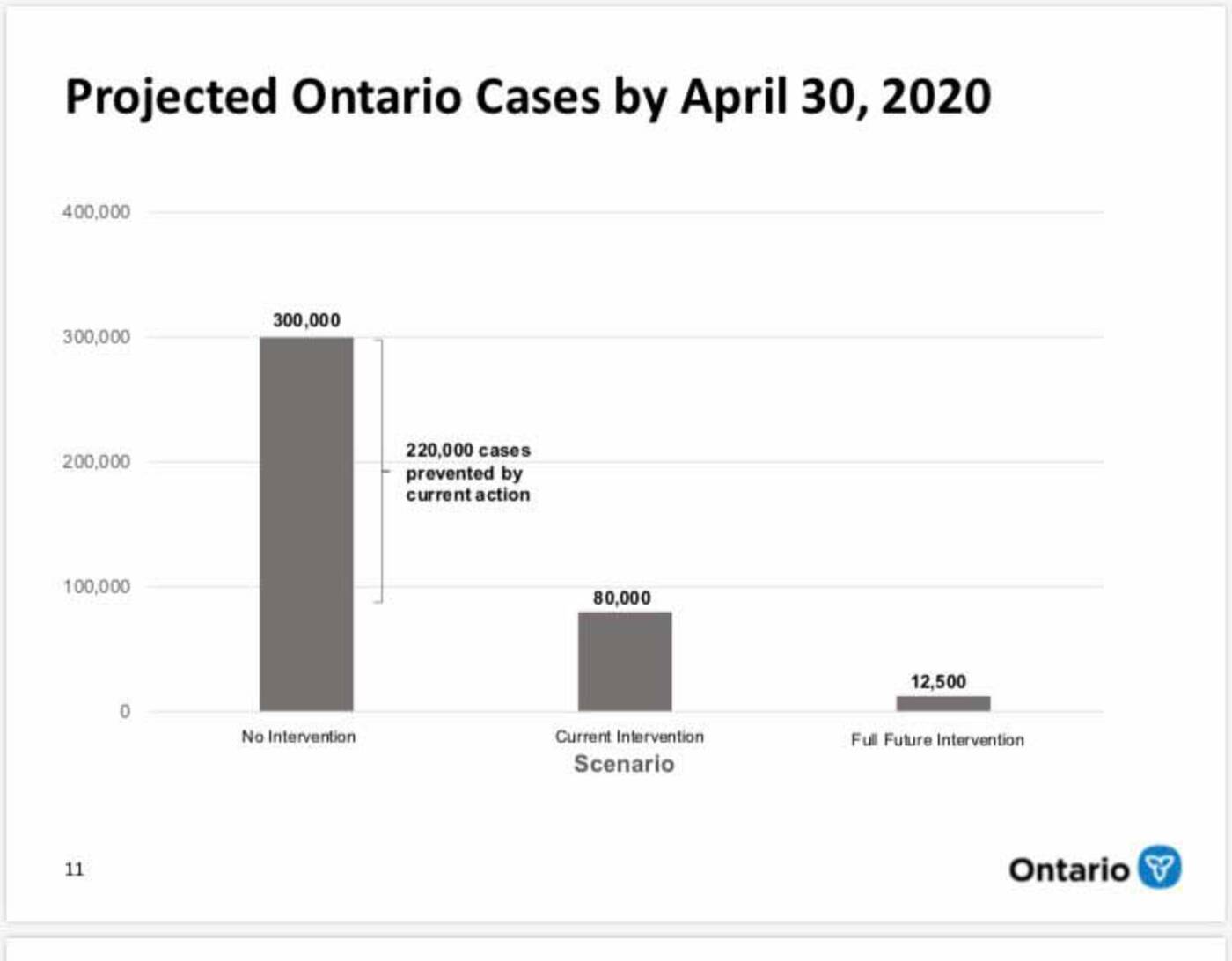 On a positive note, Dr. Donnelly revealed today that physical distancing measures taken by the Ontario government to date had already saved thousands of lives.

"Over the full course of this pandemic, which may last for 18 months or even two years... had we done nothing, Ontario may have suffered 100,000 deaths," said Donnelly. 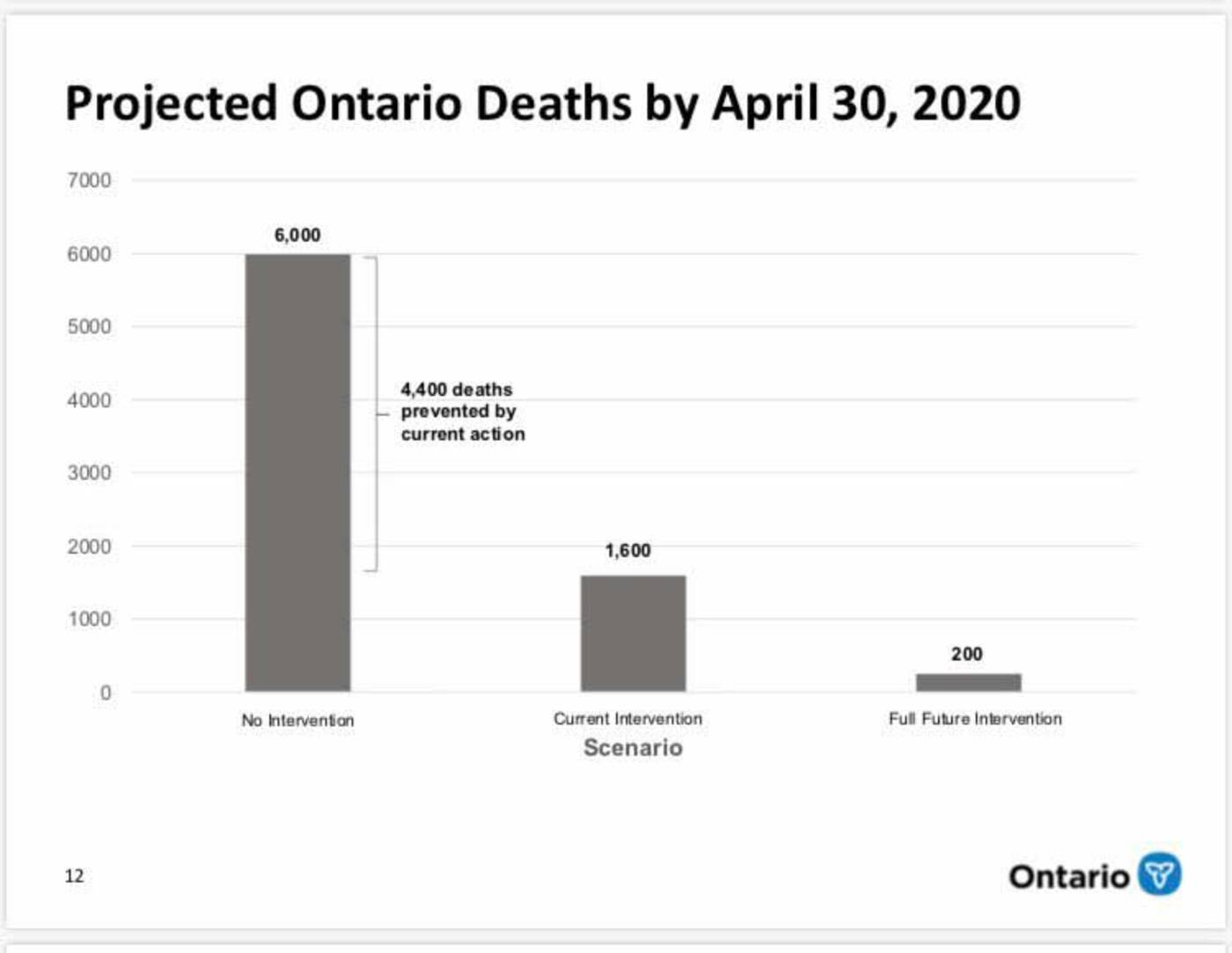 "Thankfully, that is not the position that we are in because of the very detailed actions... which have been taken in response to emerging science," said Donnelly.

As it stands now, Ontario public health officials are predicting anywhere between 3,000 and 15,000 deaths in total by the pandemic's end. This is with enhanced public health measures in place.

"If we follow the rules, social distance, look after the elderly and vulnerable in our society, we can get within that range," said Donnelly.

“That is not where we are, that is not what we believe is going to happen but that is why we needed to do all the things we’ve done thus far and it’s why we need to continue” - Dr. Donnelly, on the 100K death #, which projects what'd happen WITHOUT physical distancing pic.twitter.com/HFdtpB0bFM

"It is not possible to be exact about where we will end up," continued the doctor. "But I think it is reasonable to say that if we do everything that we can think of, everything that already has been done stays in place, all of the other measures that are being considered put in place, we could reduce the death toll."

Donnelly and his colleagues noted that "bearing down now" could not only save many lives, but the hard-hit economy by allowing life to go back to normal as quickly as possible.

Slide deck presented by Dr. Peter Donnelly projects even with expanded capacity, under the worst-case scenario Ontario runs out of ICU beds by April 14 - a week next Tuesday.
Best case with enhanced measures: ON never drops below 100 free beds.#Covid19ON #Covid19Ontario pic.twitter.com/0GO667Eion

Ontario is reporting 3,255 confirmed cases of COVID-19 across the province with 67 deaths as of April 2.

President of Ontario Health, Mathew Anderson, said during today's press conference on the models that we are already growing close to pushing our healthcare system beyond its current capacity.

"If we don not adhere to social distancing — if we do not contain this disease, it will grow more rapidly," he said.

"Fairly soon, in the April to early May timeframe, it will push beyond the capacity that we can bring — both ICU and the entire healthcare system."

Ontario Premier Doug Ford is expected to make an announcement related to the modelling data this afternoon at Queen's Park around 2 p.m.