Made just for walkers, joggers, and cyclists, this scenic 2.1-kilometre trail cuts through the Junction Triangle. 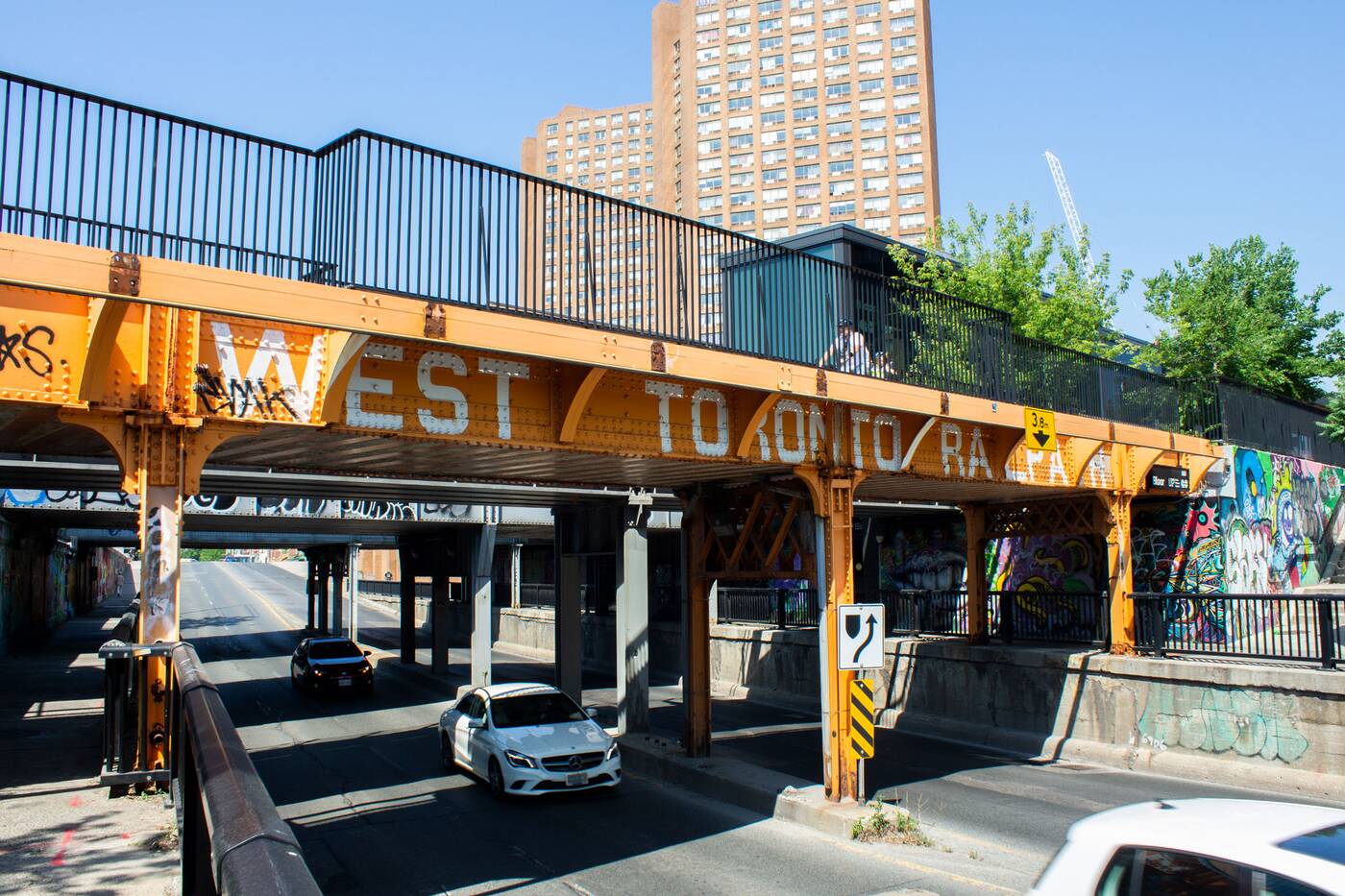 Both the Dupont and Bloor Street bridges are clearly demarcated as part of the West Toronto Railpath.

It runs down from Cariboo Avenue, just north of Dupont, and heads south along the GO Train rail corridor until Dundas Street and Sterling Road.

You can enter through a number of connectivity points (off Bloor, or the path behind Osler Fish Warehouse, or adjacent to Henderson Brewing, to name a few) to access this special asphalt trail. 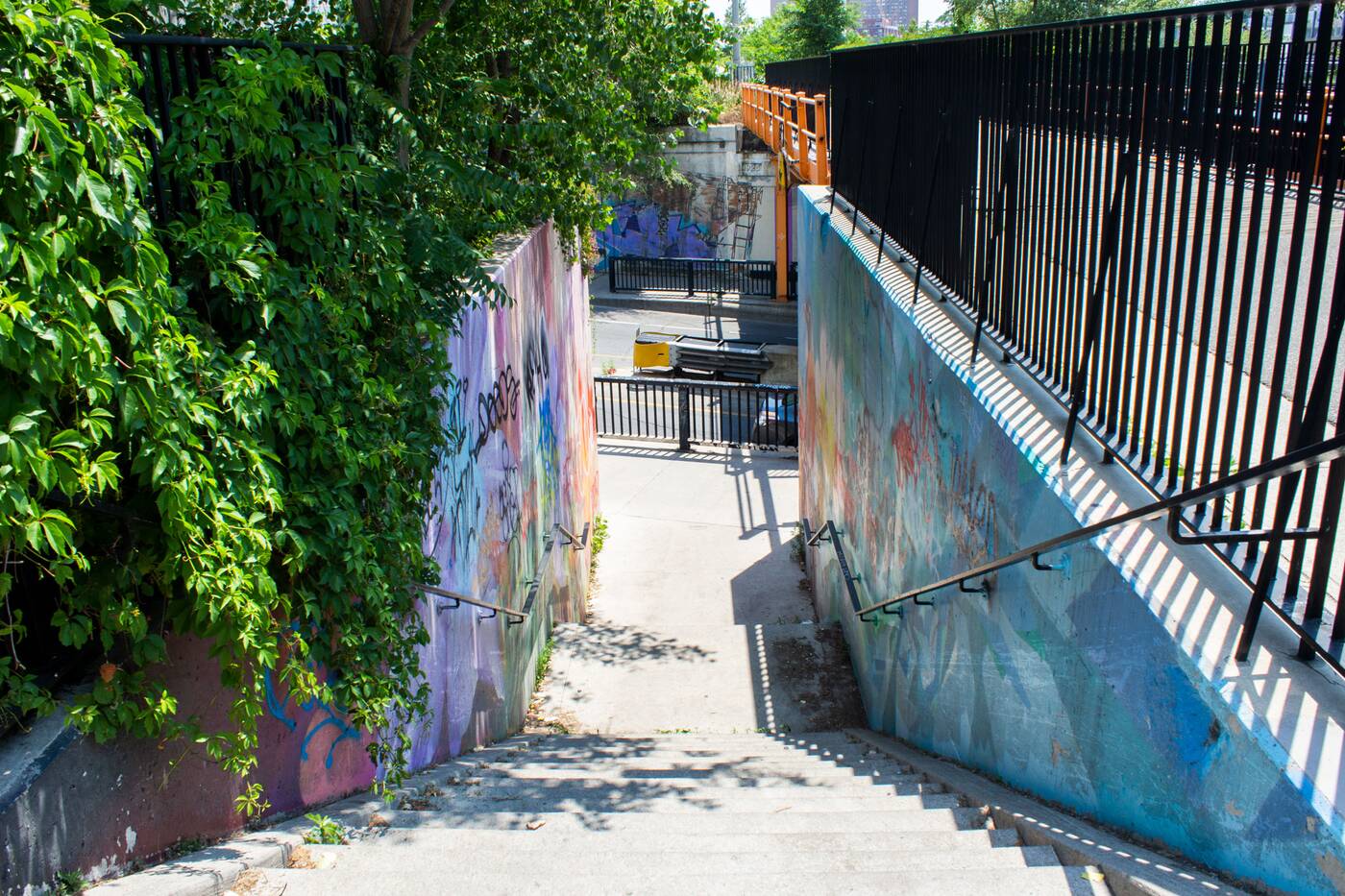 There are nine main entrances along the 2.1 kilometre trail.

The Junction Triangle has never felt particularly inviting to pedestrians, in large part due to the fact it's an area shaped by railway tracks, ongoing construction, and the remnants of old factories. 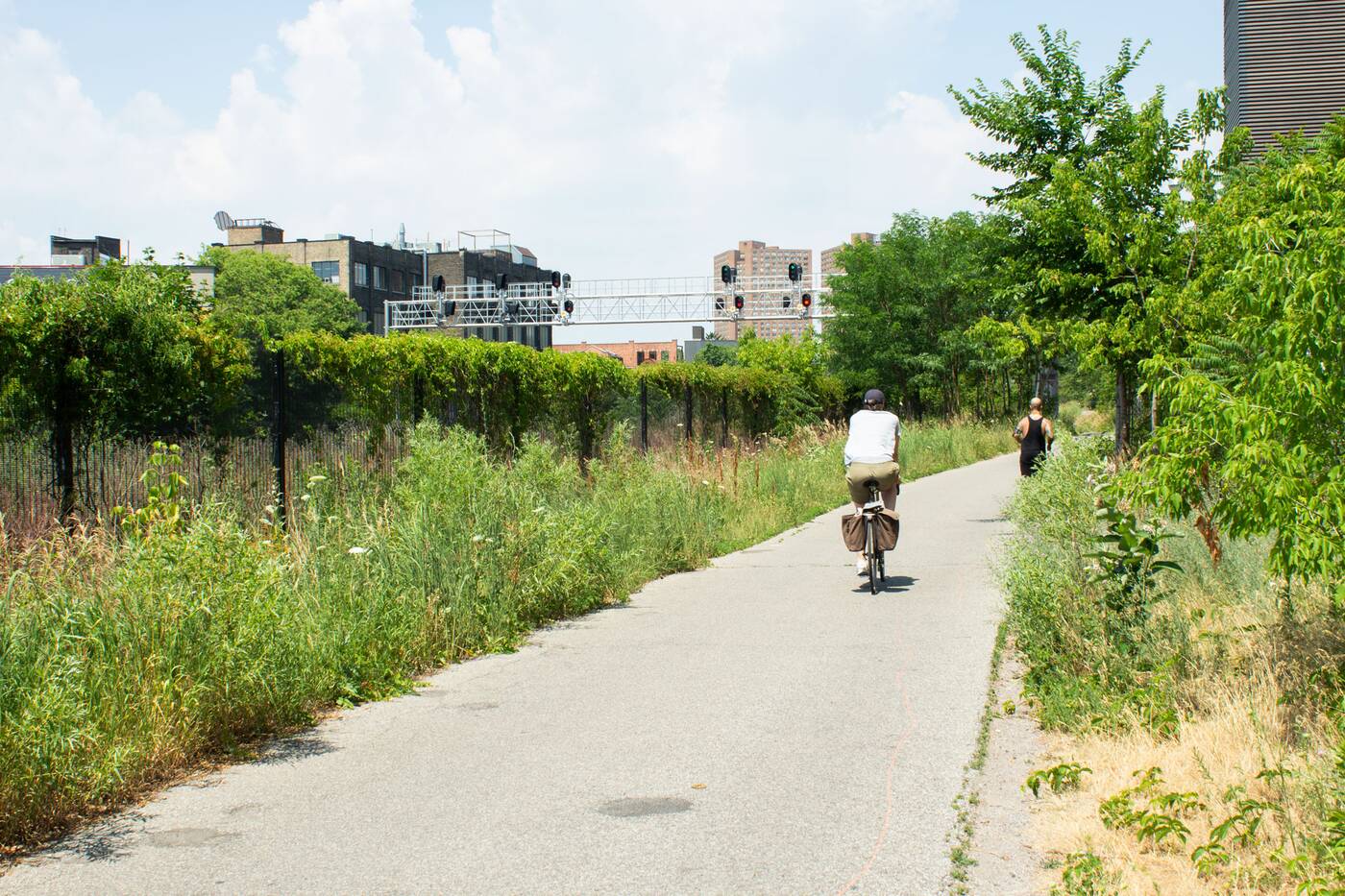 This linear asphalt path is a paradise for pedestrians and cyclists.

But on the WTR, the urban essentials — railways and bridges — come together against a backdrop of greenery and graffiti that shows Toronto's adaptive ecology at its best. 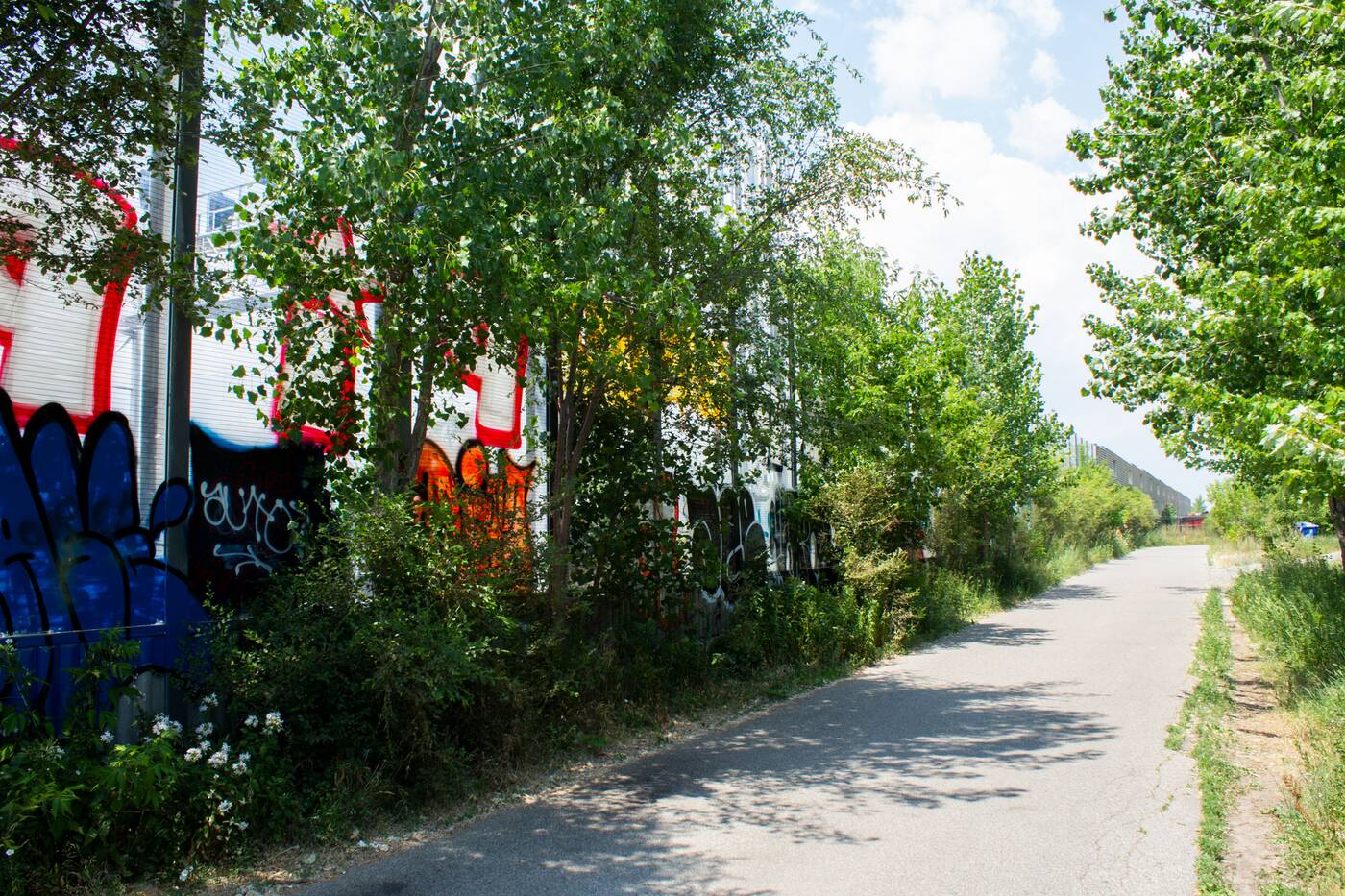 The WTR runs directly next to the GO train corridor.

The railpath was established in 2009, at a time when the Junction Triangle (or The Wedge, as some thought to call it, before the Fuzzy Boundaries project banged the gavel) was in its early stages of an identity renaissance. 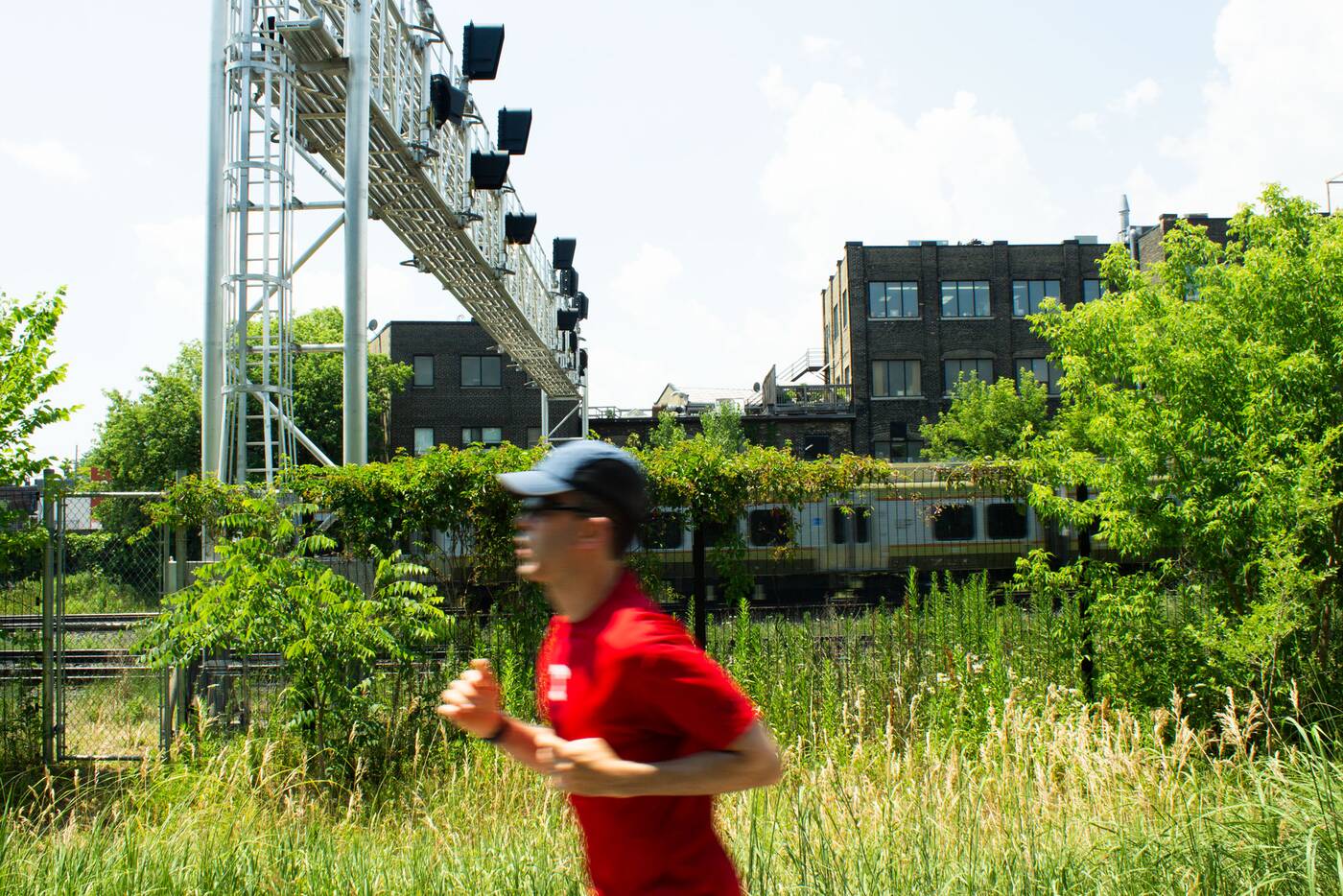 The occasional sound of trains passing by interrupts the peace and quiet of the trail.

Like the Beltline Trail, another rail-to-trail that uses railroad right-of-ways, the WTR runs on an abandoned line. A mere fence, and at times, graffiti-covered sound barriers, is all that separates commuters from the trains as they whizz by. 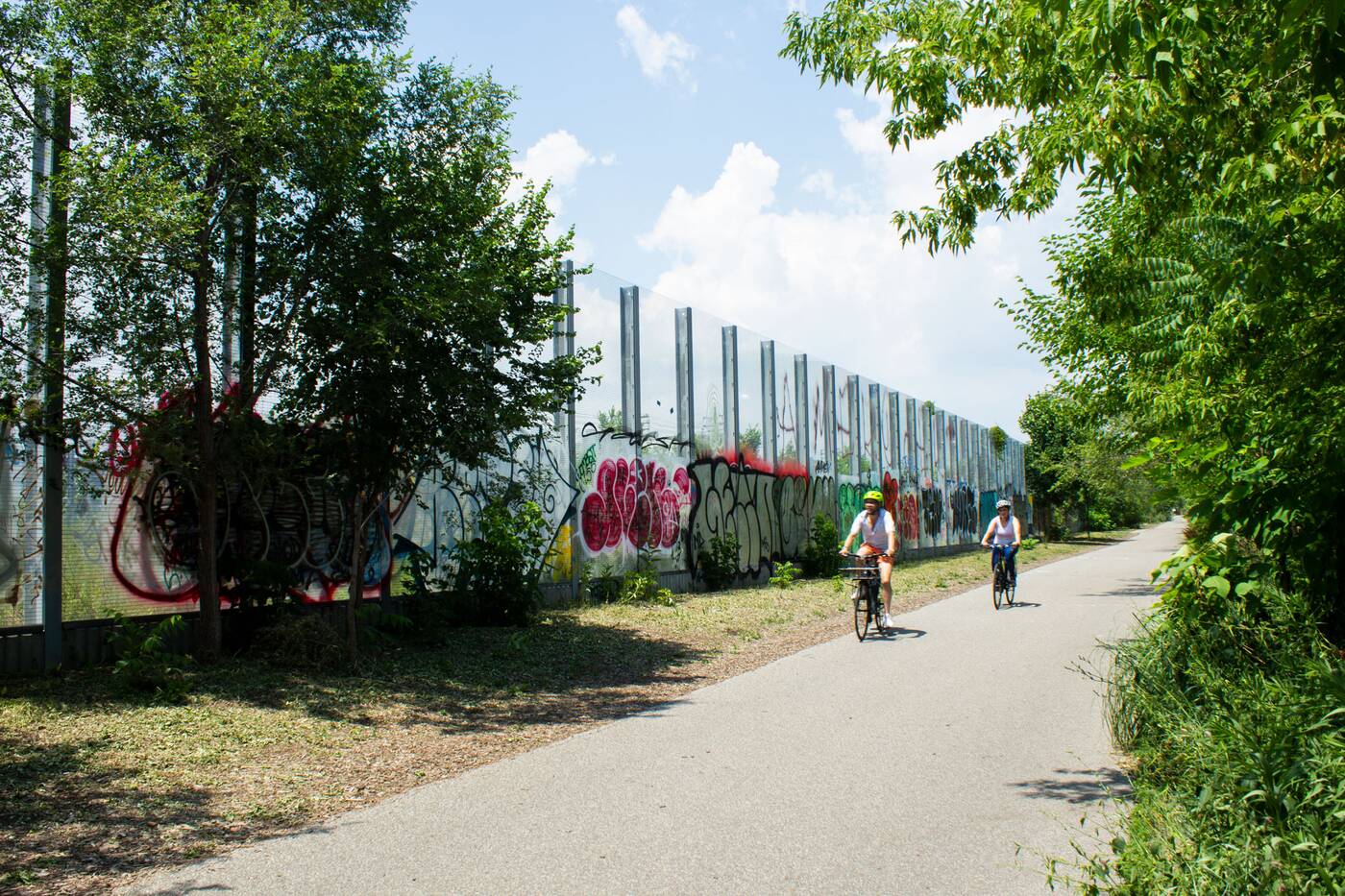 The trail was completed in 2009 and runs along an old railroad right-of-way.

Aside from the fact that it gets you efficiently from A to B (it's my favourite detour to all that Sterling Road has to offer), or the direct access to the Bloor GO and UP stations, the trail itself is a sight for sore city eyes. 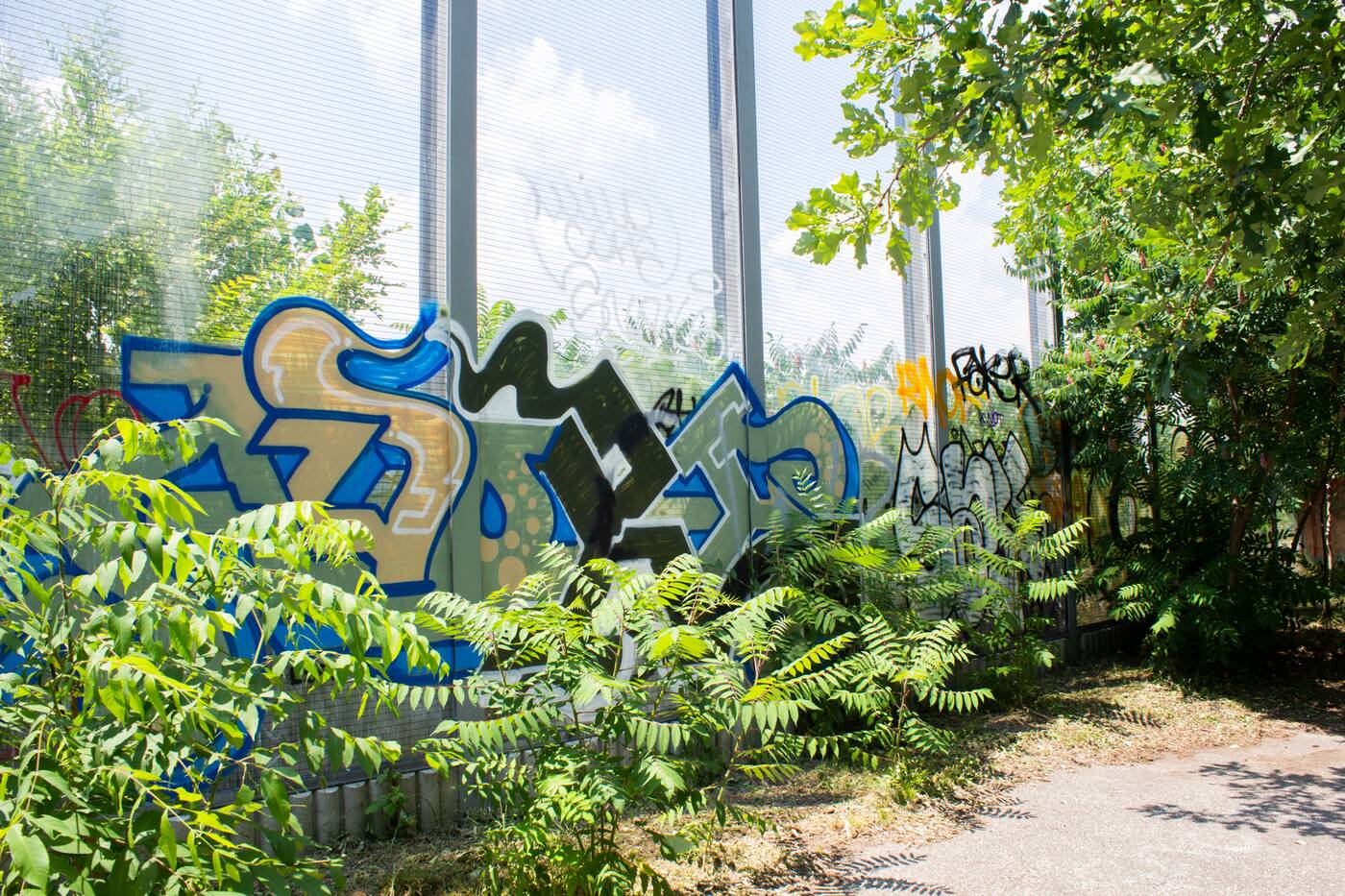 Graffiti is an essential part of experiencing this urban landscape.

For art in the wild, check for art by DeRAIL, StART, artists like Alexander Bacon and Que Rockford (you can watch a video on the duo's Dupont Street Underpass mural) and Lynnette Postuma (whose 12,000 square-foot Gradation wall pays hommage to the trees of the trail). 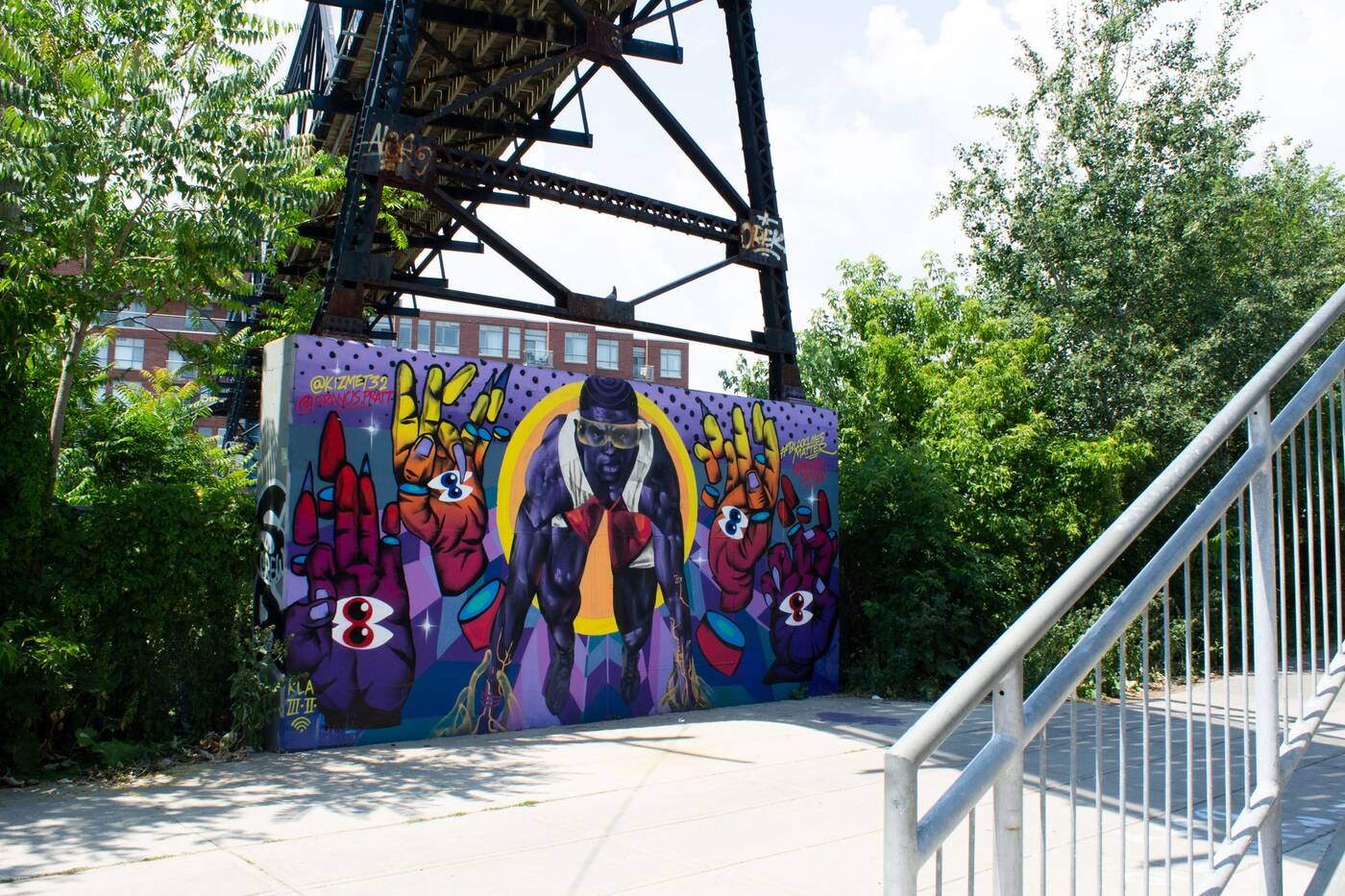 Several interdisplenary arts teams are responsible for the murals here.

The volunteer group Friends of the West Toronto Railpath calls it a "living canvas", which is an apt description of this changing trail.

The graffiti here is as as essential a component as the growth of the shrubs and sumach trees and vines of the path, and you'll find the artwork here shifting to match the zeitgeist. 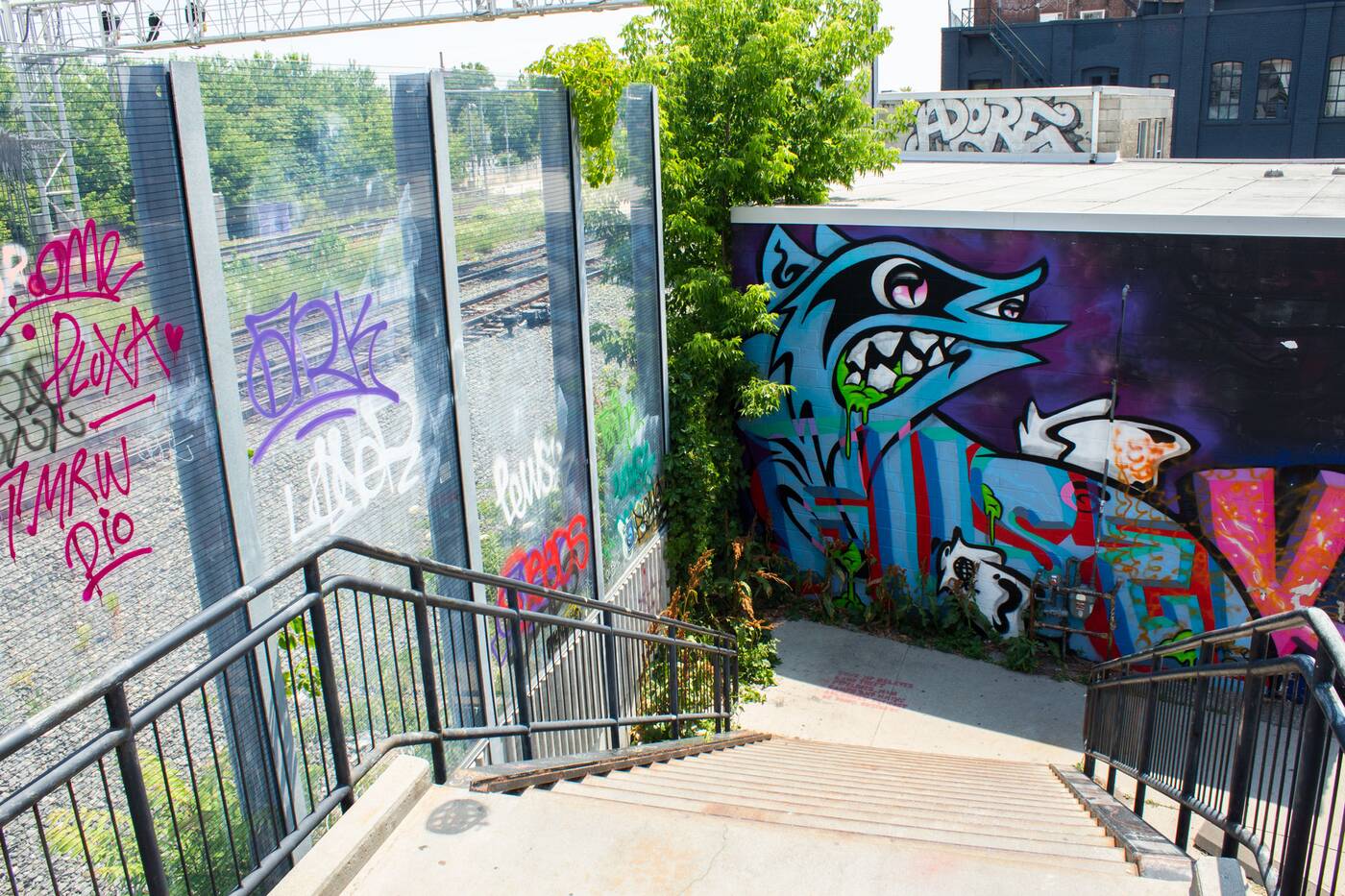 Here to stay are four sculptures made from galvanized steel placed along the length of the trail. These pieces by John Dickson range between five and six metres high as part of his project, Frontier. 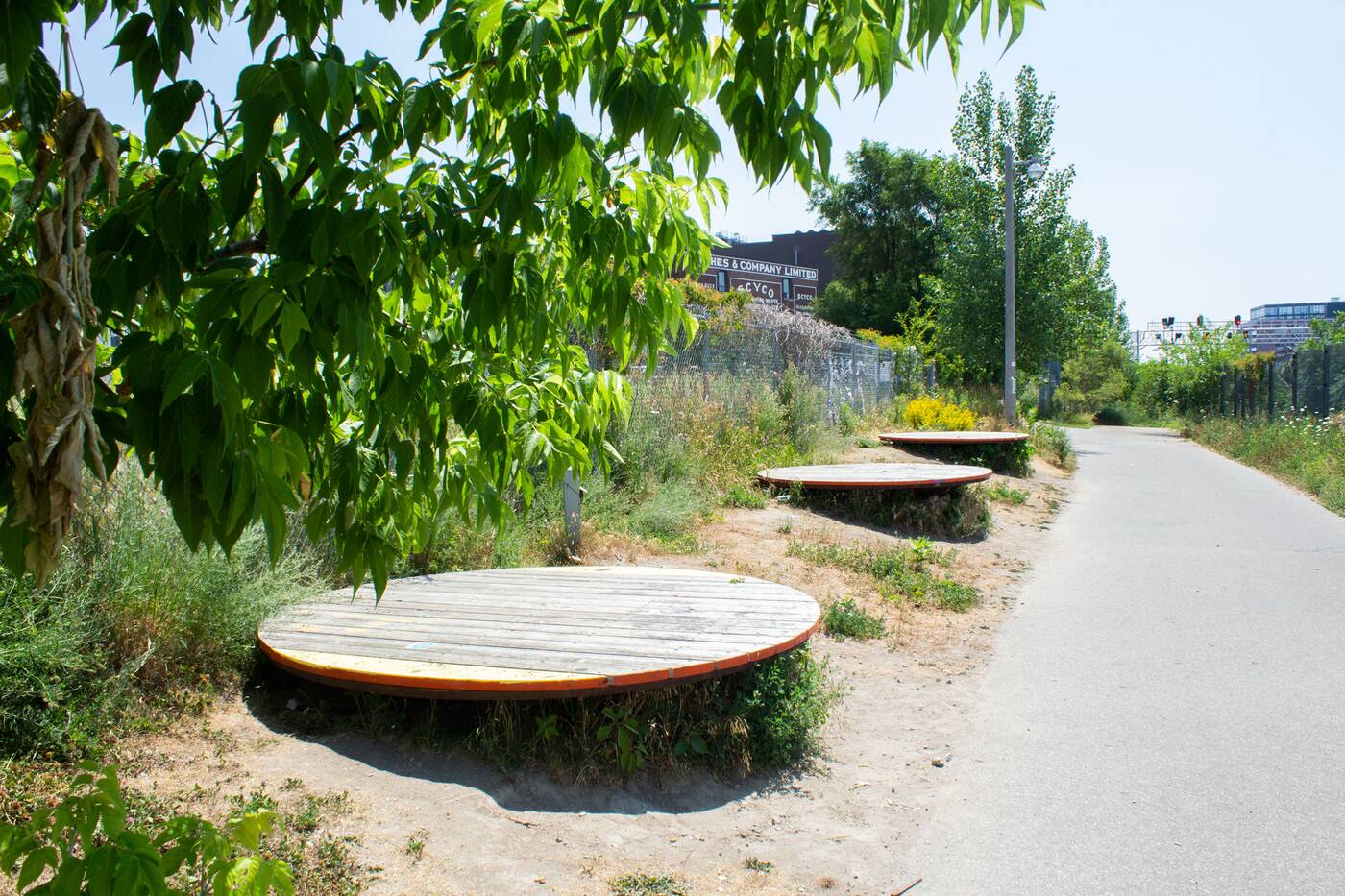 There is public seating interspersed along the trail, including these Pause Platforms. 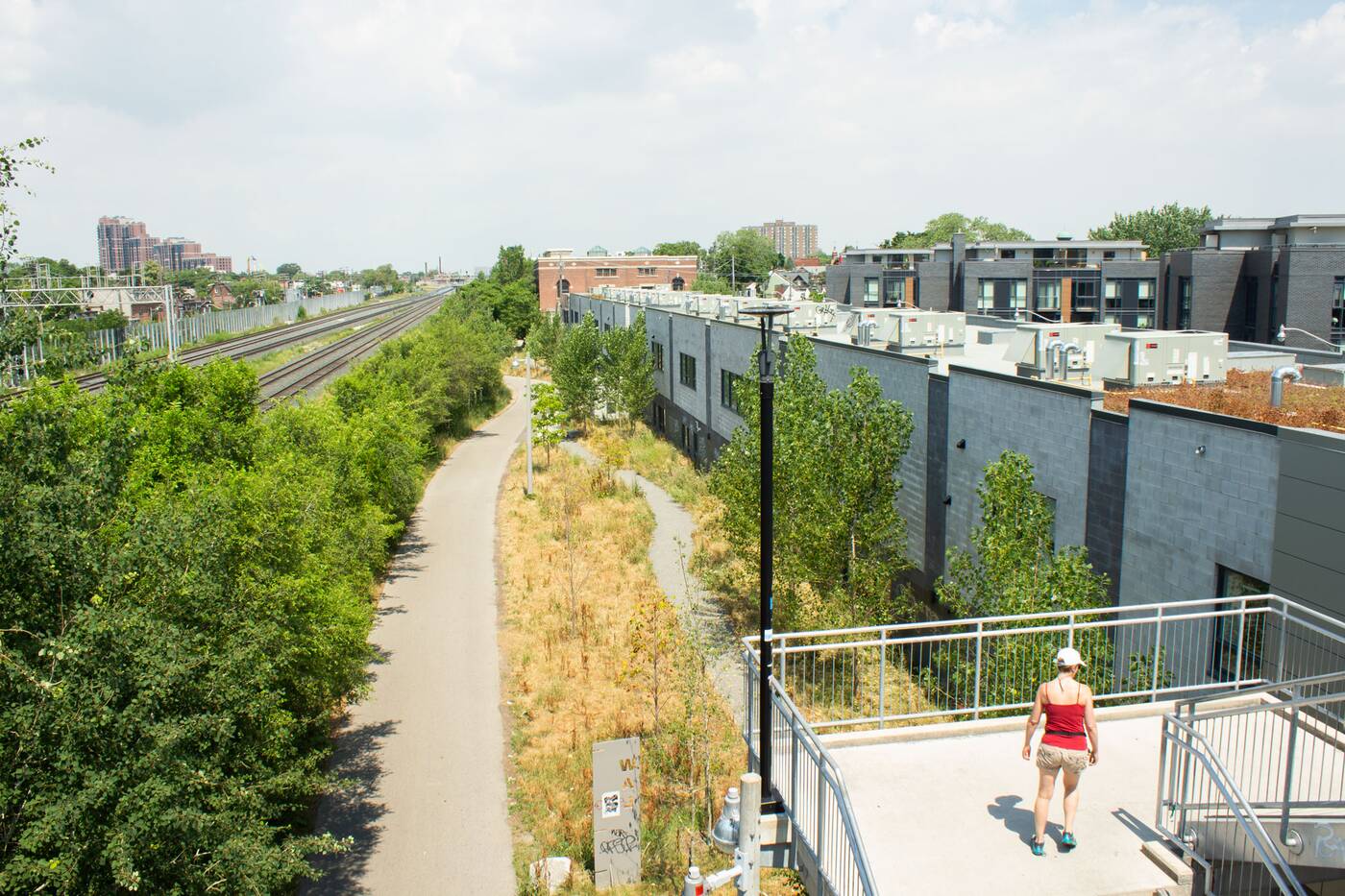 One pitstop you should definitely not miss out on is the walk across the Wallace Avenue footbridge: the first project by the Ontario Bridge Company.

Built in 1907, it was originally created as a low-cost, temporary crossing, but is now a historical landmark that provides an uninhibited view of the trains as they travel underfoot. 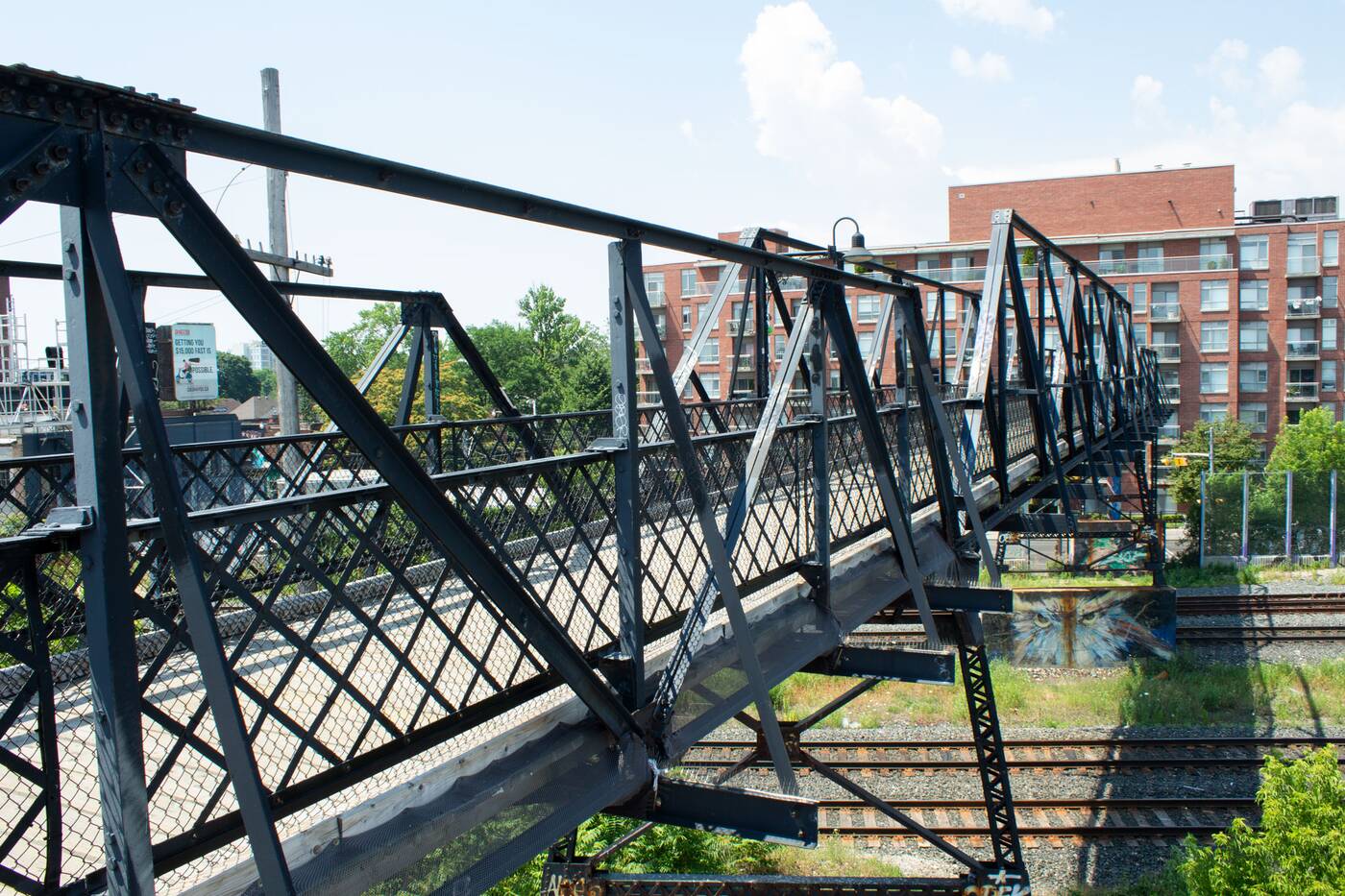 The Wallace Avenue footbridge was built in 1907.

Biking from north to south takes roughly 10 minutes, approximately, which is simply not enough to satiate most cyclists looking for an urban reprieve.

Phase 2 of the WTR has been a prolonged and painful (for eager pedestrians) process, promising an extension down to Abell Street at Sudbury Street. 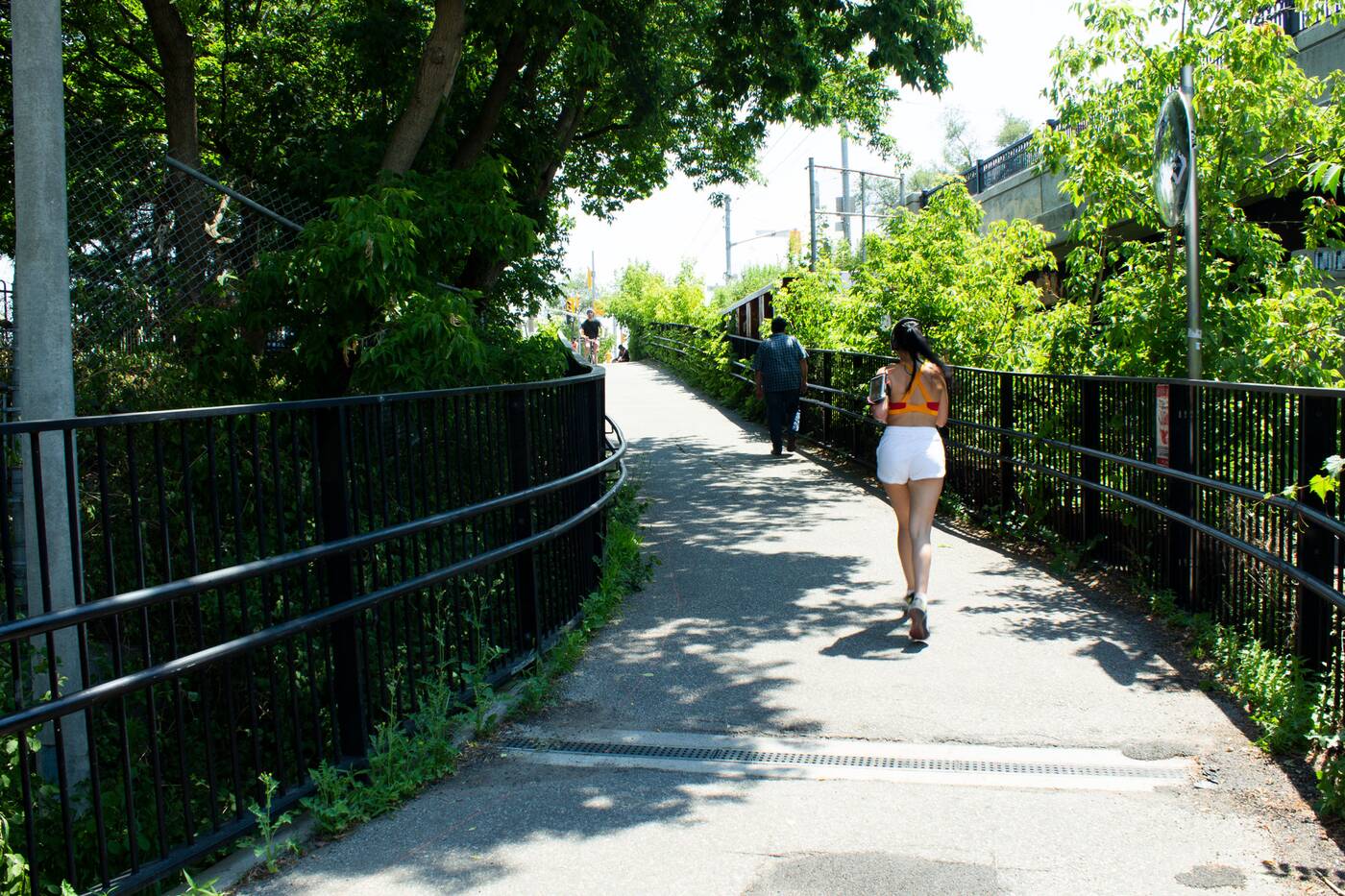 An extension of the WTR is expected to lengthen the trail south to Abell Street at Sudbury Street.

There was some movement made in February 2020 with the announcement of a $23 million plan that should introduce four new pedestrian-cycle bridges, connections to Dundas Street West, Lansdowne Avenue, Brock Street, and Queeen Street.

The project is slated to begin in 2021, if all goes according to plan. Until then, a little more than 2 kilometres will have to do. 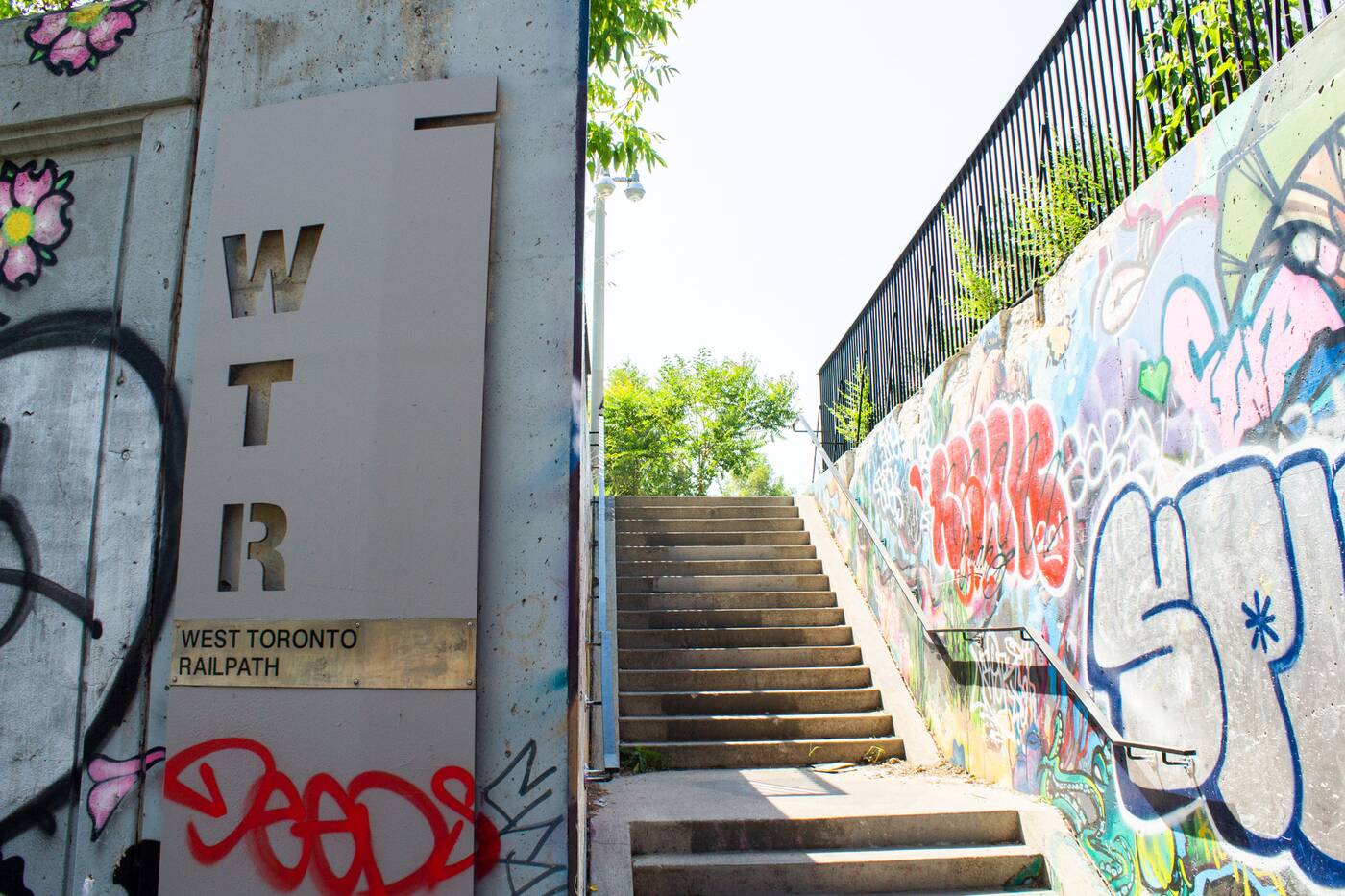