Homeless encampments continue to proliferate across the City of Toronto, with more and more tents popping up in public parks and squares by the day as vulnerable people seek safe spaces to live amid the pandemic.

Up to 2,500 people are now estimated to be sleeping within such encampments, from the newly-formed tent cities of Moss Park, Dufferin Grove, Allan A. Lamport Stadium Park and Trinity Bellwoods to various medians and green spaces alongside local roads.

The phenomenon isn't new — Toronto has been tearing down tent cities beneath the Gardiner Expressway and other major bridges for years now, despite vehement opposition from advocates who say the practice does more harm than good.

Never before, however, have we seen tent cities appear in such great numbers in so many public spaces across Toronto. It's unignorable and, to most people, completely understandable: COVID-19 has ripped through the shelter system in recent months, infecting more than 600 people who've stayed in city-run facilities since March. 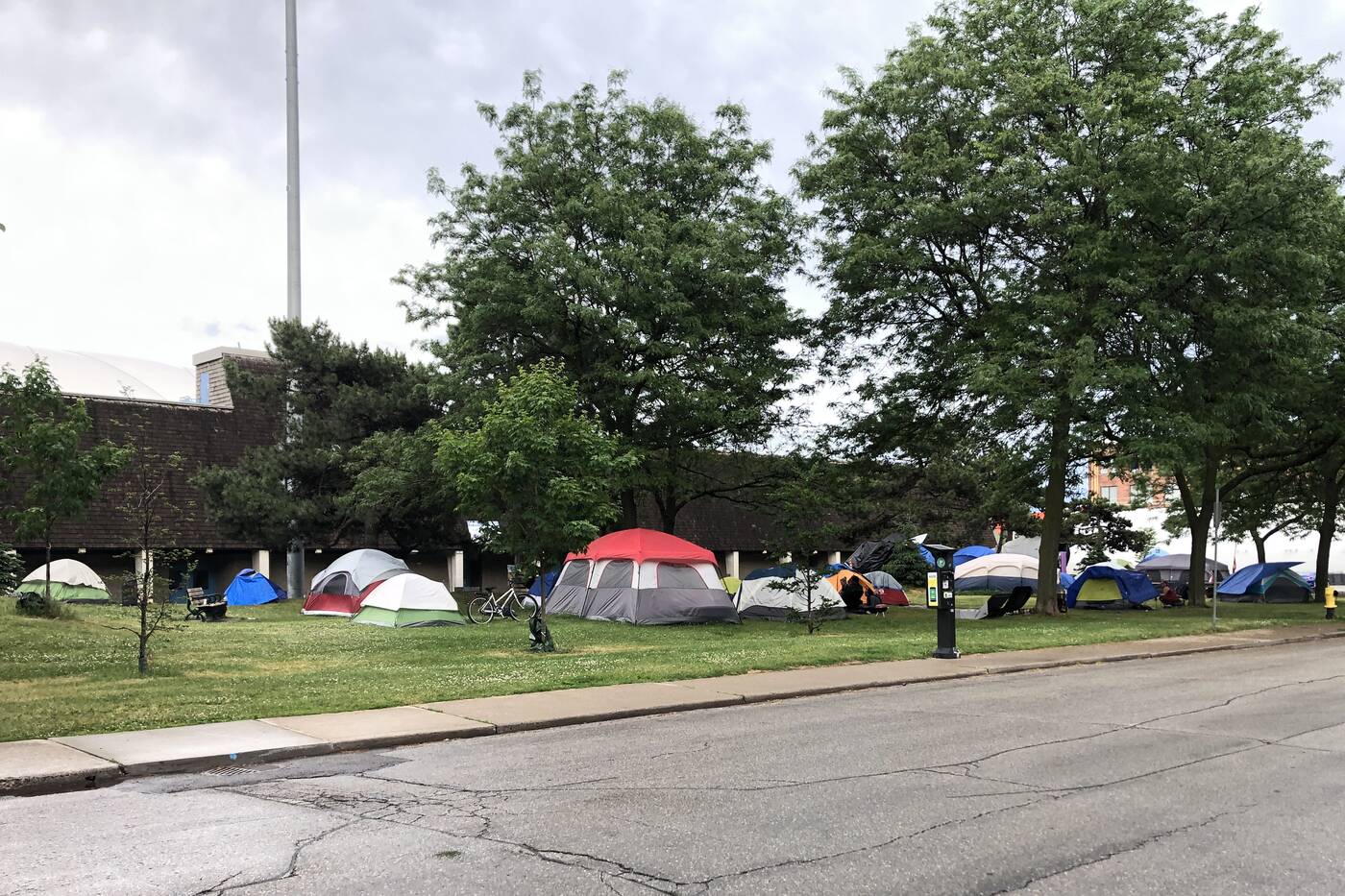 Dozens of tents have been erected in Allan A. Lamport Stadium Park next to Liberty Village's controversial new respite centre. Photo by Lauren O'Neil.

Strides have been made by city officials in terms of finding alternate accomodations for those living in dire circumstances right now, but activists say it's not nearly enough, arguing that more permanent, affordable rental housing is what's needed to combat the homelesssness crisis.

As it stands now, many individuals in the city have two options when it comes to sleeping at night: enter a potentially unsafe shelter, or erect a donated tent outdoors.

Ontario Premier Doug Ford says vulnerable people should do the former, because "you just can't" camp in a park.

Ford was asked this week duing a press conference for his thoughts on the sitiuation following the death of a woman from an apparent overdose at an encampment beneath the Gardiner.

"I understand you want to stay outside in a tent. It's probably better living quarters, but that's an ongoing issue," he said on Wednesday of the encampment residents. "Just don't hang out in the parks."

This dumb ass comment is what leads to pyschos burning down homeless encampments. Which HAS been happening. @fordnation any additional violence directed at the homeless encampments in Toronto is on you specifically #onpoli #cdnpolihttps://t.co/tfWeWfSdnb

Ford did acknowledge that he understands why people don't want to enter shelters — something he says has been an issue since he was a city councillor back in 2010.

"They don't like the shelters. They don't like staying there. They say some people get beat up. Their stuff gets stolen. They'd rather put a tent out in a park," said Ford.

The Premier didn't speak to the issue of outbreaks at shelters, or offer an alternate solution to those living at encampments, but it is of note that his government has pledged some $200 million for emergency shelter space in City of Toronto specifically.

@fordnation is asking Toronto homeless people to stop hanging out in parks and go to shelters (because those are just SO safe & comfy). I guess there will be a bunch of funding coming to build a bunch of new shelters, for the new wave of homelessness that's coming? #onpoli https://t.co/6dQebdNNqz

City of Toronto bylaws do prohibit anyone from dwelling, camping or lodging in a city park.

"Unless authorized by permit, no person shall place, install, attach or erect a temporary or permanent tent, structure or shelter at, in or to a park," reads Chapter 608 of the Toronto Municipal Code.

What's apparently more importantly to Ford, however, is that encampments just look bad.

"You can't be doing it underneath the Gardiner. It looks terrible. We have tourists from around the world, not now, but when we did before," he said to reporters on Wednesday of the tent cities. "You know, you just can't do that."