A new cannabis store is being proposed for Kensington Market, and some local residents are fighting against what they see as dispensary overload in the neighbourhood.

More than 600 e-mails and signatures were collected over the weekend in support of banning The Kensary: a yet-to-open weed store currently waiting to get its cannabis retail license approved by the Alcohol and Gaming Commission of Ontario.

There's not much information about The Kensary available online except that the brand has two Toronto stores in the works, both of which are awaiting the AGCO's go-ahead.

"The Kensary is not the problem, The Kensary is just a needle in the haystack," said Casey Anne Summers, a Kensington resident spearheading the campaign.

Summers, who has lived in the Market for eight years and has worked in the cannabis industry for more than 15 years (including at Vapor Central and HotBox), says the issue isn't with the cannabis stores but with the number of them in one neighbourhood.

Since seeing the AGCO licensing poster outside of 80 Kensington Ave., she has been rallying locals and other supporters of the neighbourhood to file an objection against The Kensary's AGCO application, and other 'Big Canna' shops.

"We don't want our community overrun by dispensaries," said Summers. "We want to keep the fabric of our community from being bought out. Small businesses are what makes Kensington special."

Summers points to other cannabis brands that have popped up in the neighbourhood over the last year, like One Plant, the controversial store that's now open for business where Fairland Grocery used to be. 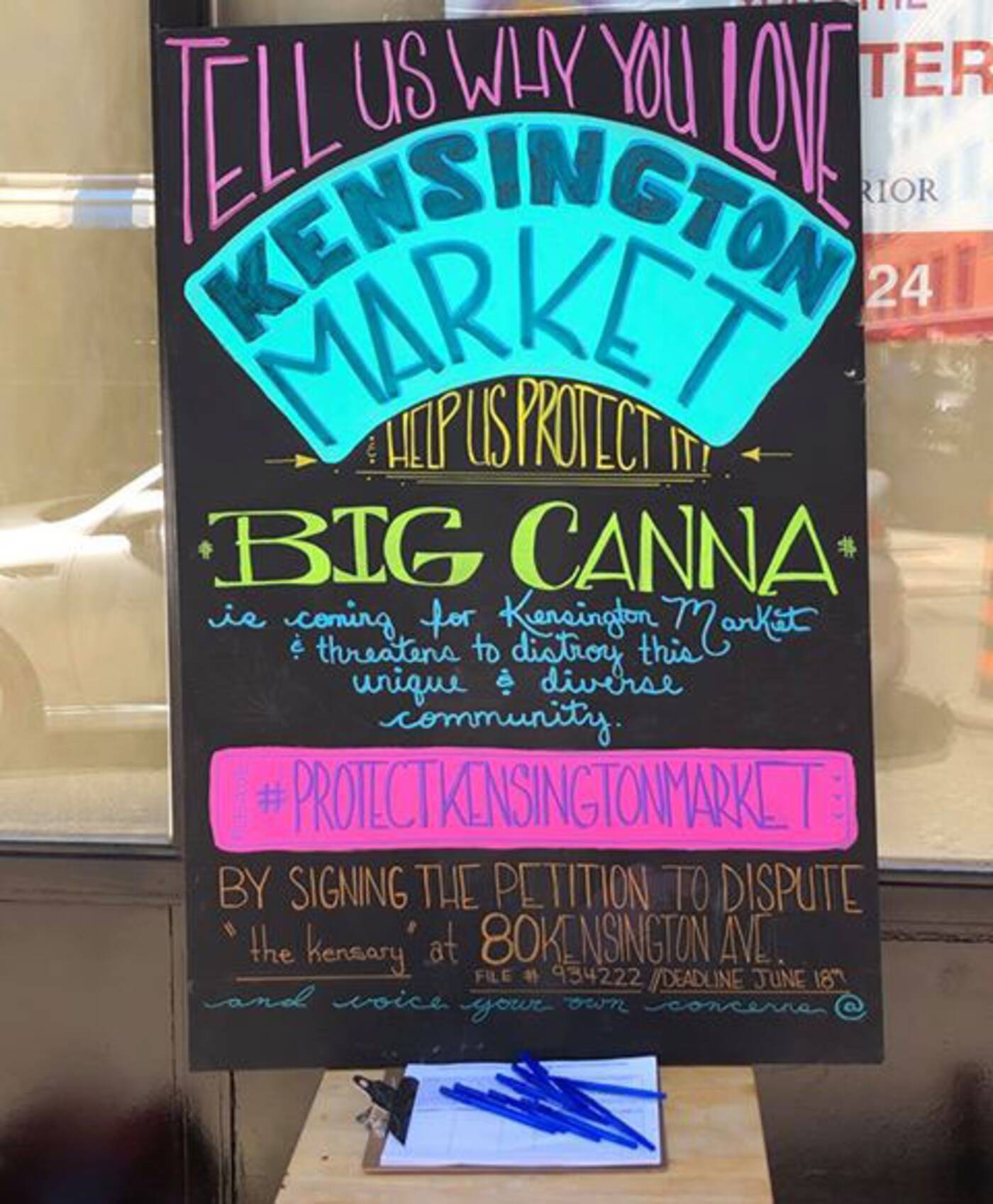 Kensington Market resident Casey Anne Summers collected over 600 signatures over the weekend for a petition to dispute the opening of weed store The Kensary. Photo via Jillian Keywan.

There's also an outpost of the massive Edmonton-based brand Fire & Flower, which is neither open for business nor up for authorization by the AGCO, but still occupies an empty storefront on Baldwin Street where Eden Hall used to be.

"We know there's a big change coming but we don't want it to be all cannabis retailers," says Summers.

On Tuesday, local community organization Friends of Kensington Market (FOKM) extended an invitation to Premier Doug Ford and Mayor John Tory to take a walk through of the neighbourhood so that they could better see the impact of what too many cannabis retail stores would do to the area.

"It's not just a destination for people who want to shop for cannabis," says FOKM board member Sylvia Lassam. "Kensington Market has always been an incubator for small, interesting businesses."

"We don't care if people get high...but it has economic repercussions. The people who run cannabis stores can pay a huge amount of rent. It creates an unrealistic expectation among property owners."

Like the number of bars permitted on the Ossington strip, Summers and supporters are calling for a legal cap to the number of legal weed stores allowed to open in one neighbourhood.

There are no current laws for this in Ontario: following the loosening of rules around the number of pot shops allowed to open in the province, specific areas in Toronto like the Annex and Queen West have seen a large portion of the applications.

Cabbagetown has recently seen a push against the opening of yet another legal weed store, where there are already three dispensaries located on Parliament Street.

There's no online petition for capping the number of cannabis shops in one neighbourhood yet, says Summers. Right now, she says the only thing communities can do is to file objections against individual license applications on the AGCO website to stop them one by one.