Ontario will officially reveals plans for Stage 1 of reopening its economy on May 14 and many are wondering what exactly that could look like.

According to the Framework for Reopening our Province document released late last month by the Ontario government, we are getting closer to moving past Phase 1 (noted in scary red), which involved responding directly to the immediate threat of the virus.

Next up is Phase 2 (orange), which surrounds restarting the economy. Phase 2 includes three substages that demarcate the gradual reopening of the province.

"The government will take a careful, stage-by-stage approach to loosening emergency measures and reopening Ontario’s economy," reads the document. "Public health and workplace safety will remain the top priority, while balancing the needs of people and businesses." 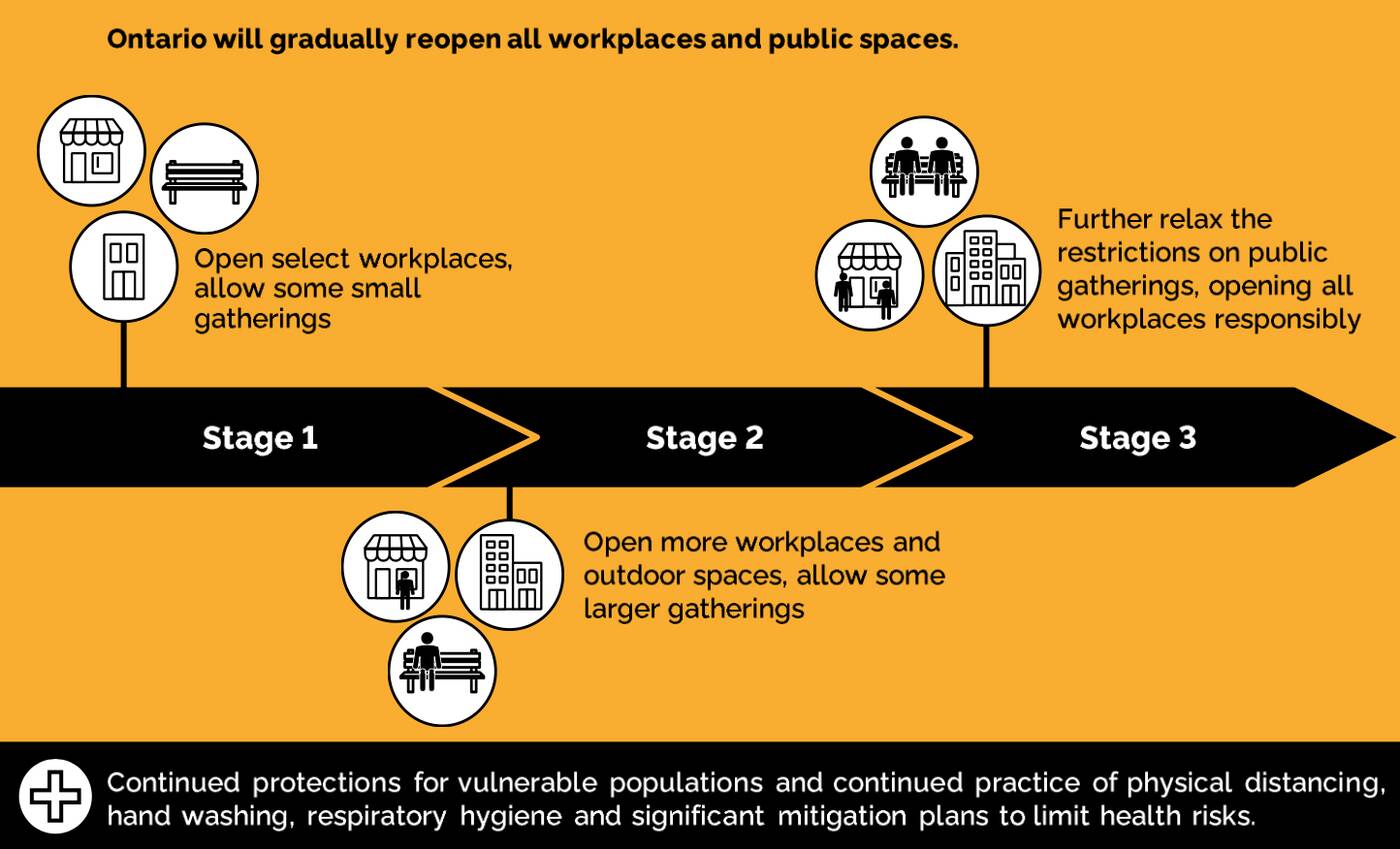 Stage 1 of Phase 2 involves opening up select workplaces and outdoor spaces, plus allowing for some small gatherings. Image courtesy of the Province of Ontario.

The first stage involves opening select workplaces—specifically ones that can comply with health and safety regulations—and some outdoor spaces. Some small gatherings may also be allowed.

Workplaces that can comply with health and safety regulations and some outdoor spaces will be allowed to reopen in Stage 1. Image courtesy of the Province of Ontario.

The proceeding stages expand on Stage 1, allowing for more workplaces and public spaces to reopen, and some large gatherings. Eventually all workplaces will be allowed to reopen responsibly.

"Public health officials will carefully monitor each stage for two-to-four weeks, as they assess the evolution of the COVID-19 outbreak to determine if it is necessary to change course to maintain public health," it continues.

The document notes that after each two-to-four-week period, the Chief Medical Officer of Health may advise to:

Many businesses including non-essential retailers were allowed to reopen for curbside pickup this week, as well as several industry sectors and parks across the province.

It has not been stated which workplaces will reopen during this stage, but major retailers inside of malls have begun developing plans to welcome back customers and chains like Tim Hortons have outlined plans to reopen dining areas inside of restaurants.

Golf courses in Ontario and off-leash dog parks in Toronto are also set to reopen soon while Premier Doug Ford has told businesses to "get ready" to reopen.

But Ford has also remained adamant that a consistent downward trend in new cases is still needed before moving forward with lifting restrictions, and doing so will be made at the discretion of health officials.

"As public health measures are lifted and as economic activity resumes, the public will need to continue to maintain physical distancing and hand washing, along with self -isolation when experiencing COVID-19 symptoms," it reads.

"By taking this incremental approach, the government can ensure there are appropriate measures in place to reopen the province safely and limit any risks to people and public health."

Eventually Ontario will arrive at the happy green Phase 3, which focuses on recovery and adjusting to "the new normal." It will take time but we'll get there.