Some of Toronto's busiest bus routes could soon see a dramatic rise in speed and reliability, much like the streetcars along King Street did after a successful transit priority pilot led to the permanent restriction of car traffic and parking along the busy commuter thoroughfare.

The TTC released a new "5-Year Service Plan & 10-Year Outlook" on Wednesday detailing its goals for better delivering transit services from 2020 to 2024 "and beyond."

"The TTC's ridership is expected to increase by 35 million riders by 2024," reads the report.

"This document is our blueprint for delivering the transit services our City needs to accommodate projected population and employment growth over the next five years."

Developing more reliable and more frequent service is obviously a huge priority for the transit agency as overcrowding regularly continues to choke out major commuter routes.

The expected launch of Line 5 (the Eglinton Crosstown LRT ) in 2021 should help in that regard, as will scheduled improvements along Line 1 and the addition of Line 6 to the system.

It won't be enough, however, according to TTC brass, as some 70 per cent of all trips on the TTC network include either a bus or a streetcar. 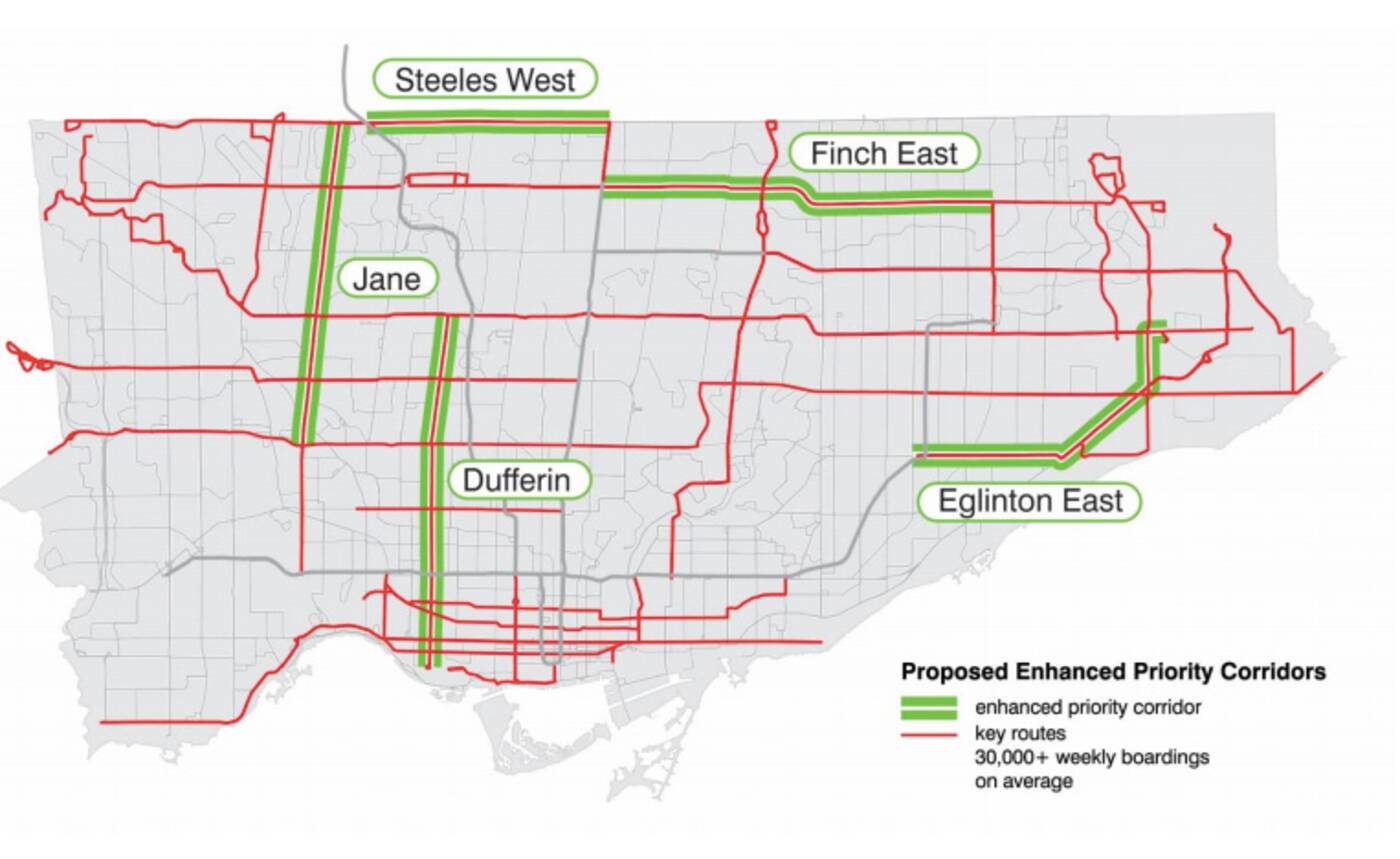 "The surface transit network [is] critical to access and mobility in Toronto," reads the report, which later notes that TTC operates "the most heavily used bus corridors in Canada and the U.S."

Unfortunately, as Toronto's population grows, so too does the amount of traffic on its streets — a problem that "has largely impacted service reliability of heavily-used bus and streetcar routes on busy streets."

"Traffic congestion not only affects transit service reliability, but has an impact on the overall quality of life, health, safety, and regional economy," writes the TTC in its 5-year plan, which identifies "prioritizing surface transit" as one of its five "pillars of opportunity."

Bus only lanes are the most cost effective method to quickly improve transit service and move more transit riders faster. Implementing this would be great! #topoli https://t.co/5Fr7dQPK7I

In an effort to alleviate some of this problem, the TTC wants to test out five new surface transit priority corridors along Dufferin Street, Jane Street, Eglinton Avenue East, Steeles Avenue West and Finch Avenue East.

"Given the success of the King Street Transit Priority Corridor, we will explore implementing exclusive bus lanes, stop consolidation, all-door boarding and other transit priority measures to speed up bus service on Toronto's busiest bus corridors," reads the TTC's plan.

These explorations are set to happen sometime within the next five years and could be expanded beyond the five major streets identified.

The TTC is also installing a "streetcar queue jump lane" on Lake Shore Boulevard at the Long Branch Loop, and plans to install up to three new queue jump lanes each year moving forward.

Five of these lanes already exist in Toronto and allow buses and streetcars to bypass cars at traffic signals.

"The success of the King Street Transit Priority Corridor has improved speed and reliability for the busiest surface transit route in Toronto," notes the TTC of its plan to prioritize surface transit over the next five years.

"But there is more that can be done."