Long-awaited pedestrian bridge to be hoisted in Toronto this weekend

A sophisticated, stainless steel bridge is set to be erected in downtown Toronto this weekend over the pesky train tracks that currently separate Liberty Village from King Street West.

It's a bridge that residents on both sides of the Kitchener/Milton Rail Corridor have been expecting for years — one that will finally allow pedestrians and cyclists to access Liberty without having to go all the way around to Strachan or Atlantic.

On Sunday, after countless delays and more than eight years after it was first approved by City Council, the King-Liberty Pedestrian/Cycle Bridge will finally come together. Like, literally.

Construction of the new King-Liberty bridge is well underway. It will provide a much-needed accessible connection for pedestrians and cyclists over the rail corridor between Western Battery Rd and King St W/Douro St.

The 55-metre-long bridge, while ready to hoist, was actually constructed in two parts according to Metrolinx, which is not leading the project (that would be the City of Toronto.)

"The King-Liberty Bridge will require two large spans to be matched up while suspended by cranes and then bolted together before being put into place," reads a Metrolinx blog post announcing the installation. "It's an engineering dance done in mid-air."

As a result of this super-cool bridge dance, Metrolinx is closing off the rail corridor on Sunday, September 15, from 2 a.m. until 8:30 a.m.

"Crews will be working in a very short period of time and to overcome this challenge, the bridge has been previously fitted together off-site to ensure a perfect fit," said Metrolinx' third party projects officer Dean Bragg in the aforementioned blog post. 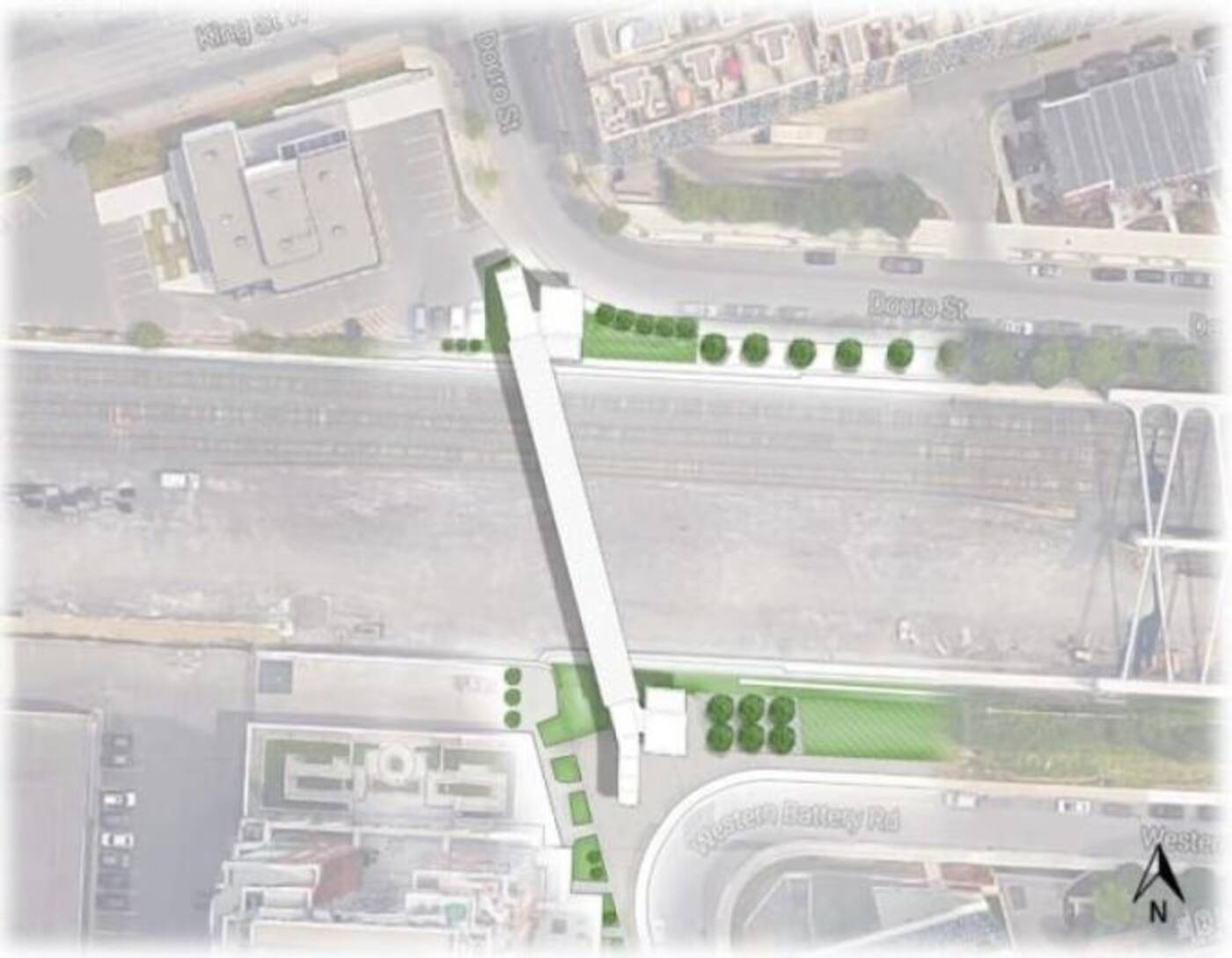 The King-Liberty Pedestrian/Cycle Bridge run between Western Battery Road in Liberty Village and Duoro Street in the King West neighbourhood. Image via City of Toronto/Metrolinx.

GO buses will fill in the gaps early Sunday morning, for the most part, but UP Express customers are advised to leave themselves plenty of extra time to get to Pearson either way.

Sadly, despite the hoisting of its spans this weekend, the new King-Liberty bridge won't acually be open to the public until spring of 2020 (unless it's delayed again).