Vegan activists protest at one of Toronto's favourite butcher shops

The sidewalks of downtown Toronto were rammed on Saturday as citizens emerged from their hibernative states to enjoy the year's first truly warm-ish, sunny day — and animal rights activists were ready for them. 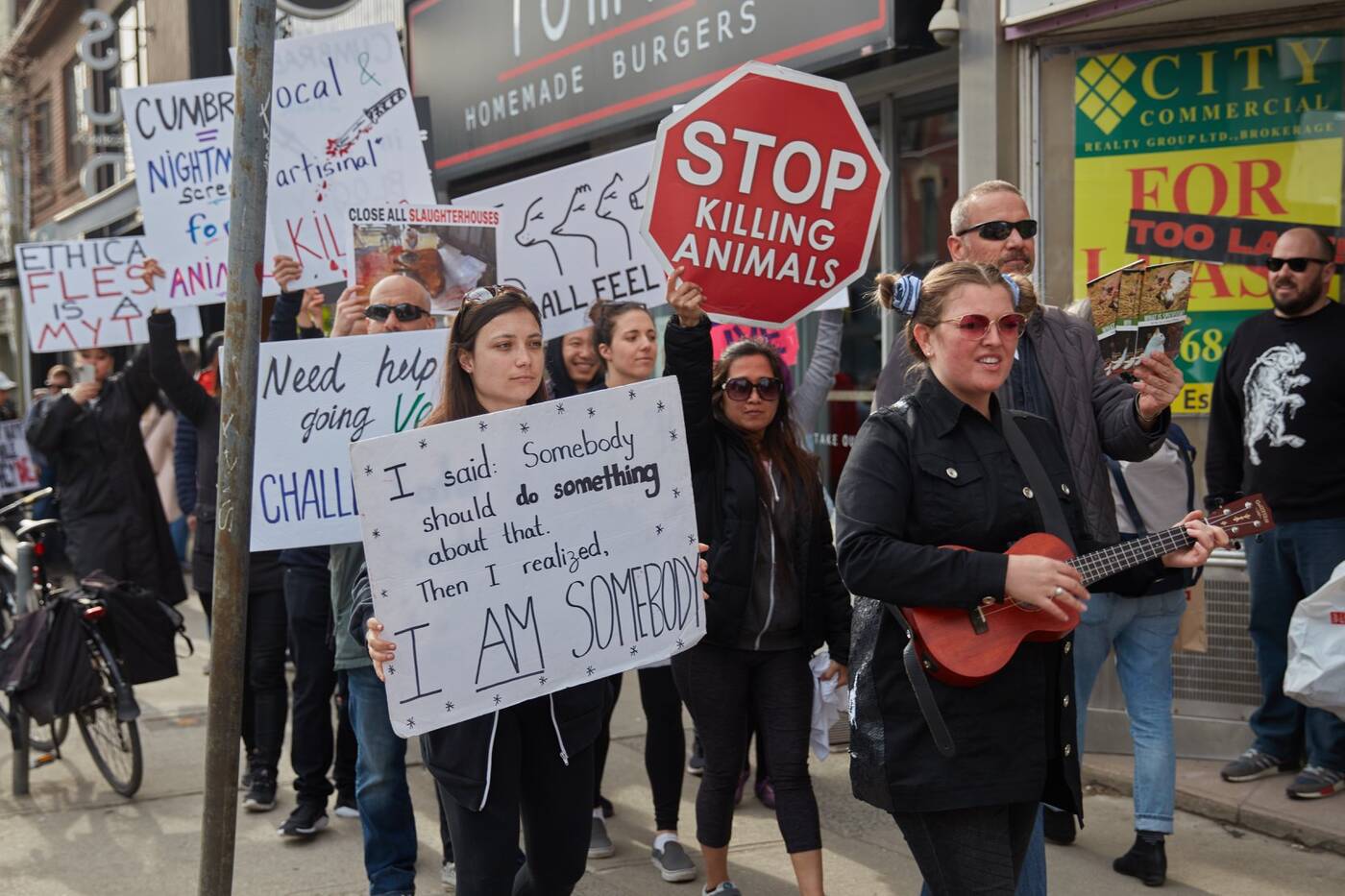 Demonstrators stood up for the rights of farm animals on Saturday in downtown Toronto. Photo by Julius Sandor.

The protest was well-attended by activists, curious shoppers and police, who watched over the group and ensured crowd control along the bustling strip. 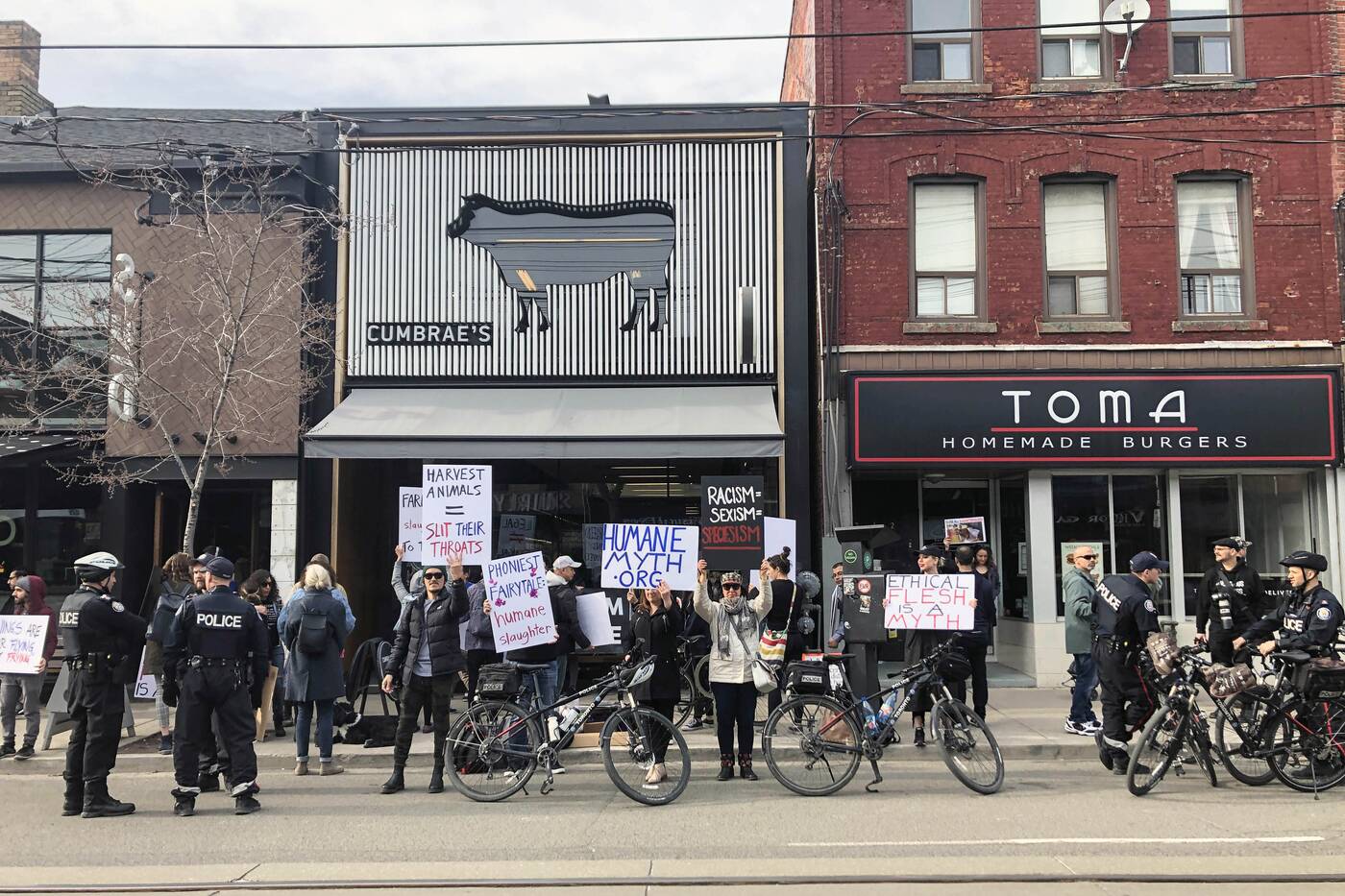 The peaceful protest was large enough to gum up sidewalk traffic. Photo by Lauren O'Neil.

Protest organizers say that a staff member at Cumbrae's had complained to police, but that an officer told them "these activists are great, we don't ever see them doing anything wrong" and that "it's their right to be here." 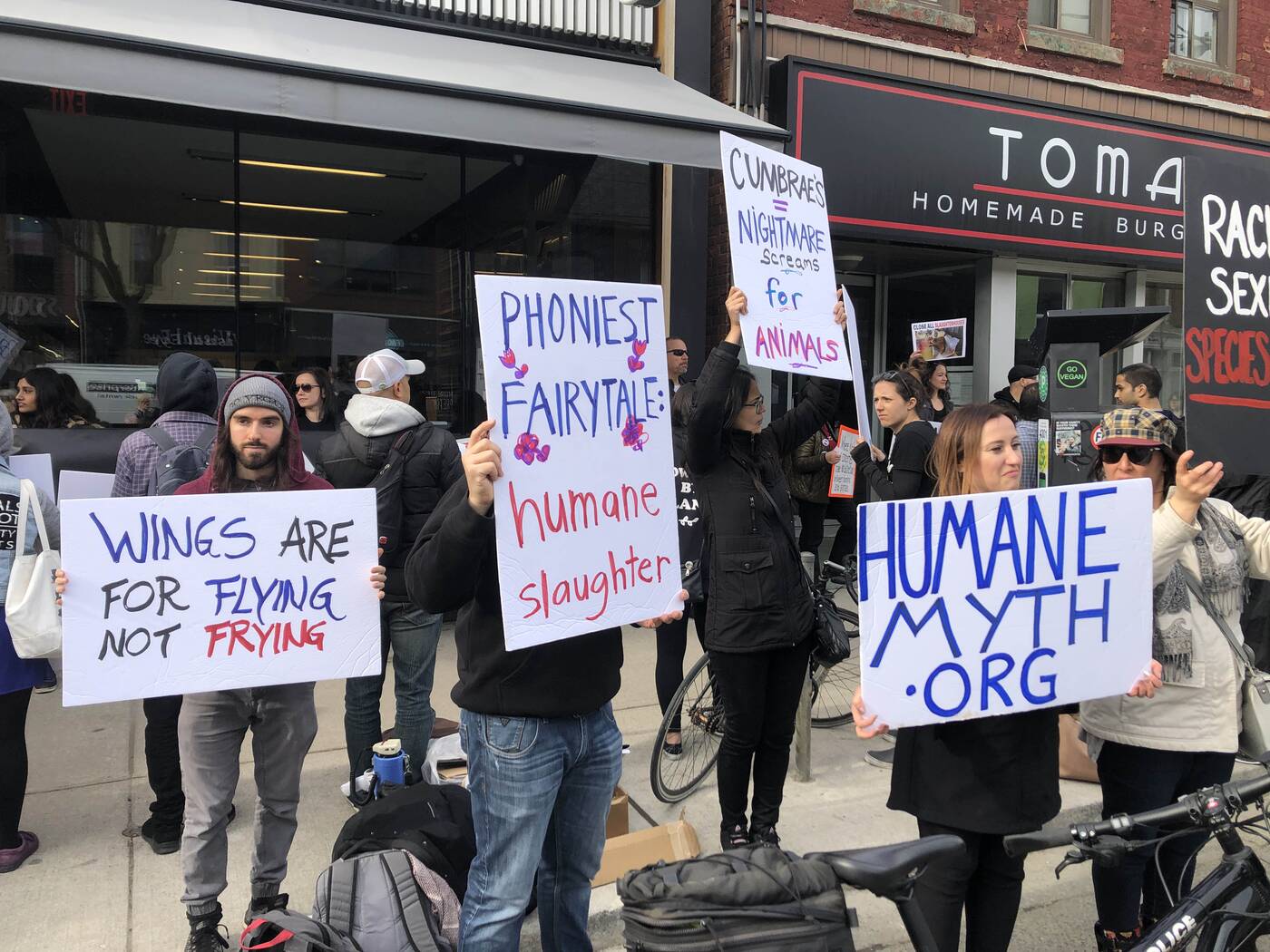 Protesters drew parallels between dogs and pigs to explain the concept of speciesism to bystanders. Photo by Lauren O'Neil.

The demonstrators were indeed quite calm and friendly, passing out Vegan Outreach pamphlets to passersby who expressed interest and explaining their motivations with creative protest signs. 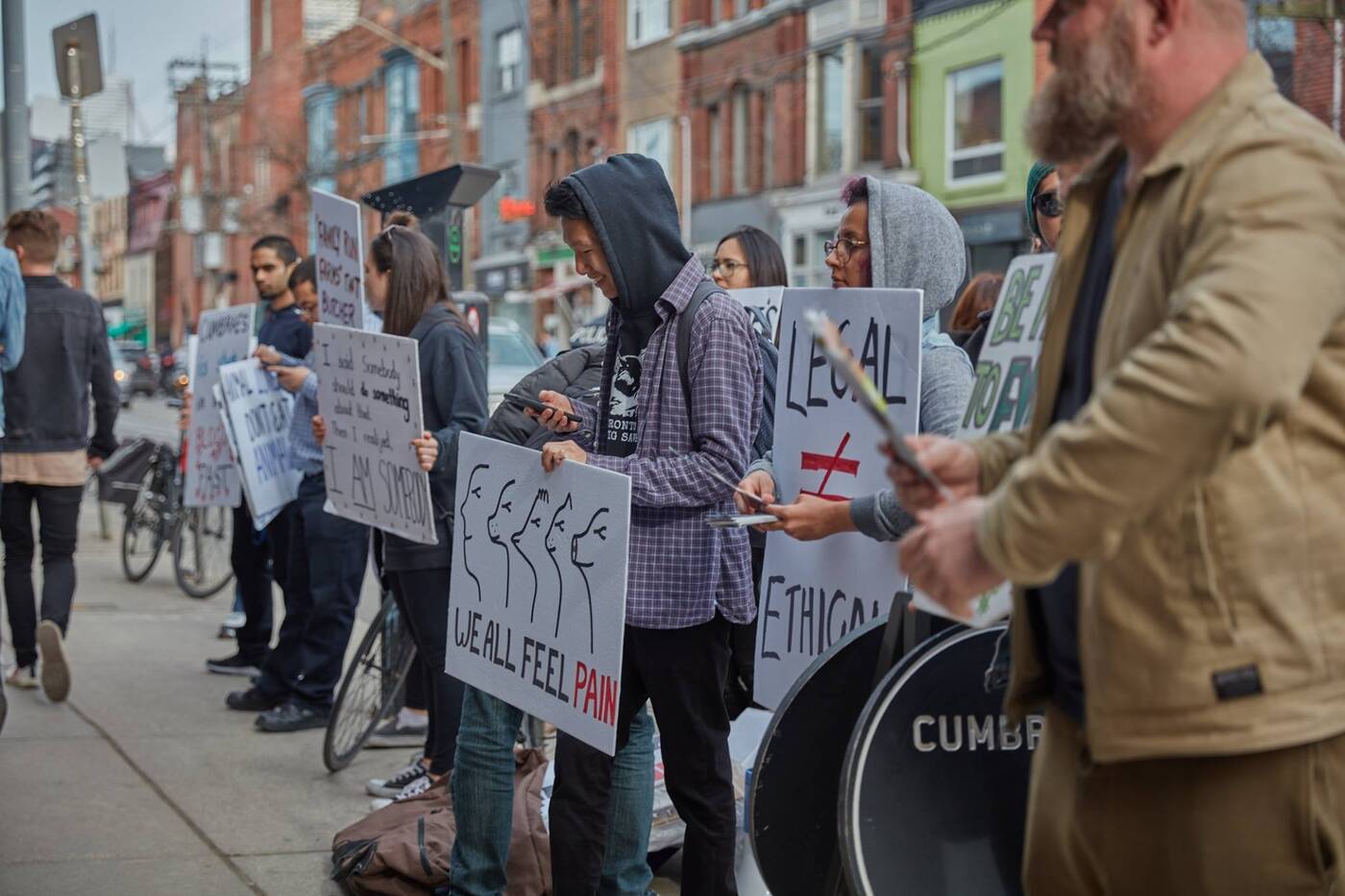 GRASS Toronto has been staging protests outside local businesses for the past year to raise awareness of meat industry marketing myths. Photo by Julius Sandor.

"Lucky for him that unlike those killed to be sold at Cumbrae's, he was born a dog. On farm sanctuaries dogs and cows play, but Cumbrae's customers discriminate, they tie up their dog to go buy a the body part of a cow, this is speciesism." 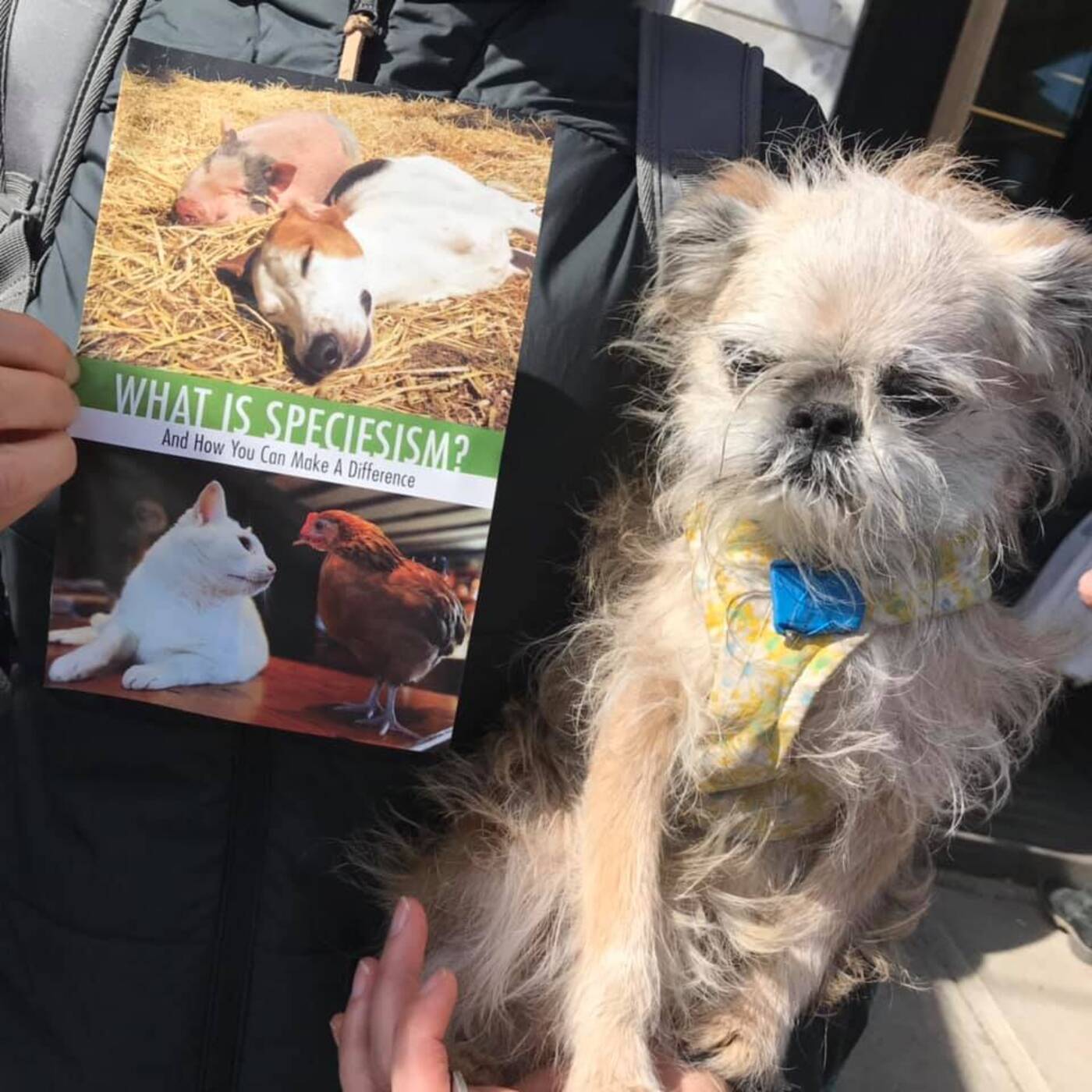 Dogs lent their paws in support of the cause on Saturday outside Cumbrae's. Photo via Jenny McQueen.

"Why do we protest small businesses? It’s the number one question that we get asked, the cause of anger, even from some vegans," wrote GRASS Toronto on Facebook ahead of Saturday's event.

"In addition to every single life mattering, in addition to all animals whether at a fast food place or an independent going to the same slaughterhouse, in addition to Toronto being made up of many small businesses, adding up to a lot of exploited animals," the post continues, listing off several stories of successful vegan conversions.

Dozens of protesters held up signs for pedestrians along Queen West. Those who stopped to talk were given pamphlets. Photo by Julius Sandor.

"As long as animals are treated as things, not beings, we're not going away."