The future of Toronto's public transit system is at risk

The next time you're stuck on a subway in Toronto going nowhere fast, you might want to give the TTC a break — it gets less of its money from the government than any other transit system in North America.

In fact, a new report from the non-partisan transit advocacy group CodeRedTO shows that nearly 70 per cent of the system's operating budget is paid for by fares.

With few other dedicated revenue sources, an overly simplistic rail network, and a politicized administrative structure unlike anything else seen in North America, that's a dangerous place to be.

Download our new report "Mixed Signals" here, complete with sources and data. Our goal is better information for everyone so you can make your own decisions about the #transit system you want to see. #TOpoli #ONpoli #TTC https://t.co/cKCCpeVKOx pic.twitter.com/dtJ5Gu1TpB

"Tangible increases to service levels, improvements to passes and fares, and funding to build a more complete network all demand our immediate attention."

Anyone who follows local transit news can agree with that, but CodeRedTO's reasons for the urgent call to action are particularly striking when laid out in the new report, which is aptly titled Mixed Signals: Toronto Transit in a North American Context. 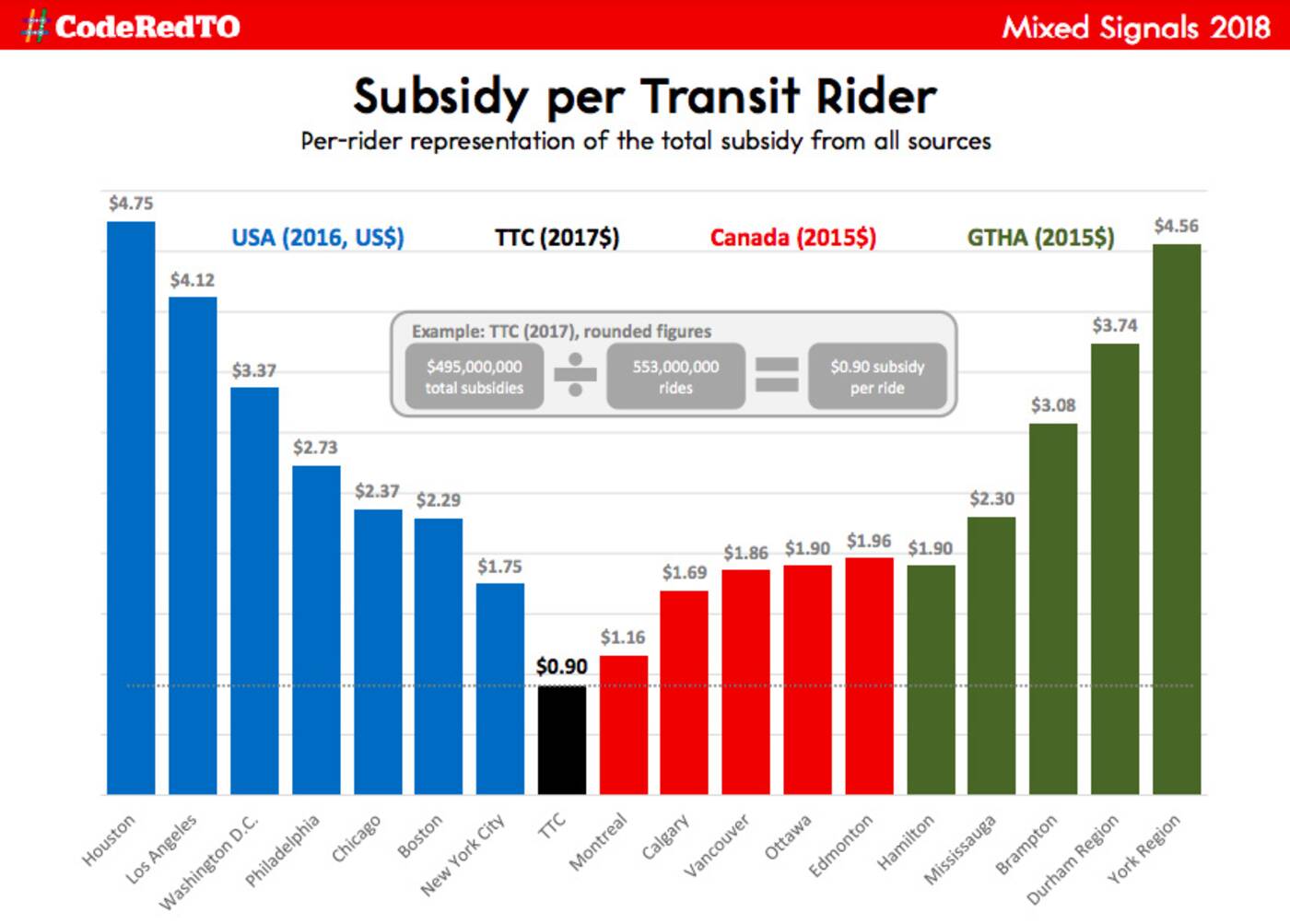 Toronto, specifically, has the lowest amount of subsidy funds per rider out of all cities and regions surveyed for the report. Image via CodeRedTO.

The 60-page-long document was released today at City Hall after 18 months of research and work. In it, CodeRedTO contrasts Toronto against other cities in Canada and the U.S. with "similar local and commuter rail transit systems."

The cities surveyed include Montreal, Vancouver, Boston, Los Angeles, Chicago, Houston, and Washington. New York does appear in some sections of the report, but was intentionally left off the main list of comparison cities based on its size (and the fact that its subway system was basically finished before Toronto even started building one.)

"The goal of the comparisons is to see what Toronto is doing well and how it could do better," reads the report's executive summary. And that it does. 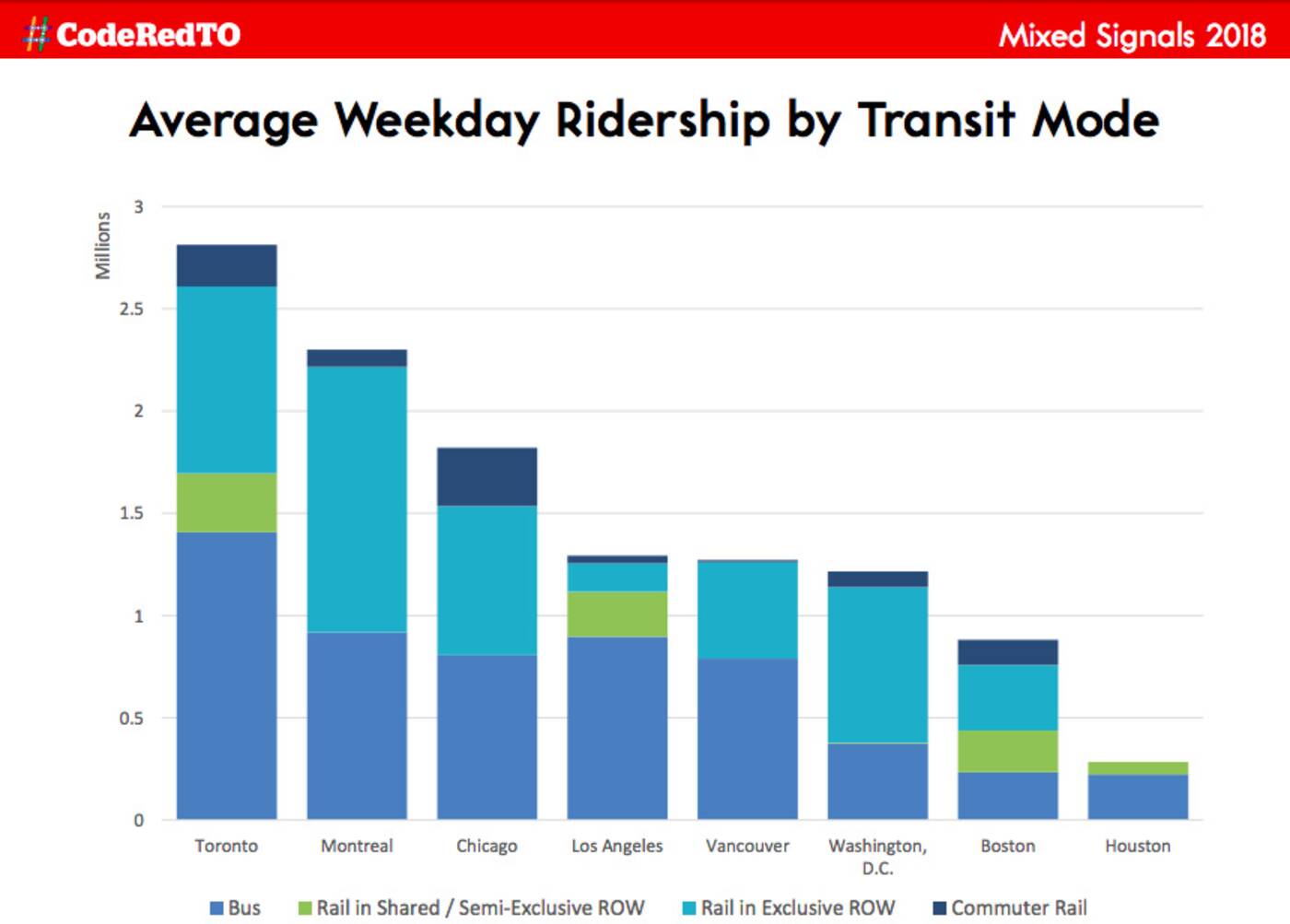 Bus rides account for the the largest proportion of transit use in Toronto. Image via CodeRedTO.

Among the key points made by CodeRedTO: 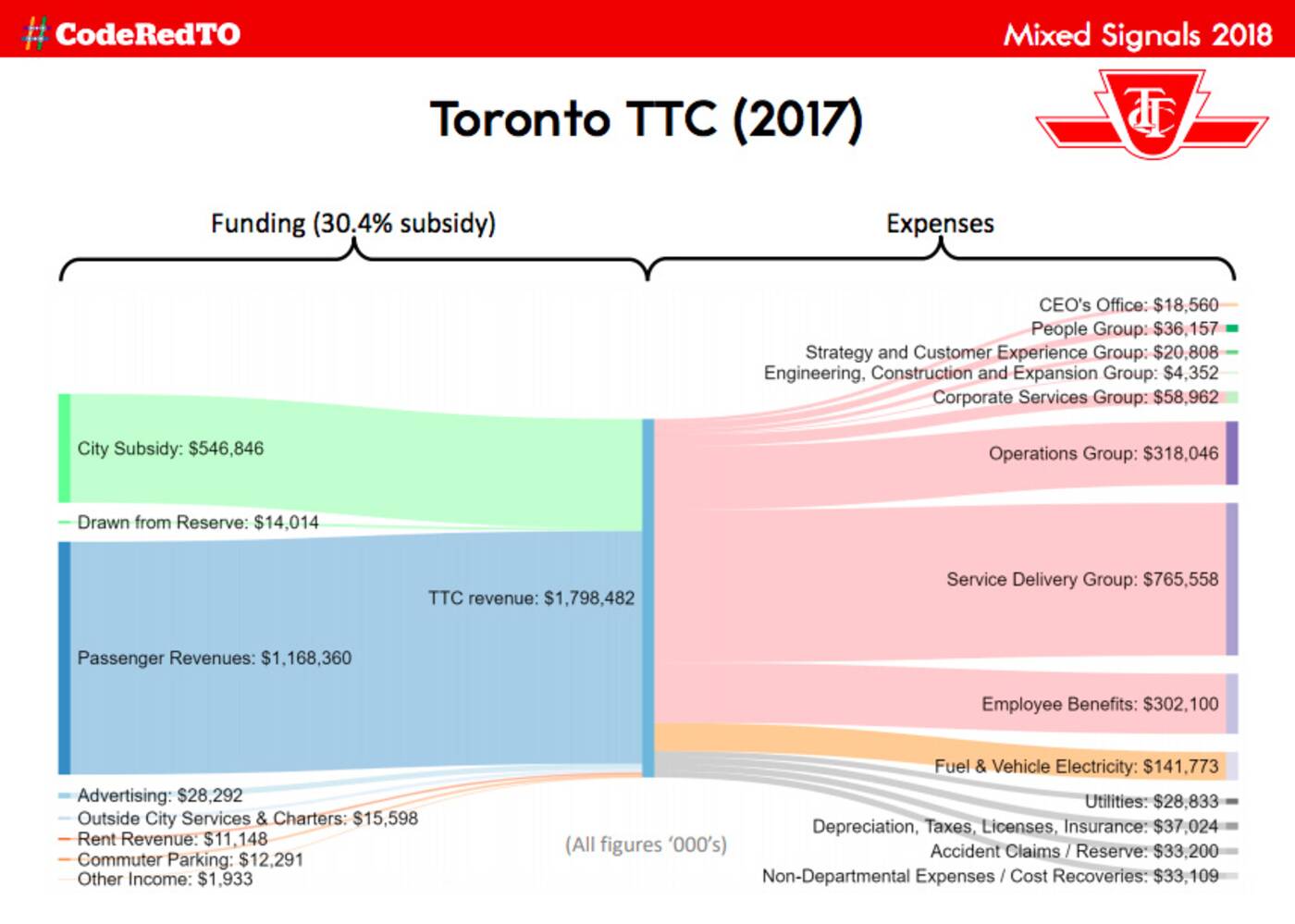 Only 30.4 per cent of the TTC's operating budget came from subsidies, as of 2017 — less than any other city in North America. Image via CodeRedTO.

So what's the solution?

Different investment strategy reports from policy centres and levels of government over the past 5 years have suggested using everything from road tolls to corporate income taxes to help fund the TTC.

CodeRedTO points out that Montreal and Washington DC both contribute a subsidy calculated in relation to their population. In Houston, sales tax contributes over 65% of the Metro system's revenue. But tax talk is really only scratching the surface.

The non-partisan, volunteer-run transit advocate is encouraging everyone in Toronto to look at the report and decide for themselves which kinds of changes should be made in terms of governance.

So go read it and let them know what you think.