The Kingsway in Toronto is more than just an old theatre

Just a short walk from the Royal York subway station, the historic Kingsway Theatre still shines in all its old-timey glory.

From the classic street-facing box office beneath the marquee to the lounge filled with Golden Age Hollywood paraphernalia, the theatre combines nostalgia with 21st century pricing, where weekend movie tickets will set you back $16 (it used to be 20 cents a pop in its heyday). 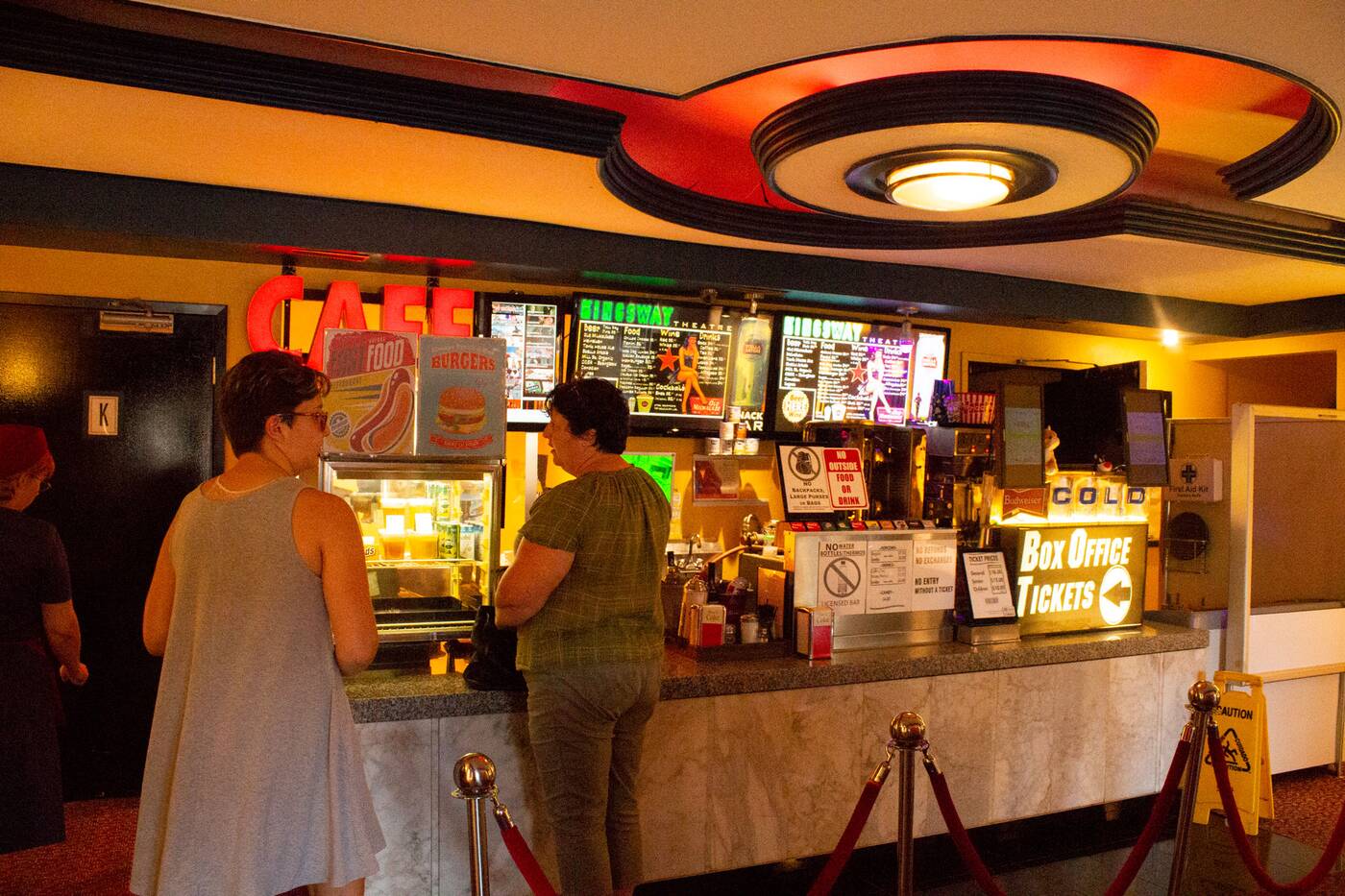 The Kingsway Theatre was re-opened and renovated in 2009 after closing in 2006.

For over 70 years, this 700-seater art deco theatre has served as one of the main attractions of The Kingsway area, which, despite having gained several more attractions over the decades, is perhaps best still embodied by the theatre's air of nostalgia. 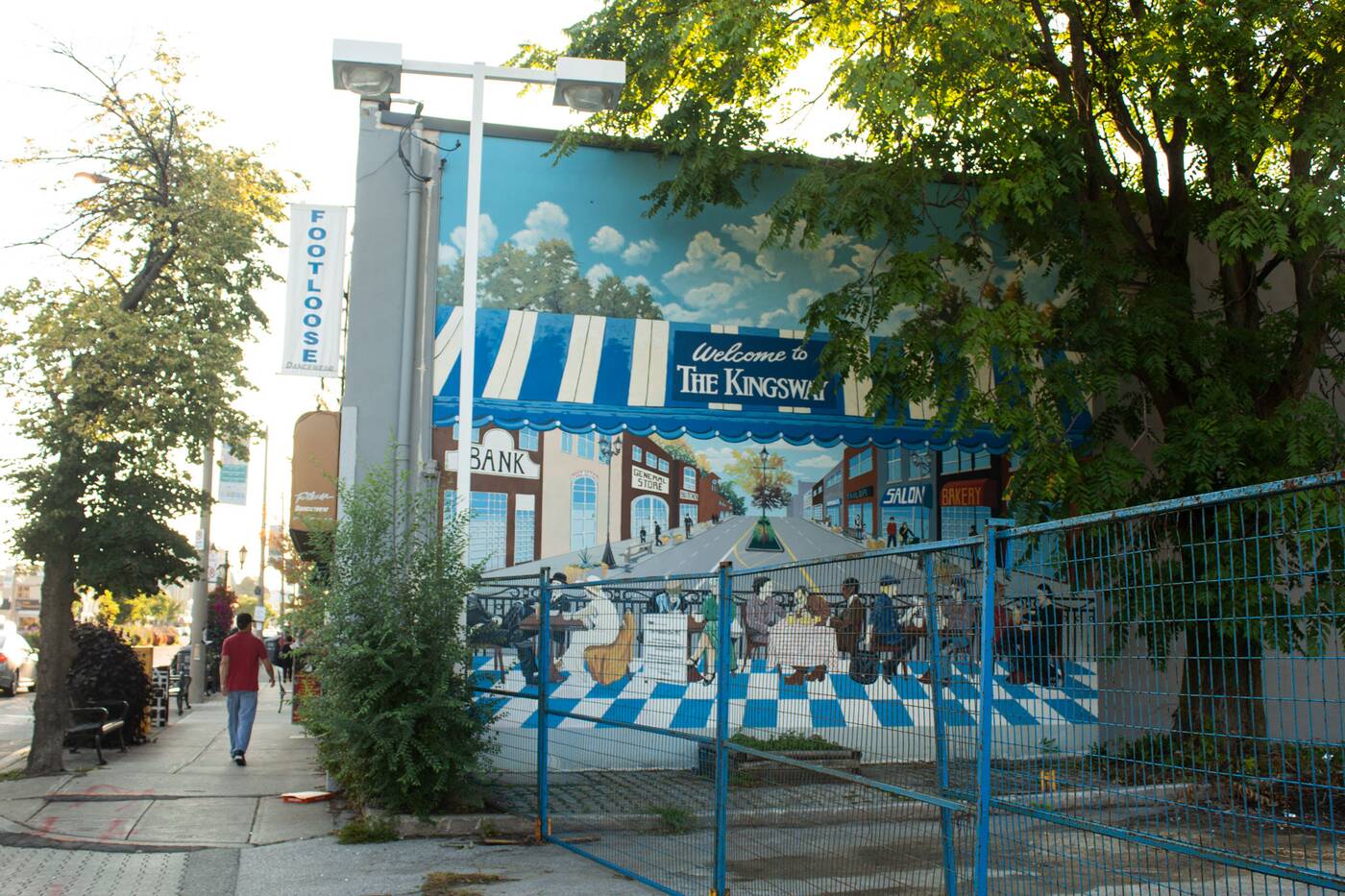 The Kingsway is bordered by the Humber River to the east and Mimico Creek to the west.

The Kingsway neighbourhood has, like its theatre, managed to maintain identity as an affluent destination: a reputation its held since the neighbourhood was first developed by the lawyer Robert Home Smith in the mid 1910s. 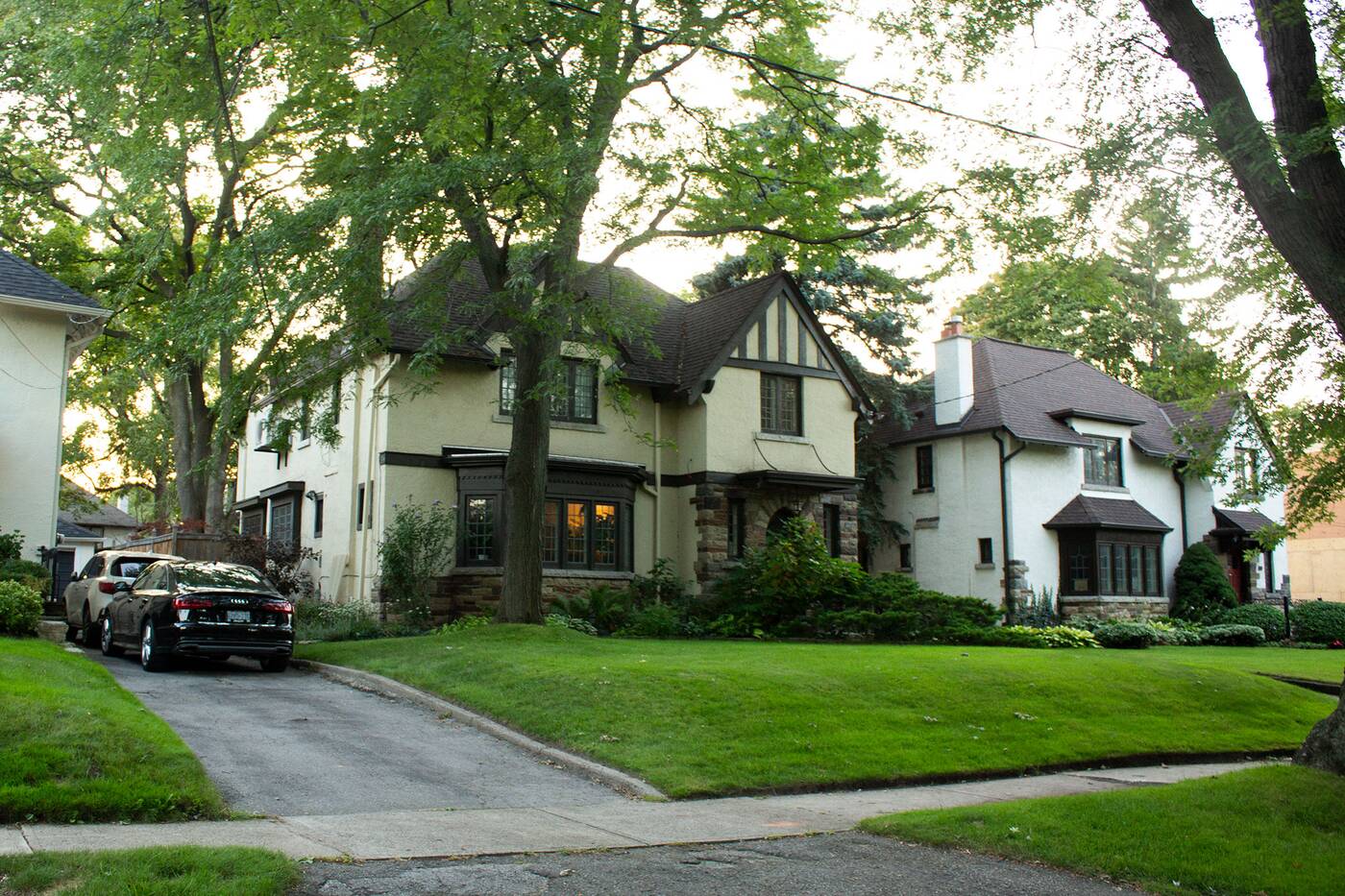 The neighbourhood has historically always been an area for the wealthy.

Always intended to be an area for the rich, this highly curated pocket of Etobicoke is home to some of the most beautiful houses in the city. 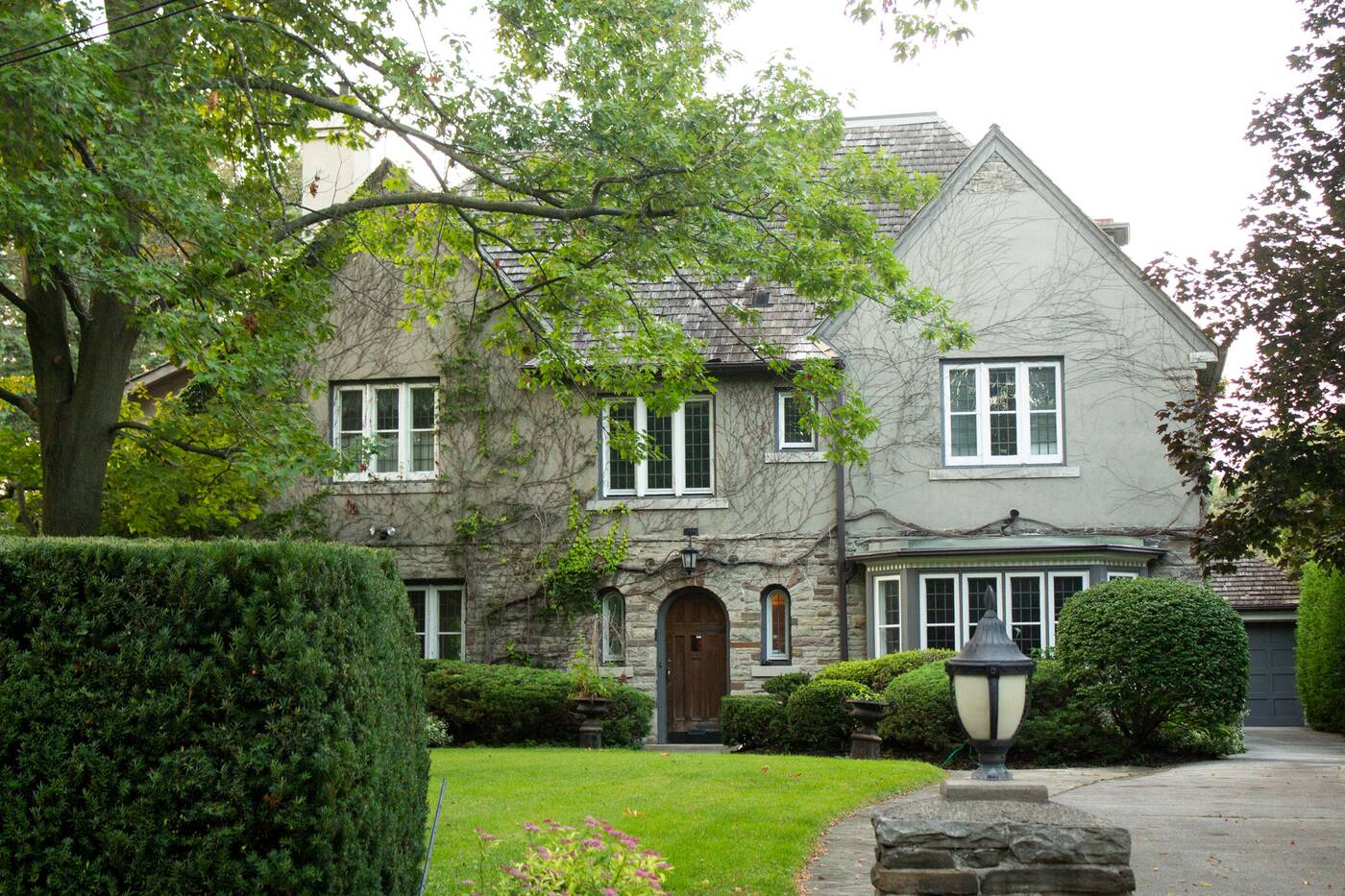 Average home prices in the neighbourhood averaged at $1.9 million.

Today, average house prices of the Kingsway South (its technical name) are a whopping $1.9 million. 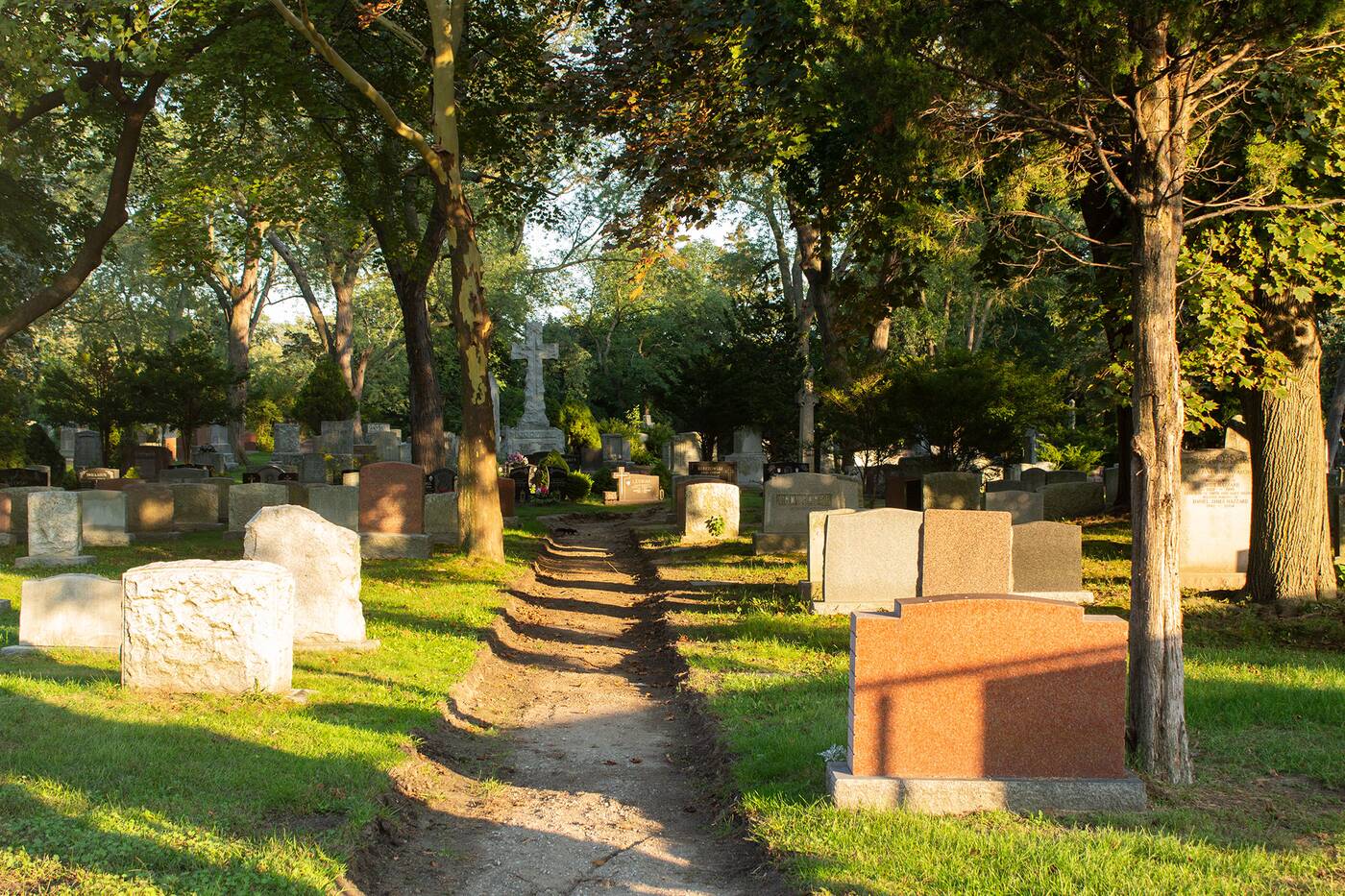 The Park Lawn Cemetery and Mausoleum opened in 1892.

Stationed between Dundas and Bloor—in the part of the city where the former runs north of the latter—the Kingsway is bound by the Humber River to the east and Mimico Creek to the west. Its name derives from its main artery, Kingsway Crescent, which snakes alongside Humber River. 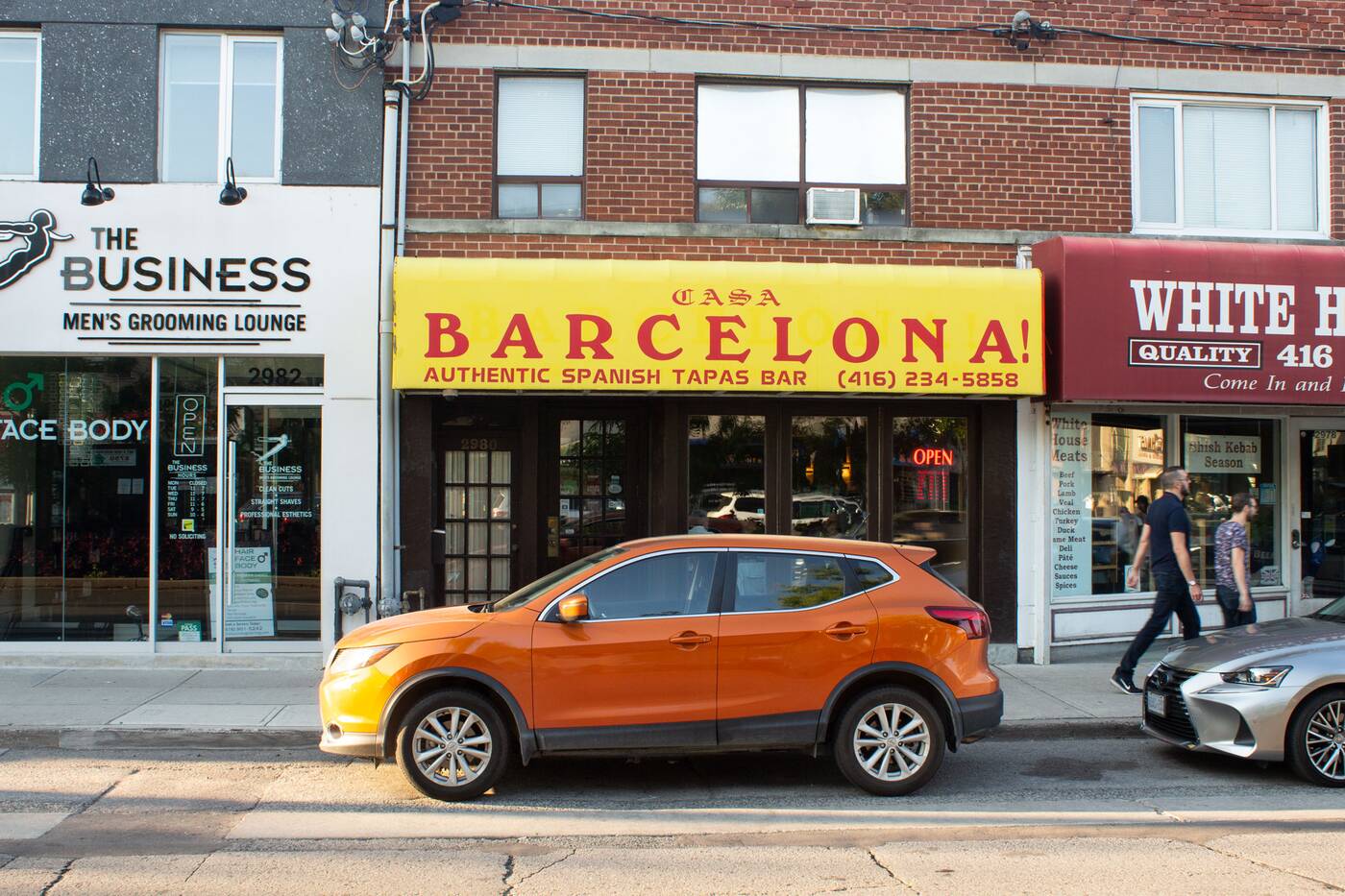 There are a handful of reliable restaurants in the area that cover all types of cuisines.

Those looking to do something other than catch a flick and ogle at beautiful homes, however, will find a limited but dependable handful of neighbourhood haunts to frequent on the strip of Bloor just past Park Lawn Cemetery and ending around Brentwood Road. 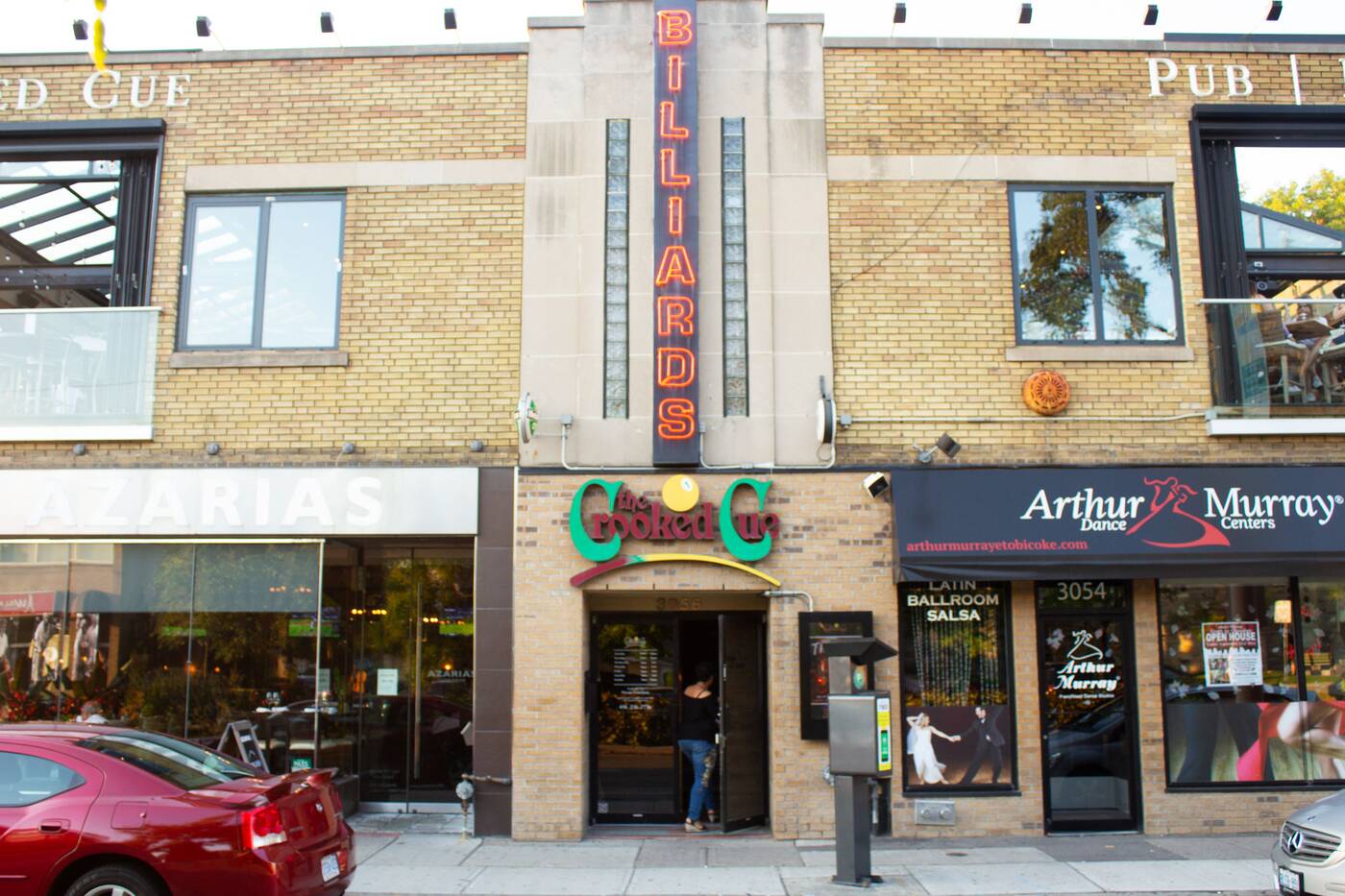 The Crooked Cue is one of the most popular hangouts in the area.

There's a solid selection of food options ranging from neighbourhood staple Kingsway Fish and Chips to Italian joints like Vibo, Romis, and Sempre. There's also French by way of Merlot, tapas via Casa Barcelona (with live flamenco) and sushi courtesy of Momiji. 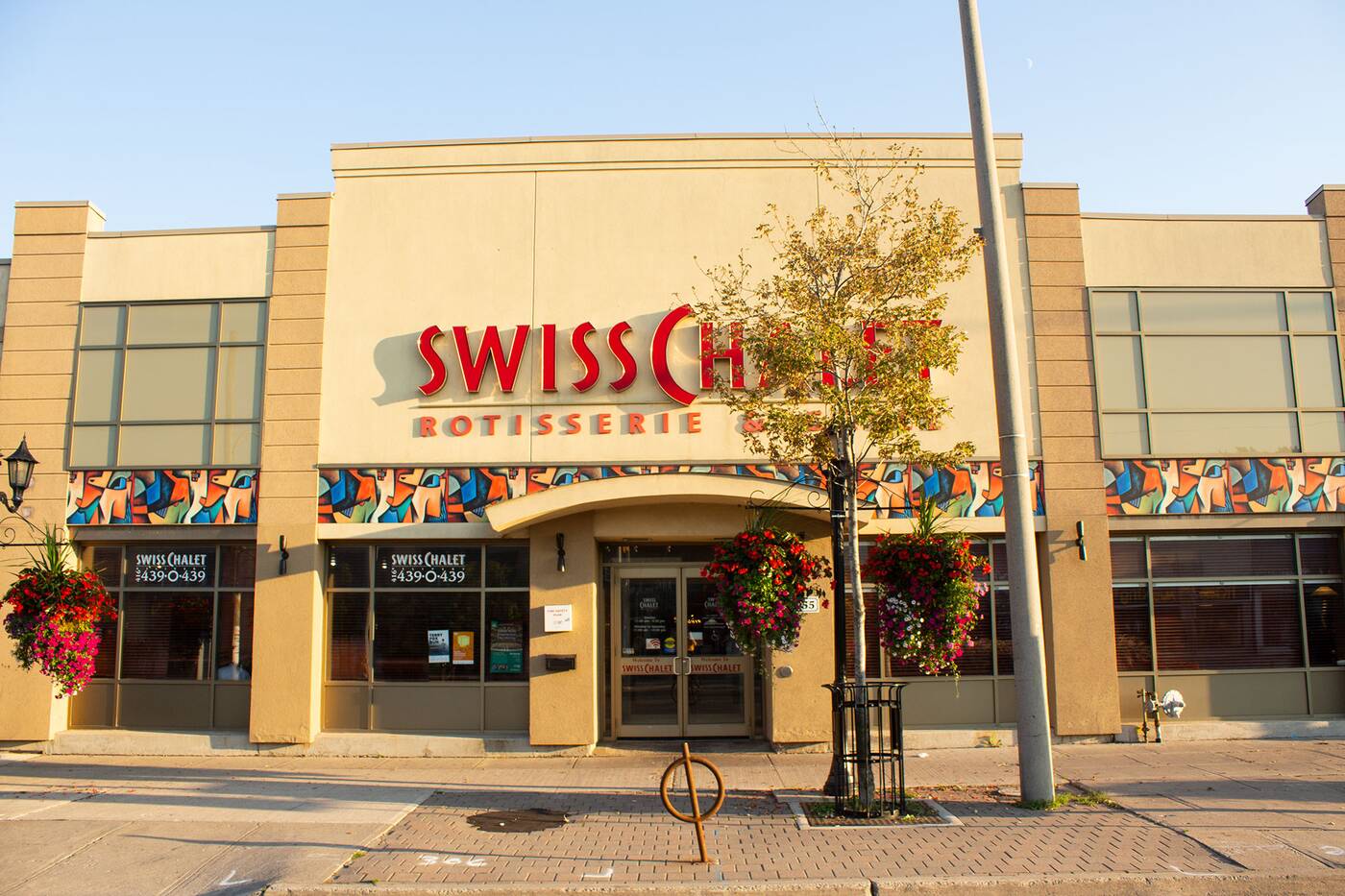 The main strip of Kingsway is home to one of the larger Swiss Chalets in the city.

The vibe on this strip is less elitist than expected, given the neighbouring value of real estate, and more geared toward family-friendly institutions that trend toward a play-it-safe atmosphere and sleepy Sunday go-tos. 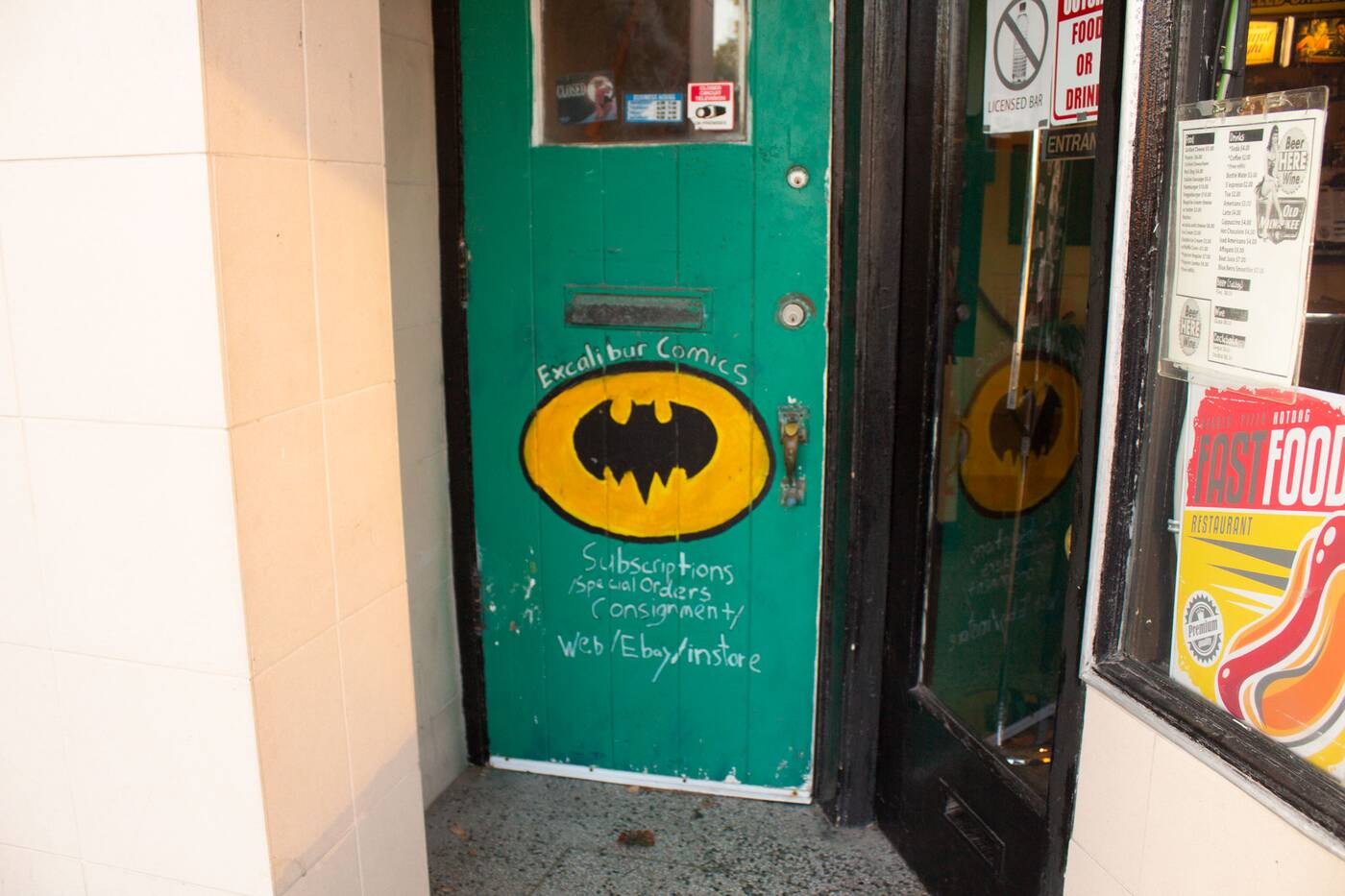 Excalibur Comics has been operating since 1987.

Directly next to the theatre is Excalibur Comics, a tiny but beloved comic shop that's been operating since 1987. 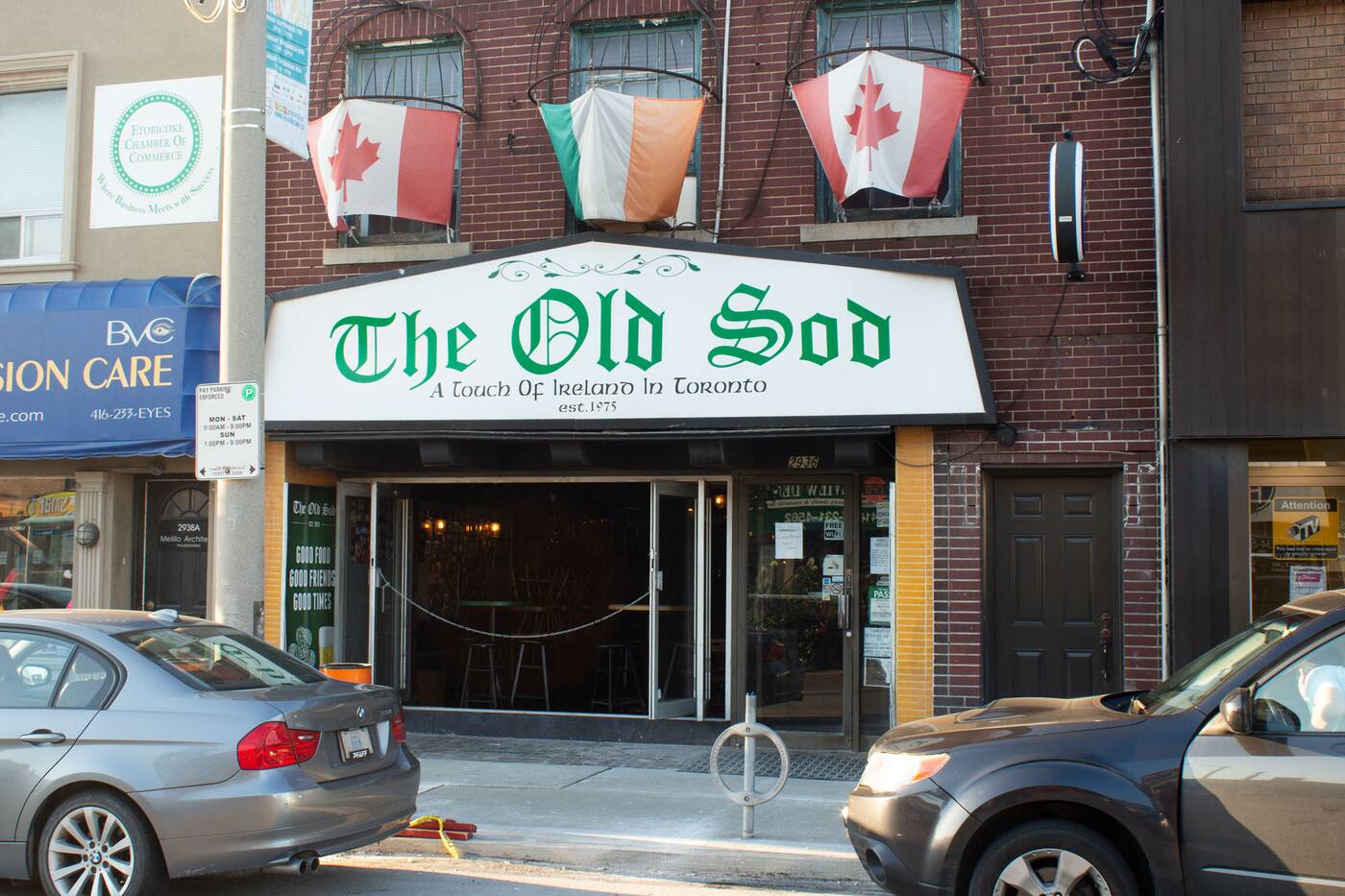 The Old Sod has a dive-like atmosphere but is one of the more frequented pubs in the Kingsway.

In terms of watering holes, pubs like the Old Sod (which claims itself as Etobicoke's oldest pub) and the Monk's Kettle (a much newer addition) are a couple of casual spots for some brew on tap. 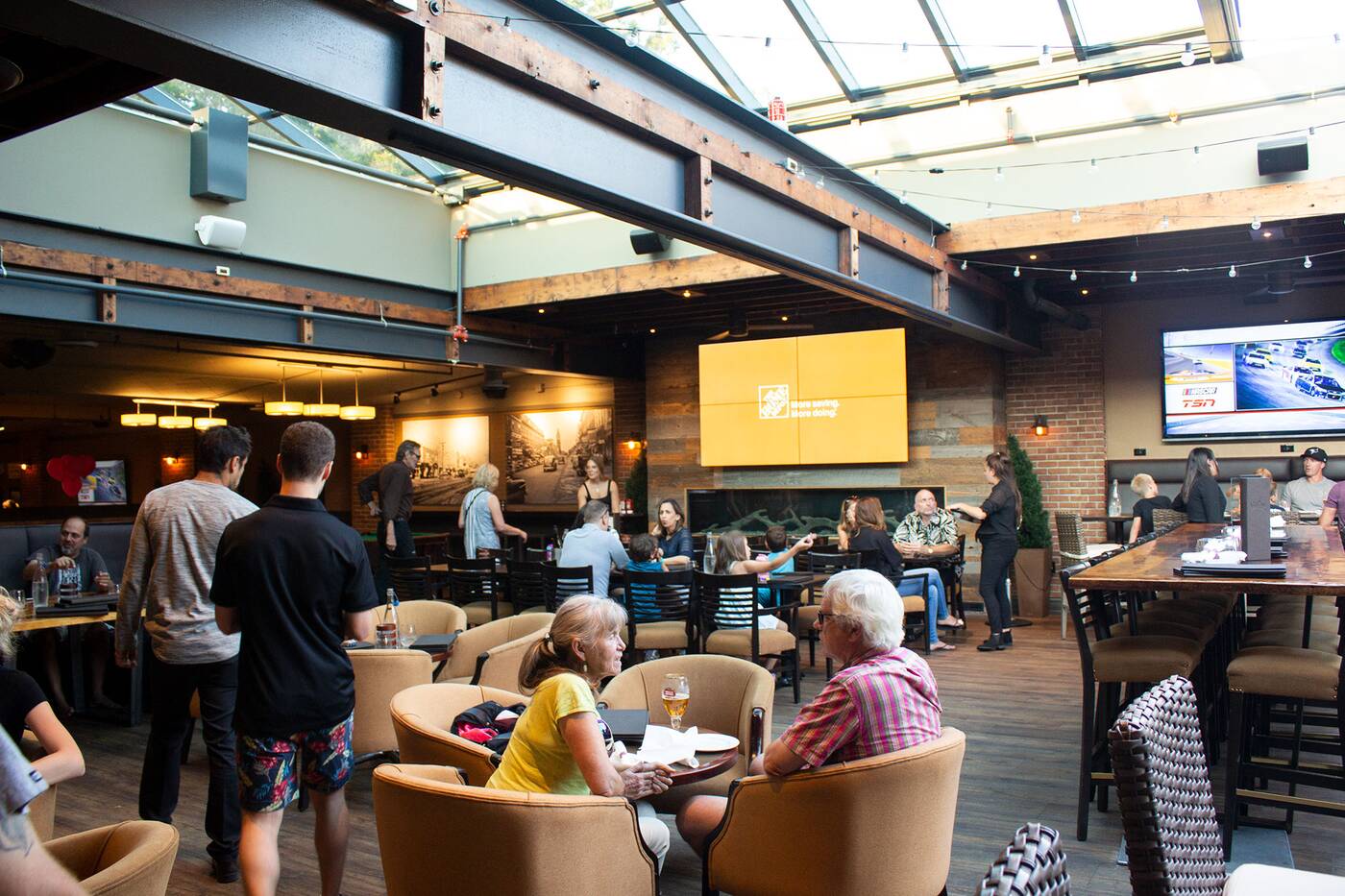 The Crooked Cue has a large and spacious interior.

But it's the pool hall and restaurant, The Crooked Cue, that undoubtedly takes the lion's share of business in the area, being the closest thing to a sprawling modern casual dining experience in the Kingsway. 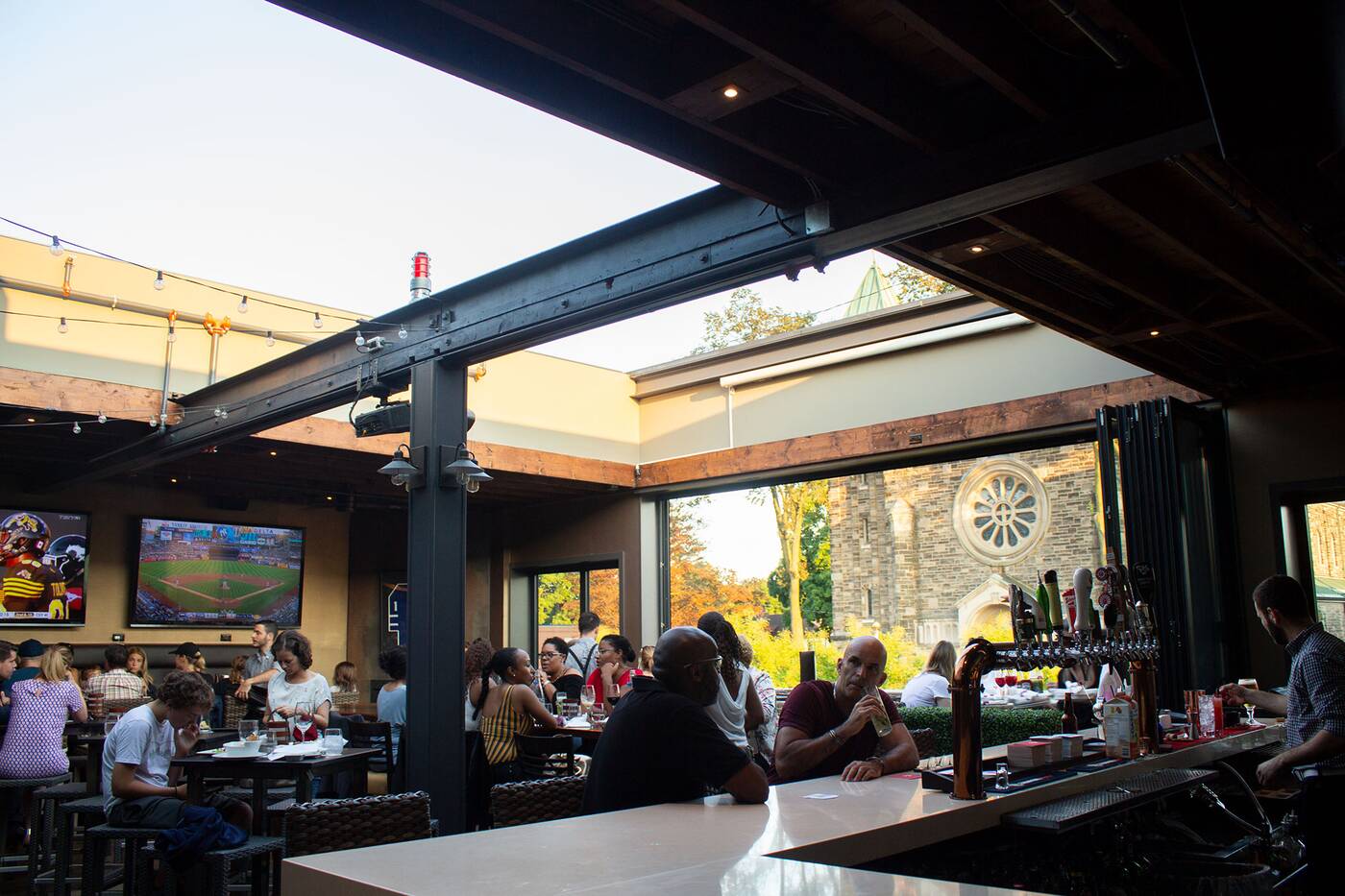 The open patio concept is a big draw at the Crooked Cue.

With two floors, two lounges, and ceilings that open up toward Our Lady of Sorrows Church, the spacious design draws a mixed crowd on evenings and weekends. 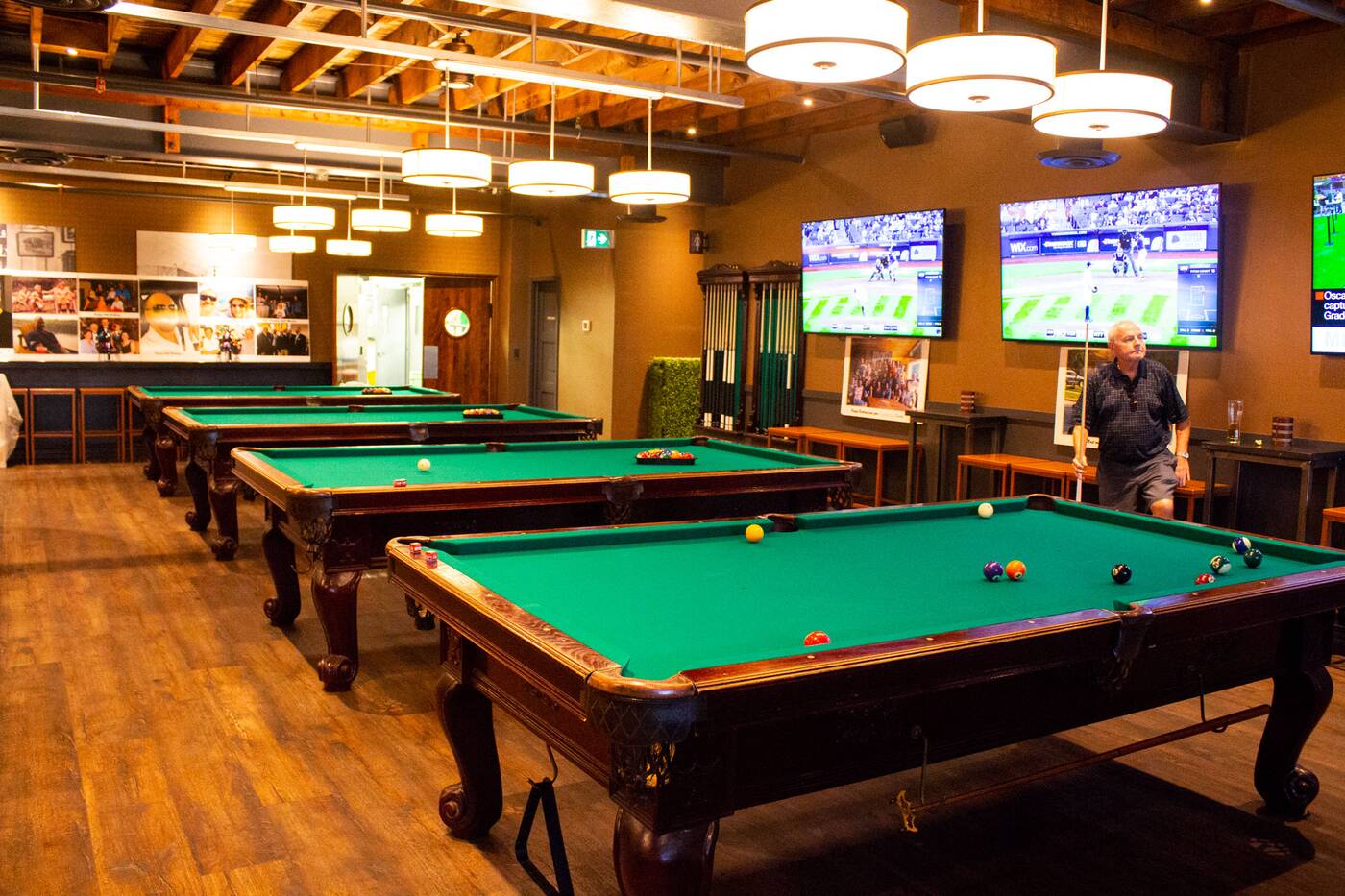 There are 14 pool tables and 4 ping pong tables at the Crooked Cue.

Rounds of pool at one of the the restaurant's 14 tables are $20 an hour, while grabbing one of four ping pong tables goes for $25 an hour. Large and airy, it's a prime destination for large bookings like birthdays and retirements. 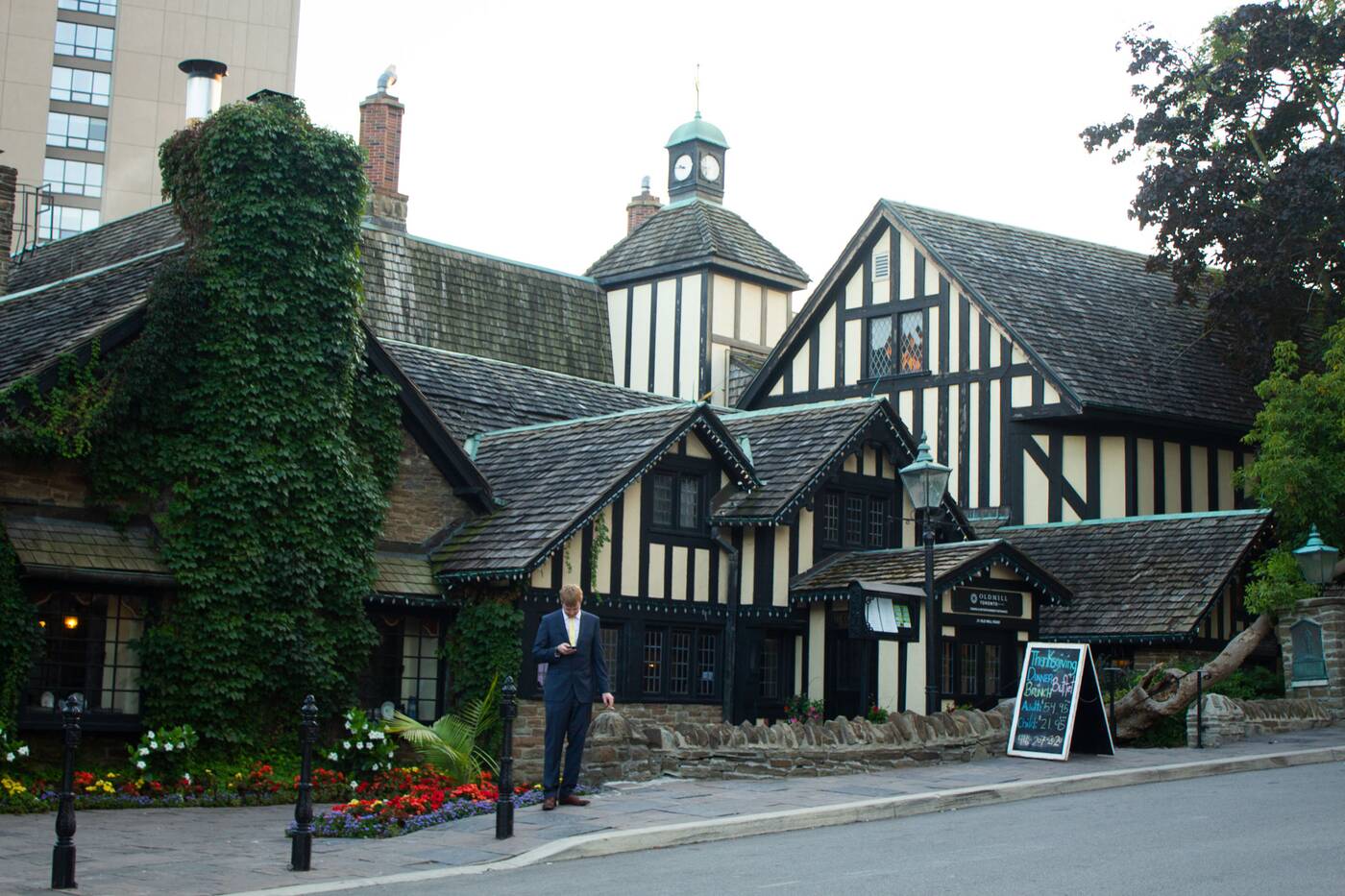 The Old Mill was opened by R. Home Smith, the main architect of the Kingsway neighbourhood.

About a five-minute drive from the main action is the Old Mill, a historic hotel and tea garden restaurant that has served afternoon tea since 1914.

Far more traditional affairs like Sunday family brunches and dinnertime buffets have been a staple ritual for many inhabitants of the houses and apartments lining Old Mill Road. 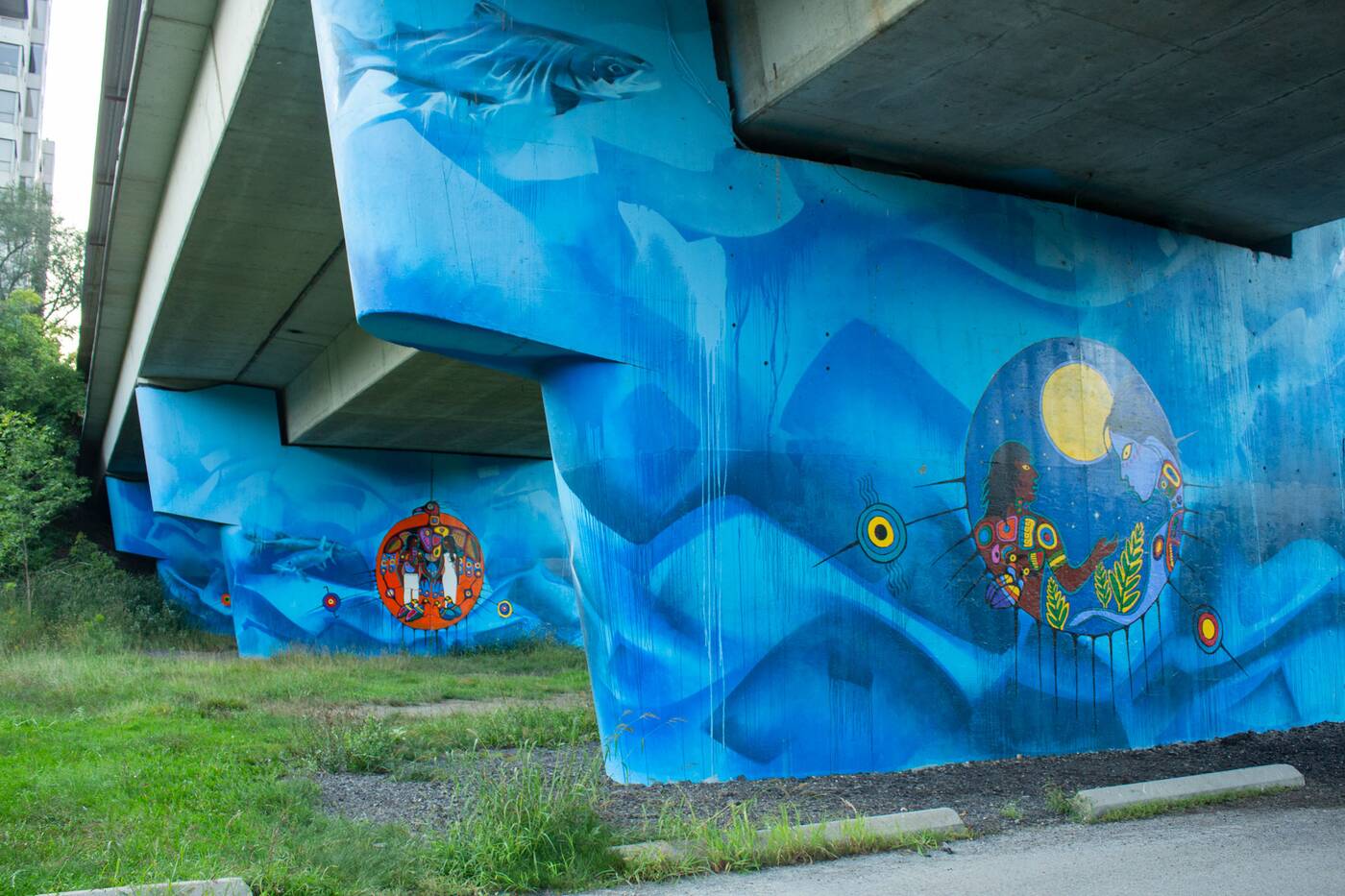 A trail next to the Old Mill leads to the Humber River Recreational trail.

If you're looking for more of a nature reprieve, you're in luck! The Kingsway is bounded by the natural topography that accompanies its bordering rivers, just a quick walk down a tree-lined path from the Old Mill toward the Humber River Recreational Path. 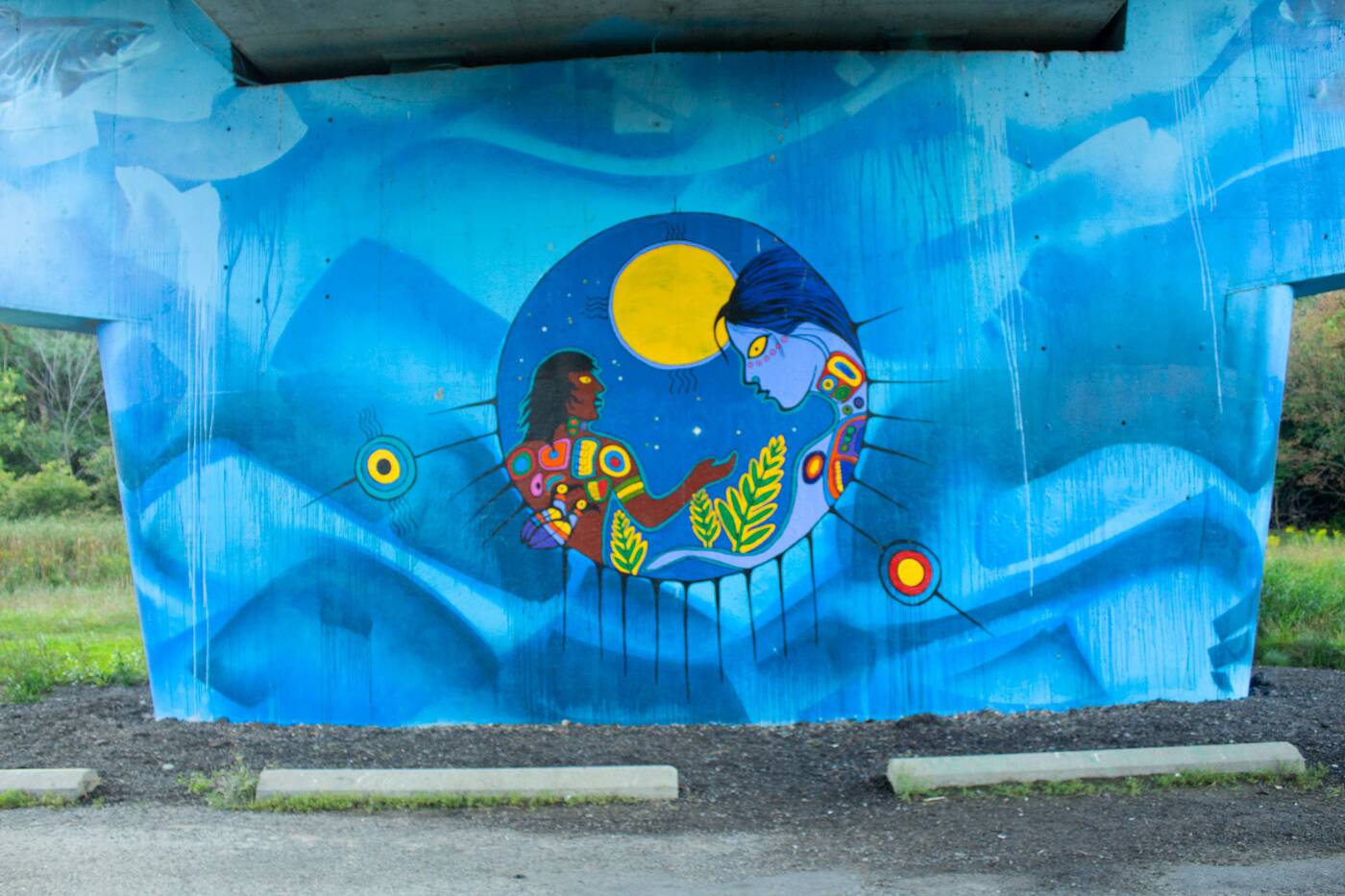 The walls beneath the bridge have murals painted by Phil Cote in the style of Norval Morrisseau.

Heading under the bridge of the TTC's Line 2, the small clearing also contains the plaque of the Hurricane Hazel Memorial. Explore underneath the bridges to find a beautiful trail lining the Humber River. 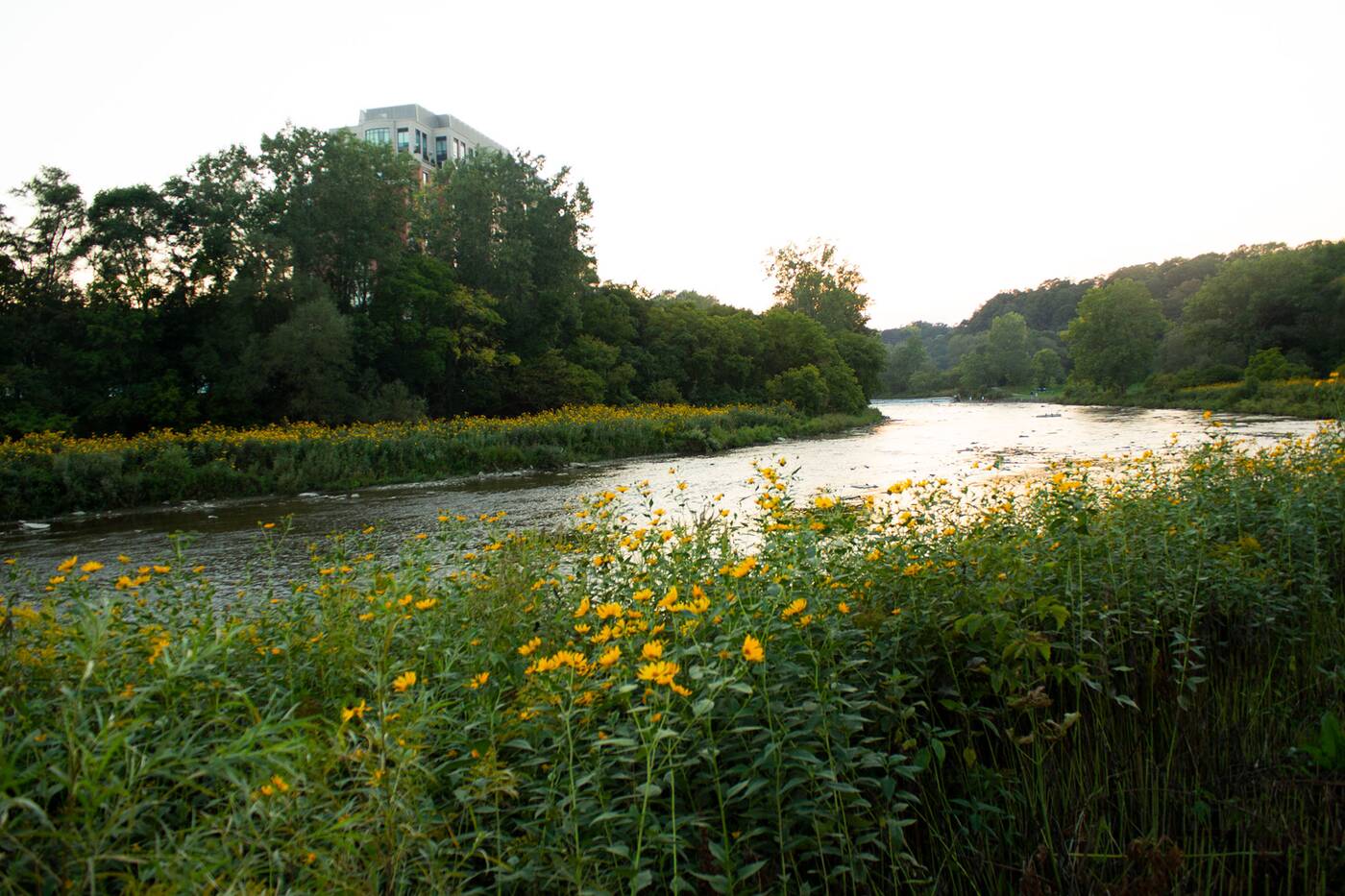 Etienne Brulé Park gives an incredible view of the Humber River and is a popular spot for families.

Just north, on the other side of the river sits Etienne Brulé Park, which, while not located on the right side of of the river to be considered Kingsway proper, is a natural wonder frequented by the many lucky inhabitants of this forested neighbourhood. 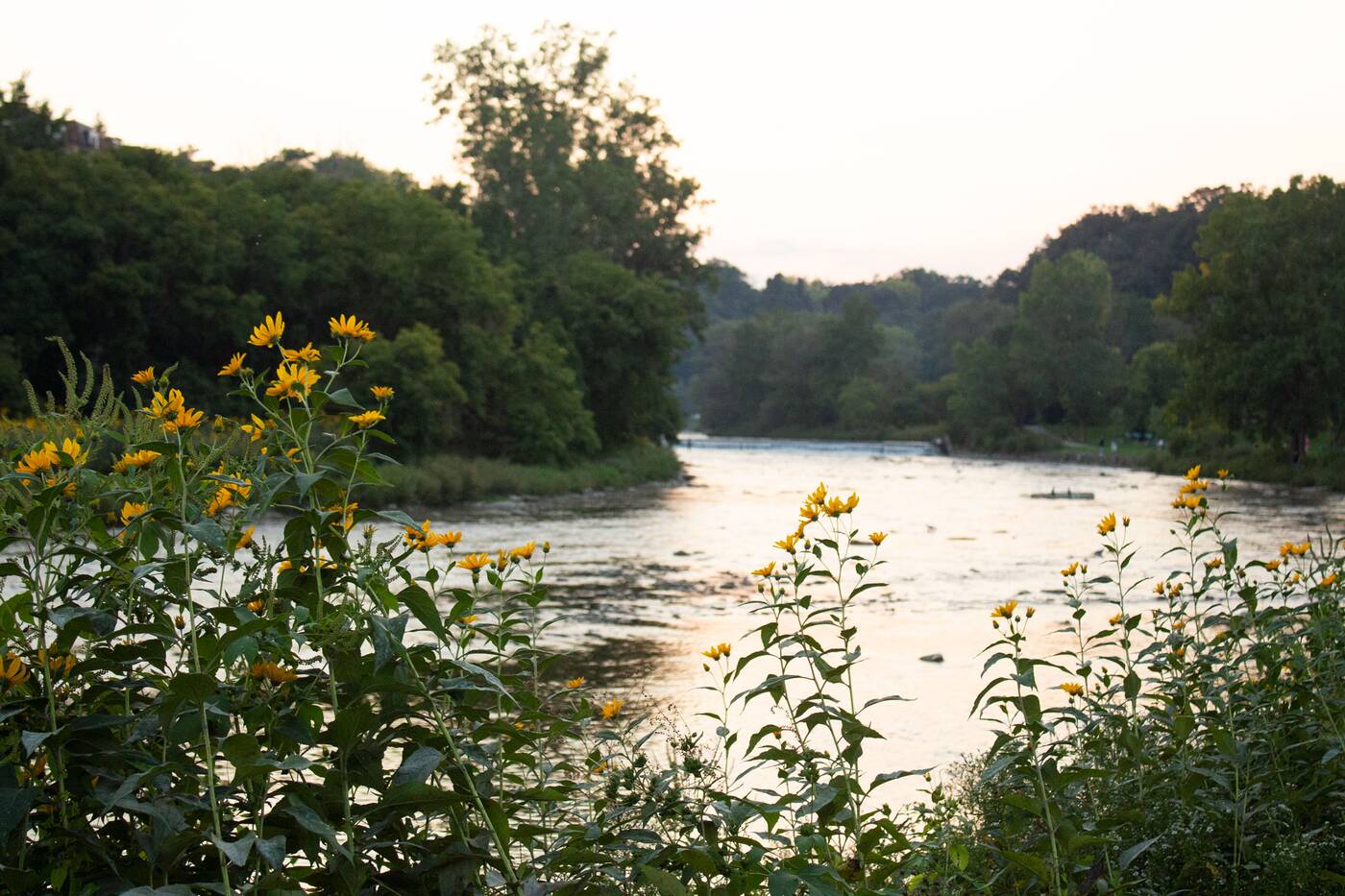