Heaven. Hell. The great grass beach. A free petting zoo. A toilet for dogs. The most magical place on Earth. The crucible of annoying millennial trends.

Trinity Bellwoods Park is a lot different things to a lot of different people, but whether you day drink there every weekend with your crew or curse the existence of slackliners while riding your bike through, we can all agree that it's a unique place.

Toronto simply wouldn't be Toronto without Bellwoods — or, as it's referred to in Facebook's official mapping system, "Neoliberal, hipster mecca." 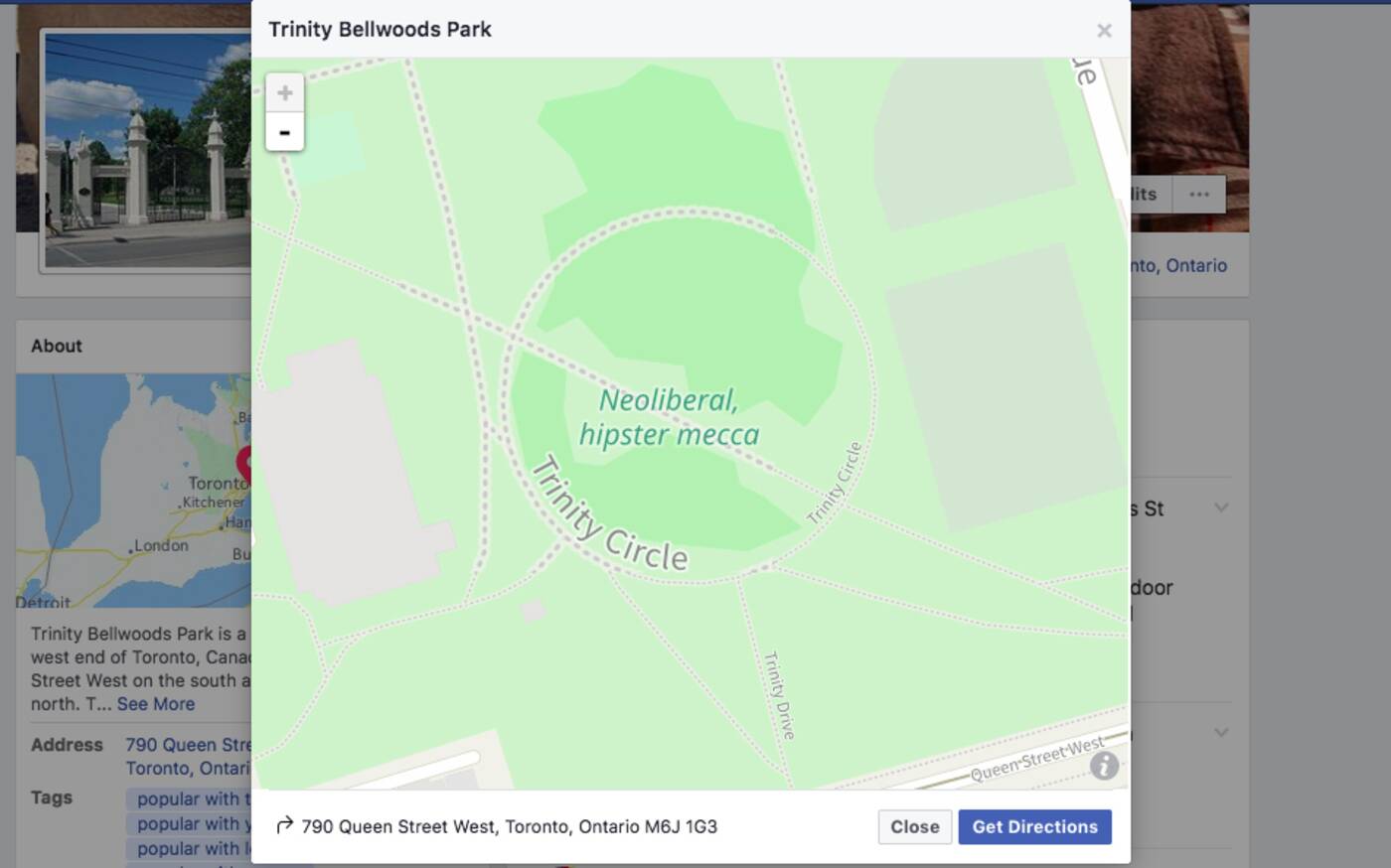 The grassy lower middle part of Trinity Bellwoods Park, popular among drum circle participants and slackliners, has its own unofficial name on Facebook. Screenshot by Lauren O'Neil.

This fun little Easter Egg was discovered by Mickael Julliard, a Toronto-based bike courier who frequents the park with his friends.

He says that he noticed it while using Facebook Messenger's live location feature, which allows you to share your exact location with friends in real time.

Being that the situation is hilarious, he took a screenshot of the map to post in a private Toronto Facebook group with the caption "Trinity has a funny nickname on Facebook's map."

And this was no fluke. Go to any Facebook event being hosted in Trinity Bellwoods right now (or the park's location page, for that matter) and click on the "show map" feature.

From far away, everything looks normal. The green patch between Dundas and Queen Streets is labelled "Trinity Bellwoods Park." 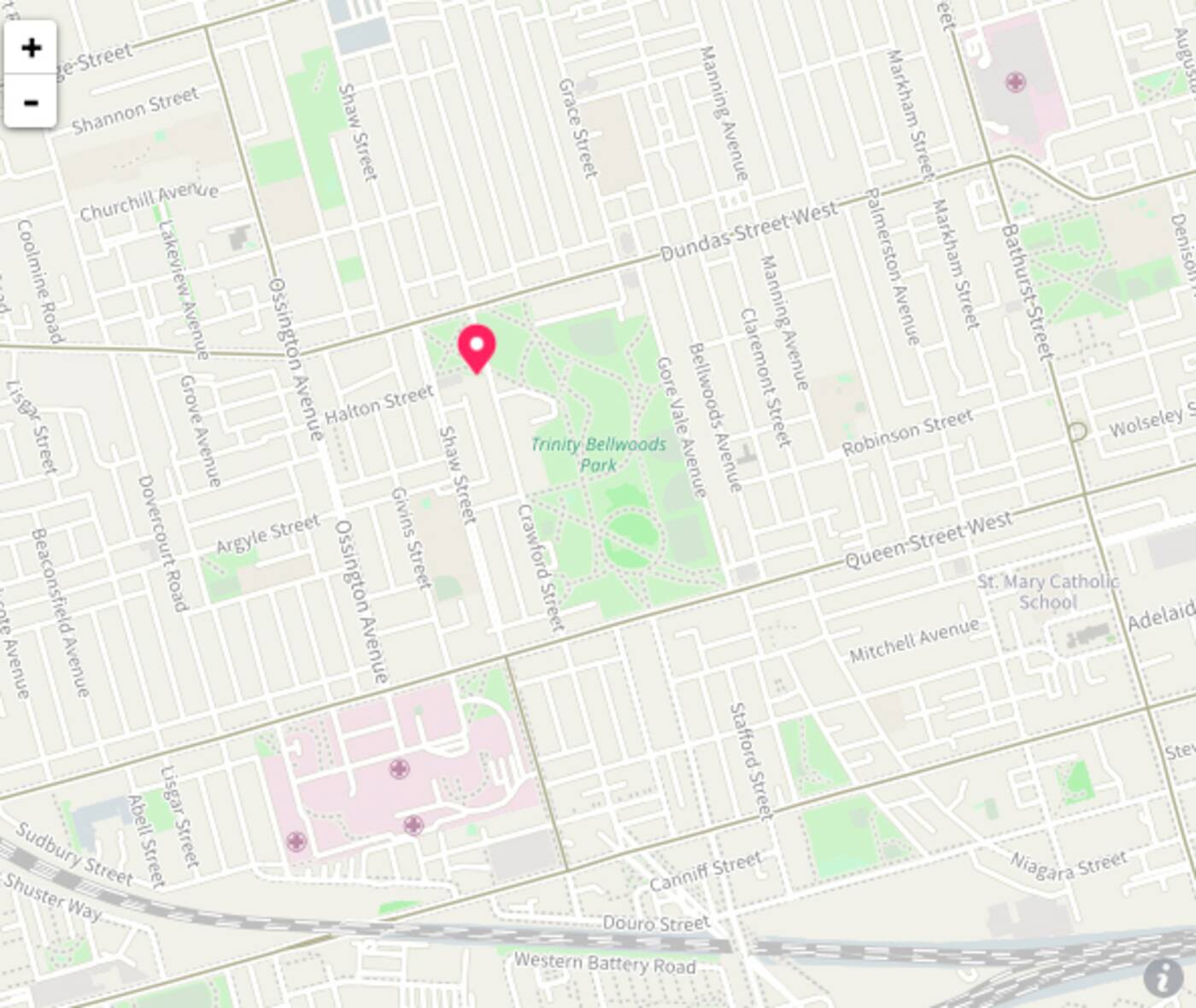 Zoom in to the lower half of the massive park, however, and that name disappears.

In its place is Neoliberal, hipster mecca, which is actually pretty bang on, for better or for worse, minus the neoliberal part. 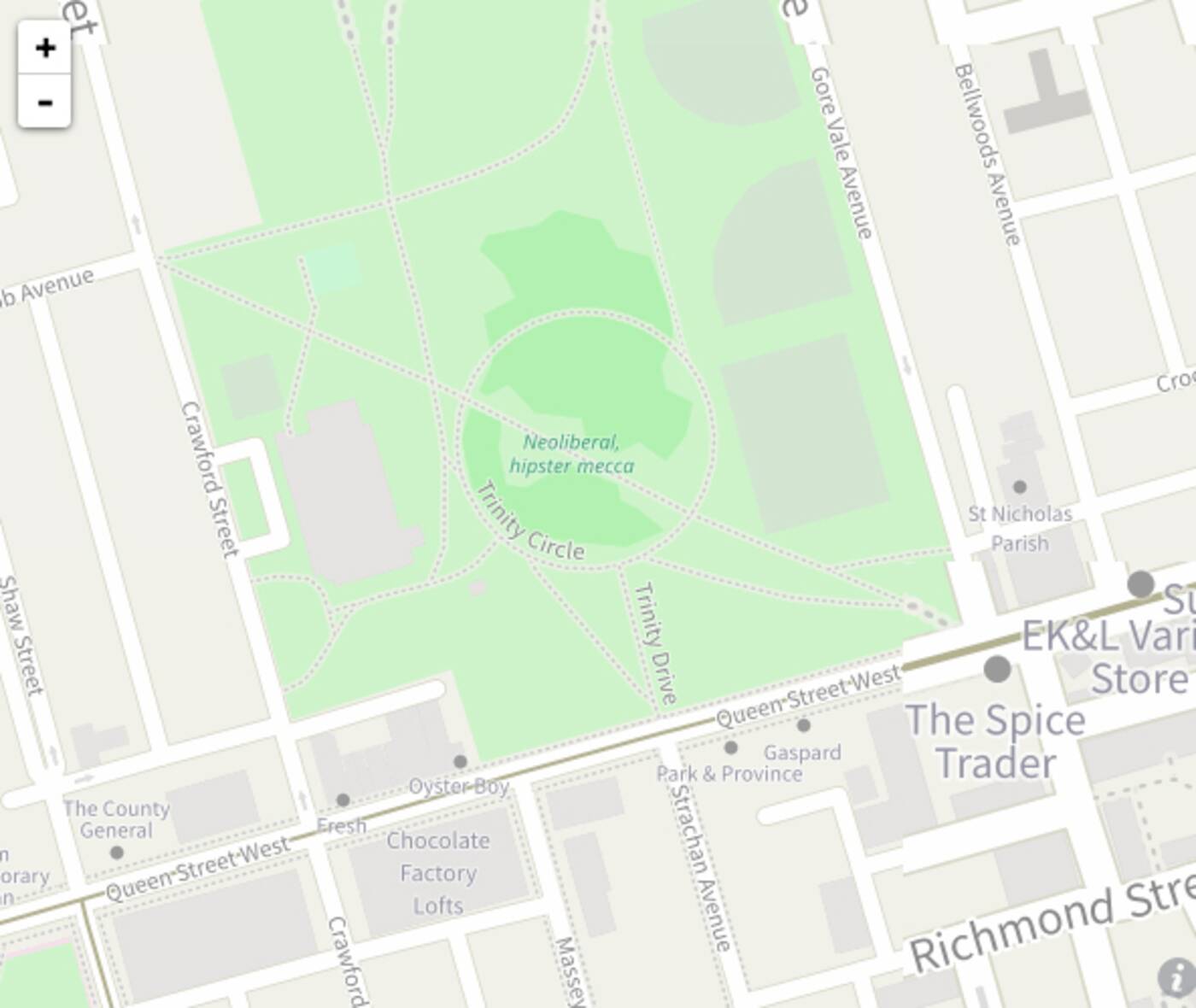 "It's funny cause it's true," wrote one commenter in response to Julliard's post.

"That awkward moment when whomever did this didn't google the definition of 'neoliberalism' before doing this," wrote someone else.

"They're all reading Ayn Rand while eating their avocado toast, apparently."

Hey hipsters, I said it last year and it still appears to be true again this year; it’s the first nice day in Toronto, you better chuck on your tank tops, grab some PBR and run over to Trinity Bellwoods Park or you might miss out on the rest of’em. #trinitybellwoodspark #toronto

As for how the name came to be, well... I could ask Facebook, but then they'd probably change it.

The social network has said in the past that it uses artificial intelligence to populate its maps, which suggests that at least one semi-credible source has publicly deemed the area as such.

I'm not sure where the neoliberal part comes from, but a popular 2013 Toronto parody map by Urbane did label Trinity Bellwoods Park as "Hipster Mecca," which may have something to do with the strange Facebook label.

I am considering opening a flash shack in Bellwoods where Hipsters can buy dolphins, ying yangs, geckos, dragon flies... only the classic press on tattoos

Whatever the case, it's a funny happenstance. Funny because it's true.