King Street restaurant owners have started to backtrack after uproar regarding a series of middle finger ice sculptures were erected in response to the King Street Pilot project.

Kit Kat owner Al Carbone was the first to commission a big honkin' middle finger outside of his establishment in protest of the King Street Pilot, and other restaurants quickly followed suit.

Well as of yesterday there are 6 of them around the area. More to come. #KingStreetPilot #kingstreetmatters

Since the pilot began, King Street business owners were quick to speak out about the project, claiming that it threatens their businesses by reducing foot and vehicle traffic in the area.

So which other King businesses support the #KingStreetPilot and want to put their hand up instead of a finger? #TOpoli pic.twitter.com/7UxCggByY6

Mayor John Tory addressed concerns during a press conference by reminding everyone that "King Street is open for business," while the city tried to attract pedestrians back to the area with ice sculpting and other activities.

I live & work on King St. Restaurants I visit r on King or Queen. Transit rider, cyclist AND driver. Starting a blacklist of businesses that are giving me the middle finger. So far KitKat (obvs), Porchetta, Office Pub and Rodneys. Others I need to add? #kingstreetpilot

Many took offence to the ice sculptures and were quick to criticize the move on social media prompting some owners to reverse course in response to public pressure.

This King street ice sculpture thing is making me want to start up a Darwin awards for restaurants and bars. It’s not just the lack of hospitality involved in the FU sign, it’s also the declaration that you’re with Doug Ford. Bye bye 416 clientele.

He was spotted meeting with a group at Kit Kat and has continued his criticism of what he has called a "reckless plan".

@JohnTory has destroyed King Street businesses. #fordnation will be having an event on king street to help these businesses. Stay tuned for time & date! #Toronto #kingstreetpilot

A middle finger erected recently next to Portland Variety is now relegated behind a fence next to a recycling bin. 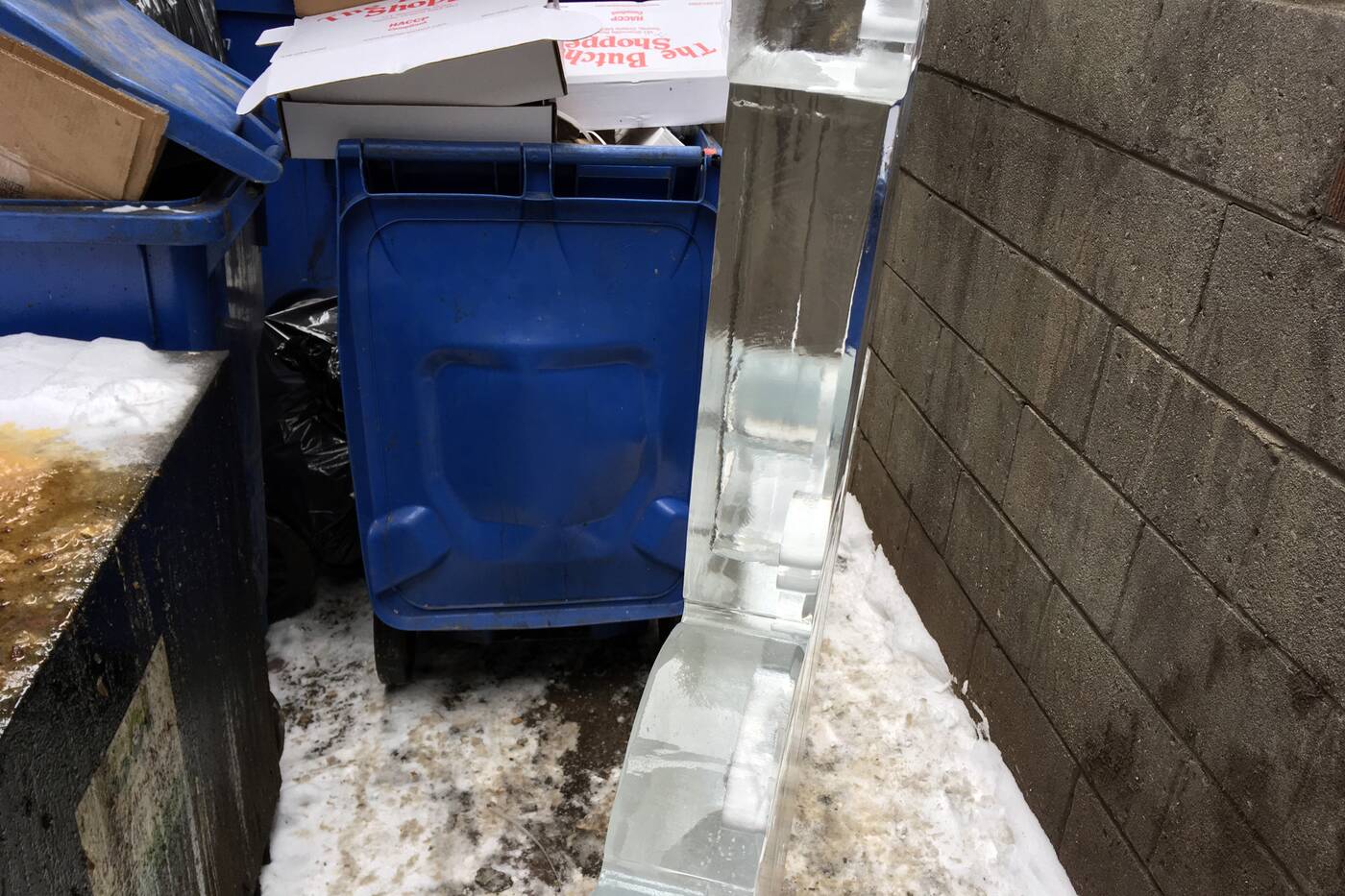 This middle finger ice sculpture is now behind a fence beside the recycling bin next to Portland Variety. Photo by blogTO.

Another near the Forget About it Supperclub seems to be decapitated with only the base remaining.

For their part, Portland Variety has chimed in stating they had no involvement in the ice sculpture and have tried to re-assure customers that they would never direct their frustrations at commuters and that any unrest is solely directed at city officials.

Although we have no involvement with the installations we are pretty sure that's john Tory and Joe Cressys middle finger directed at king st businesses. You have the wrong spin on things. No business's would be flipping off TTC riders. We support an improved system for all.

How this ultimately shakes out is anyone's guess.