There’s a small stretch of Gerrard Street East that is home to perhaps the most diverse group of storefronts. Some are closed down, boarded up, and for sale, while others are successful businesses selling everything from ethically-sourced chocolate to Vietnamese produce to premium cheese.

This section of Gerrard is home to East Chinatown, a neighbourhood that is seeing explosive growth and revitalization. While many Toronto citizens are familiar with so-called “regular” Chinatown, located along Spadina, many are unaware of this small but thriving community sandwiched between Riverdale and Riverside.

The neighbourhood has seen many changes over the past few decades. It has gone from being the home of those moving away from rising rent prices in Spadina’s Chinatown, to a downturned, somewhat-abandoned street, and back into an up-and-coming new destination for those seeking something new.

One familiar Toronto restaurant will soon be a new face to the East Chinatown community. Lady Marmalade, which has called Leslieville home for a few years is now moving to the area. 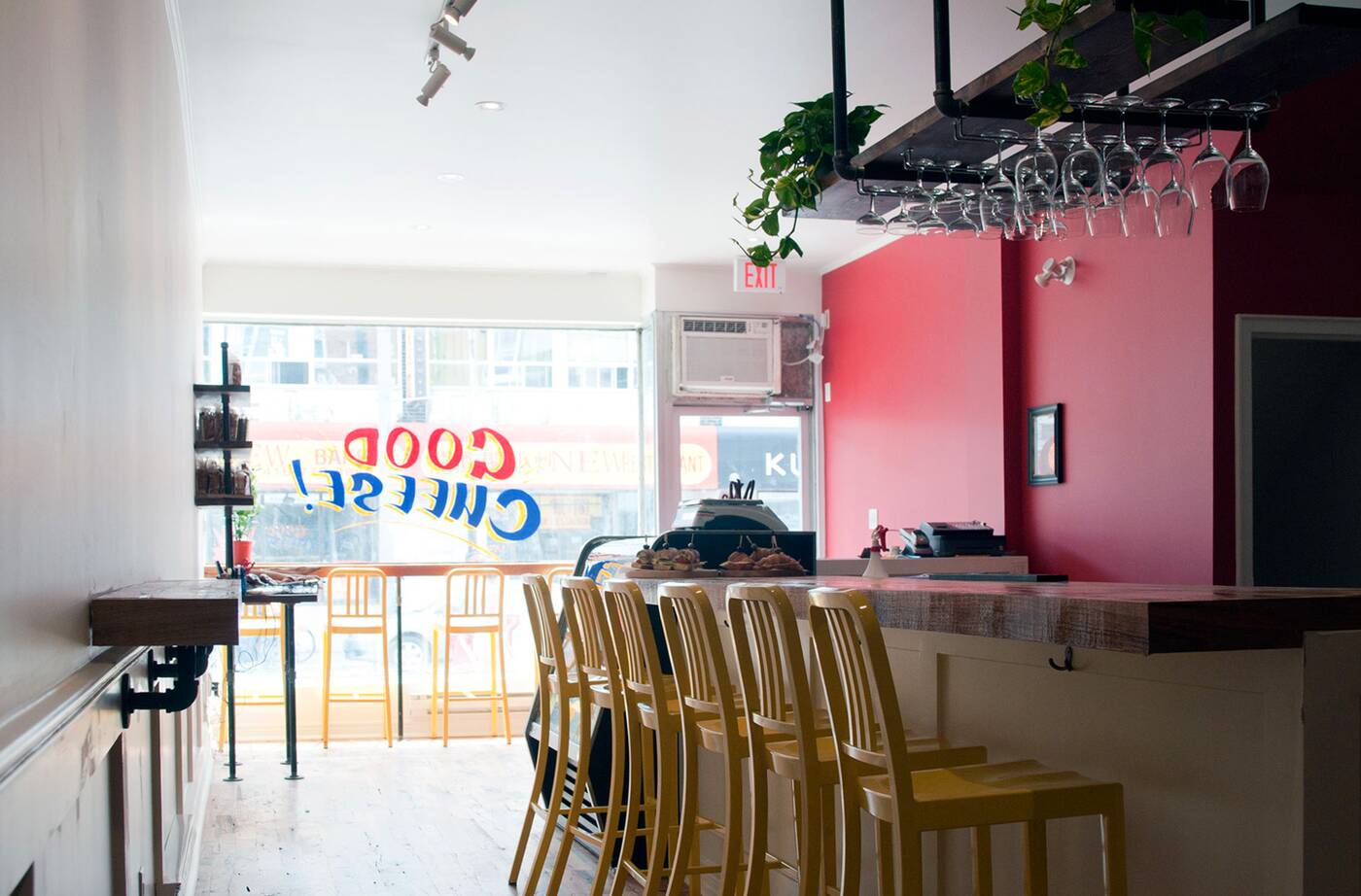 Good Cheese is not only a cheese store but thanks to a liquor license also serves wine and drinks. Photo courtesy Good Cheese.

Natalia Simachkevitch is co-owner of Lady Marmalade. She says that rent is much cheaper in East Chinatown, but the decision is a smart one for many reasons.

“East Chinatown is uniquely alive," she says, "It has so much potential. It's always fun to be a part of an evolving community."

She notes that Leslieville is still nearby, so Lady Marmalade will still be part of the same community, but that the new location was “the perfect new home.”

Luke Champion and Adrian Zgeb recently opened Good Cheese, a small establishment that sells premium cheese and other products. They also just received their liquor license and construct wine pairings for their products.

“Now is the time for the East side,” Champion says, “the entire area has dramatically changed over the last few years.”

Zgeb and Champion say they were fearful that the community might not embrace a business that doesn’t quite fit in the traditional Asian community, especially since cheese is not a typical choice for many Chinese people who live in the area.

“People around here have been really happy to see something new,” Zgeb says, “we’ve been very well-received.” 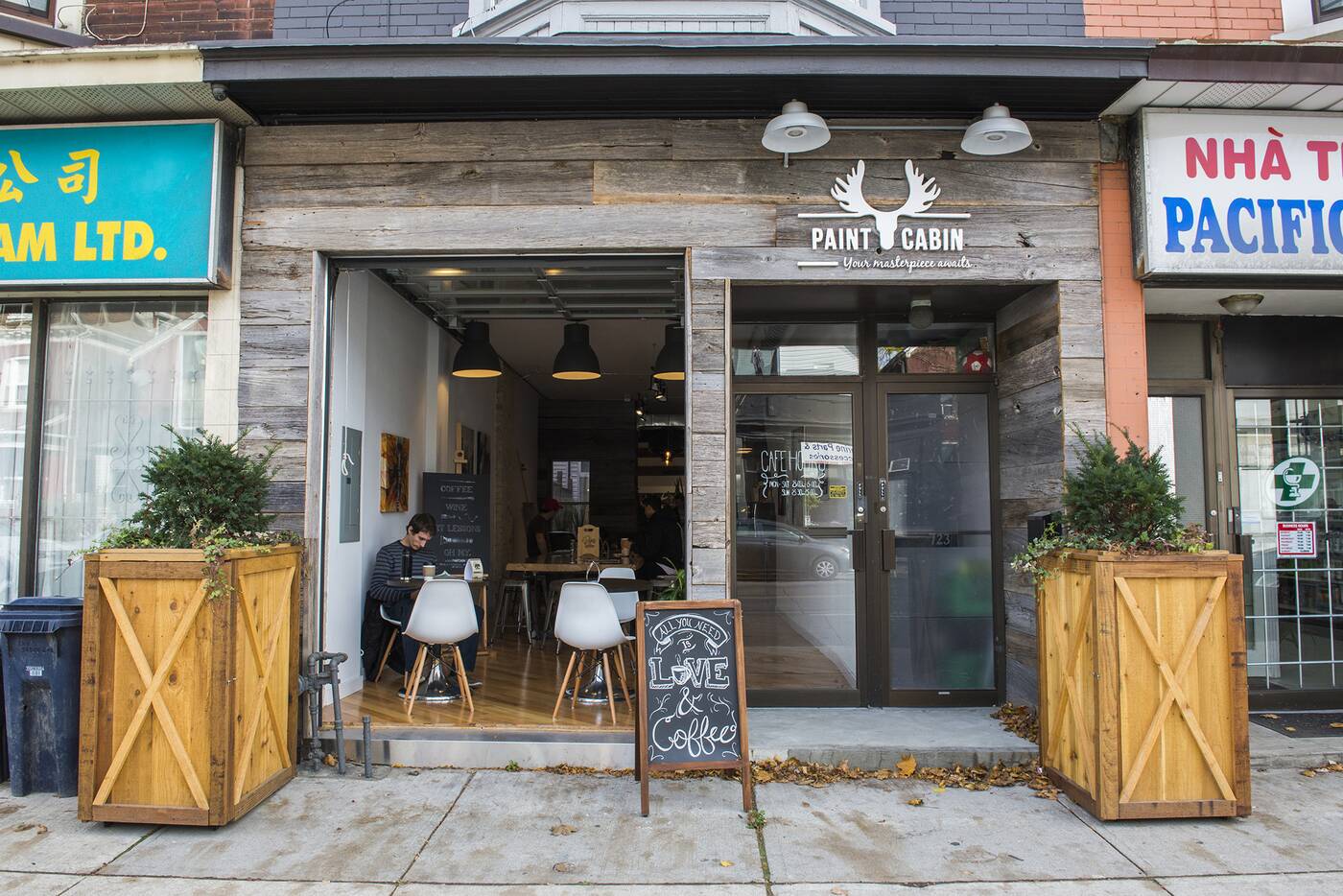 Paint Cabin opened in East Chinatown in 2015. They do painting classes but also serve food and drinks. Photo by Hector Vasquez.

Champion says people are excited to see “new life being breathed into the neighbourhood.”

Andrea Mut agrees. She is the owner and founder of Andrea’s Gerrard Street Bakery, which opened in East Chinatown around five years ago. She was one of the first non-traditional businesses to open in the area.

“I had lived in the area for a while, and there was nowhere to get a cup of coffee,” Mut says, when considering whether she wanted to open a bakery.

“There was stigma around this neighbourhood, and people thought it was funny that we were considering it for the bakery.”

However, Mut says she had fallen in love with the space, and opened her bakery to a flood of success from the neighbourhood.

“The ‘localness’ of the neighbourhood is part of the appeal. It’s a real community of people,” she says fondly. “People have started clueing in that it’s a really nice, and really fun neighbourhood.” 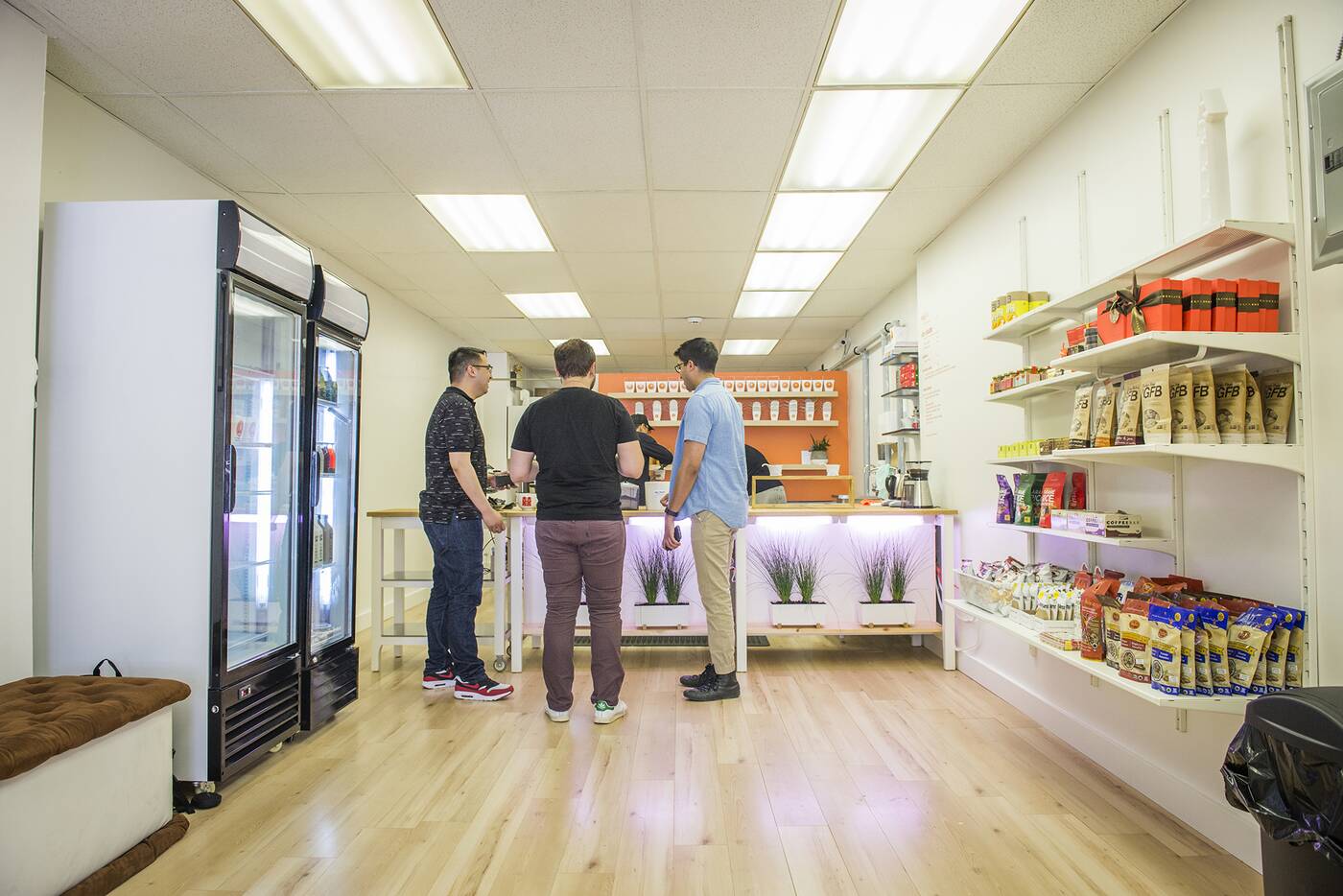 A few doors down from Andrea’s Bakery is Wong’s Ice Cream. The small but very cozy ice creamery has been viral on Instagram over the past few months for its black sesame and salted duck egg ice cream.

Owner Ed Wong is ecstatic that his shop has been so well-received by the neighbourhood. Part of his success, he says, is from the traditional Asian flavours he uses in his treats.

Wong laughs, “I wanted to open my place in a sleepy neighbourhood, but it’s becoming quite the destination!”

He says he worried that people may not support him, Good Cheese, or Andrea’s Bakery out of fear of gentrification, but he has seen people saying the opposite now. They’re excited, he says, to have new places helping to make the community the place to be.

“People just want to see their area succeed,” he says, “and I think that’s happening now.”

Wong’s sentiments are easy to understand given the state of the neighbourhood. While many new businesses are coming, and established ones are thriving, there remain many empty storefronts. However, the community is doing all they can. 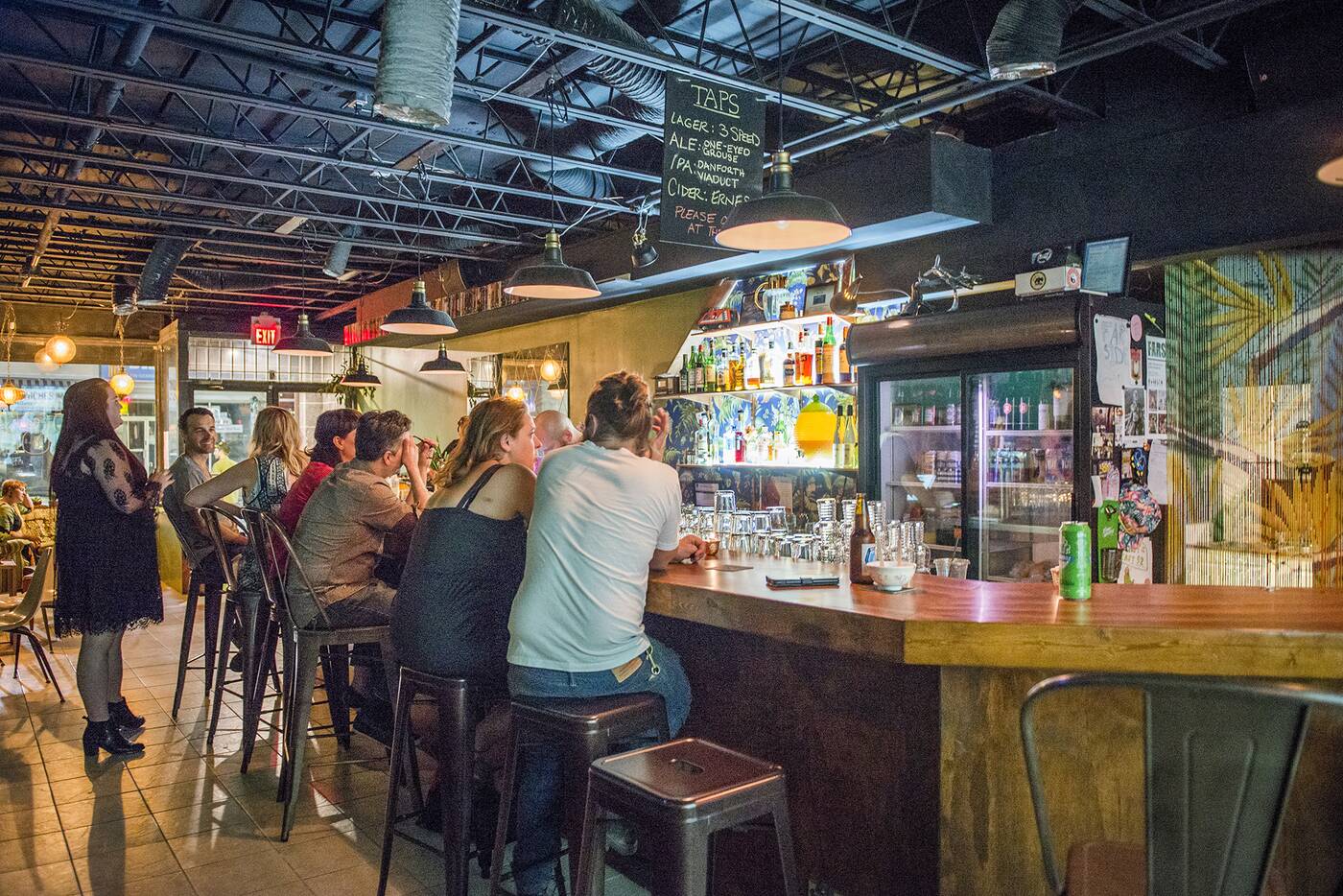 Since opening in 2016, Farside has been a popular bar with locals and has brought some much needed nightlife to the area. Photo by Hector Vasquez.

Valerie Mah is excited to do what she can. As the Vice President of Toronto’s Chinese Chamber of Commerce, she has worked to bring activity and life to East Chinatown. Some of her projects include helping to bring seven large murals to the sides of businesses, and her proudest achievement, the archway over the entrance to town.

“The archway is something for people to be proud of,” she says, “it brings a sense of community and brings people together.”

Mah was principal of the nearby high school for many years, and is thrilled to see the community picking up. She says she wants East Chinatown to be known as a neighbourhood worth visiting, specifically for the diversity and strong community.

The next challenge for the neighbourhood, Mah says, is the formation of a BIA, which would help the area flourish even more than it already is.

“We need to be inclusive here,” she argues, “the new businesses are bringing different types of people, and that’s really a good thing. We have a new cheese shop, and Chinese people don’t like cheese!” 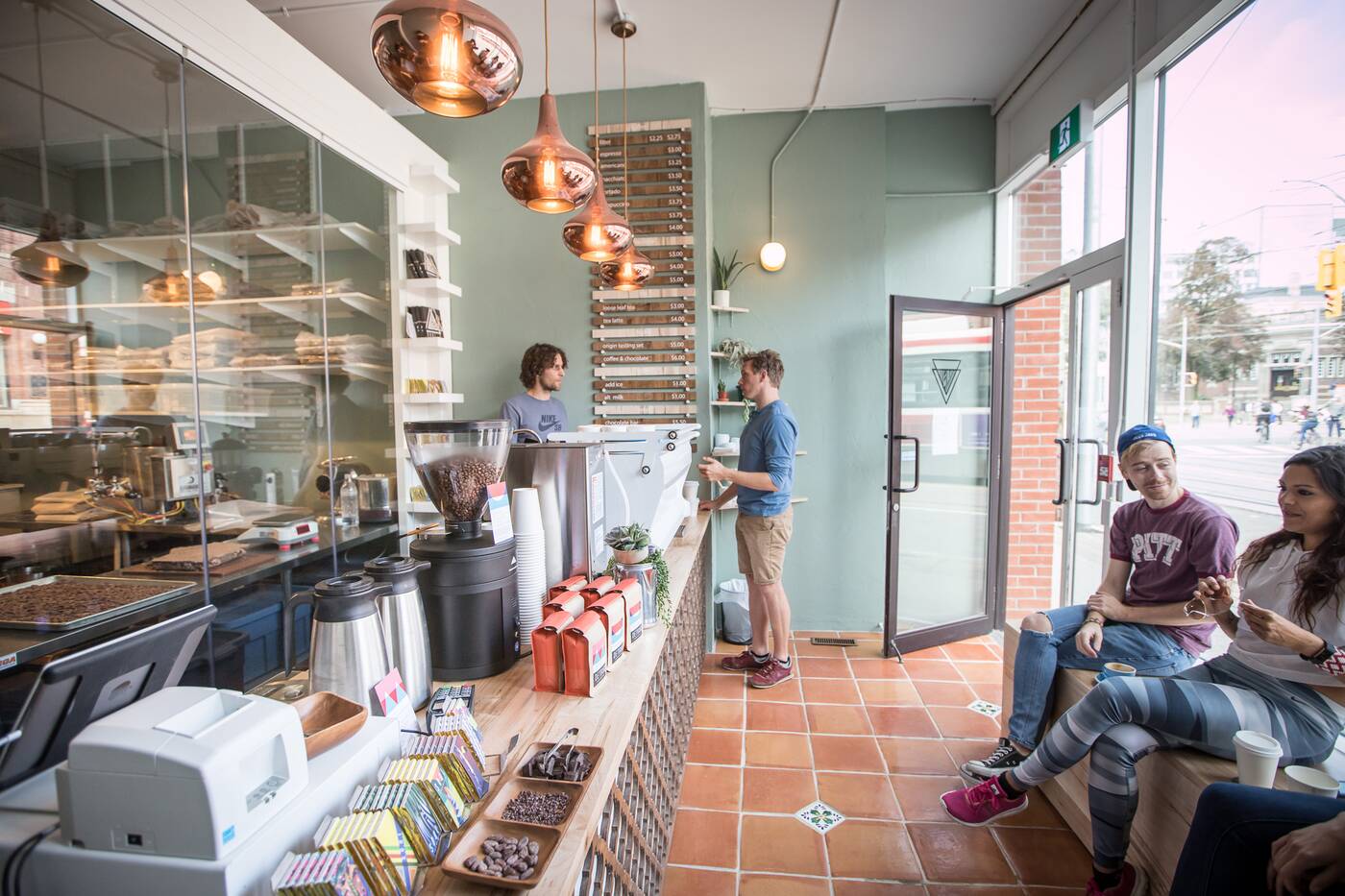 Soul Chocolate makes all their own chocolate in the back of their espresso bar on Gerrard East. Photo by Jesse Milns.

With incredible smells coming from places like Andrea’s Bakery, newcomer Soul Chocolate, Rose’s Vietnamese, and AAA Public House, the street that his home to East Chinatown is changing rapidly.

Fresh new businesses bring different ideas to the neighbourhood in between traditional Asian staples. With the east end of Toronto quickly becoming the place to be, East Chinatown is a place to watch.