The clock tower at Old City Hall is surely one of the most recognizable landmarks in Toronto, but for all its familiarity there's another side to this historic monument that few of us ever get a glimpse of.

This wasn't always the case. Going back to the early 20th century, the public could take an elevator up to the observation deck just under the clock face of the 340 foot tower. From there, they could look down Bay St. to the harbour and beyond. 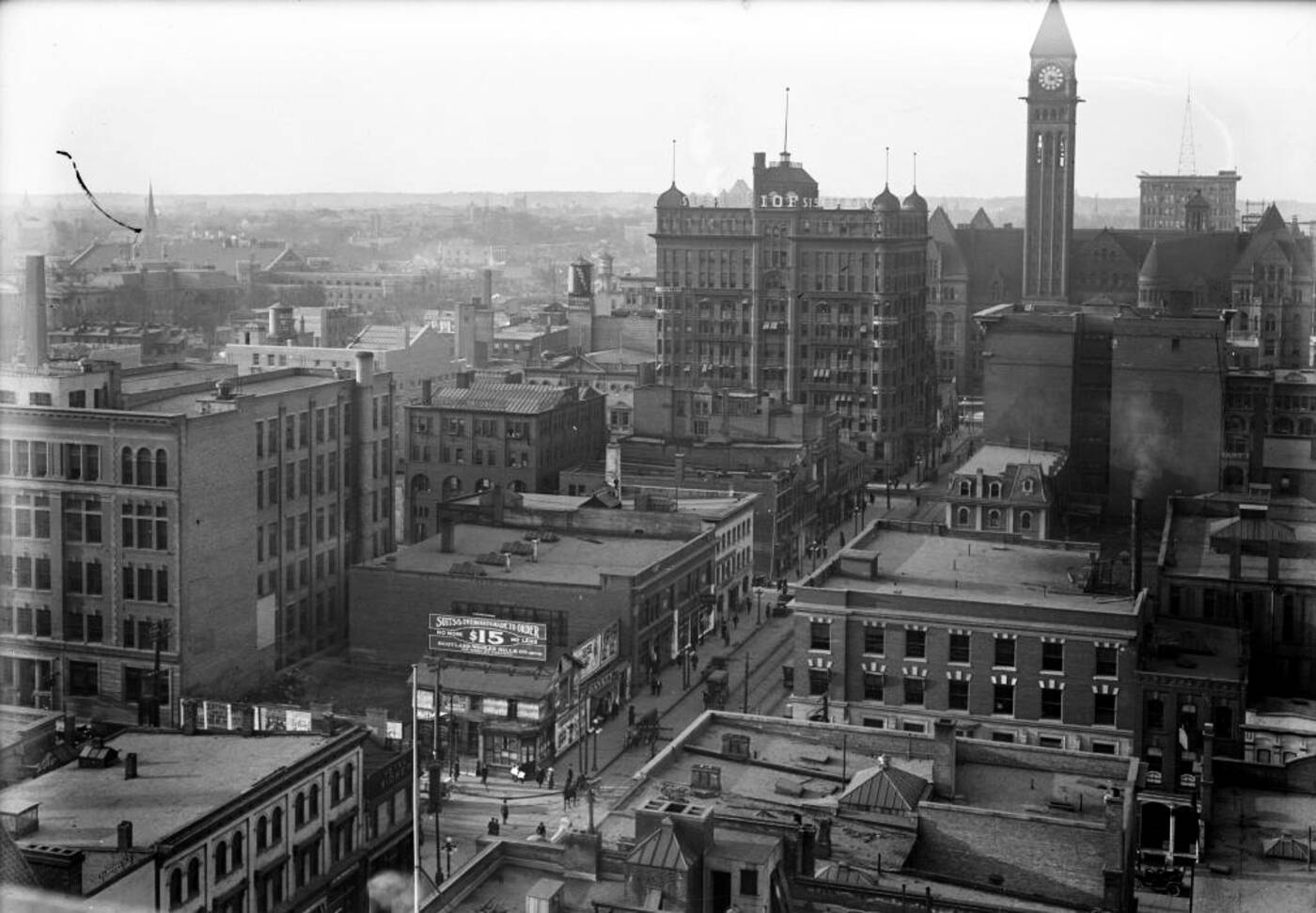 Looking north towards City Hall in 1910. Photo by William James via the Toronto Archives.

These days only one person gets a regular look from this vantage point. Horologist John Scott of Scotiabell maintains the grand old clock that's sat at the top of Old City Hall since 1899 (it was dramatically activated for the first to ring in the new century).

I had the chance to meet the affable Scott and take a trip up the tower as part of filming for Unseen Toronto. The producers will probably cry a little if I reveal too much of this remarkable hidden space, but I'll offer a sneak peek of our episode with the photos I grabbed on my phone. 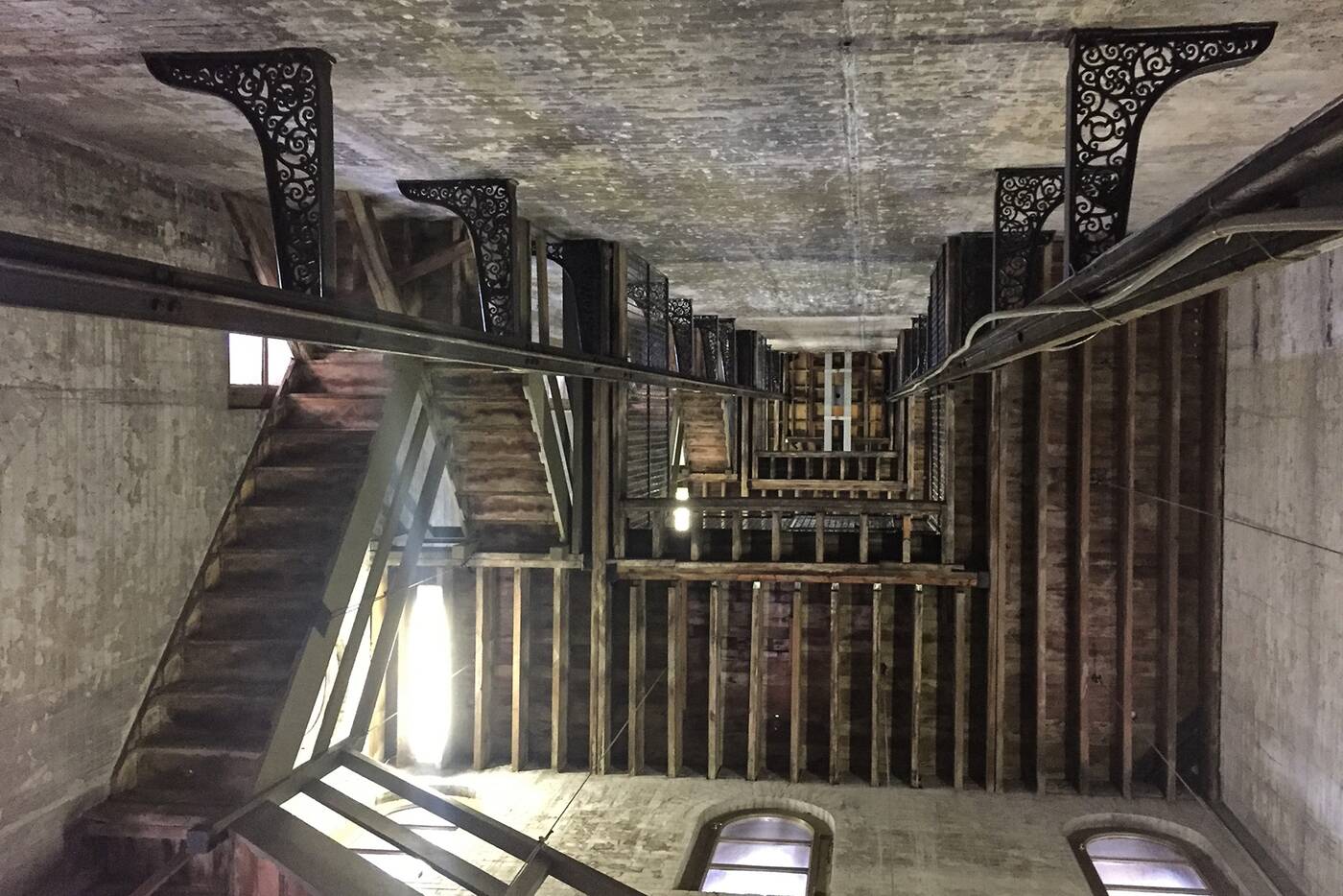 This is looking up from near the bottom of the clock tower, but the direction can be difficult to discern at first glance. Photo by Derek Flack.

The first thing that happens when you start to ascend the clock tower is that you feel as though you've stepped into a M.C. Escher drawing. The manner in which the stairs wind around the perimeter of the structure is somehow profoundly disorienting. 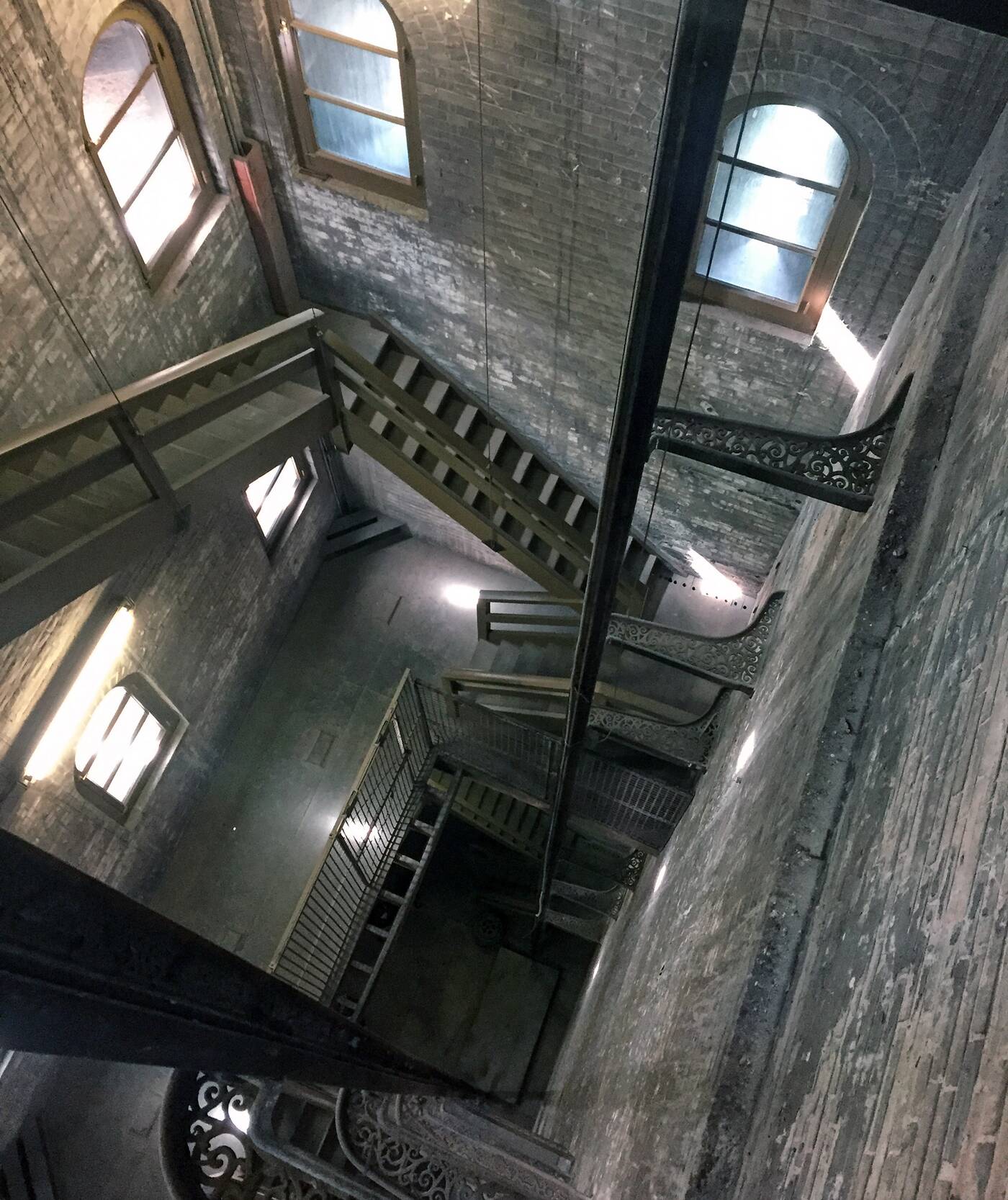 Once you near the top, the perspective finally makes sense and you can gaze down at the elevation you've gained while marvelling at the iron rods that remain from the days when the elevator operated. 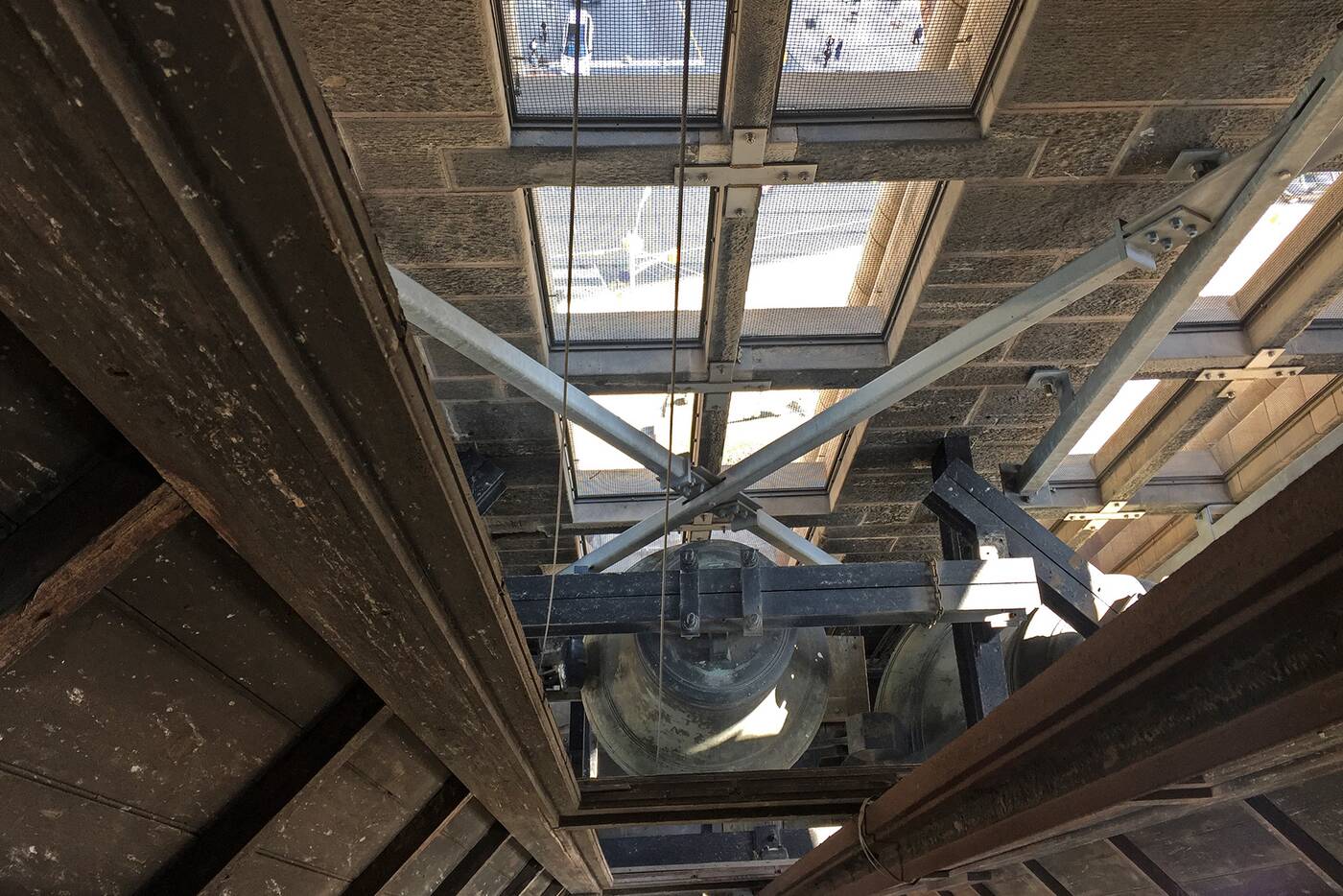 Looking down at the bell that's kept Toronto's time for some 117 years. Photo by Derek Flack.

It's actually quite amazing to think the public was allowed in here on a regular basis. So many of our most interesting observation decks have been lost to the soaring appeal of the CN Tower, but the lost spaces have a cachet that's unmistakable. 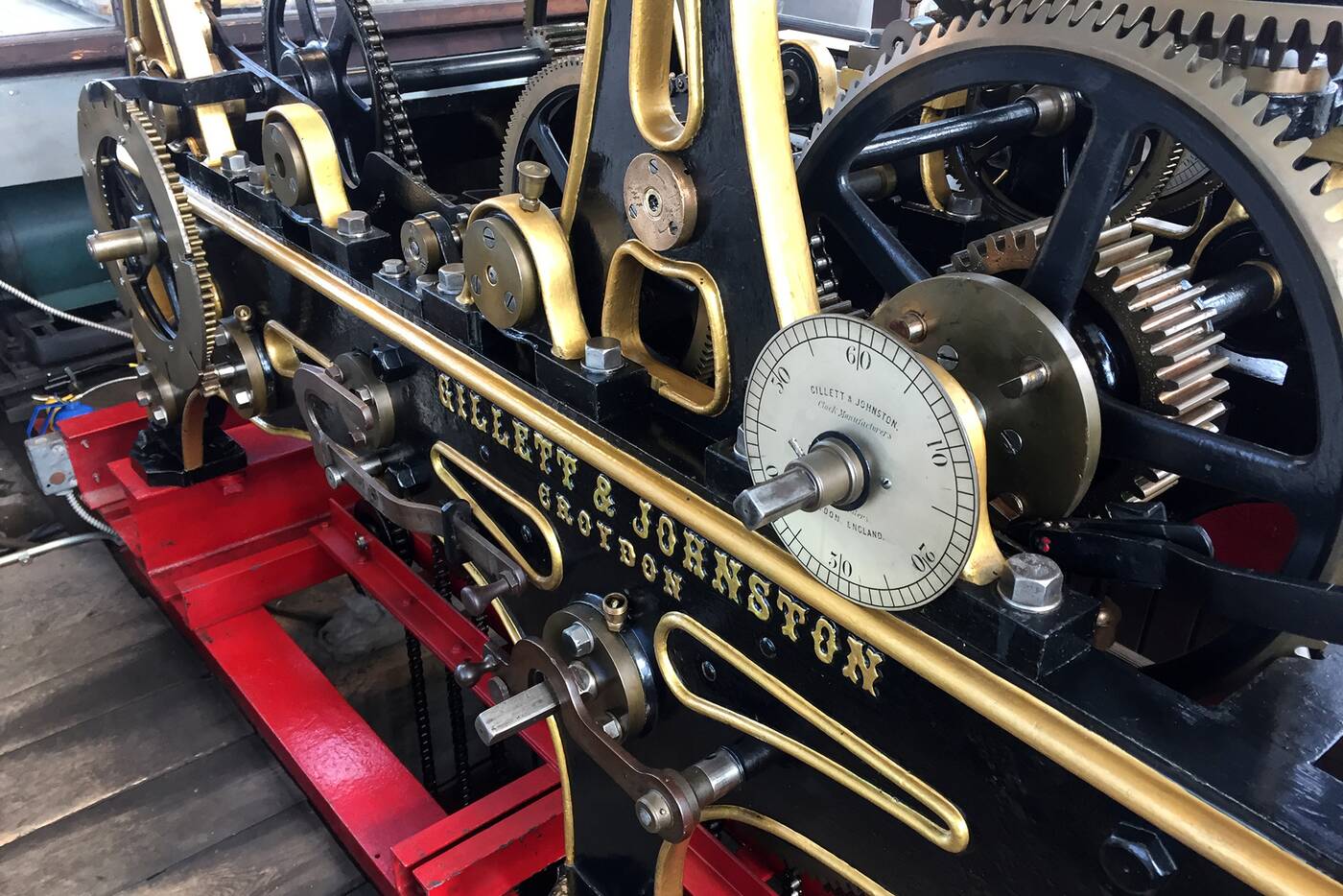 It was a remarkable feat to install this Gillett and Johnston clock at the top of the tower in 1899. Photo by Derek Flack.

As intriguing as the climb up the tower is, the most fascinating part of a visit to the clock tower is certainly the clock itself. This is one mind boggling piece of machinery that, save for a few minor modifications, functions just as it did when it rang in the 20th century.

Scott makes the trip up the tower about once a month to ensure that the time is accurate. His visits used to be more frequent, but he has it running so smoothly now that less intervention is required. 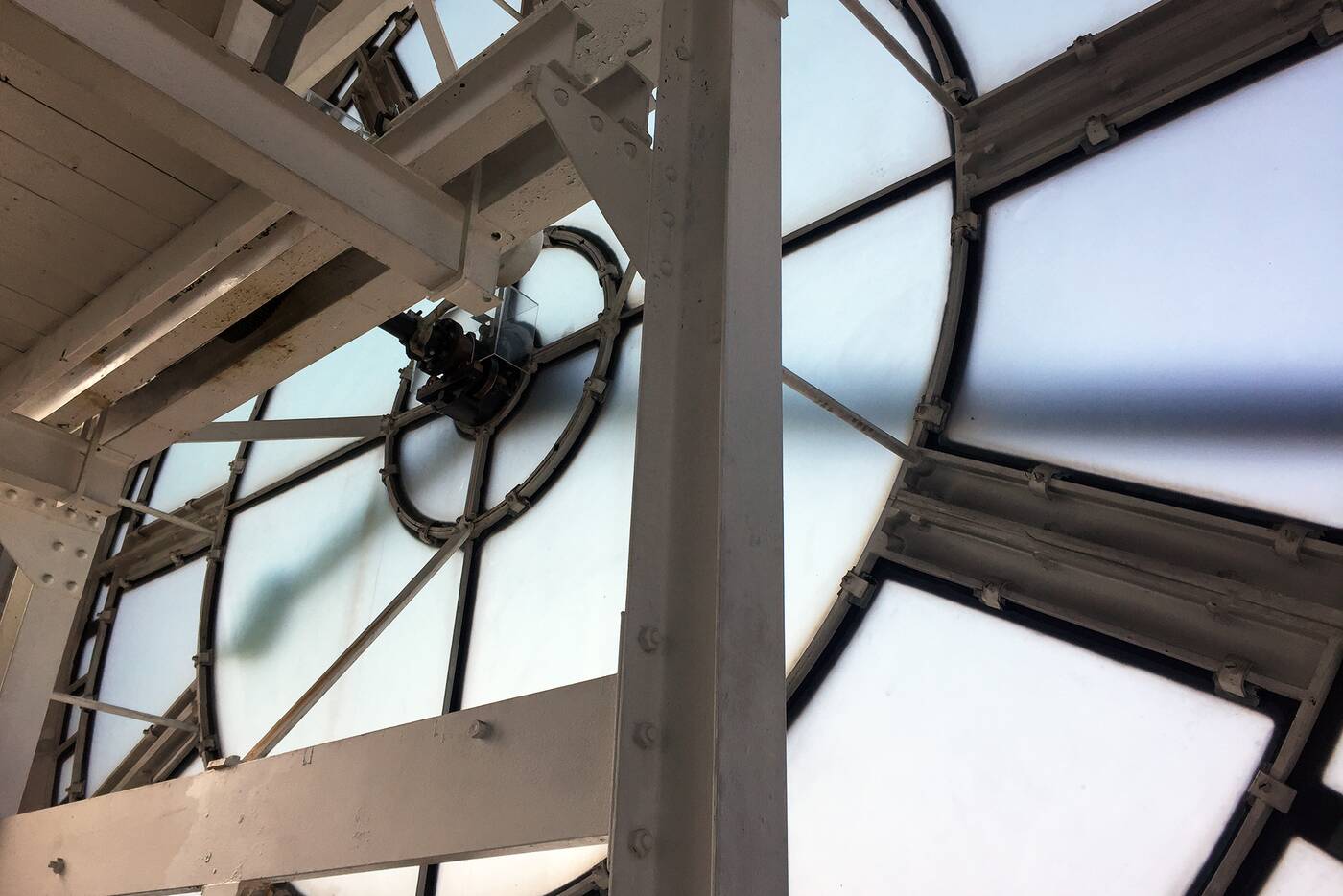 The other side of the Old City Hall clock face. LED lights are now used to illuminate the giant time piece at night.

"It's part artwork and part machine," he tells me as he explains the basic mechanics of the elaborate instrument. What you can never communicate in a picture is just how wonderful and calming the mechanism sounds as it ticks away the moments.

In this room at the top of the city, which is bathed in light pouring in through the glass clock faces, a noticeable calm washes over those of us who've been lucky enough to witness this place. Even Scott, who's been up here countless times, understands how special it is. 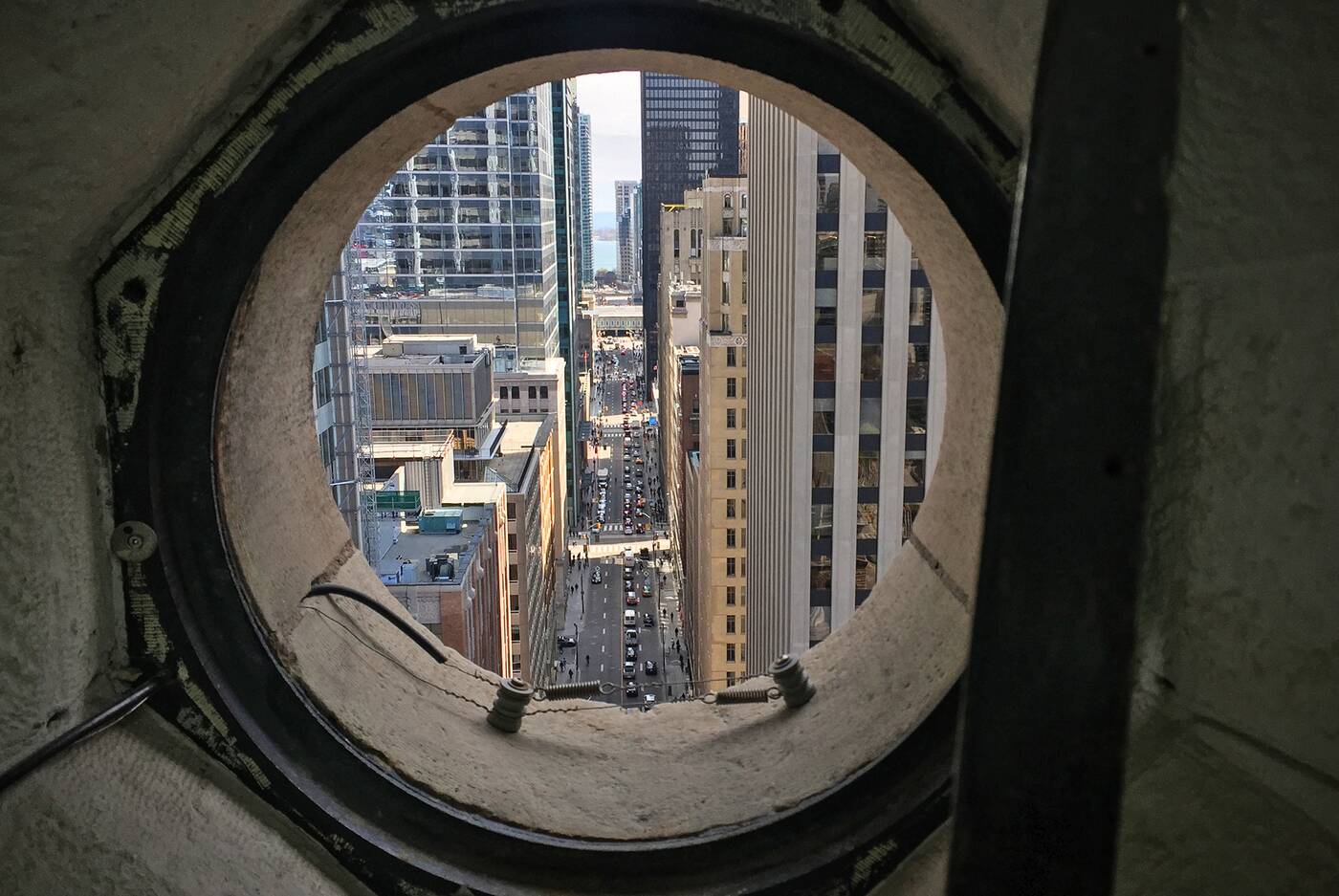 The view down Bay St. from the Old City Hall clock tower. Photo by Derek Flack.

Before we leave, he opens up one of the portals to the outside world. From ground level, these tiny circles look tiny, but they offer a stunning view of one of Toronto's main corridors and invite a gentle breeze into the clock room.

When it comes time to leave, I'm hesitant. I doubt I'll make it back up here again, and I want to enjoy the moment. And then, right on cue, the clock strikes 4 p.m. and the air reverberates with the sound of the bells below.