Toronto's newest office tower is one of the nicer additions to the skyline in some time. You've probably already noticed the EY Tower rising in the Financial District, even if you didn't know its name.

It's the angular blue glass one that now competes with the view of First Canadian Place when you look south from City Hall. From a distance, the thing that makes the Kohn Pedersen Fox and WZMH-designed building distinct is its clean lines crystalline roof, but looking at it from its front side, a whole different picture emerges. 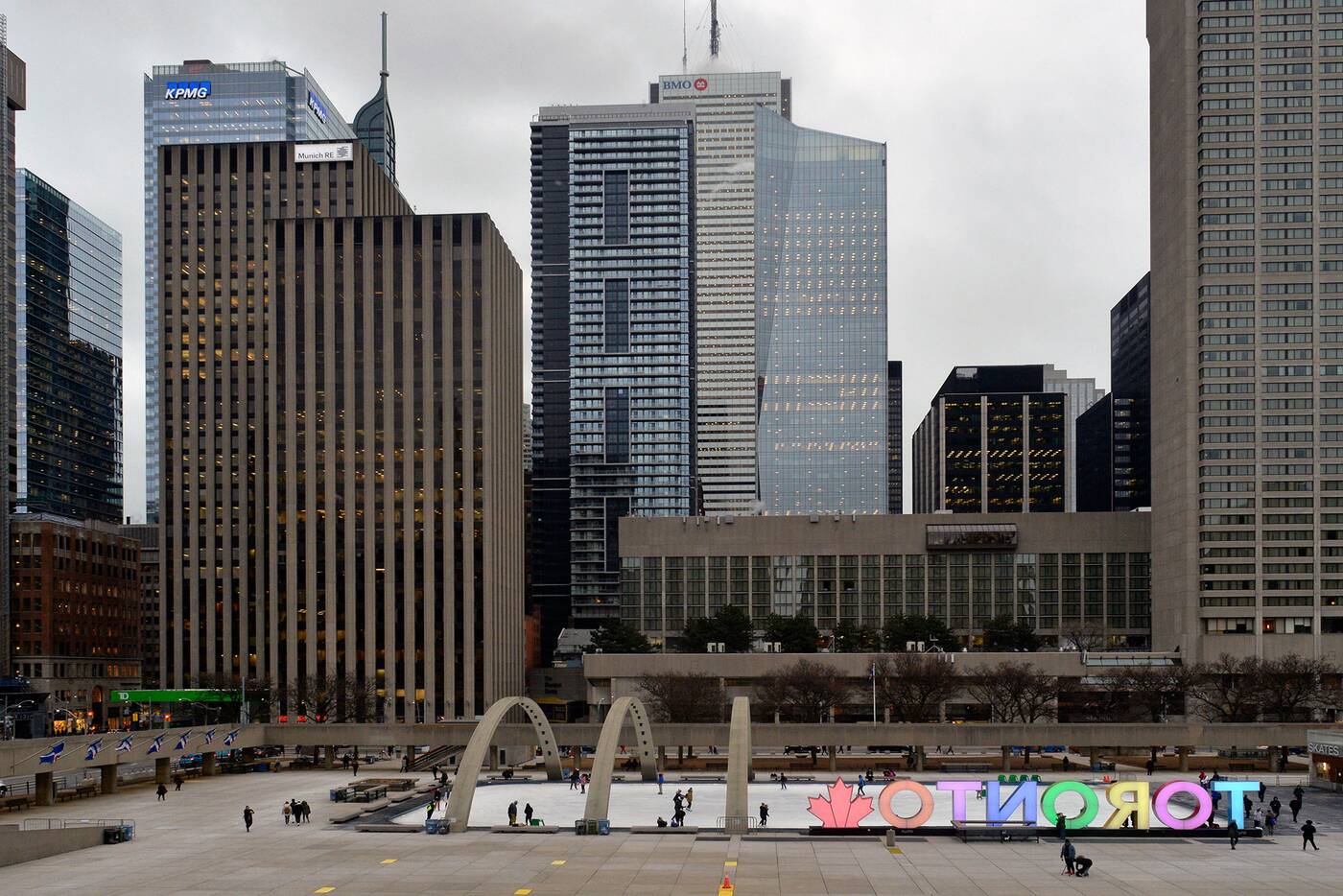 Rewind two decades and this was the site of considerable controversy. 100 Adelaide St. West had long been the home of the Concourse Building (1928), but after being purchased by Oxford Properties, plans were put forward to demolish the original building, which the city approved in 2000. 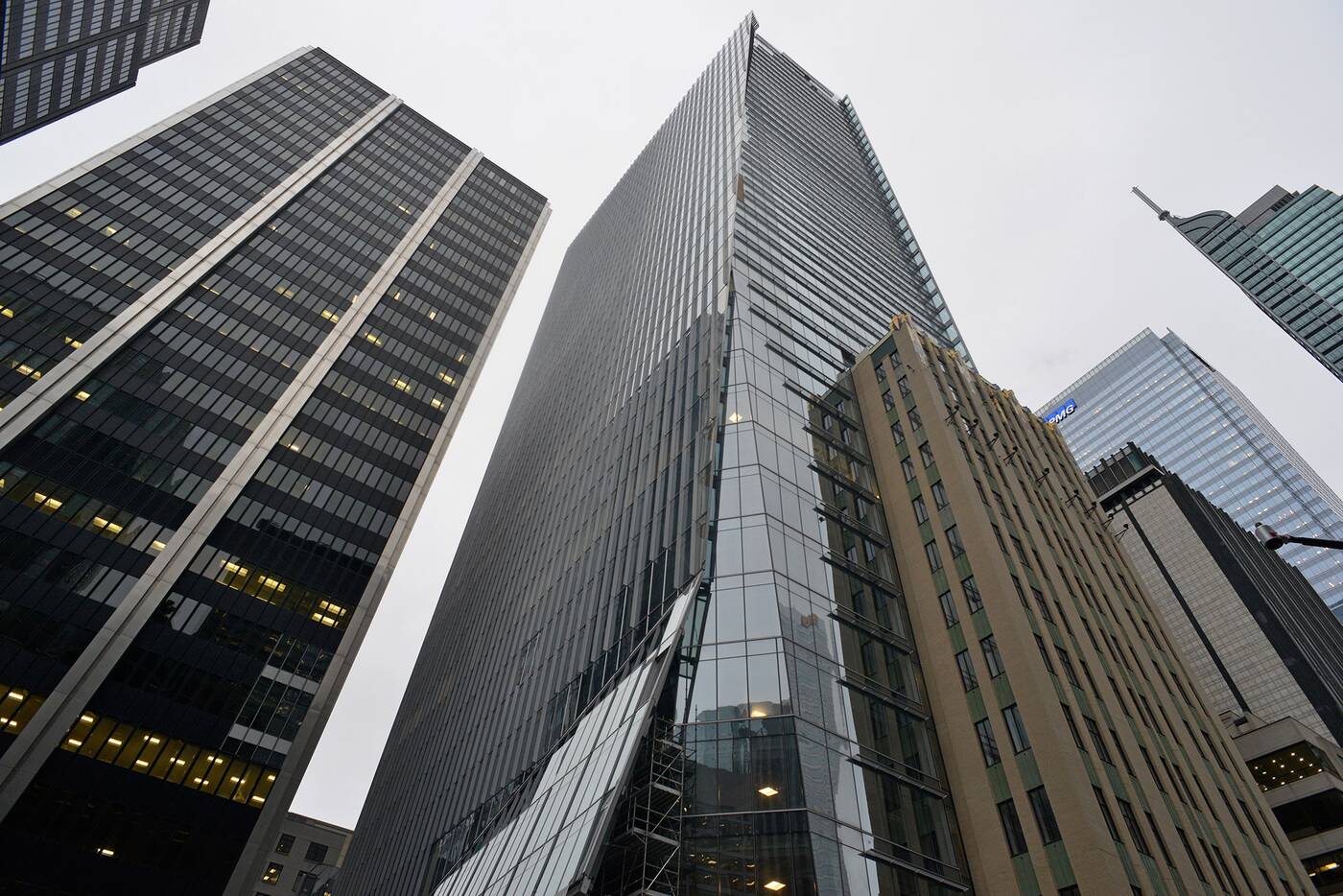 There was always a plan to preserve elements of the original Art Deco building, but despite its poor condition, cries of facadism were hurled from critics of the new development.

It would take more than a decade for plans to finalized for the new tower, but as they were honed, the picture that came to light was of a gorgeous-looking modern tower rising above the prominent shell of the Concourse Building on the south and east sides. 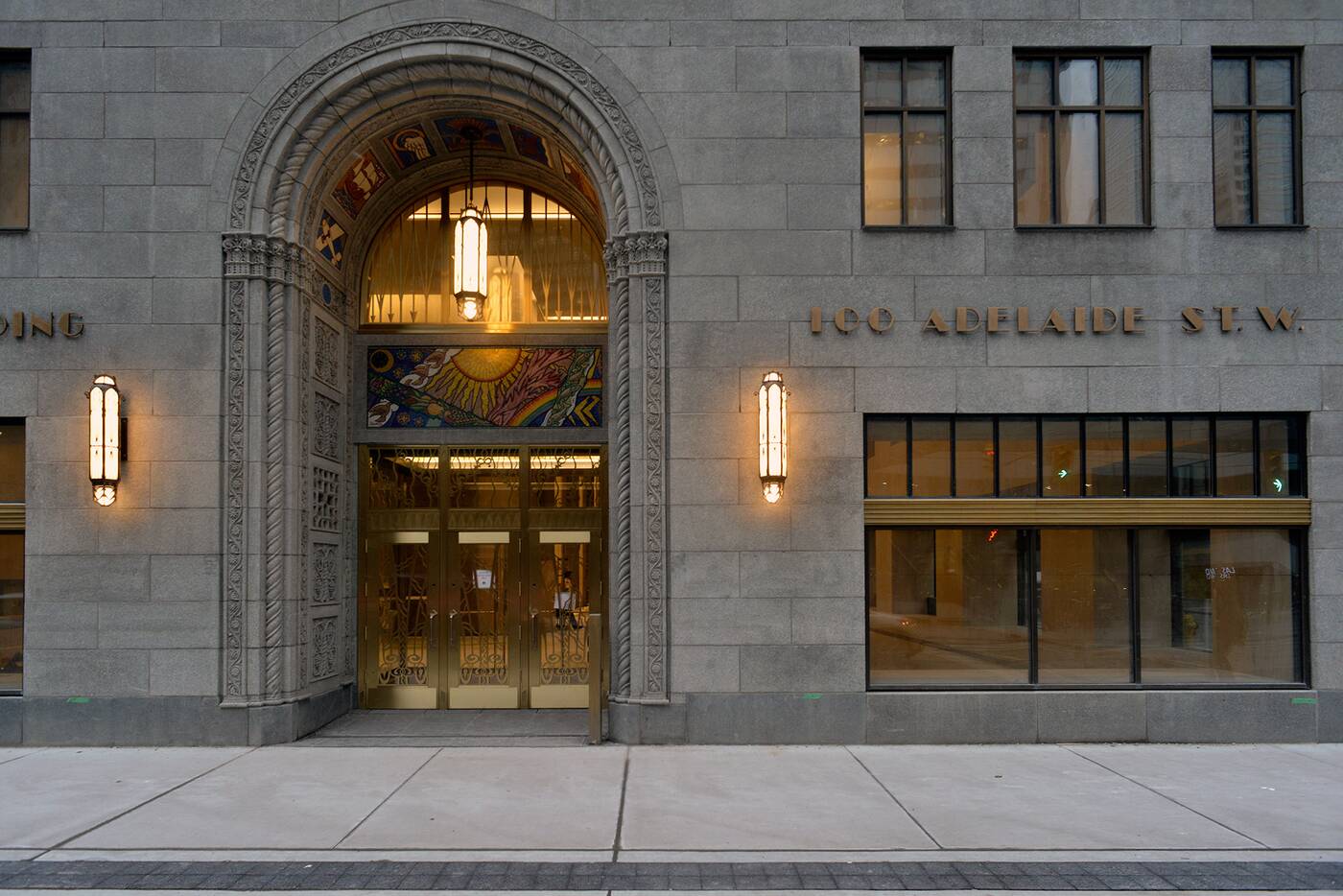 I've always felt a certain ambivalence toward the project based on a desire to preserve older buildings with considerable design merits and the feeling that this project did just enough to ensure that the original structure maintained an important part of the streetscape. 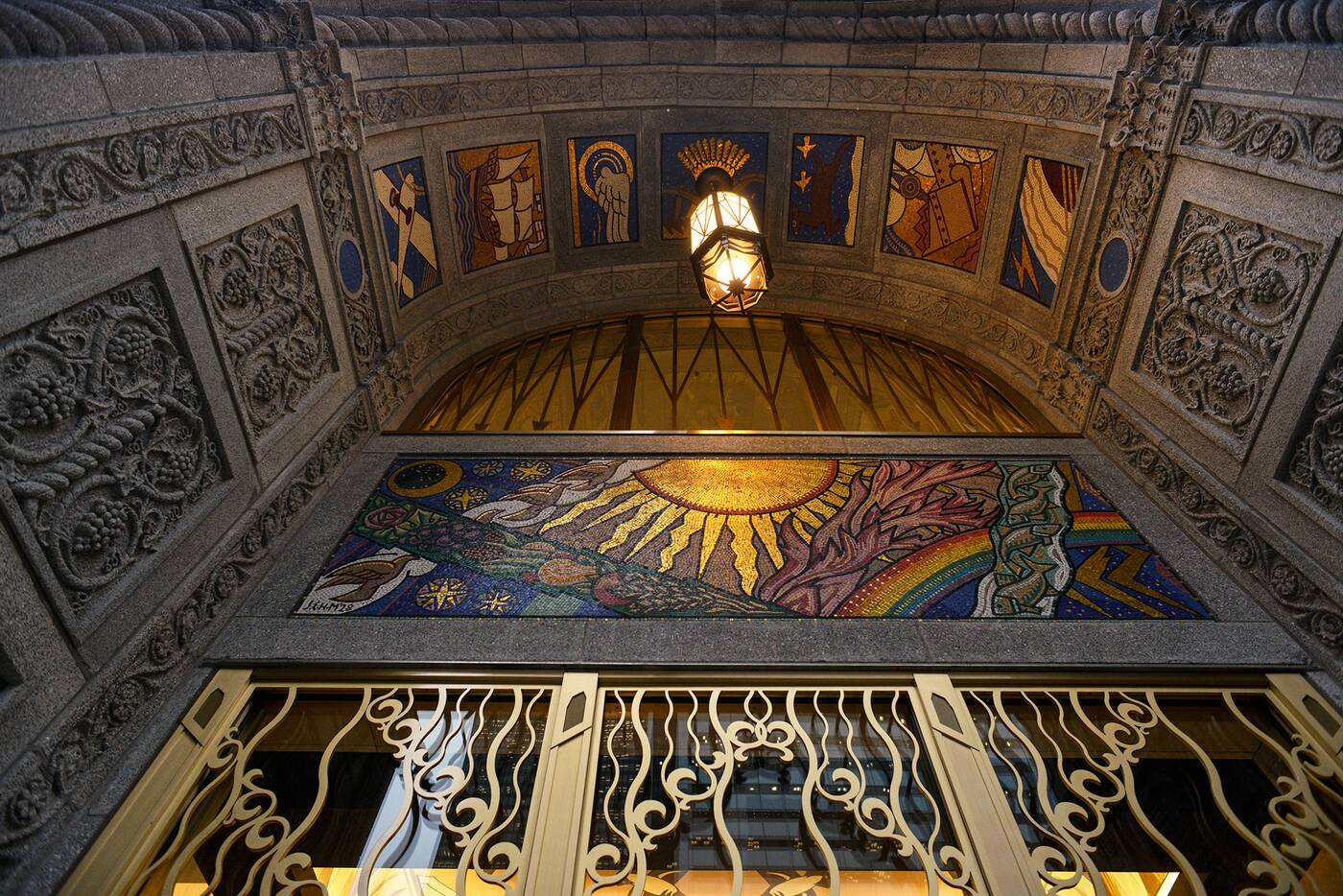 Now that the project is nearing completion (it topped off last June), the integration of old and new becomes more clear.

GBCA Architects has done a bang up job on the rebuilt facade, restoring the J.E.H. MacDonald mosaics that line the prominent arch entrance, and restoring/rebuilding the exterior flourishes that made the Concourse beautiful in the first place.

If you squint your eyes while walking along Adelaide, it possible to block out the newer structure and imagine that you're walking along the street in when the Concourse Building was first completed. It doesn't last long, but brief moments like these are worth cultivating. 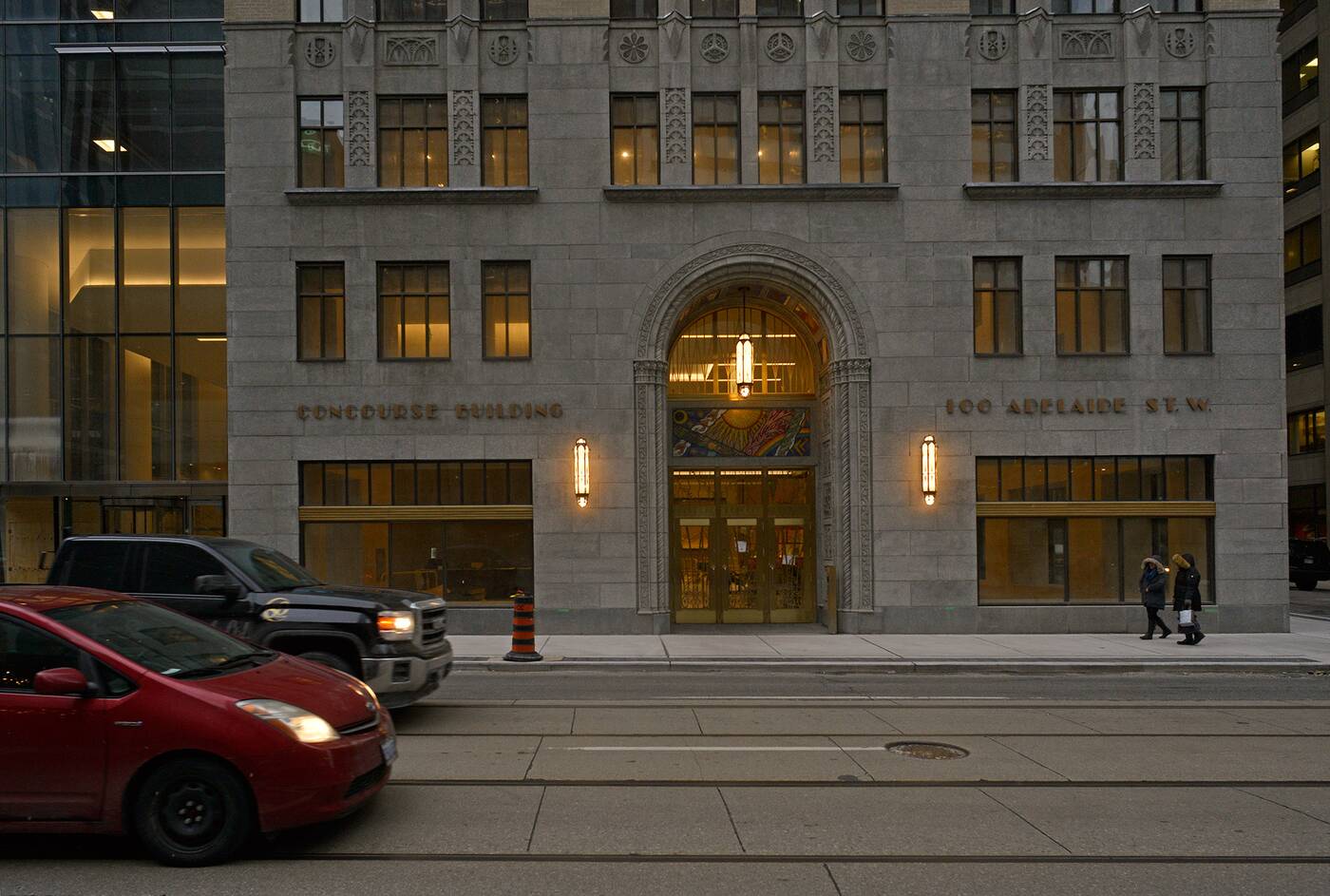 There's still work to be done on the interior of the building, including the ground level, which is supposed to retain some of the character of the original. It's hard to tell exactly how this will play out right now, but if the exterior is any indication, there's reason to be confident.

Perhaps the tolerance for facade preservations like this one go up when the new building passes the design test. Or perhaps the effort to restore elements in a meticulous manner allows us to have faith in the new builders.

When the EY Tower opens for business later this year, the spirit of the Concourse Building will remain. A ghost it will be, but perhaps a happy one.