Why do condo elevators in Toronto suck so much?

There's nothing quite like walking up 20 flights of stairs after a long day of work. But taking the stairs is a common activity for many of Toronto's condo dwellers.

In July, The Canadian Press revealed Canada's elevator crisis. In Toronto alone, 9-1-1 received 2,862 elevator rescue-related calls. More elevators mean more problems, writes the Canadian Press, noting that there's been a 10 per cent increase in the number of elevators in Ontario over the past five years.

When the elevators at Aura - Canada's tallest residential building - went down on July 25, CBC reported that we have a shortage of elevator technicians. And without enough technicians, elevators sit stationary for longer than they need to. 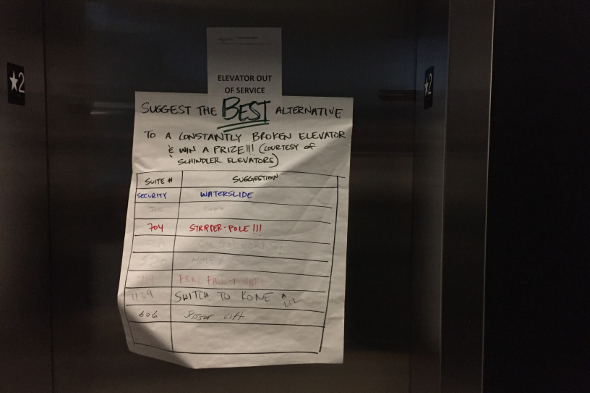 This snarky-sounding contest sprung up recently at a building in the the Canary District. Apparently the elevator has been out-of-service since July. Maybe a fireman poll would actually be an efficient solution.

And while broken elevators might be annoying, these outages make buildings inaccessible and they can also be dangerous, especially in an emergency. Torontoist writes that it's already difficult for paramedics to reach people in high rise buildings thanks to small, slow elevators - these problems only get worse if elevators break down.

Perhaps we're noticing this problem even more now because of the influx of taller and taller buildings. Elevators need to service a greater number of floors and people. According to Toronto Life, between 2003 and 2013, there were 118,000 development applications filed within Toronto's core.

And in many parts of the city (including at Yonge and Bloor, for example) we can see soaring towers spring up. So we'll have to wait and see whether these stalled elevators start moving any time soon.

Photo by Katrin Ray in the blogTO Flickr pool.