This almost made riding the TTC completely different

Sometimes the most mundane things end up shaping our connection to the city we live in. Case in point: the seating layout on TTC subway trains. It's a small thing, but if you've ever ridden on an MTA subway car, you know that the individual cushions and varied seat configuration of Toronto's trains is actually one of those things that our much maligned transit provider got right.

When designs for the Toronto Rocket trains were under consideration, however, the TTC almost opted for perimeter seating. The primary reason such a configuration was proposed had to do with safety. Having all the seats against the walls of the car makes it easier for emergency workers to navigate. It also makes it more difficult to hide bombs aboard trains.

While that might seem a bit dramatic, back in 2006, when the earliest designs for the Toronto Rocket trains were being drafted, perimeter seating was a very real possibility. The TTC even went so far as to mock up one of its T1 trains with such a layout, though it was never open to the public. 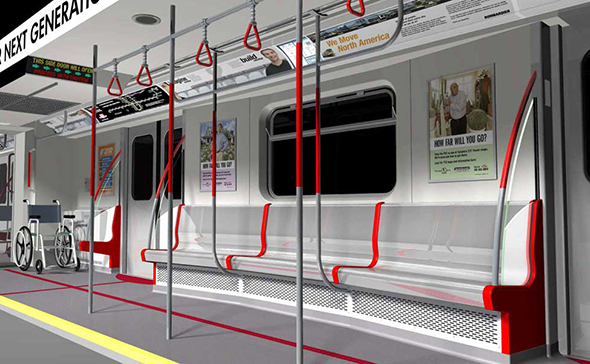 Fortunately then TTC Chair Howard Moscoe hated the design, which he characterized as that of a "cattle car." Even as the UTDC-designed Scarborough RT cars have long featured a perimeter seating layout, when applied to the far longer (and wider) Toronto Rocket cars, the design seemed out of place, almost un-Toronto-like somehow.

The plan was ultimately scrapped, though the Toronto Rockets did get four-seat clusters, which didn't exist on any of the TTC's previous subway trains. Next time you're on the subway imagine what it'd be like with seats only on the perimeter of the train. It just doesn't work as well, does it?

Top photo by Marcus Kamps in the blogTO Flickr pool. Additional image via the TTC.