How do TTC fares stack up against other cities in 2016?

Have you ever paused for just a moment when reaching for that token or Metropass and thought about the cost of public transit in Toronto? You've been to other cities, travelled on their subways or streetcars, and probably noticed some price differences. And you've no doubt grimaced whenever fares increase, thinking it's not right to charge riders even more.

But is that really the case? Where does Toronto sit relative to its peers when it comes to passing through the turnstiles?

It's a tricky subject comparing cities and their transit fares -- see the detailed notes in the appendix -- but one worth studying nonetheless. Cities with bus and rail systems have long shared some commonalities, after all, and many face similar challenges today.

I've tackled this topic before and found TTC prices to be the highest in the US or Canada, by at least some measures, every time. Is that still true today? 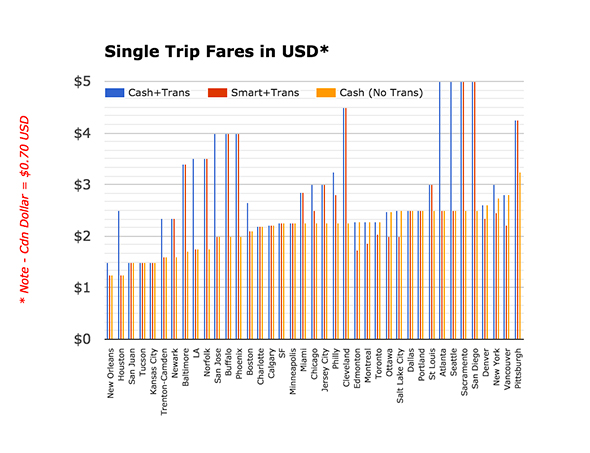 Let's start with an updated look at the Adult Cash Fare (interactive chart). A century ago this was the only way to pay, but these days it's increasingly rare as most systems have shifted frequent riders over to smartcards or multiple trip discounts, which we will call the Multiple Trip/Smartcard fare.

The above chart shows that although its base fare is still on the high side (especially if in Canadian dollars), if a transfer is involved, the well-integrated TTC now appears to be less expensive than a large number of cities. Offering a discount for Presto and token users is a nice and increasingly rare touch. 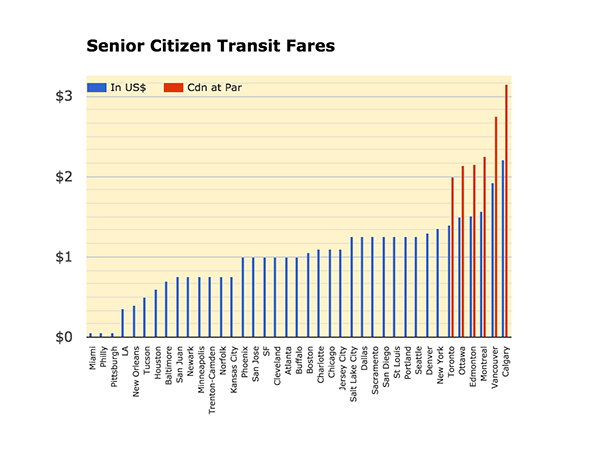 Almost every transit system offers a reduced fare for children and seniors. There are too many complexities to ages, heights and other qualifications to easily compare children's fares, but it should be noted that the TTC's new kids-under-12 ride free policy is unique and by far the most generous on the continent.

The discounted Senior Fare (interactive chart) is a little easier to compare between cities, and here Philadelphia, Pittsburgh and Miami lead in making transit completely free for their senior citizens. Perhaps unexpectedly, Canadian cities are uniformly hostile to seniors, charging them the highest prices to ride.

Toronto can take some solace in being the least expensive Canadian city for seniors, but south of the border most cities hover around $1 or less for elderly transit users. 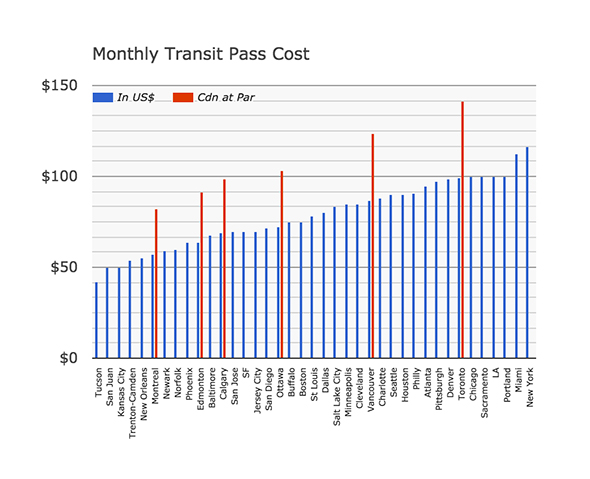 Perhaps the most important form of fare for transit-oriented residents and commuters, and the easiest to compare, is the Monthly Pass (interactive chart). Toronto has for several years now had the most expensive monthly transit pass of any city, and 2016 finds this unchanged -- if one does not convert from Canadian dollars.

If you believe in the Law of One Price and convert the Metropass cost to USD, Toronto still sits in an upper tier with Chicago, Pittsburgh, Denver, Portland, Sacramento. Miami and New York then take over the top spots. 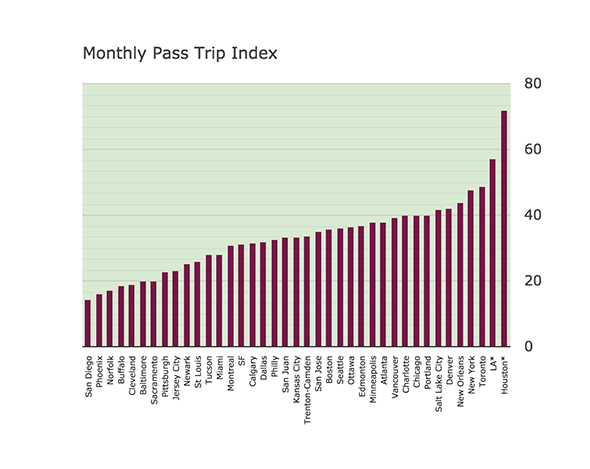 Unfortunately Toronto still punishes its transit riders in this regard, requiring a stunning 49 trips to make a monthly pass pay for itself -- that's twice a day, every workday, plus five trips on weekends, and no holidays or days off. Putatively transit-friendly New York is just behind at a trip index of 48, while most other cities stay at or below the magic 44-trip cutoff.

It's almost as if the TTC doesn't want people in walkable, transit-dense Toronto to get passes. 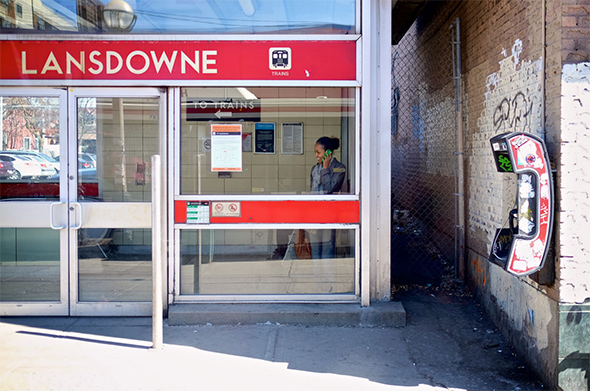 So is Toronto still the most expensive city in North America for transit? The answer in 2016 is, like a Scarborough subway plan, increasingly muddled. It's hard not to argue that the TTC is making some progress overall when it comes to fares. Price increases in other cities have begun to catch up.

The new children's policy was a pleasant surprise from a mayor who, while not perfect, is certainly an improvement on his predecessor. More changes may be coming.

But as of this moment adult and senior fares remain frustratingly high compared to most other cities, and as a matter of policy the continued poor value of the TTC's monthly Metropass is disturbing. One could certainly still argue that Toronto riders are doing more than their part, a belief borne out by the TTC's astronomical farebox recovery ratio.

Toronto's transit fares may not be quite as bad as they first seem but they are clearly no bargain -- something to think about that the next time you pass through the turnstiles.

Comparing transit fares between cities is a complicated task. The attached appendix is designed to clarify the criteria at work and account for the various challenges posed by different fare structures.

Photos by Akib and Jason Cook.