A snapshot of Queen and Bay in the 1960s

During the 10 years between 1960 and 1970, the area around Queen and Bay streets in Toronto underwent a drastic modernization. Neighbourhood cinemas, burlesque theatres, stores, and hole-in-the-wall restaurants on the south side of Queen gave way to the luxurious high-rise Sheraton Centre hotel, a cluster of bank buildings, and the Simpson Tower.

On the other side of Queen, west of Bay, the city's space age City Hall squished a cluster of working class homes and businesses at the south end of The Ward, an important early immigrant neighbourhood notorious for its impoverished conditions.

This is what Queen and Bay looked like in the 1960s. 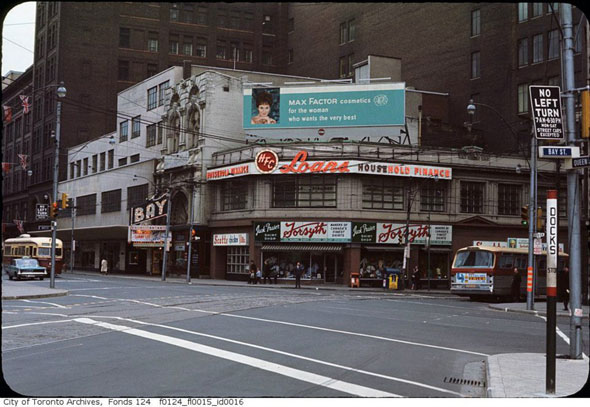 The southeast corner of Queen and Bay in the early 1960s. Before Scott's Chicken Villa (a Canadian precursor to KFC) and the Jack Fraser shirt store (slogan: "No One Ever Regretted Buying Quality,") the corner building was home to a branch of Bowles Lunch. The Bay Theatre, previously known as the Colonial, was among the first moving picture cinemas in Toronto when it opened in 1909. The corner is now home to the Simpson Tower. 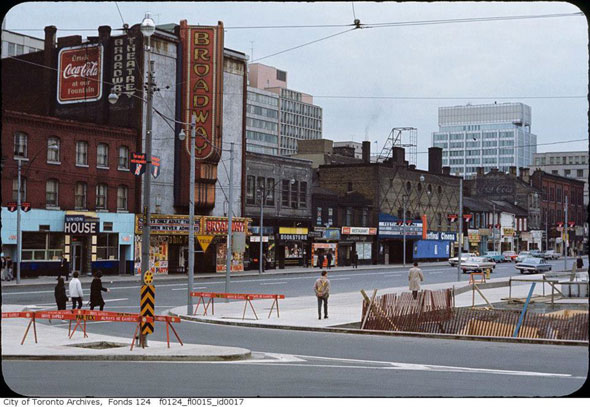 Looking west along the south side of Queen, opposite City Hall. This block was expropriated in the mid-1960s after completion of Nathan Phillips Square. The Sheraton Centre hotel, which was completed in 1972, replaced most of these buildings, including the Union Hotel, Broadway burlesque theatre, and the Festival cinema. 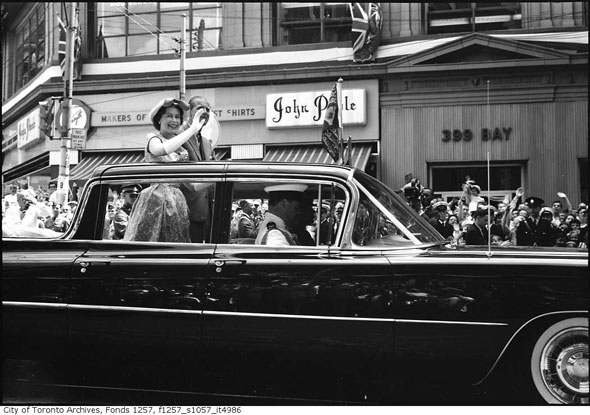 Cheating slightly with a photo from 1959. Prince Philip and Queen Elizabeth, in her first visit to Canada as the reigning monarch, ride south on Bay through the intersection with Queen. The Jack Fraser shirt store building in the photo above is in the background. 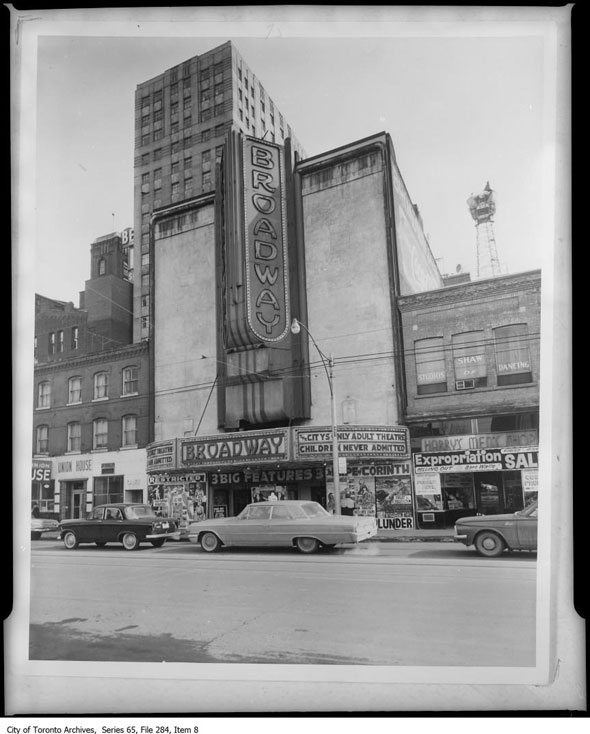 Close-up of the Broadway Theatre in the mid-1960s. Previously named the Globe and the Roxy, the Broadway specialized in vaudeville and b-movies. In March 1935, the manager, Abraham Appleby, was fatally shot inside his office, becoming one of six murder victims in Toronto that year. No-one was charged with the crime. 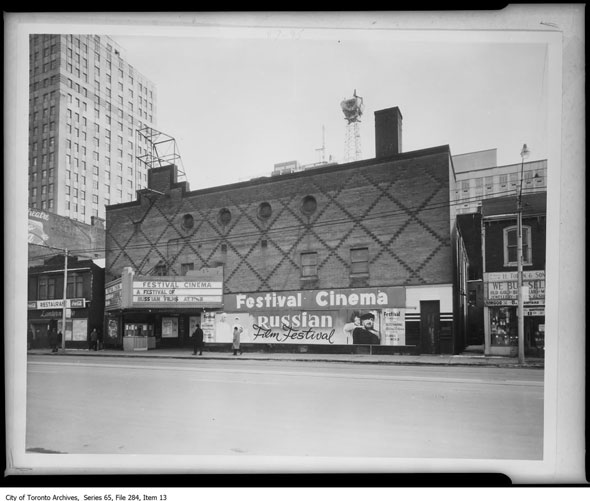 The Festival opened as the Casino in 1936 and, like its neighbours, specialized in a diverse range of raunchy entertainment. Gypsy Rose Lee performed there and, according to historian Doug Taylor, the short movie The Case of Mr. Conrad, which depicted a gallbladder operation, caused 14 men to faint during its brief run on Queen West.

In the 1950s and 60s, Dizzy Gillespie, Mickey Rooney, Eartha Kitt, and other big names performed at the Casino alongside acts like "Claudette the Torrid Temptress and the 7 Lucky Girls." It was briefly renamed the Festival theatre 1961 before closing for good in 1965. 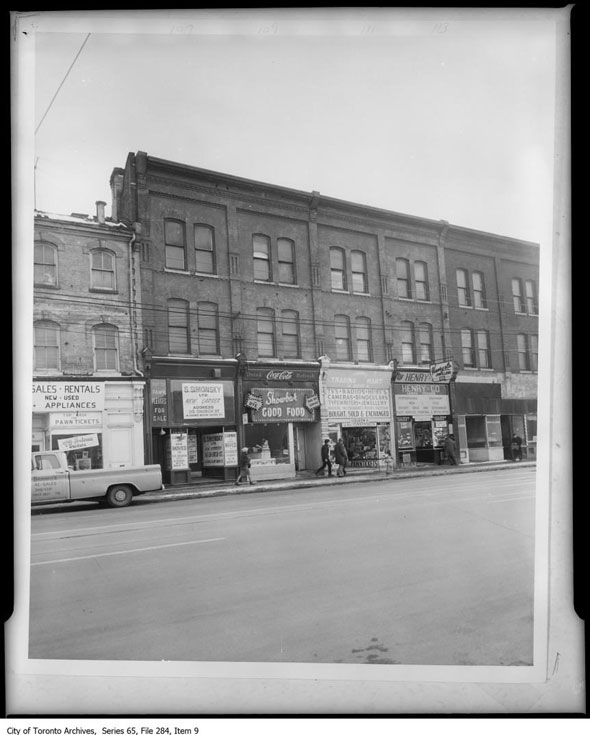 Showbar ("Good Food,") located in the middle of this row of stores on the south side of Queen was owned by Jack Katz, a former trombone player at the Casino theatre who quit after suffering a breakdown. He opened the eatery in 1956, serving basic fare such as cabbage rolls, fish and chips, and salmon steaks to stage performers, Osgoode Hall judges and lawyers, and bureaucrats from City Hall.

The Globe and Mail described the expropriation of the block and its impact on Katz in 1965: "When a man is caught with all he has built in the world plumb in front of the steamroller, impossible to carry away, there is a poignancy. Or even a sadness. Or even a tragedy--one more notch carved in the pistol butt of what is known as the common good." 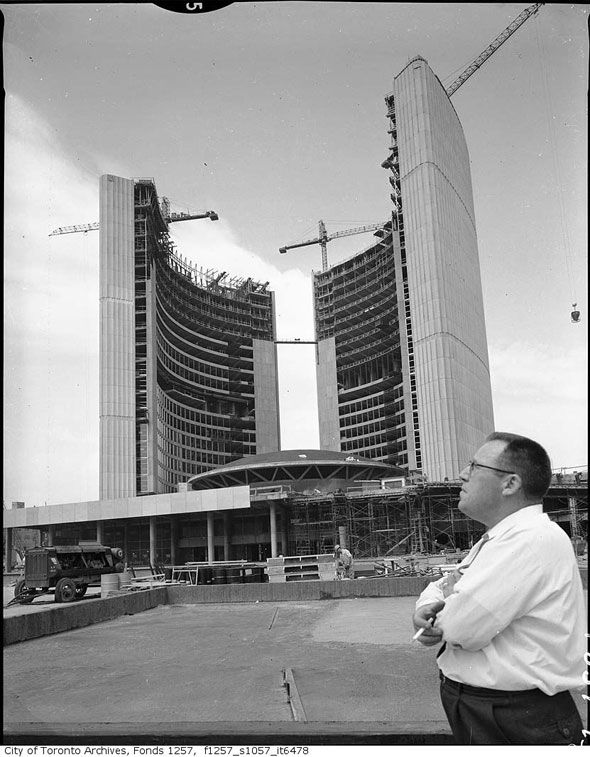 A member of the International Union of Operating Engineers poses outside an unfinished City Hall in 1964. The area now occupied by Nathan Phillips Square and Toronto's municipal offices was previously part of an area known as The Ward, a predominantly low-income, immigrant neighbourhood that was roughly bound by Dundas, University, Yonge, and Queen. Today, little physical evidence of The Ward remains. 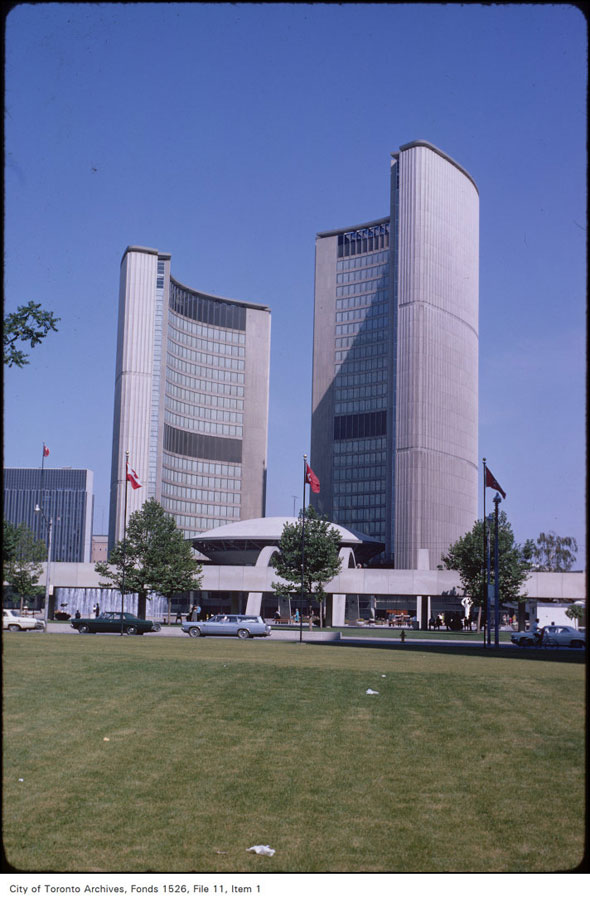 A now impossible view across Queen to City Hall in 1967. The grassy patch on the south side of the street was created by the demolition of the Union Hotel, Broadway and Festival theatres, and Showbar. The addition of The Thomson Building in 1972 resulted in the current streetscape west of Bay.