The secret life of bats in Toronto

They're hibernating right now, but thousands of bats are literally hanging out in caves and dark spaces across Toronto. Though the tiny winged mammals are far from this city's most common critters, there's plenty of them out there if you know where to look.

The two most common types are the little and big brown bat, both of which are found across much of North America, but most often it's the little brown bat that's seen in Toronto, says David Sugarman from the Ontario Science Centre.

"In Ontario there are about eight species of bat," he says. "The reason we haven't seen too many of them lately is because of this fungal infection called white nose syndrome ... we started seeing it around 2010 here, it has actually spread from the southeastern U.S., like Georgia, and there have been cases north of Lake Superior. It's devastated millions of bats."

White nose syndrome can suffocate infected bats and cause them to become confused and disorientated. Sick bats may be seen flying during the day or erratically. There is no known treatment, and most eventually die.

Healthy Toronto bats come out at night to feed on insects like mosquitos and moths. Rather than rely on their relatively poor eyesight in the dark, little and big brown bats use something called echolocation to find their way. By bouncing high frequency sound waves off nearby objects, bats are able to build up a detailed mental image of their surroundings that rivals well-sighted animals for clarity.

"The high pitched sounds can go up to 200,000 cycles per second. Someone with really could hearing could hear up to 20,000 cycles per second," Sugarman says. The higher the pitch and the greater the frequency, the more detailed the bat's "vision" becomes. "They can see, but the echolocation, especially in dim light or no light, works perfectly well."

Sugarman says bats can easily track the rapid, unpredictable movements of insects and safely avoid obstacles as subtle as ultra-thin wire. One thing they certainly don't do is get caught in human hair--they're just too good at navigating to make such a basic mistake. The chances of contracting rabies from a bat--another commonly cited reason for fearing the winged nocturnal creatures--is also remarkably slim. 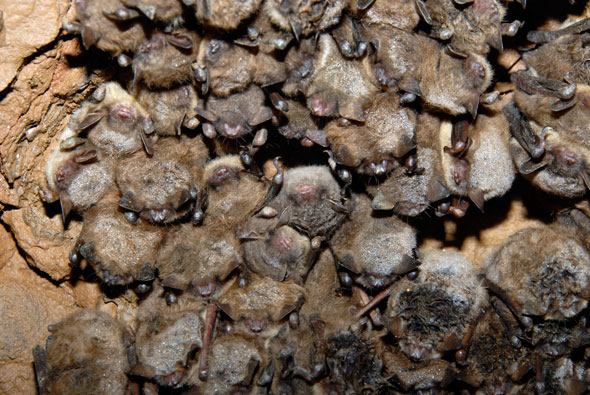 If anything, humans should welcome the presence of bats. A single healthy little brown bat is capable of consuming hundreds of mosquitos in a single night. A healthy colony of several hundred can help keep local insect numbers at manageable levels.

Apart from their remarkable echolocation abilities, bats are also notable for their unique reproductive cycle. A female bat stores sperm from the Fall mating season and uses it to impregnate herself in the Spring, after hibernation. The timing of the pregnancy is entirely at the female bat's control. If it's an early spring, the pregnancy may be initiated sooner. If cold weather lingers longer than normal, the female may delay having her offspring.

Under ideal conditions, the little brown bat can live a remarkably long time--up to 30 years in some cases. Big brown bats (which actually aren't that large, only about 13 cms compared to their 7.5-cm cousins) don't have the same longevity, most typically die after about seven to nine years in the wild.

Right now, Toronto's bats are all in a deep hibernation, likely covered in a thin layer of frost and hanging upside down in a dark, quiet place. Come late Spring, the best place to see them is in High Park or other areas of greenery near the water, Sugarman says.

"With any luck, if you go out on a nice warm summer evening you'll see them flying around," he says. "Their flight is so mysterious. Just the way they flutter around, I've always found it quite nifty ... I always look forward to seeing them."