What kind of apartment does $650 get you in Toronto?

Last week I showed you what $1,000/month rents you in six Toronto neighbourhoods. Unsurprisingly, a grand doesn't go so far in a competitive rental market like Toronto where rents are sky high and apartments are small. Finding an apartment in this city can be a major challenge, one that sucks the very life out of you.

Let's delve even deeper into the rental bones of our city to see what type of hidden gems are available. Is it possible to find a place that's decent for less than $700? Basement apartments, bachelors, studios, shared toilets -- how far will your dollar stretch? Today's price: $650/month. 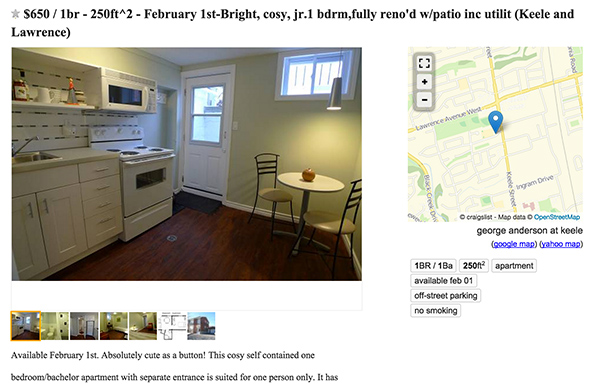 According to the ad, it's a very tiny but renovated basement apartment with a lot of natural light and private entrance. It's a bachelor but feels much larger at only 250 square feet. There's a Walmart around the corner (if you like Walmart, that is) and more transit coming to the area with a new LRT stop at Eglinton and Keele.

$630 at Dufferin and College 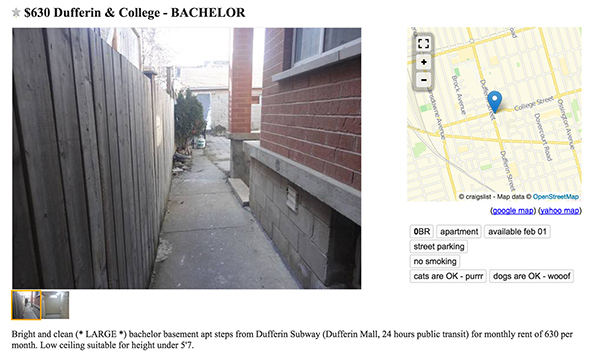 Single Short Female wanted for a bachelor apartment near Dufferin Mall. The space has very low ceilings but claims to be large and bright. For nearby groceries, there's a No Frills inside the mall and an outdoor ice rink at Dufferin Grove Park. 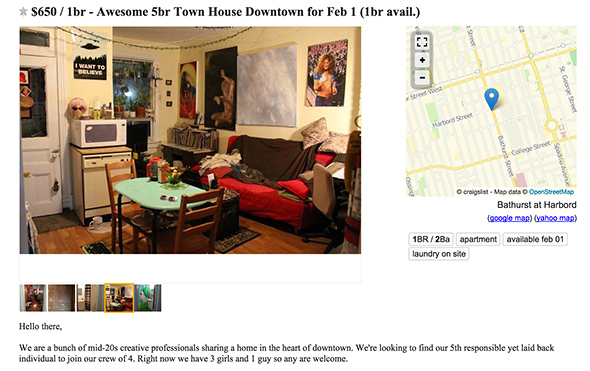 This party townhouse in the Annex is seeking a fifth roommate (six, if you include the cat). The place might be messy but your retro roomies are willing to share their extensive VHS and Nintendo collection. Score. The neighbourhood is filled with other young professionals and money-strapped students with the University of Toronto nearby. Most restaurants along Bloor offer cheap eats and discounts for students. Check out the longtime Future's Bakery at Bloor and Brunswick and El Furniture Warehouse, where everything on the menu is only $5.00. 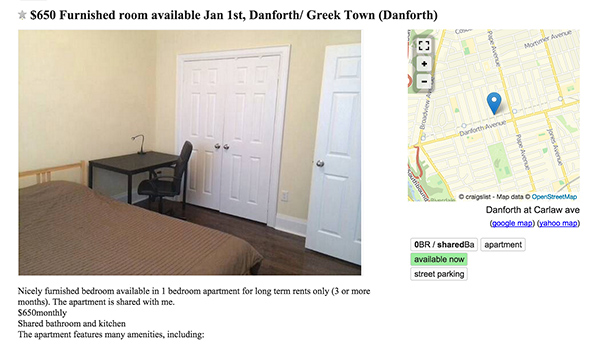 In the city's east end, $650 rents you a furnished room with shared accommodations. A seemingly clean space if the idea of sharing a toilet doesn't repulse you. There's a lot to do in the area with good restaurants (beyond Greek food) and entertainment. Check out 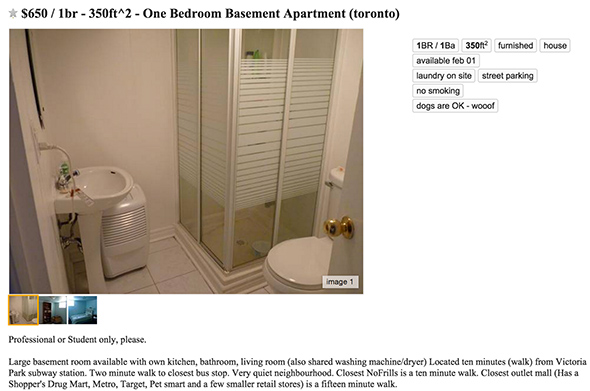 Allen's and Dora Keogh for Irish pub grub, the Big Carrot for vegetarian and organic meals, and the Danforth Music Hall for live concerts. Here are more restaurants in Greektown.

$650 at Victoria Park Near Vic Park, $650 rents you a one bedroom basement apartment. It's 350 square feet with a shared washer/dryer. It's not the most desirable area but the apartment is close to transit, shops and a bankrupt Target that could turn into a GoodLife Fitness. 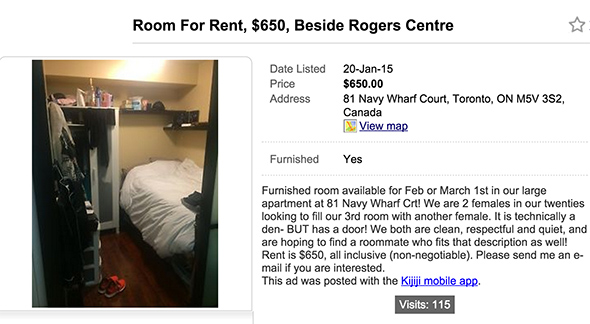 These two roommates are seeking a third, attempting to maximize the space by turning the den into another bedroom (the den has a door or possibly a shower curtain). At least the condo amenities are included in the fee--there's an indoor swimming pool, home theatre and fitness studio.

Are any of these places worth the rent?