Mayor John Tory is hoping Toronto city council will pass an operating budget that includes a 2.25 percent property tax increase, an amount that works out to $83.19 for the average household. A carry-over from the Ford-era means an additional 0.5 percent will be added to the overall tax rate to pay for the Scarborough subway, bringing the total to 2.75 percent--a shade above the rate of inflation.

The spending document, which still needs to be reviewed by the public and pored over by the budget committee and city council, includes money for 181 new shelter beds, $443 million for repairs to the Gardiner Expressway, and funds for two new libraries and community centres. 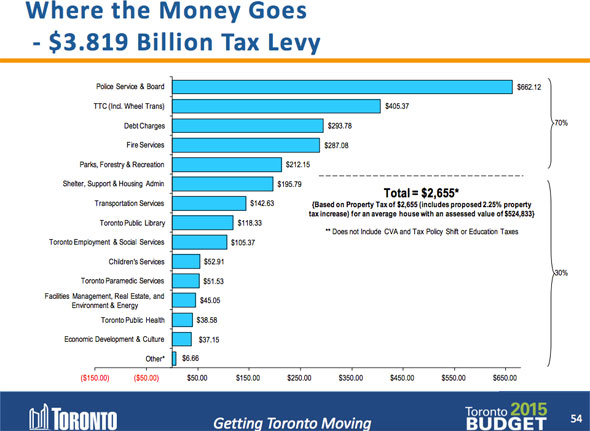 The operating budget covers spending on day-to-day activities throughout the year (the capital budget, on the other hand, is what the city uses to build things like subways and roads.) The salaries for city staff, the cost of running buses, streetcars, and subway trains, and providing public services all come from the operating budget.

In total, the city plans to spend $11.5 billion running the city this year. $3.8 billion will come from property taxes. The average Toronto household (which is worth $524,833) will pay $2,655 in 2015. The rest of the money used to fund the operating budget is sourced from user fees, grants, subsidies, revenues, and transfers. 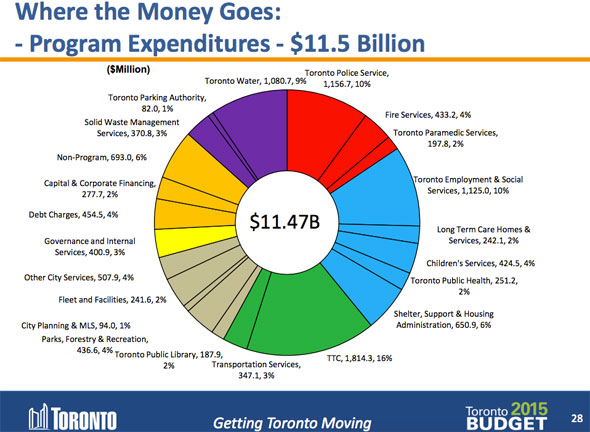 Toronto continues to have the lowest property taxes in the GTA. Factoring in taxes as a percentage of household income, Toronto still ranks below the local average of 3.8 percent.

The budget is due to undergo a final vote at city council on March 10.