Rob Ford is going to take a break from the election campaign and city hall to "go get help" after the Globe and Mail revealed it had seen new video of the mayor appearing to smoke crack cocaine that was recorded as recently as Saturday.

In the video, which the paper says is being shopped by a dealer for six figures, Ford is seen "taking a drag from a long copper-coloured pipe, exhaling a cloud of smoke, his right arm convulsing." Reporters Robyn Doolittle and Greg Mcarthur say the video was taken in the early hours of the morning in his sister's basement. Another video features Sandro Lisi, the mayor's former driver and an accused extortionist.

Gawker posted a screen shot from one of the videos that shows Ford holding what appears to be a hash pipe. 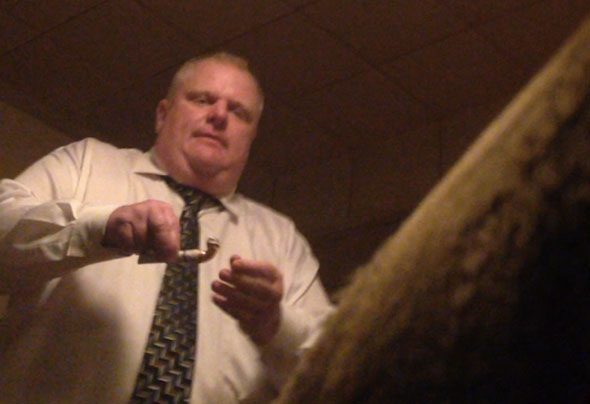 The news that Ford will take a break but remain on the ballot comes as the Toronto Sun said it had acquired an audio recording in which Ford says he wants to "fucking jam" fellow candidate Karen Stintz and demands to be served shots of liquor at Sullie Gorman's, a bar close to the park named in honour of his father.

"Ford was seen buying shooters and trying to fight with patrons in the Royal York Rd. bar Monday," it says. Columnist Joe Warmington, who Ford often turns to in times of crisis, said the mayor told him he's "ready to take a break" and "go get help."

"It's not easy to be vulnerable and this is one of the most difficult times in my life," Ford said in a statement. "I have a problem with alcohol, and the choices I have made while under the influence. I have struggled with this for some time."

"I have decided to take a leave from campaigning and from my duties as mayor to seek immediate help ... I know that I need professional help and I am now 100% committed to getting myself right."

A spokesman from Karen Stintz's campaign said the comments were "deeply offensive to everyone living in Toronto" and "shocking and bigoted." John Tory said Ford should resign "for the good of the city."

Things haven't gone smoothly for the mayor since he announced he would be seeking re-election. On April 3, police documents alleged Lisi threatened to put "heat" on the Dixon Road community in the immediate aftermath of the first crack cocaine video scandal.

Ford told the Sun that he was "appalled" at what he had said, though he disputed using the word "jam."