A large portion of Toronto's west end was in darkness this evening following a sudden and massive power outage. The lights went off around 9:15 and stayed off for close to two hours in parts of the city.

Toronto Hydro said the blackout was caused by a Hydro One transmission issue. While the city was dark, the outage map on the electricity provider's website was down due to a surge in demand. At its greatest extent, the problem affected most of the west end south of the 401, parts of downtown west of Yonge, and the Port Lands. A small pocket in the Beach also appeared to get hit. 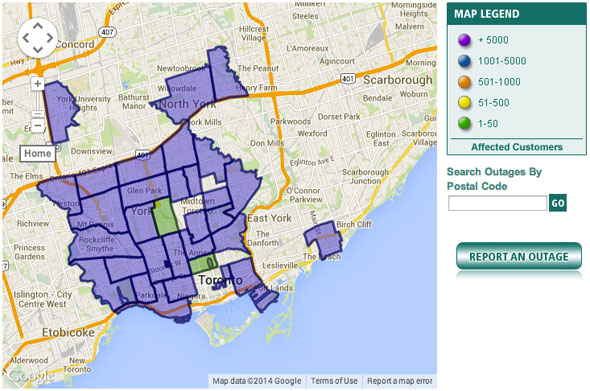 The TTC experienced signal problems on Line 2 (Bloor-Danforth) between St. George and Jane and several stations were running on emergency power. Spokesman Brad Ross said the failure knocked out some communication systems, leading to a delay deploying shuttle buses. The vehicles are still on the road while service below ground catches up. Streetcar service was unaffected.

Mayor Rob Ford told listeners of Joe Warmington's Newstalk 1010 show that power should be restored to the remaining customers before midnight, and he appears to have been correct.

Hydro One hasn't confirmed what triggered the blackout. "The cause of the outage is currently under investigation. There were no injuries or health and safety issues reported due to the incident," the company said in a press release.

Toronto Hydro said power was restored as of 10:52.

Where were you during the Great Blackout of 2014 (as this will undoubtedly be remembered)?