The history of the iconic Sunnyside swimming pool in Toronto

Nearly 97 years ago, in July 1925, the largest swimming pool in Canada - and reportedly the world - opened in Toronto at Sunnyside Amusement Park, just southwest of the King, Queen, Roncesvalles intersection.

It's still there, though the heart and soul that made it a destination for millions of bathers is long gone.

The "Tank" was one of the park's first attractions. In a city with few outdoor bathing spots that weren't a frigid, heavily-trafficked lake, the heated, filtered, and chlorinated pool was a real luxury, especially when summers were mild.

Today, the pool is one of the last relics of "Toronto's Lake Shore Playground," lingering on behind thundering traffic and a busy rail corridor. 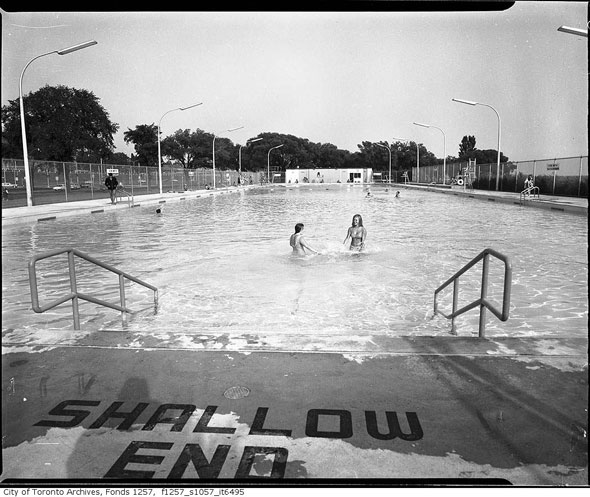 Sunnyside Pool in the 1960s

Sunnyside was one of the city's most popular summertime attractions in 1925.

Opened two years earlier on the eastern edge on the Humber Bay beside a major streetcar intersection, the park followed in the footsteps of attractions at Hanlan's Point and Scarborough Beach where families and young children could kick back in their spare time.

The city had been busily extending its shoreline out in to the lake since 1913, when a massive, $19 million ($396 million today) beautification and redevelopment plan was approved by council. 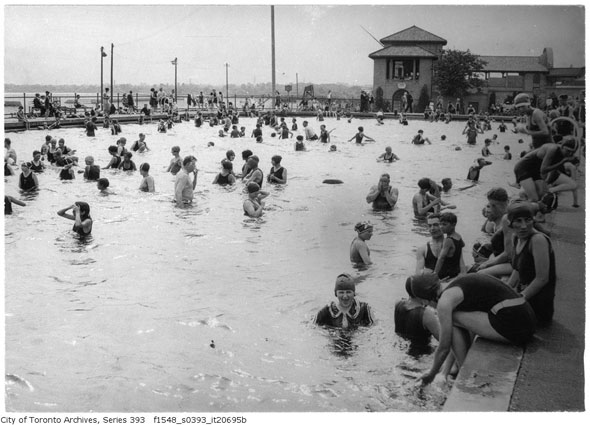 The side of the Pavilion from the pool.

In 1922, 9 years later, on sand dredged from the bottom of the bay mixed with Pickering farm topsoil, the Pavilion and Amusement Park opened for business.

The Toronto Harbour Commission, the owner of the newly-created land, issued permits to a slew of attractions, among them an Aero Swing, a merry-go-round, bumper cars, a whip (sort of like a waltzer on an oval track,) and various concession stands and games of skill.

As Mike Filey notes in his comprehensive history of the park, I Remember Sunnyside, it was "Toronto's newest place to be and be seen."

A wooden rollercoaster named the "Sunnyside Flyer," designed by legendary ride designer A. J. Miller, a man responsible for many of the rides at Hanlan's Point and several of the best thrill rides in the world, featured the "dippiest dips on the continent."

When it was tweaked in the '30s, it could reach up to 90 kmh - not far off highway speeds on the DVP. 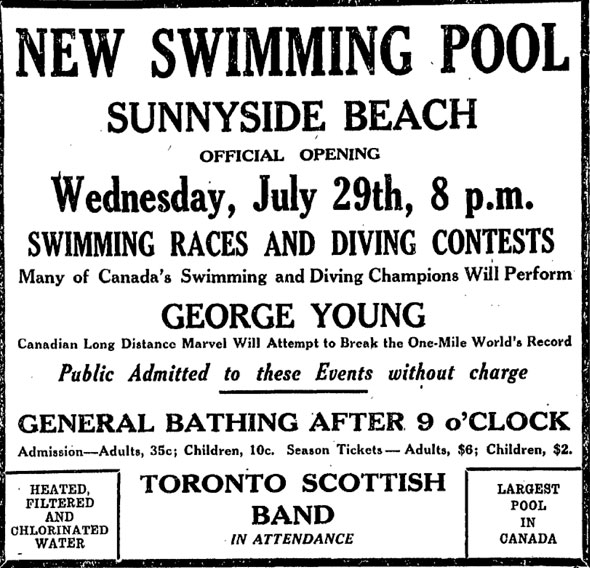 How Sunnyside Pool was promoted when it first opened.

The $300,000 Bathing Pavilion was also among Sunnyside's first buildings. Built as a changing area for people about to plunge in to Lake Ontario, the concrete structure had separate wings for men and women, a space for lockers, towel rental, and a rooftop terrace.

The design was based on a similar structure in Lynn Beach, Massachusetts, that a Harbour Commission manager had seen on a tour of American resorts. Its architect, Alfred Chapman, also designed Havergal College on Avenue Road and the Princes' Gate at the CNE.

Trouble was, despite Sunnyside appearing on a popular swimming location, two consecutive cold summers had forced thousands of bathers to scurry tip-toed out of the frigid water and back into their clothes. 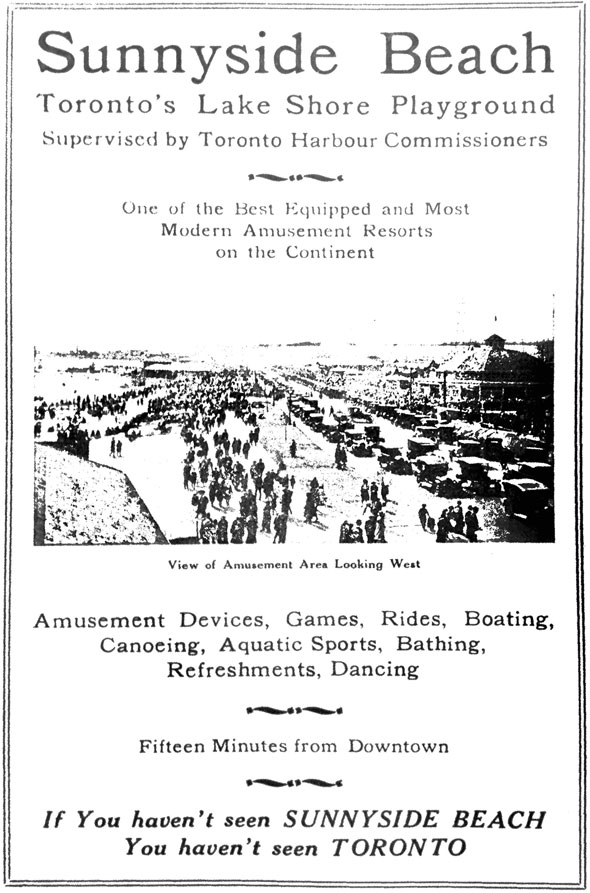 How Sunnyside Beach was once promoted.

A giant above-ground pool was built in just over two months next to the Bathing Pavilion at a cost of $75,000. Its official name was the Sunnyside Outdoor Natatorium, but everyone called it the "Tank."

The dimensions were remarkable: it was 91 metres long, 23 metres wide, and big enough for 2,000 bathers. The people were excited - 28,000 people turned up for the grand opening, according to the Toronto Star, and special police had to keep 25,000 outside. 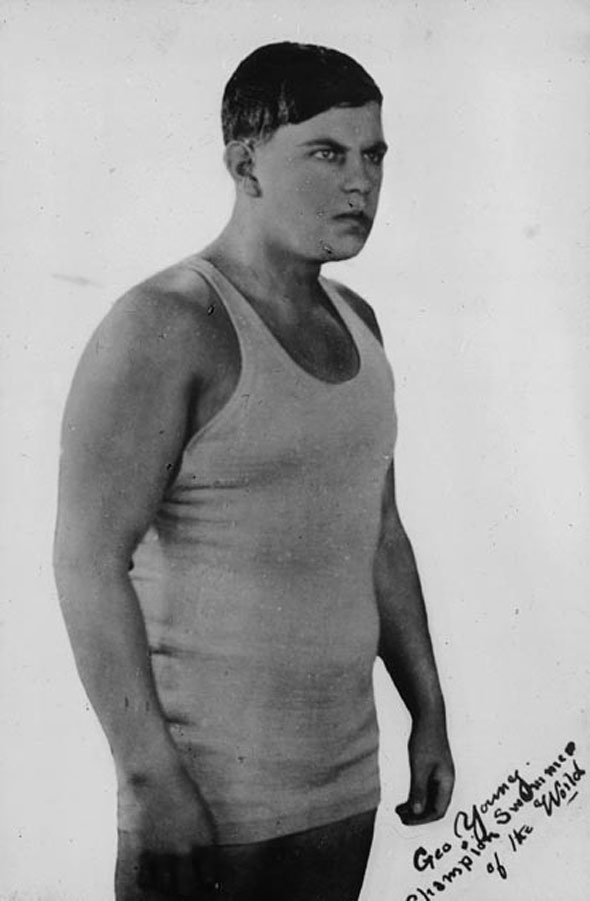 T. L. Church, the MP for Broadview-Toronto, officially declared the Tank open on 29 July, 1925, in front of George Young, a Canadian marathon swimmer who would later become the first person to complete the 35 km crossing between Catalina Island and the California mainland.

The feat earned him the nickname "The Catalina Kid" and a spot in the Canadian sports hall of fame.

The 17-year-old Young, trained in the Central YMCA, was there to attempt the one-mile world record in the heated, filtered, and chlorinated 3 million litre pool. As the Toronto Star reported, he was "hampered at every turn."

"To begin with the water was too cold. He had to sit around for a full hour before his performance. It is claimed he lost easily 22 seconds on the corners and it was a twilight swim." In the end, Young crossed the line in 23 minutes and 30 seconds, almost 10 seconds shy of the record. 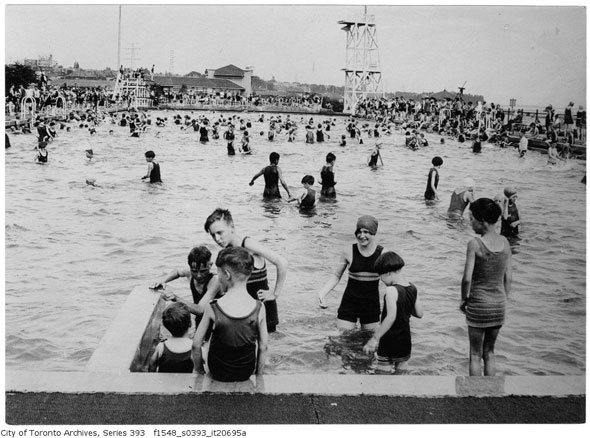 Despite the disappointment, thousands stuck around to pay the 35-cents admission and cram into the water despite the temperature being identical to the lake a few metres away. It would later rise from 19 C to 25 C.

In Filey's "I Remember Sunnyside," Sam "The Record Man" Sniderman recalled the Tank was an opportunity to "parade like peacocks showing off our suntanned muscles." 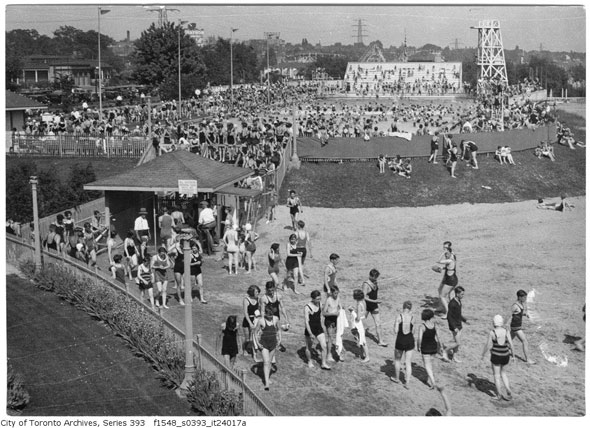 In its original configuration the pool had a set of bleachers at the east end for spectators and a series of benches around the outside. A large two-level diving board stood at on the southern edge of the deep end for use in competitions.

Swimming was so popular at Sunnyside that a dedicated streetcar service brought kids from all corners of the city to enjoy the refreshing water. 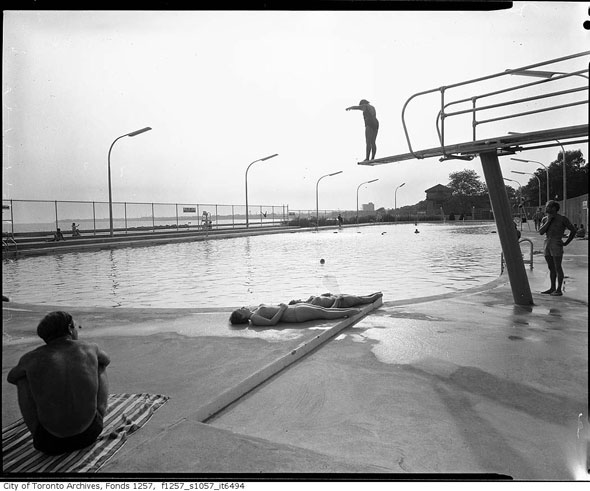 The free shuttle would pick up kids carrying a bathing suit and towel from as far east as Danforth and Coxwell and run them back again later. The roll-sign would show "Private" or "Bathing Car" instead of a route number.

The death of the popular amusement park that once straddled Lake Shore Boulevard started in the late 1940s with the approval of the Gardiner Expressway. 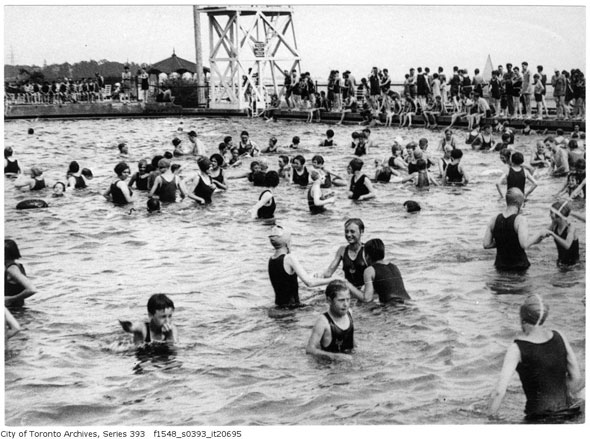 The number of annual visitors had been in decline, a fact Filey attributes to people's ability to drive to more remote destinations.

The park's carousel was sold to Disneyland in Anaheim, California where it was extensively refurbished and expanded in to the King Arthur Carrousel, one of the park's main attractions on its opening day 65 years ago this month.

The same year, the third in a series of suspicious fires destroyed the Sunnyside Flyer rollercoaster, reducing it and the hope for a revival of the lake shore amusements to ashes.

By 1956 ,the majority of Toronto's popular lakeside destination was gone. Just the Tank, Bathing Pavilion, and Palais Royale Dance Hall, all fortuitous in their location close to the water, managed to stick around. 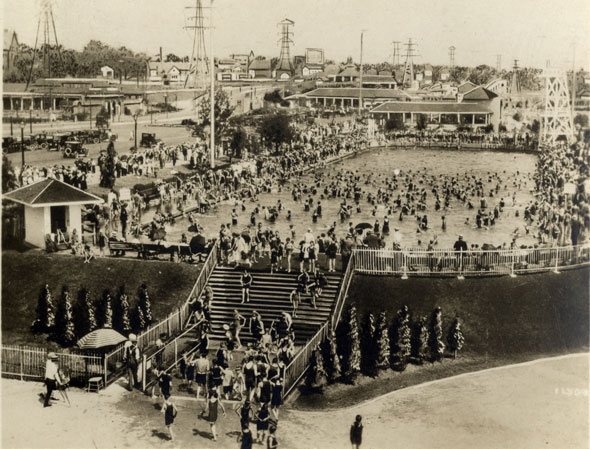 The Natatorium minus its original bleachers.

The Natatorium was renamed the Gus Ryder Pool in 1980 and remains open for business. The bleachers, wooden diving board, and other features from the 1920s are all long gone but why not stop by for a dunk in the tank this summer and get a taste of history.