What does the future hold for Kensington Market?

It is the ultimate tribute to a neighbourhood that anyone who spends time within it will walk away feeling as if they have an investment in it. Everyone cares about Kensington Market. I do. Who wouldn't have an abiding respect for a place that somehow manages, despite its prime downtown location, to keep its cool even if it doesn't change as fast some would like (or too quickly for others). Its appeal, you could say, is that its identity is suitably complex such that no single group can lay claim to it.

It's no secret that, given Toronto's changing demographics and inflating property values, intense pressure has been put on those who make this their home. Many non-residents are concerned about what happens to the Market, which is great, but often their only tangible investment is intermittent patronage and their own romance; they buy some groceries once a month then they leave, perhaps with a coffee in their hand on the way out.

When people who don't live here talk about the Market it can be like hearing Americans talking about Canada; you wait in preparation for the inevitable Mounties/moose/hockey reference. The Market's so funky. I hope it keeps its magic! A change.org petition being circulated on Facebook pictures a stone-faced woman holding a hand-scrawled sign on Augusta Avenue with Zimmerman's Discount prominently featured behind her. I would love to survey those who signed the petition to see whether any have actually been to Zimmerman's Discount let alone bought anything from there. 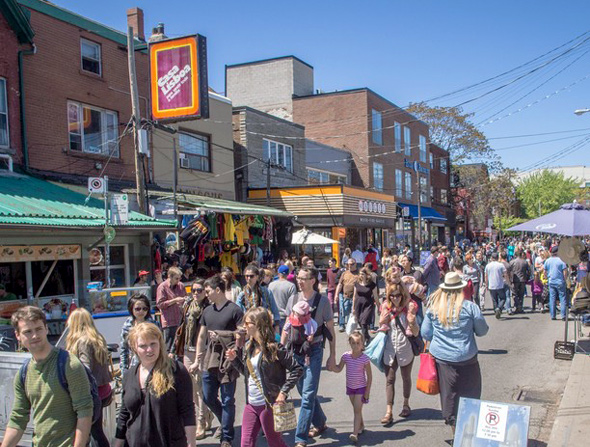 The Market is complex. And it's changing. And it has to.

Shortly after moving here from Ossington with my partner, I bumped into an acquaintance — a bartender who'd lived in Kensington for several years already. He told me in no uncertain terms that people who move here become disenchanted, typically go crazy within two years, and then run away screaming. Why, I wondered. It's the Market. I told myself this as if its truth were self-evident. It's the sort of rookie mistake anyone who has only known Kensington as a visitor would make.

And the longer I treaded the sidewalks, the closer I came to some answers. One of the chief presumptions I'd had was that the Market was a community which embraced its residents. Short of seeing the ghost of Al Waxman walking down Augusta, I figured there was some sort of modest local currency which came with living here. Dead wrong. The Market, for all its strengths, can be strangely impersonal, even stand-offish. There are no insiders. Only groups of outsiders.

The recent concern over a proposed Loblaws opening at College and Spadina makes many of these fault lines visible. No matter that it won't actually be in the Market. No matter that its customers will probably be the same crowd who loyally shop at other Loblaws and Metro stores. No matter that no one can speculate what the realistic run-off from the Market would actually be (or influx considering, technically, there would be more people visiting the area).

Nonetheless, activists both local and otherwise raise the spectre of Starbucks. You don't want another Starbucks, do you? they say, wide-eyed, in reference to a rightfully and successfully fought proposal several years back. But, in a reversal of roles, I'm reminded of the club owners on Ossington who spun scary stories for journalists of gun-toting Vietnamese drug gangs whenever someone questioned unobstructed development on the strip between Dundas and Queen West. Today that same stretch is chock-a-block with bars and there's still nowhere to buy a newspaper. Or groceries. And if the battle of yesterday's Kensington Starbucks War was won by the good guys, that battleground now sits occupied by an anonymous burger joint aimed at tourists. 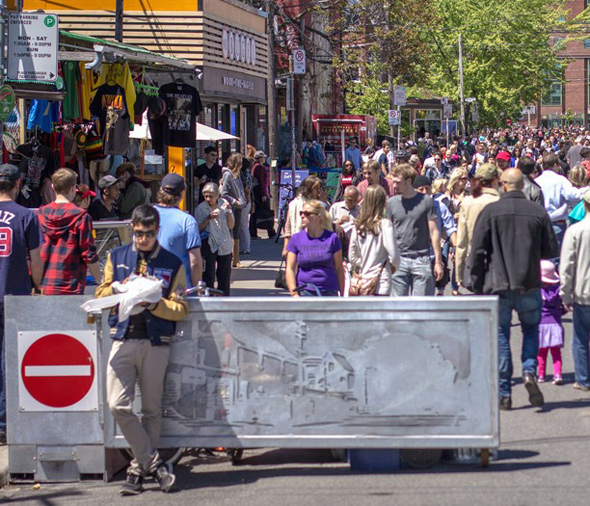 The debate has become more complex with RioCan's newly proposed Wal-Mart at the site of the former Kromer Radio at Bathurst and Nassau. Like Loblaws, it's not in the Market, but unlike Loblaws it is not, generally speaking, a good (which is to say fair) dealer of goods. Wal-Mart represents retail's race to the bottom, where no employee save a tiny few make a living wage — a free market incinerator which leverages control from those companies it does business with in order to provide the magic trick of low, low prices. It worries me that both Loblaws and Wal-Mart will become intermixed in the talking points of the SAVE KENSINGTON brigade since the former really hasn't done anything but, well, be big.

So, what does Kensington actually want? Like in all Toronto politics, even if it results in mediocrity the Market seems to be motivated by what it doesn't want. So, along with Starbucks, the neighbourhood veto was also applied last year to a proposed farmer's market — the kind enjoyed in less neurotic regions of the city, like Trinity Bellwoods and Dufferin Park. The NIMBYism took on absurd proportions when European Meats closed its doors around the same time and the owner blamed his decision on that 80s bad-guy: yuppies. It came across like a sad fuck-you but also a dissonant reflection of a generational shift, where older family-run shops have to fight harder for relevance, especially given the ransom storefront leases have become.

Despite the bartender's omen, I eventually found my footing, even if I'm not high-fiving people on my way to get an Americano in the morning (this is Toronto after all). New ventures such as Hooked the renovated Kid Icarus, the commercial renewal of Augusta's abandoned south-end at Dundas have helped me see that the Market, in its sentient if opaque wisdom, can respond to the needs of residents and visitors without necessarily pitting one against the other.

And yet, everyone who lives and works here will always feel a heightened sense of vigilance, even if that ends up being a mirage. For me it's not allowing it to turn into a mindless arcade of baubles and burgers. The spectacle of Pedestrian Sundays aside, Kensington is not a wind-up toy to be measured for the quality of its user-experience. As someone choosing to stay (even if I am honestly tempted from time to time to run away screaming) I should hope we err on the clear-eyed side of what's ahead of us. After all, to paraphrase John Ralston Saul, only dead things need preservation.