Last week we lost towering legend of intellect, advertising genius and all around Toronto hero, Gary Prouk. While you may not instantly recognize his name, you've no doubt been directly or indirectly influenced by his advertising campaigns, visually seduced by his many television commercials, bus shelter ads, billboards and transit signage. A real life Hogtown "Mad Man", a live wire who fictional characters like Don Draper reach to emulate, Prouk's crowning legacy was devising the long running hook for Caramilk's successful advertising strategy- stoking the mystery of how they get that soft flowing caramel into the Caramilk bar.

The question was first raised not long after Caramilk debuted in Canada in 1968, and fresh faced 26 year-old Prouk was already creative director at the Toronto office of American firm Doyle Dane Bernbach. The new 10 cent chocolate bar from Cadbury needed something to brand it unique, to stand out from the wide variety of popular chocolates offered by sweet toothed giants Nestle, Hershey and Effem Foods. Prouk reckoned on playing up the mystery angle, prophetically pre-empting the 1970s zeitgeist of Watergate, Bigfoot, UFOs and conspiracies. He also coined the solid gold subtitle - "One of life's sweet mysteries".

Prouk was most proud of his infamous Mona Lisa Caramilk spot, winner of a Lion at Cannes, and recipient of a coveted spot in the Clio Hall of Fame, where it remains to date the only Canadian advertisement in the fiercely competitive ad world to do so.

The Caramilk mystery meme continued, running through the 1970s, '80s, '90s and even 2000s. Everyone has a favourite variant - the business men bidding against one another to gain the secret from the Devil ("Anthingggg?"), the arrogant bragging aliens, the WarGames influenced kid hacker. Prouk's good friend David Cronenberg even directed a few spots, including the James Bond-ian "Surveillance".

In 1979, Prouk helped launch another Cadbury chocolate bar, Dairy Milk, with a series of puns based on the word thick and realized in Terry Gilliam-style animation in both broadcast and print.

The 1980s were a tremendously successful time for Prouk. He helped re-launch Apple computers into Canada and rebranded Mercedes Benz for an encore. His commercial for Nabob coffee with a mallet wielding Michael J. Reynolds kick-started the trend of comparative advertising, and is still taught as textbook ad man acumen everywhere from the London School of Economics to Harvard. 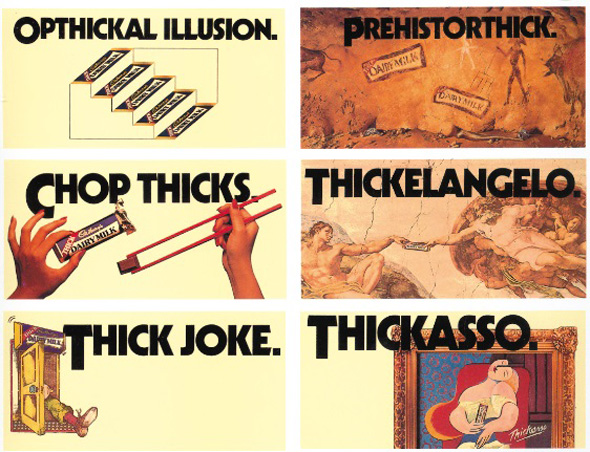 In 1985, his firm Scali McCabe Sloves romanced the lucrative Labatt account away from incumbent J. Walter Thompson who had held it since 1968, and promptly rocked the entire Canadian advertising industry. He went on to re-tool the Labatt Blue brand with the "Call for the Blue" campaign, a patriotic, inclusive coast-to-coast Canadiana bent which defines beer marketing to this day.

It's impossible to imagine eating a Caramilk bar without thinking about its mysterious secret thanks to Gary Prouk, and with his untimely passing the secret of that secret may never be known. But as the old Cadbury transit ad used to ask, "Ever notice how famous you become when you're wrapped in mystery"?