Origami Lofts is a condo development inspired — I think — by little paper cranes. Or, to borrow directly from marketing-speak, it is a "beautiful series of angular folds and sleek cutouts that hide and reveal, soothe and provoke." I'm not entirely sure how a building serves to "soothe and provoke," but I think I'll leave that statement unexamined. A Symmetry project at Bathurst and Queen, Origami will be modest in height, ostentatious with angles, and is already being snatched up by buyers. Maybe low-rise is the way to go? Here's a closer look at Origami. 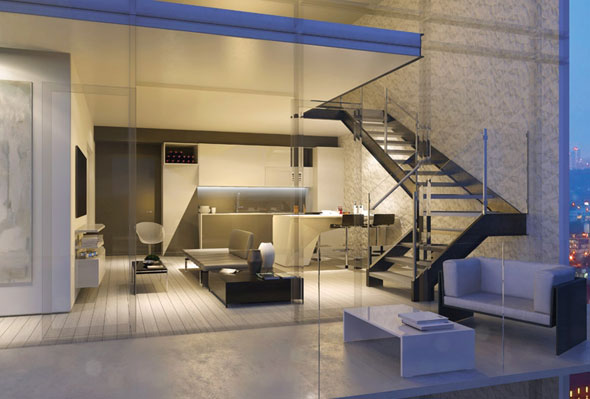 Let the sardines live in their 34th floor, seventh unit, 500-square foot income-drains. With just 23 units, Origami offers a bit of exclusivity in a market saturated with homogenous, cookie-cutter condos. Yeah, I'm taking about you guys. While there are some drawbacks to living in a smaller building (few amenities, most notably), I'd say the benefits far outweigh the limitations. There's less wear and tear on common spaces and elements, for one, plus greater familiarity with neighbours, better cohesion when something goes wrong, and (generally speaking) less noise. Personally, I'm glad to see that Bathurst and Queen will not be taken over by some giant mega-structure (like some other forlorn intersections we all know) and that developers here have opted for a little architectural ingenuity. Origami looks like it will complement the area without overpowering it.

And speaking of the area, the stretch of Bathurst north of Queen has the good fortune of being just at the cusp of some serious upgrades. Or at the very least, it certainly looks that way. For now, there are a still a few vacant and boarded-up retail spaces nearby, but the west side does have a relatively new Starbucks in its corner (sorry Starbucks-haters, but that's a good thing if you're investing in real estate) and a couple new shops that might add to its edge. For now, would-be Origami residents can get in somewhere around $600-$650 per square foot range, which isn't an outstanding deal, but not a half-bad price either. In fact, it's probably right where it should be for a condo by two streetcar lines and near endless cafes, shops, and restaurants, but with an immediate vicinity that could use a touch of work. 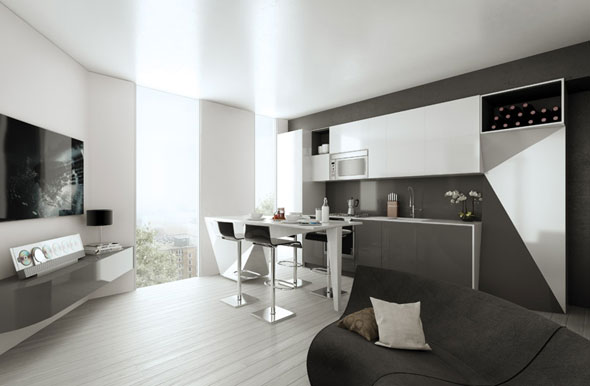 In an ideal condo-living world, you'd be able to have a concierge/front door security and as few as 23 units in your building. Unfortunately, this is real life (someone should tell Donald Trump) and a person at the door is far too expensive for a building with so few suites. So I understand why Origami is without concierge, but it doesn't change the fact that Queen and Bathurst can sometimes get quite... animated. And before I'm accosted with accusations of "spoiled little suburban girl" (which is untrue — I'm not little), let me just say that I realize that there are plenty of other residences in the area without anyone guarding the entrance. And that's fine, both for living and renting. But when it's time to appraise the value of a condo unit for purchase, security issues — either real or perceived — can certainly affect your overall bottom line. Especially when it comes time for resale; something to keep in mind as an inevitable drawback of purchasing in a low-rise.

Can I ask a serious question? What ever happened to the double-bowl inset sink? Did all of Toronto's developers get together about five years ago and decide that two basins was a needless frivolity? If so, I'd like to invite them over to do my dishes after cooking for more than two guests. While I must say that the majority of Origami's suites do look pretty fine — many with plenty of windows, interesting angles, some with semi-ensuite bathrooms and multiple closets — the kitchens, as is often the case, are lacking. These "appliance walls" as I prefer to call them, typically offer little by way of pantry or other cupboard space, nevermind counters that would be overwhelmed by the presence of a simple coffeemaker, and the aforementioned sorry single-bowl sinks. What's a buyer gotta do for a little counter space? (Ante-up for customization, I know.) 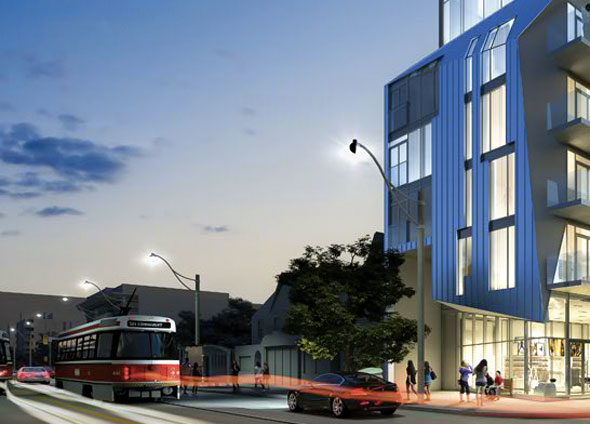 It is good looking. Invest in a heavy-duty bike lock.