What will cellular service be like on the TTC?

Luddites beware. Cellular signal (and phone conversations with it) could be about to head underground if the TTC votes to accept a contract offer from an Australian telecommunications company.

Under the plans, Broadcast Australia Pty Ltd. will pay the TTC $25 million over the next 20 years to install and run an underground cellular and Wi-Fi network in 61 current and planned stations similar to the one currently running on the New York City subway.

There, cellular signals are sent through fibre-optic cables from a central control unit to small wireless base stations at each platform and ticket hall. Service providers pay to have their signal included in the subterranean offerings.

The TTC contact is dependent on Broadcast Australia being able to sign up at least 60 per cent of Toronto's current cellphone providers - Bell, Rogers, etc. In other words, you won't get signal (unless it's an emergency) if you're with a carrier that is unable to forge an agreement with BA. That said, the TTC stipulates each carrier must have equal opportunity to participate. The new Wi-Fi network will be free and open to smartphone, tablet, and laptop users alike. 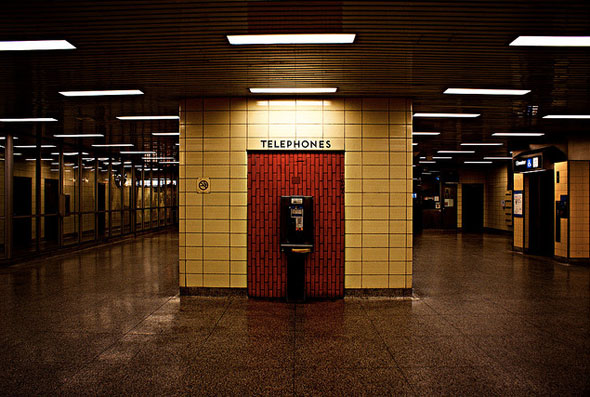 The concept has been in the works since 2009 when the TTC first invited companies interested in creating an underground network to submit proposals. Bids from Bell Mobility and Extenet Systems, a Chicago company, fell by the wayside, leaving Broadcast Australia on its own. Though service is supposed to be limited to stations, there's a chance signal will bleed down the tunnels where the stops are close together.

"This is a convenience for customers but it does allow us to communicate better," says the TTC's Brad Ross, "we have an e-alert subscription base that continues to grow in addition to social media like Twitter. When there is a problem you will get that information on your cellphone and you in turn can make some decisions and calls to work or home."

The first step will be to set up a trial service in two as yet unidentified stations. There's a very slight chance the wireless base stations could interfere with the subway's wireless signal system or cause other undesirable effects, though this doesn't seem to be an issue in above ground parts of the system.

This doesn't mean the end of the humble subway payphone, however. "They will always be there, for the foreseeable future anyway," says Ross. "Not everybody has a cellphone and they are important to things like our Crisis Link suicide prevention program and 911."

If everything goes to plan the new service will be functional across all stations in 2 to 4 years.

What are your thoughts on this? It seems like adding cell reception could actually become a money-maker for the financially squeezed TTC, but is it worth it? Will you use your phone on the subway? Speak up below.

Photos: "Claustrophobic" by Lyndsay Jobe and "Telephones - Jane Station" by Kevo89 in the blogTO Flickr pool.