Tableau Condos will rise from the ashes of the former Embassy nightclub. Glorious, isn't it? Located at Richmond and Peter, the building will feature a heritage-inspired structure at its base, separated from the residential suites above by the project's signature design element: the table. ("Tableau"... get it?!) With retail at ground and 25,000 square feet of office space on floors two and three, this mixed-use building will be the realization of a partnership between Urban Capital Property Group, Malibu, and Alit, with Wallman Architects at the drawing boards. Here's a closer look at what's on the.. er... "table." 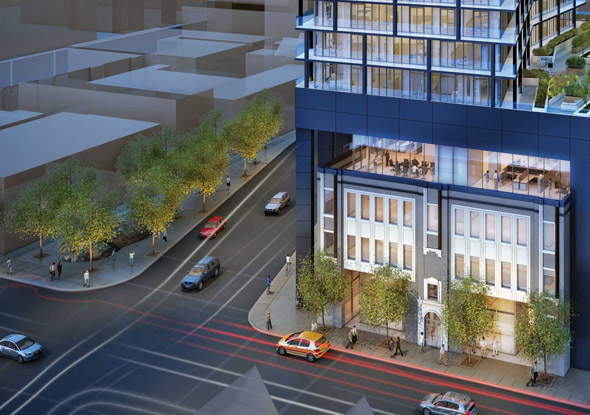 Talk about looking down on the rest of the city; these units offer some views. And none of those baby balconies with scant room for a patio chair (I'm looking at you, E Condos). Even the Tableau studio suites (which everyone knows are at the bottom of the real estate food chain) boast balconies that are over 100 square feet, with some of the two-bedroom units sporting wrap-around balconies that are close to 300 square feet. That's a lot of room for embracing the night and taking in all of the Entertainment District action. And once you get above, say, the 15th floor, you probably won't be able to make out when the club-goers down below spit up on themselves. It's win/win!

Tableau also seems an ideal option for the ostentatiously eco-minded. That is, the type who don't just drive a hybrid car, but also make a point of telling friends, family, and strangers that they drive a hybrid car. While energy-efficient appliances pretty much come standard at any new development in Toronto nowadays, Tableau also boasts a green roof (which, granted, aligns with a new city bylaw), a car sharing system, an advanced recycling program, water-efficient toilets and showers, zero-VOC paints, and a rainwater collection system that will be used for on-site irrigation, among other systems.

But best of all, Tableau offers a "comprehensive education and training program" so that residents are well-versed on the sustainability features of the building. Because heaven forbid you start describing a submersible pump rain collection system rather than a suction pump system when giving your friends the grand tour.

And a quick note about the suite shapes: it's nice to see a diversion from the big, bland boxes in the sky. Some of Tableau's units actually have unique angles, which may ease that nagging feeling that you've just dumped your life savings into an elevated storage locker. But seriously, it's a good change, and one that generally allows for the maximum influx of natural light. 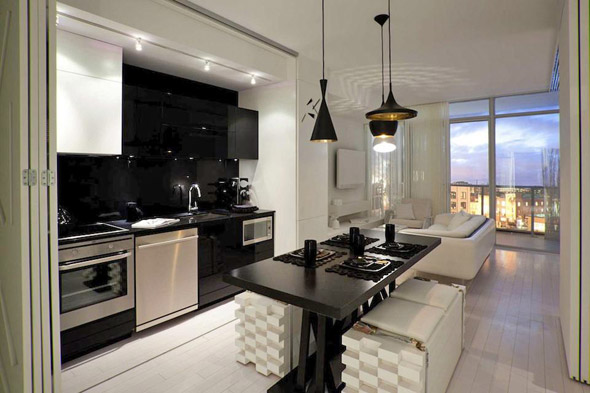 Inspiration from a table? Really? I can just see the scene; it's 3 a.m., crumpled sketches everywhere, and architects toiling in a high glass tower are on their collective last legs. "Should we model it after this coffee cup?" one suggests, raising the stained mug before him. A sea of scowls are shot in his direction. "What about my shoe?" suggests another, leaning down to remove his loafer. More mumbles. "Fuck it," the lead architect finally declares. "We'll just model the condo after this table. Now let's go home."

Needless to say, I'm not exactly moved by the "table" inspiration. I could take or leave the 90-foot green Shayne Dark "Nova" structure (which doesn't look all that different from the X Condo Shayne Dark structure), though it has been "specifically designed to interact with, and project through, the table." I think this is the part where I should warn about the risks of reading too much condo-babble print...

Moving on. Being at the centre of everything is definitely a boon (a forgotten point for my "good" section, above?), except when the area's amenities are duplicated within the building. It's not redundancy that's necessarily problem, it's paying for ever-increasing maintenance fees (because, let's face it, they won't be $0.52/sq forever) for upkeep when everything you need is literally outside your front door. Tableau has its own film screening room? Well, uh, the TIFF Bell Lightbox is literally five minutes away. And the Scotiabank theatre probably less than two. A fitness centre?

Extreme Fitness is around the corner. A games room? The Charlotte Room is just down the road. It's not that it isn't incredibly convenient to have all of these amenities within the building, it's just that I would prefer to pay for the odd game of billiards just when the mood strikes me, instead of constantly paying for everyone's games out of my monthly fees.

And perhaps I'm beating a dead horse (see my kitchen and bedroom rants Ă la Carnaby, 109OZ, INDX...) but I still believe that a kitchen should be more than a wall of appliances (perhaps even with a free counter or two), and that bedrooms should have bona fide hinged doors. Call me old fashioned, but I'm sticking with it. Tableau, unfortunately, does not share my assertion.

A heritage structure with a "table" on top. And then 34 storeys on top of that. Need I say more? 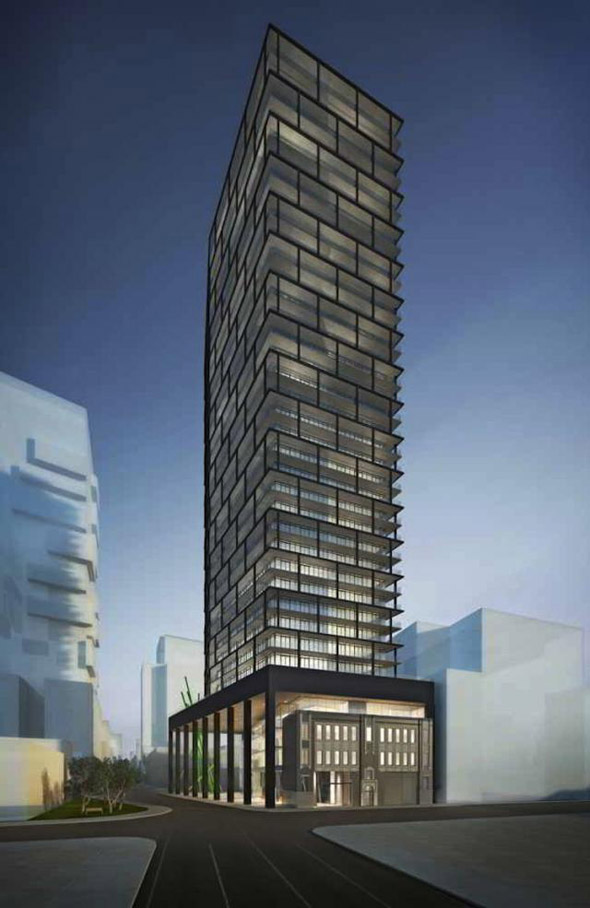 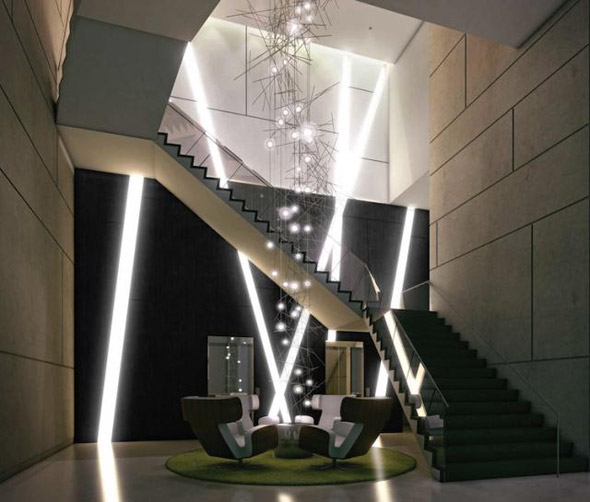