On the 2nd December, 1919, theatre tycoon Ambrose Small was hard at work in his office at the Grand Opera House on Adelaide Street West. The day before he'd sold his empire and deposited a massive $1 million cheque in to his personal account. F. W. M. Flock, Small's attorney, also in the office that evening, would be the last person to see the millionaire alive.

Just after 6:00 pm, his work for the day complete, Small left his office and bought a newspaper from a street vendor. Turning up the velvet collar on his jacket, he disappeared into the cold night, never to be seen again. In the years to come, the vanishing of Ambrose Joseph Small would become one of Toronto's most sensational mysteries and one of its most enduring unsolved crimes â if indeed it was a crime at all.

Known to many Canadians as a character in Michael Ondaatje's In the Skin of a Lion, Ambrose Small was born January 11, 1863, in Brantford, Ontario, to Daniel Small and Ellen Brazil. An ambitious and intelligent child, Ambrose was 17 when his father moved the family to Toronto where he had agreed to run the Grand Hotel on Adelaide Street West.

Small got his start the theatre business across the laneway from his father's hotel at the Grand Opera House, ripping tickets, running the bar, ushering patrons and taking underhanded bets on racehorses for $10 a week. A calculating and ruthless businessman, Small quickly rose to treasurer of the Grand Opera House but a fight with the owner caused him to leave for the vaudeville Toronto Opera House.

Despite a reputation as a reckless gambler, Small elbowed his way into management and over the next decade worked his way to chairman of the Canadian Theatrical Managers' Association, buying theatres across Ontario and amassing a vast personal fortune. 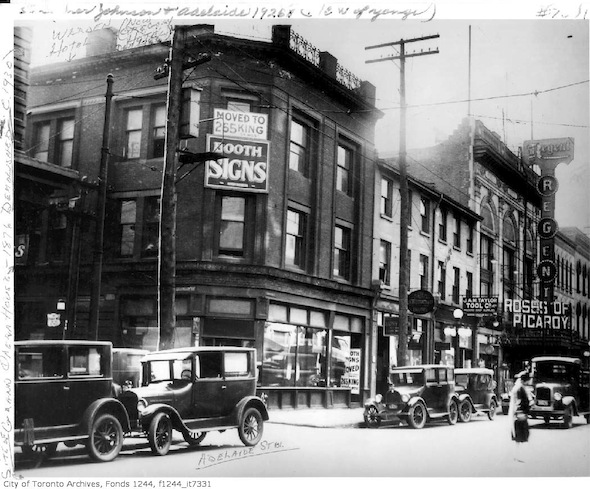 Small loved money and women, in particular chorus girls from his theatres who he rewarded with chocolate and seduced in a secret room at the Grand Opera House decked out with a lavish bed, bar and salacious paintings of nude women. Despite his lecherous ways, he married the daughter of his step-mother, Theresa Kormann, and in doing so positioned himself to inherit a significant sum from his new in-laws. Small continued to have affairs after his nuptials, many to the knowledge of his wife.

A thin man standing 5'6", Small was described as "hawk-like" by the Milwaukee Journal in the years after his disappearance, and his trademark moustache made him easily recognisable to people on the street. His closest platonic relationship was with his secretary and right-hand man, John Doughty, who he paid a meagre $45 a week at a time when Small was among the Toronto's wealthiest men. A fact that provides a key insight into the tycoon's parsimonious personality. 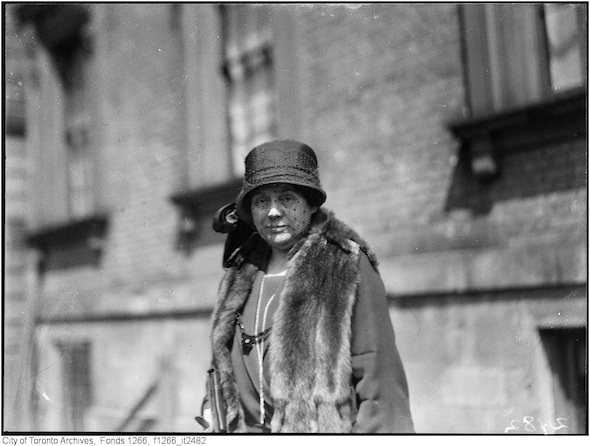 In 1919 Small sold his theatre empire amid rising costs to Trans-Canada Theatre Limited for a whopping $1.7 million, $1 million of which was paid in a single check he deposited a day before his disappearance at the Dominion Bank at King and Yonge. Norman J. O'Flynn, the bank clerk, recalled Small in a "cheery mood" to the Saskatoon Star-Phoenix on that day.

"It was all over in a matter of moments. I reached for a deposit slip and gasped when I saw the amount of the cheque".

The next day, Small vanished, leaving no trace or clue to his whereabouts. Any leads the police might have had in the early going were missed when it took Theresa Small a full two weeks to report her husband missing. 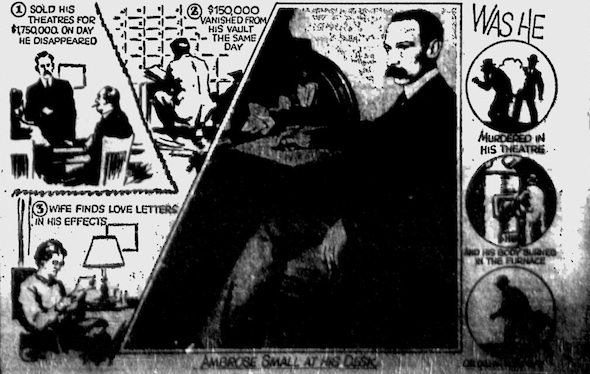 Assuming Ambrose was simply out enjoying his fortune with one of his paramours, or at least that's what she told police, Mrs. Small initially offered a $500 reward for information. Presuming a kidknapping, police convinced her to up the money to $50,000, the highest ever offered in Canada at the time, when no ransom arrived.

In the two-week period before Small was reported missing, John Doughty, the tycoon's closest ally, accepted a new position in Montreal, moved to a boarding house in the city and fled when word of his former employer's mysterious vanishing became an international sensation. The police would later discover Doughty had visited Small's personal vault twice on the day of his disappearance and taken $150,000 in bonds.

Eleven months later, in November, 1920, John Doughty was picked up working under a false name by a local police officer in Oregon City, Oregon, who recognised him from a photo circulated by Canadian authorities. Back in Toronto, Doughty led police to the missing bonds stashed in his sister's attic. His claim the money was a raise pending the approval of Small didn't hold water and he was sentenced to six years in jail for larceny. Despite threats and offers of a reduced sentence for information, police were never able to charge Doughty in connection with Small's disappearance. 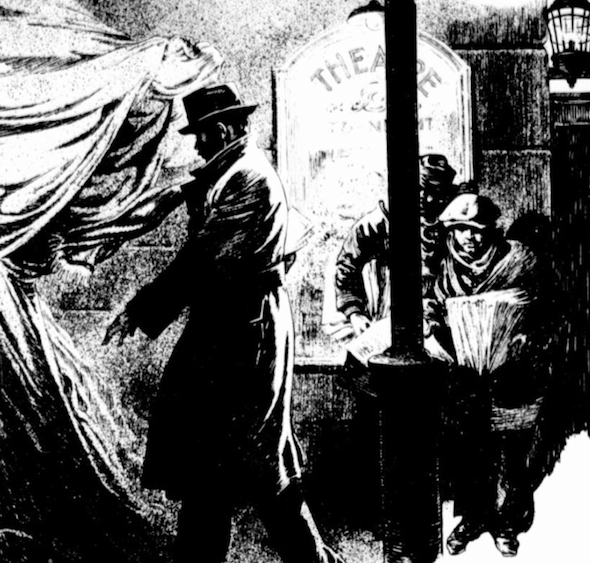 Without a body, evidence or a ransom note the authorities had no case and practically nothing to go on. In desperation, Toronto Police sent a copy of the case file in 1922 to Sir Arthur Conan Doyle, the creator of Sherlock Holmes and a leading spiritualist, in the hope the author could shed some light on the disappearance. Although he took an interest, Conan Doyle was not able to spare the time to properly investigate.

Theories Small's body had been incinerated could never be proved despite thorough examination of the Grand Opera House, several city incinerators and garbage dumps. It was also suggested Small had met with an accident or been murdered and buried in Rosedale Ravine. Digs in the area turned up nothing.

Small's fortune is perhaps the most obvious motive for any crime, if one took place. The tycoon's will, dated September 6, 1903, left all $2 million of his real estate and personal property solely to Theresa Small. After several years of probate, Small's sisters, Gertrude and Florence, were also awarded $100,000.

The year after Mrs. Small's death in 1936 a sensational injunction was brought by Patrick Sullivan, the publisher of Toronto tabloid The Thunderer, and Ambrose's sisters to prevent the distribution of Ambrose Small's estate, claiming Theresa had paid an assassin $20,000 to kill her husband and even signed a confession before her death. The alleged killer came forward claiming Theresa persuaded him to "go in on" the murder.

A judge, Mr. Justice Nicol Jeffrey, dismissed the action in 1936, citing the confession as a forgery. During his judgment he went to great lengths to ensure the late Theresa Small's name remained untarnished by the accusation. When the will was finally settled in 1954 after years of charitable donations, litigation and succession fees, just $141,000 was left.

So what really happened in this baffling case? A special enquiry by the office of the Ontario Attorney General concluded Theresa Small had nothing to do with her husband's disappearance but documentary recently pitched by Dr. Peter Vronsky to History Television claimed to have unearthed accusations of a cover-up within the police. According to Vronsky, Inspector Hammond, an officer involved in the investigation, had evidence that Theresa Small was present at the crime and that Austin Mitchell, the office in charge, had suppressed facts and scared off witnesses.

So many mysterious elements surround the case of Ambrose Small that it's hard not view every single subsequent event with suspicion. Take for instance the fate of Gertrude Small, who drowned beside her new husband when their car plunged into the Nottawasaga River in Wasaga Beach just days after their wedding.

Alex McCathie, a 38-year veteran cop with ties to the case, told the Saskatoon Star-Pheonix on December 3, 1959, "we have had many letters from various parts of the United States and Canada offering information of one kind and another in connection with the case. Many have been from cranks, but all those that appeared genuine have been investigated. They produced no result."

Sporadic sightings of Ambrose Small in various locations across the globe made headlines but always turned out to be a case of mistaken identity. On December 4, 1960, Toronto police officially closed and discarded the three-foot thick file on Ambrose Small after decades spent travelling, consulting clairvoyants and desperately searching for the faintest scrap of evidence. To this day the disappearance of Ambrose Small remains unsolved.