Why the Eglinton LRT needs to surface: Airport edition

Like Sisyphus and his boulder, Torontonians seem condemned to forever push transit plans forwards and backwards in a never-ending struggle. Proposals for rapid transit along Eglinton Avenue have been seriously promoted and rescinded for nearly thirty years now, and although work seems to finally be starting on the Eglinton Crosstown LRT, the last year has been consumed with debate over the configuration and operation of the line. And with good reason, since besides the ongoing legal and political issues, the entire concept of burying of an entire LRT line is an engineering contradiction in terms, forgoing the lower cost and easy expandability of light rail but retaining the expensive tunnels and stations of a high-capacity subway, sans the capacity.

There are many light rail lines across North America with tunnel segments and underground stations; in fact, the very first "subway" in North America is considered to be the downtown tunnel segment of the Boston Green Line LRT. Similar LRT tunnel segments can be found in cities as far flung as San Francisco, San Diego, Seattle, Edmonton, Minneapolis, Pittsburgh, Philadelphia and Newark. Even Rochester has an abandoned one from nearly a century ago. However, these underground portions are always found in either the older, higher-density downtown areas or to cross obstacles such as hills, airports or university campuses. The majority of an LRT line always lies on the surface â that's the entire point of using "light" rail.

In Toronto, the all-underground mandate of Mayor Rob Ford for the Eglinton LRT is being challenged in its eastern portion, where Eglinton is already six lanes wide (two of which are partially reserved as a rush hour busway). The Mayor is not budging yet, despite plenty of media attention on various new proposals and their proponents. 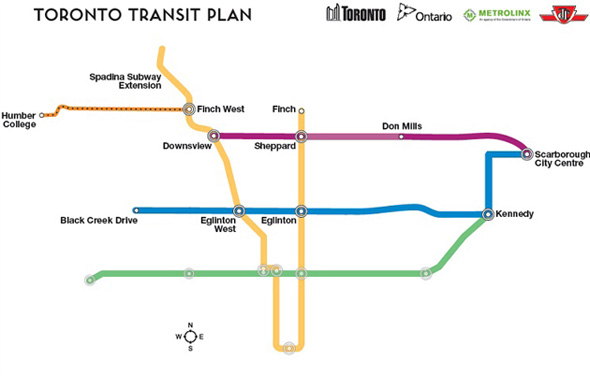 Lost in this discussion has been any mention of what will happen to the western end of the Eglinton LRT. Under the original Transit City proposal, the line would have run in a tunnel until Keele, then continued west on the surface to Pearson airport. This was later cut back to a first phase stopping at Jane Street. Under Mayor Ford's 2011 all-tunnel agreement with the province, the Eglinton line is now to stop underground at Black Creek Drive, more than 1 km east of Jane. While it is important to get the Crosstown line to the surface in Scarborough, it is of equal importance to bring it above ground in Etobicoke for reasons that go beyond current cost savings.

Those reasons are of course Pearson airport and its thousands of workers and millions of passengers. While an Air Rail Link is now under construction, the projected fare is likely to be sky-high and it will certainly not serve airport workers, budget travellers or those trying to get quickly to central and eastern parts of the city. Connecting the Eglinton Crosstown line to Pearson is vital for Toronto's economic health, but it's a goal that will never be met if the Eglinton line remains banished to the costly netherworld beneath the streets.

It's at least 12 km from Eglinton Ave & Black Creek Drive to the terminals, which would mean a cost of ~$3 billion dollars to extend the line (underground LRT construction assumed at $225M/km). If the Fordian all-underground directive holds, and if the western end of the LRT is not brought to the surface in the first phase, you should be hopping on the Crosstown LRT for your hoverflight at Pearson sometime around the year 2112. 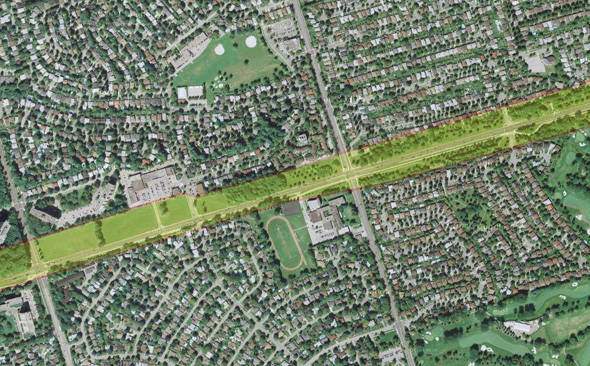 On the other hand, nothing could be simpler than a much less expensive surface LRT running down Eglinton West. While the street is hemmed in by existing development up until Keele, the section from Black Creek to the airport is wide open thanks to the long-cancelled Richview Expressway. Land was purchased and protected for this project in the 1960s, and the corridor is clearly visible today on aerial maps. This would allow for ample room for a surface LRT extension in the median of a widened Eglinton Ave.

But would such a physical arrangement be operationally practical? It depends on whether one takes guidance from the comments section of the Toronto Sun, or from real-world examples outside the GTA. It turns out that there are many precedents in North America for such surface LRT lines to the airport in environments very similar to Eglinton Avenue West. 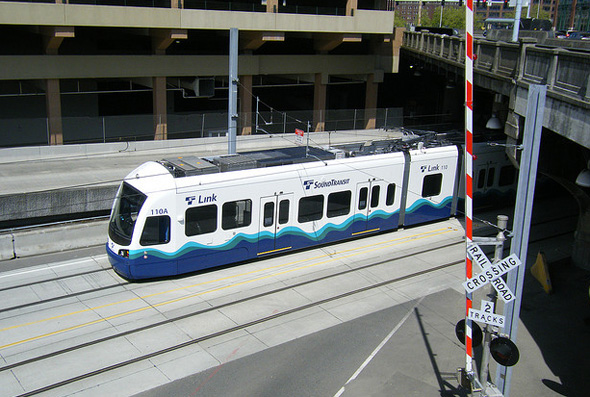 Seattle may be the closest match, with an LRT that travels in a tunnel downtown but then emerges to run in the median of a four-lane major avenue through a low-density suburban environment on its way to Sea-Tac airport. It is not quite as fast as an all-underground configuration, but it was designed and built in the time it took Toronto to plan and cancel Transit City. And the fare for the 31 minute ride from Sea-Tac to downtown Seattle? $2.75.

Phoenix and San Jose also run LRT down the medians of arterial streets to their airports, and Salt Lake is currently building just such an extension to its LRT service. There's also the option of placing the Crosstown LRT beside Eglinton Ave West in the reserved expressway land rather than down the middle of the street; in this circumstance the configuration would closely resemble the DART line to Love Field in Dallas or the Hiawatha line to MSP in Minneapolis.

To stretch Toronto's meagre transit dollars as far as possible, it's critical that the Eglinton Crosstown be buried in a tunnel only where urban geography and transportation planning require it. The most savings are indeed to be found to the east, and the current Scarborough discussion is life-or-death in terms of saving funding for other transit projects in the city. But do not neglect the future of the western terminus or the shortsightedness of today will mean a bus to the airport along Eglinton for many decades to come. Blow the tanks â it's time to surface.