You know what the best part about Friday's fog was? It seemed to swallow up the attention that Lake Shore was getting. Here's a look at the week that was.

"Friends tell me their son is just graduating as a chef from wherever and I say, 'Well, you know, he's not a chef, he's a cook, and he's probably a very weak cook, too.... I don't think Toronto will even be able to recognize this because their expectations of good food have become less and less. Restaurants used to be about food in this city -- today everything is a show." - Libell Geddes, owner of the Fifth, on Toronto's young chefs, er, cooks.

"We acted on short notice. I was making arrangements with other police forces right up until the last minute to send officers to Toronto. You can imagine the cost of last-minute flight bookings from, for example, Newfoundland and British Columbia. It gets costly very quickly." - Toronto Police Services Chair Alok Mukherjee on the G20 price tag.

"Through the hard work of the TTC, funding from the provincial and federal governments, and in partnership with Metrolinx, planning and construction on Transit City is well underway and even attempting to stop it would be foolhardy." - Stuart Green, speaking on behalf David Miller, about the fate of Transit City as Rob Ford prepares to take over the mayoralty.

"Our intention is to make provocative television. On one hand, we received a lot of attention, but on the other hand it was not necessarily the kind of attention that we wanted. For the record, we are not a racist show. If we offended anyone in any way, we apologize." - Lake Shore co-producer Maryam Rahimi on the now notorious sizzle clip released earlier this week. 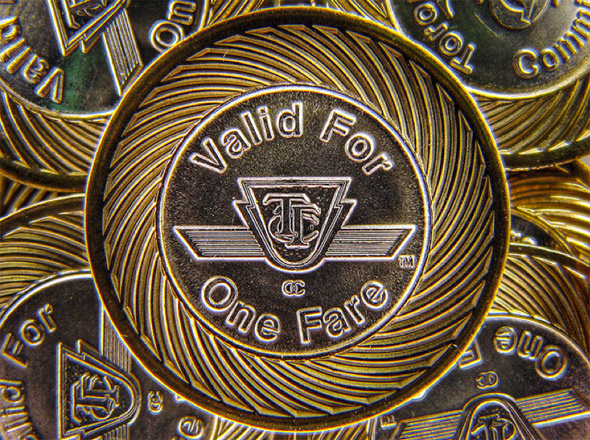 2000 - The number of fake tokens the TTC estimates are used every day.

20,000 - The square footage of the new bowling alley coming to Toronto.

$1.95 - The starting bid on a Union Station glass shoe, surely the strangest item featured in this post.

4 p.m. - 4 a.m. - The approximate duration of the crazy fog in Toronto on Friday and Saturday.

In lieu of one of the other segments I usually run here -- a poll, a post from the archives, or interesting video clips -- I think it makes the most sense to share some more photos of the incredible fog that blanketed the city on Friday night. For the original set of awesomeness, check here.

Lead photo by the author. TTC token photo by fotograf.416