The new facade at First Canadian Place creeps into view

As many know (or have noticed), First Canadian Place, Toronto's second highest structure, is getting some exterior work done. I won't go into the details because they've already been covered in some depth here and elsewhere.

But, the short version of the story is that the old Carrera marble exterior had, over the years, become both dirty and dangerous -- so much so that some of the once-white slabs had fallen from the building. Given that it'd be a complete PR disaster if one of those slabs of loose marble were to strike a passing pedestrian, owner Brookfield Properties decided to address the problem. And so, starting from the top, the marble slabs are slowly being replaced with spandrel glass, which will be safer and more energy efficient.

So that's the back story, now to the point of this post. After the scaffolding went up in late May, I was expecting to get a look at the new facade within about a month. But, it wasn't until recently that I started to spot the first signs of the new "skin." And even then, it was tough to judge it in any meaningful way because of the poor perspective offered by a ground-level view. As such, I was particularly keen to have a closer look through my telephoto lens when I found myself on the rooftop patio of the Thompson Hotel Saturday morning (that'll be another post). 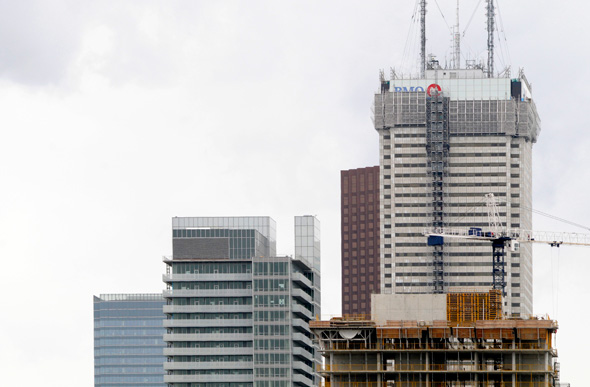 For those interested in the building, it's actually a great time to have a look at its transformation. With the old and new facade in clear view, one now has a glimpse of both the past and the present of the iconic (at least by Toronto standards) office tower. For my part, I tend to think the new exterior is a bit stark. But, assuming it keeps its snowy white colour better than its predecessor, this may not ultimately be a bad thing. When I think of the skylines of other North American cities, I can't immediately bring to mind a white tower of its size and presence.

So given this glimpse at the new facade, what's the verdict? Confining ourselves to the building's aesthetic merits, do you think Brookfield made the right decision with the new material?