When Rocco Rossi announced his fantasy tunnel earlier this week, it got me thinking about other grand Toronto projects that were proposed but never completed. There's been some dandies over the years, many of which are discussed in Mark Osbaldeston's excellent book, Unbuilt Toronto: A History of the City that Might Have Been. From the Queen St. subway line to Metro Centre, had even a few of these been built, Toronto would be a considerably different city.

It's impossible to determine with any certainty which of these projects would have had the greatest impact on the city, but my nomination would be Harbour City.

Proposed in the late 1960s, the plan would have dramatically reshaped Toronto's waterfront. At the time, there was serious talk of relocating the island airport to the east end of the islands (near the Leslie St. Spit), which would have freed up the west end for urban development. But more than just a project involving the existing land on the island, Harbour City was to include mixed-use development on an additional 510 acres of artificial land. 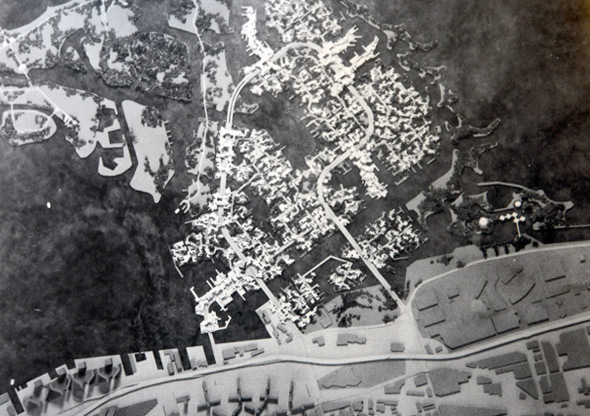 Designed by architect Eberhard Zeidler -- who built Ontario Place and the Eaton Centre -- the island community would feature canals, a ring road that would connect it to the mainland (at Bathurst and Strachan streets) and pre-engineered building modules that could be organized in a variety of ways (retail, residential, single units, double units, etc.).

Remarkable isn't it? We almost had a canal town on our waterfront. So what happened?

There was certainly strong support for the project in some circles. Jane Jacobs, for instance was quite the fan. She went so far as to say that "Harbour City is probably the most important advance in planning for cities that has been made this century" (qtd. in Osbaldeston). But, the project had its vocal critics as well. Then councillors John Sewell and David Crombie weren't convinced that building a town on reclaimed land in the harbour was necessarily a good idea. 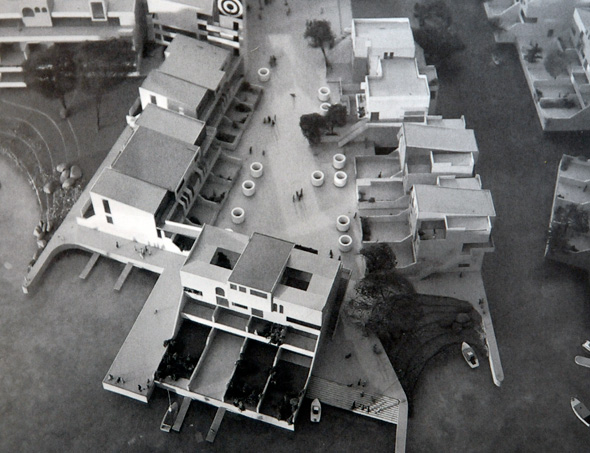 A variety of complications were cited by the plan's opponents, chief of which was the environmental impact of having a motorboat-accessible city out on the water. There was even concern that the development would further encourage the building of the Spadina Expressway down to the Gardiner.

In fact, to a great extent it was the Spadina Expressway that killed Harbour City. The opposition to the inner-city highway had been so strong that the provincial government - who was in charge of the project - was wary of taking another beating from the public. So, when Bill Davis was elected premiere both projects were eventually put to sleep, though the official announcement on Harbour City didn't come until 1972.

I'm not sure if it's good or bad that Harbour City was never built, but a Jane Jacobs endorsement does go a long way. At the very minimum it would have been a fascinating addition to the waterfront. I can't help but think, however, that the 1970s-style stackable structures would have eventually been considered a blight on the city. Still, it's intriguing to wonder about what might have been.