Electric bikes and scooters in Toronto

Electric and pedal powered bikes, solar-powered vehicles as well as gas and electric scooters all made an appearance at the Eco-Wheels Show this weekend in the Distillery District.

Since I first started riding my Veloteq scooter-style e-bike about a year ago, I've become accustomed to the joy of commuting on two wheels without breaking a sweat. But I've also gotten used to the backlash from the Lycra set, as encountered on the Waterfront Trail en route to the Eco-Wheels show. 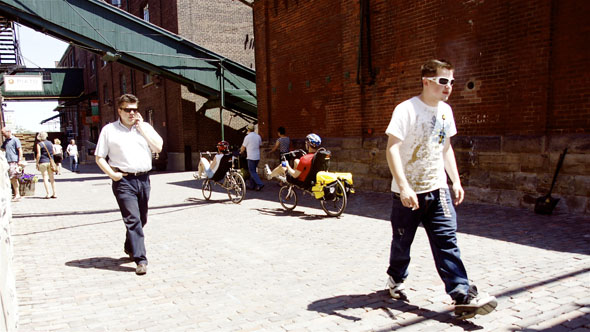 I was eager to see some of the latest offerings in the world of electric bicycles from various Toronto-area vendors at this inaugural gathering.

After I parked and charged my e-bike at Segway of Ontario, I made my way around the Distillery District. It was refreshing to see a couple of recumbent bicycles leisurely riding among the weekend crowd. 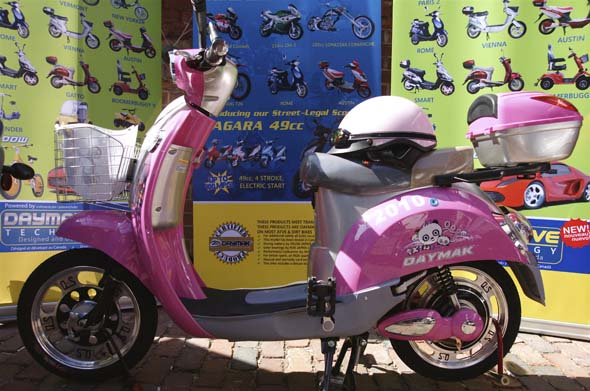 Daymak, one of the first players on the Toronto e-bike scene, showed off a few of their 2010 models, including this hot pink number. 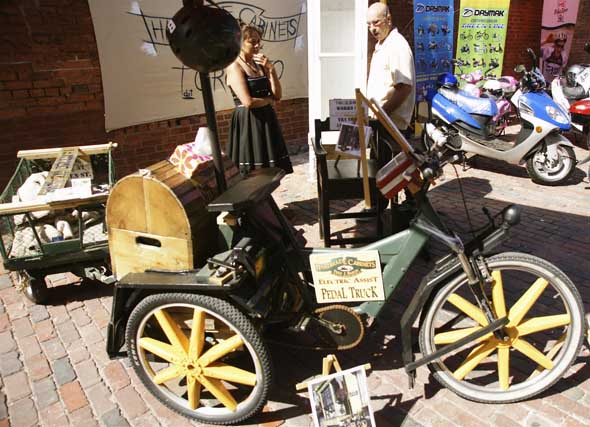 One of the oddities of the Eco-Wheels show was a custom electric-assist "pedal truck" trike and trailer made by the Handmade Cabinets store in Leslieville. It can haul up to 1,200 pounds of cargo a few blocks, offering a much greener alternative to renting a truck or operating a gas-guzzling commercial moving van. 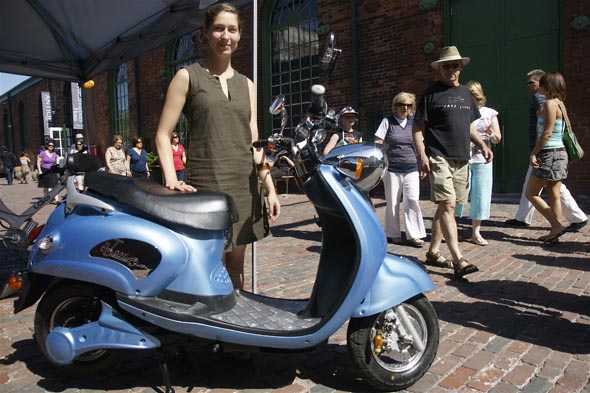 Among the highest quality scooter-style e-bikes is the Canadian Motorino brand, which has become one of the more popular choices among eco-conscious folks in British Columbia, where they're based. They stand out among scooter-style e-bikes with their three-mode switch that gives selectable torque, speed or econo-mode, and have motorcycle-grade components.

Priced at around $2,100 this electric vehicle offers a serious emission-free alternative to gas scooters for quick commuting around Toronto. Especially if you're not inclined to get your motorcycle license and pay registration and insurance. At about 10 cents per charge, and a range of approximately 60 km, this may persuade you to leave your car at home for most of your short trips around the city.

A couple of local distributors for Motorino bikes in the Toronto area had some of their wares on display: ep rider, at Bloor and Kipling, and Station Ski & Ride, in Markham, Ont. 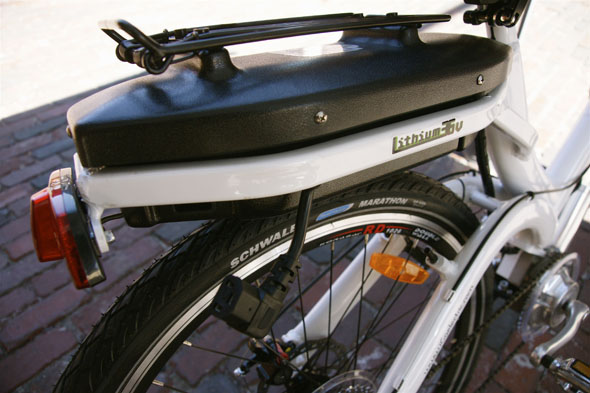 If you'd rather have your e-bike in the traditional-looking style, you may consider one of the many electric power-assist bikes, such as the iGO electric bike from a Lachine, Que. company, featuring the newest LiFePo 36v/10Ah battery technology. 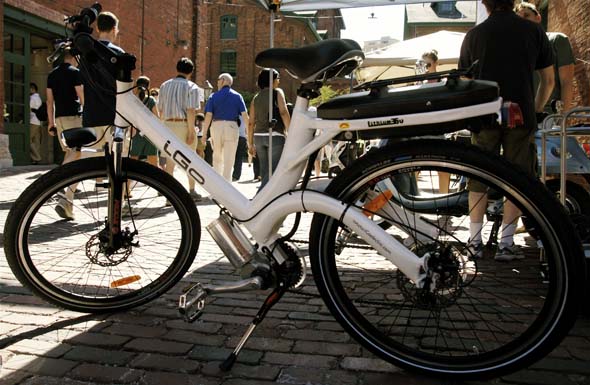 Similar in shape to the iGo is the eneloop bike by Sanyo. 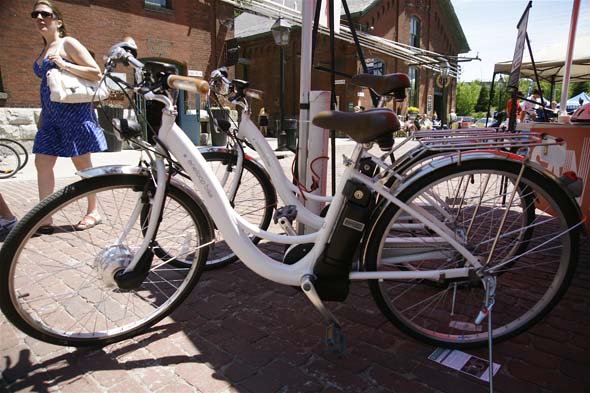 The company created by former bigwig with auto parts giant Magna International is behind the Bion-X electric bicycle, with its intelligent mobility system. It looks like white is the new black this season. 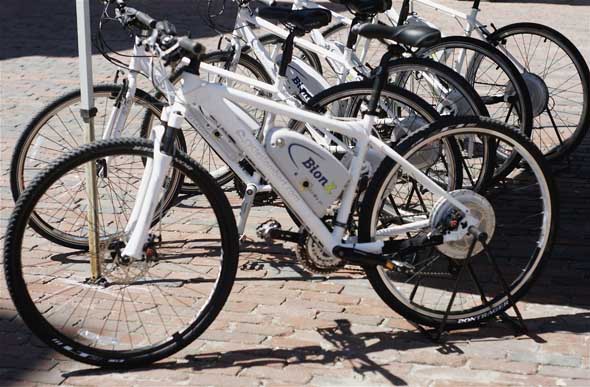 Perhaps the most striking e-bikes today is the German-designed A2B Metro. 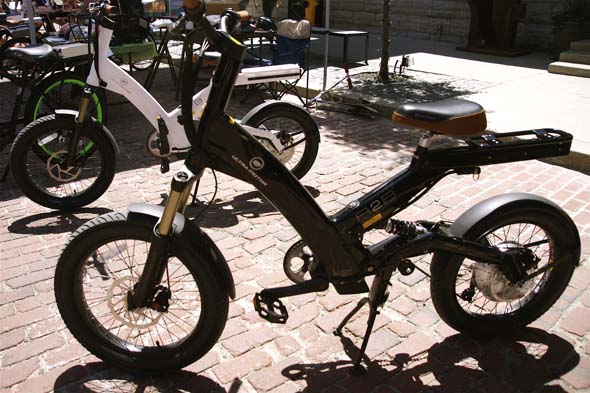 There were other, more colourful electric bikes on display, including a bright orange Pedego step-through electric cruiser and its upright lime green Pedego Cruiser counterpart. 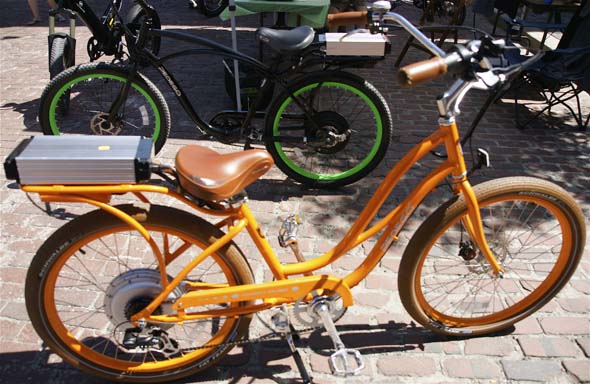 Canadian Tire had a pretty lackluster display of cheaper bikes on display, including the Schwinn Premise which comes in just under $1000. 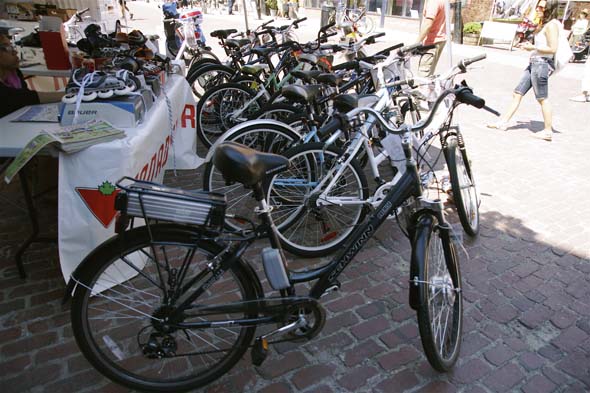 Before I left the Eco-Wheels show, I stopped by the Yamaha booth, where they had much bigger bikes that all ran on gas. It's a pity Yamaha's Electric Commuter EC-02 concept, released in Japan five years ago (or even the more recent EC-03) is far from production, especially in the North American market.

Still, it was pretty neat to see Skeletor (top) making a comeback in the scooter set. 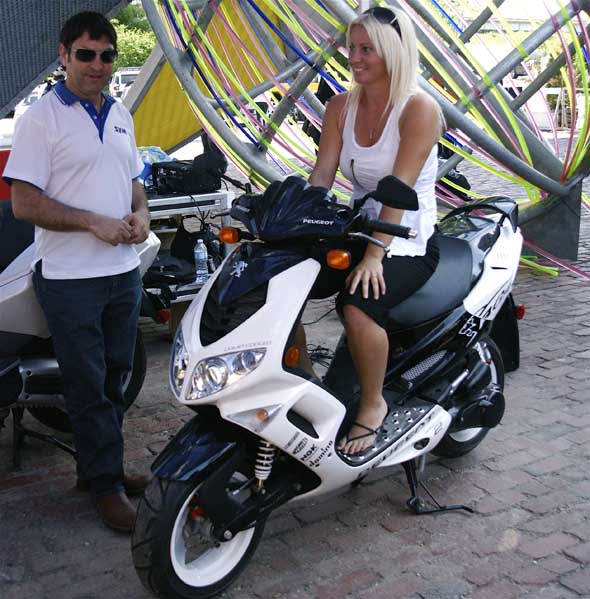 I hope that one day there will be all-electric options from companies making some of the nicest-looking gas scooters, such as Peugot. 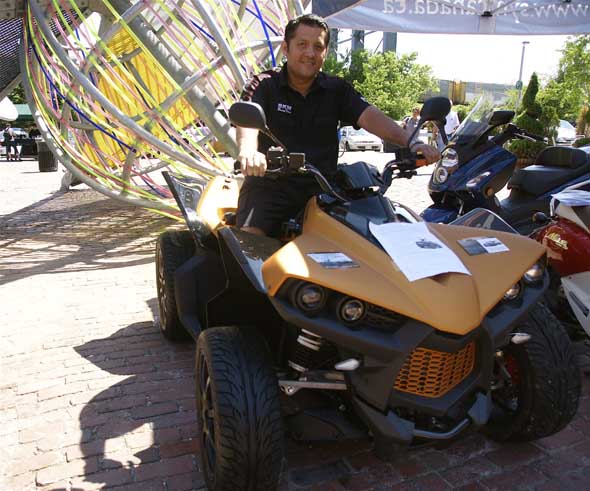 Perhaps out of place among all its two-wheel brethren was the Cectek Estoc, four-wheel motorcycle, which was quite the beast. 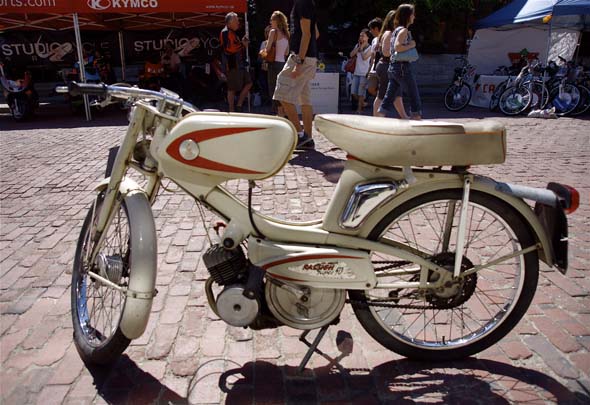 There were some old relics on display too, including this Raleigh Super 50 from the late '60s and a cream Lambretta with really comfy-looking seats. 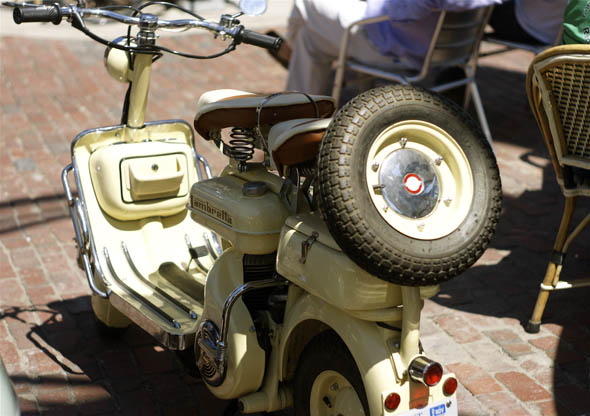 It was good to see places offering information on motorcycle training, as well as scooter rider training from Humber College and others. Perhaps one day I'll take the plunge and get a real scooter or motorbike. But I think it likely won't happen until affordable, all-electric options become available. 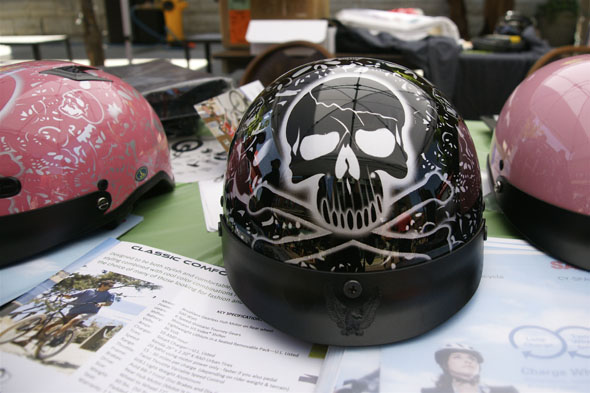 I look forward to next year's Eco-Wheels show, where I hope to see representation from the Ministry of Transportation and the Toronto police. Together, they can provide a vital role in educating the public about newer two-wheel electric alternatives and how they fit into road use in Toronto, and encouraging good relations between electric bikes and their exclusively pedal-powered brethren. 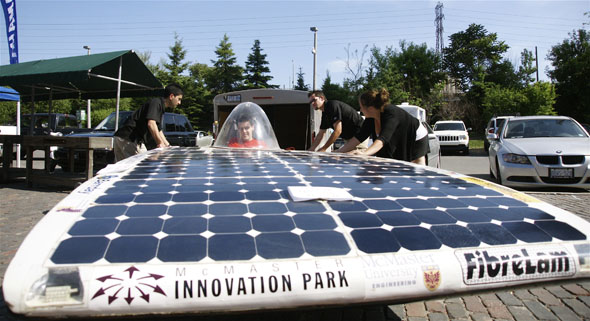