The never-ending lament for Queen West

Anyone who's lived in Toronto for at least a few years has their own Queen Street in their head -- it's usually the place they remember from their first visit, a strip of storefronts that are always in their memory, and make a ghostly overlay on top of the shops that are there now. It's only been gone for a few months, but I'm sure there's some young person for whom Pages never existed, and the expanse of papered-over windows at Queen and John is a blank slate waiting to be filled in -- whereas for me, whatever moves in next will always be haunted by the shadow of Marc Glassman and his tables of cultural theory books.

Which is probably why the lament over the future of Queen West is a constantly recurring refrain, as every few years a new generation's memory of the street is swept away, even defiled -- though they might not have even been born when the Police played the Horseshoe, or you had your choice of places to buy surplus circuit boards.

Crystal Rickard, store manager at Pam Chorley's Fashion Crimes, remembers coming to the strip from Port Perry 12 years ago, when it was still dominated by small, independent boutiques.

"It was the first time in my life that I tried sushi, and my high school boyfriend would go to Steve's and check out all the awesome guitars, and that's when I decided I was really turned on by fashion," Rickard recalls. "It was incredibly inspiring -- it had a magical, privileged feeling. I felt so privileged shopping on Queen West when it was full of those teeny, tiny one-of-a-kind stores." 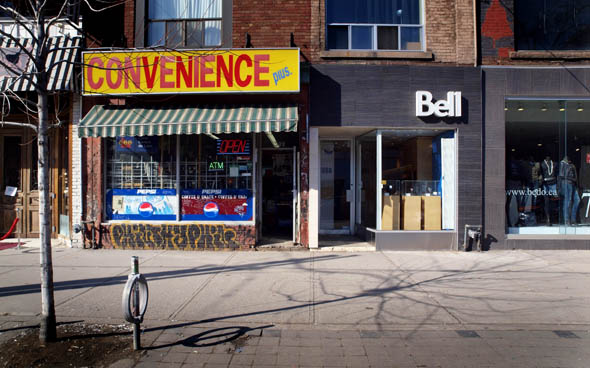 Bernard Chung, a co-owner of Black Market, moved the vintage clothing shop all over Queen West for two decades before arriving at the basement space beneath Pages' vacant shell 10 years ago. He's sure that cavernous space is the key to survival on Queen, especially as the arrival of retail chains has pushed up rents astronomically.

"We've got 8000 square feet down here, and we can offer a lot of merchandise, and that's what's kept us alive. As we've moved from one location to another, this store has been our best one -- our first store was just 500 square feet."

For Chung, the departure of sci-fi specialist Bakka Books from the strip was the first sign of something changing, followed by the arrival of The Gap across from Peter Pan -- a mainstay eatery on the strip that's gone from edgy to almost genteel over the decades. He thinks that the street's reputation as a youth market magnet is strong enough to save long term merchants, even as it transforms into our equivalent of Carnaby Street or the East Village. 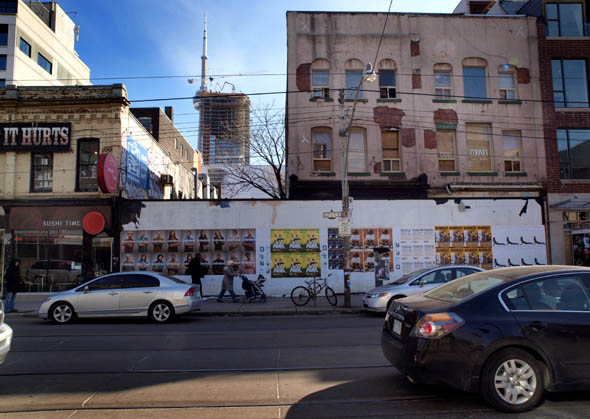 "The one thing this strip has, which hasn't changed, is that it's a great tourist strip, and every summer season we see people from all over the world coming into the store, and I don't see that changing. Queen Street will always be a popular place to visit, and for younger kids it's a great place to hang out and visit downtown." 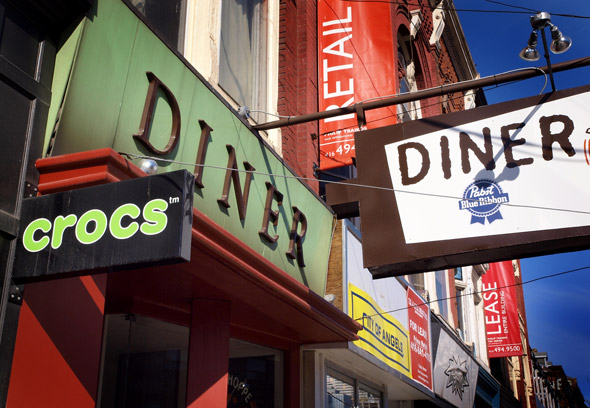 For Rickard, the closing of the BamBoo was painful, but she really misses Barney's, the tiny diner across the street with its famous chili. Personally, I'll always remember Edward's Books and Art, Mood Indigo and Hollywood Jobbers, and the used newspaper store that almost no one else can remember. But the last sinew to snap was when the Stem finally closed, a greasy spoon whose menu had, admittedly, become more inedible over the years. I hadn't been there for years by the time it closed, which is probably telling, and I'm certain that my final disappointing meal of eggs and home fries there is probably lodged in someone else's memory as the pinnacle of some bygone Queen West golden age.