The CNE opens in Toronto on Friday which means that the midway grounds are finally coming to life. The rides began arriving last week from fairs in Saskatchewan, and by next week they'll have transformed what's a parking lot most of the year into the gaudy, cacophonous, sweltering attraction that epitomizes the Ex for most visitors. 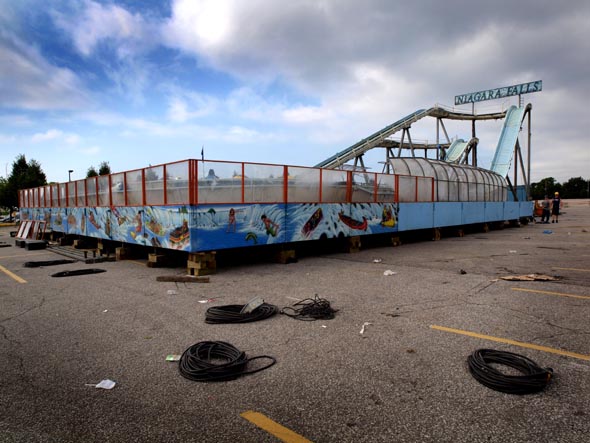 CNE director of operations Virginia Ludy tells me that they've gotten a head start this year, commencing their set-up just before Caribana instead of just after, and that prep time feels luxurious for a change. It's a good time for the Ex - the precipitous drop-off in attendance of the late '80s and '90s has been reversed, and the city is once again talking about integrating the vast Exhibition grounds into the city proper, instead of leasing it piecemeal and starving it of resources. 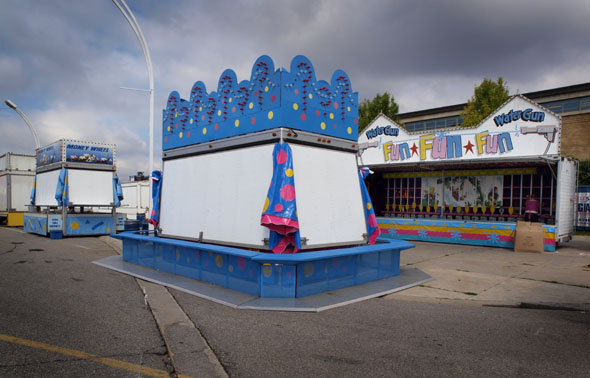 One thing that seems to have gone forever is the seedy, sleazy fringe of the midway that Ex visitors remember thriving in the '70s, when Conklin ran the fairgrounds. Freak shows were still part of the circuit back then, and for me at least the Conklin logo - a stark graphic that suggested nothing less than an inebriated clown - brings back memories of the trailer murals advertising the headless woman, and the bikini-clad beauty who, doubtless thanks to some crude lighting trick, transformed into a gorilla.

"Times have changed," says Ludy. "The public has raised the bar - we see cleaner, newer, more attractive midways than years ago." Conklin was just one of the midway contractors bought out by North American Midway several years ago, and NAM has had the CNE contract for five years - a plum, considering that the Ex is the fourth largest fair in North America, the largest in Canada. 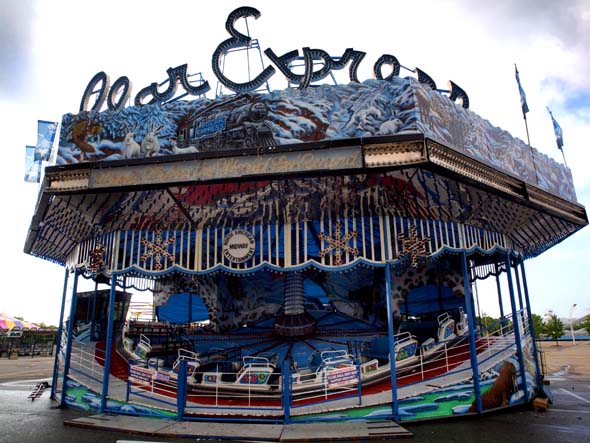 The midway site has a lot of good underground facilities, says Ludy, but most of the rides still run on generators, though these days they're fueled by biodiesel. Walking the grounds, I'm pleased to see that my favorite ride, the Polar Express, is back in its usual pride of place; it's a comforting sight, even if I haven't been on it since my oldest daughter was born six years ago. The way she's growing, I'll probably be back on in a year or two, but it hasn't been the same since the music blasting from the ride's speakers changed from "Immigrant Song" to techno, though it still sounds like the same carny bellowing "Do you want to go faster?"

One of the advantages of a big operator like NAM is that the rides, which endure a punishing workout for decades, are on a stringent regular inspection schedule, from both NAM and CNE personnel, in addition to the Technical Standards and Safety Authority (TSSA) staff on site for the whole of the Ex. Along with the disappearance of the freak shows, it's made the midway a safer place, though some of us, when pushed, still have a lingering soft spot for those greasy, dodgy days.

After a period of neglect and contraction, the Ex is expanding again - besides the Direct Energy Centre, the Ricoh Coliseum and BMO Field, there's the new Allstream Conference Centre nearing completion behind the walls of what was once known as the Automotive Building. Most of the growth is centered around the Princes Gates at the eastern end of the grounds, while on the western side, near the Dufferin Gates, the remnants of the older, more genteel agricultural fair and its beaux arts pavilions still stand, echoes of the same age that produced the great world fairs in Chicago, Buffalo and St. Louis. 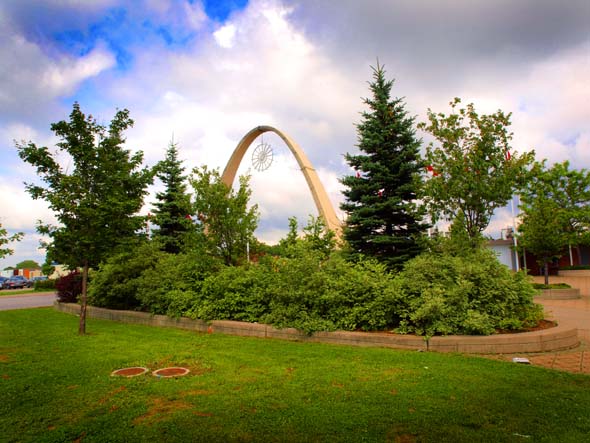 It's probably a good thing that the Ex was able to save structures like the Government of Ontario building, the Arts, Crafts & Hobbies building and the Horticultural Building by turning them into homes for the Liberty Grand, Medieval Times and the Muzik nightclub, but it seems a shame that the most elegant part of the CNE grounds are so underutilized; except for the bandshell and the weekend of the air show, they're barely part of the Ex during its three-plus week run. 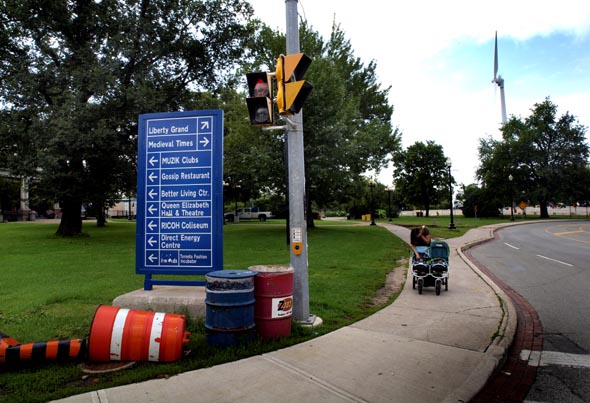 It's no surprise that this part of the grounds went into eclipse beginning in the '60s, when the baby boom generation began remaking the world to suit its need for speed, colour, cheap thrills and rebellion. Ironically, as the same generation begins slipping over the lip of retirement age, they might rediscover the joys of gardening and the dignity of landscaped grounds between stately buildings, abetted by retirement income that hopefully wasn't too devastated by poor investments. If they can let go of their younger selves, they might breathe life back into the part of the Ex they once abandoned. 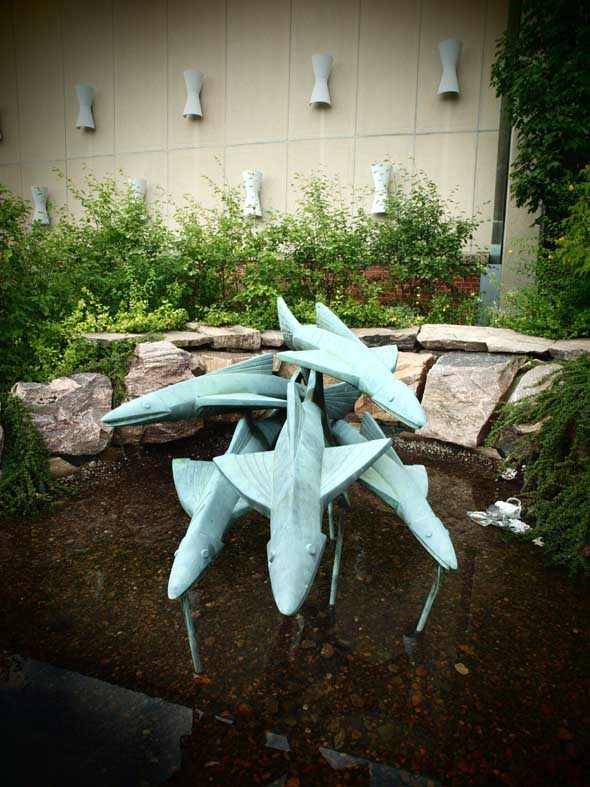 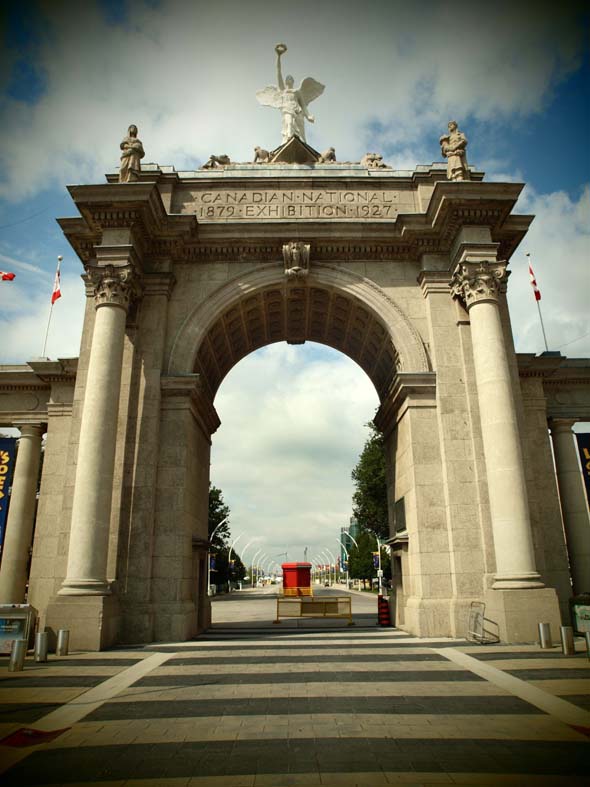