The Corner of Roncesvalles and Dundas West

Roncesvalles ends where it merges with Dundas West, an intersection that hasn't changed much since the postcard image above was shot just before World War One. It was - and still is - a streetscape of small shops interrupted on the west side by a few random blocks of homes. While Queen West was Parkdale's commercial "high street" during its brief 19th century heyday as an independent village, Roncesvalles served the same purpose for the prosperous folk living on the eastern edge of High Park, and still does today.

While a long post-war economic bust preserved most of Queen West, Roncesvalles rode out the demolitions and city makeovers of the 50s, 60s, and 70s held tight to the bosom of the Polish community that settled there - preserved in kielbasa, so to speak. By the '80s the area was feeling a bit shabby and moribund, but a subsequent invasion of young families priced out of the downtown have spiked house prices and transformed the face of Roncesvalles. In the process, the neighbourhood has assumed the - probably apocryphal - reputation of hosting the highest birth rate in the country. 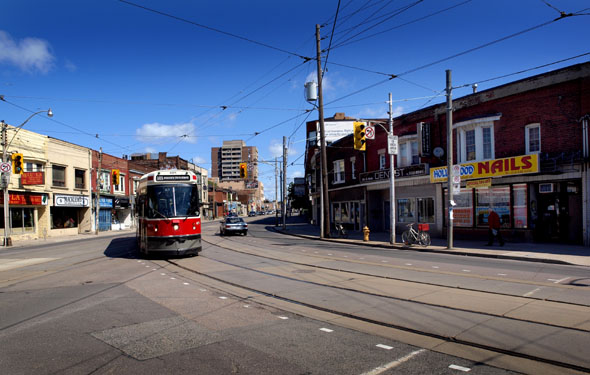 Just to the right of the picture of the intersection today is Macklem's, purveyor of prams and strollers to this fecund demographic; opened in 1945, the store seemed out of place as the area aged, but its location was ultimately serendipitous. Just across the street, the curving row of shops on the north side of Dundas have lost their crenellated ornament, but little else has changed, although the postcard image makes the scene look much tidier than today. The stores were relatively new, to be sure, but the retouching and hand-colouring of Valentine & Sons - whose aesthetic guidelines demand the erasure of streetcar and power lines - has probably neatened up our window on the past. 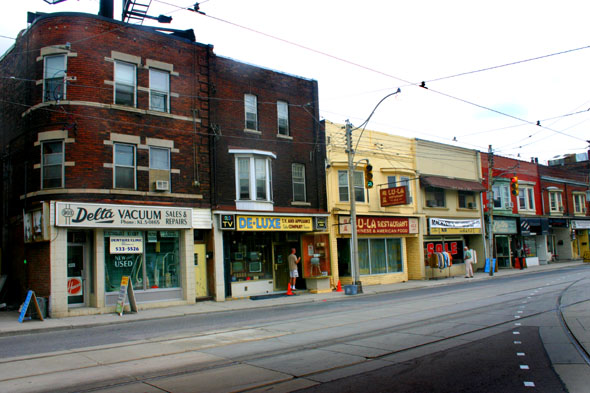 The intersection's retro character was probably what made it a principal location three years ago, when the movie of the musical of the movie Hairspray came to town to film Toronto as Baltimore, and Roncesvalles and Dundas got an early '60s makeover that was the talk of the neighbourhood. I know I wasn't the only one who snuck on to the set with a camera, and there was some wistful talk about how nice it would be if they left the sets in place. The faรงade of the plus-size dress boutique run by Jerry Stiller was built onto the bank building right behind where the postcard was shot, just before its transformation into the Starbucks that's an emblem of the neighbourhood's new status as real estate hot spot. 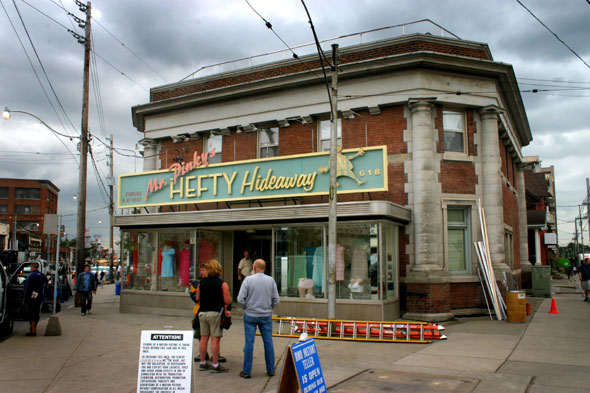 The only remnant of Hairspray's brief tenancy is a bit of set dressing left behind on the second floor of what's now Nosh Bistro, just next to the Lebanese consulate and the gaming store - a For Rent sign, appropriately enough. The area is changing fast, as Polish delis are giving way to organic butchers, and as I get ready to move from the area after over 20 years, I can't help but feel that, even before I got laid off, we were being priced out of the neighbourhood.

You know you've lived somewhere too long when you can't erase the ghosts; I never cease to be stopped short by the new sign that went up after the marquee on the Revue Cinema crashed down late one night, and I still harbour an utterly futile hope that a cinema will once again occupy the convenience store that took over the Brighton Cinema - an ancient "nabe"-turned-rep-house that closed in the mid-80s, just a few years after I saw Eraserhead there for the first time; the dinginess of the place actually worked as a sort of lo-tech Sensurround. These are the kind of thoughts I've been having as I make my long goodbye to Parkdale-High Park, on the way to making another neighbourhood home. 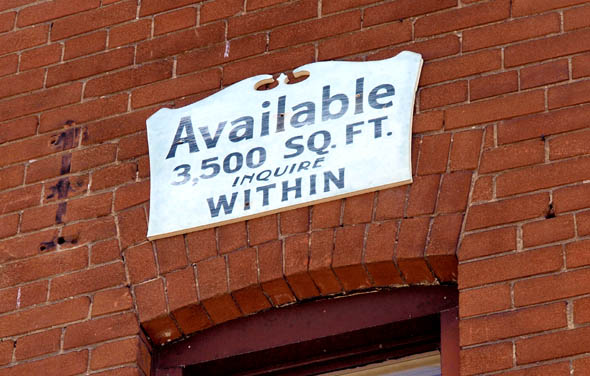