Why is Getting Garbage Cans Right so Difficult?

Maybe I'm not giving the complexity of garbage disposal its due. But is creating a practical, decent looking waste bin really that hard?

The city has experimented with several models over the years. The latest is a grey, sci-fi-looking design made of tough plastic, with a metal bar at the bottom (reminiscent of elementary school washroom sinks) that opens the garbage slots.

As Christopher Hume pointed out in his Toronto Star column yesterday, what happens in the winter when the bar is covered in snow? It isn't very accessible either. Pedestrians in wheelchairs, for instance, can't step on it to open the slots. Spacing Toronto gave the bins a failing grade and found that some were placed too far into the sidewalk, reducing space for pedestrians.

While some of these important issues were brought up when the prototype was revealed in June 2008, the final model on sidewalks near you looks the same.

I went out to test them this morning and found some of these concerns valid. Though the slots open if you push them, the point of the bar is to avoid touching the lids. They get gross with use. But why design a feature that can't be used half of the year or by a percentage of the population? I also found their placement intrusive in some areas, almost in the middle of the sidewalk.

I do like their size though. It's not as big as the mammoth ad boxes or as small as the bright blue box. Though I almost missed this feature, an innovative piece is the cigarette butt slot. The garbage and recycle holes are bigger and fit more items than the popular silver garbage bins with the three slots. 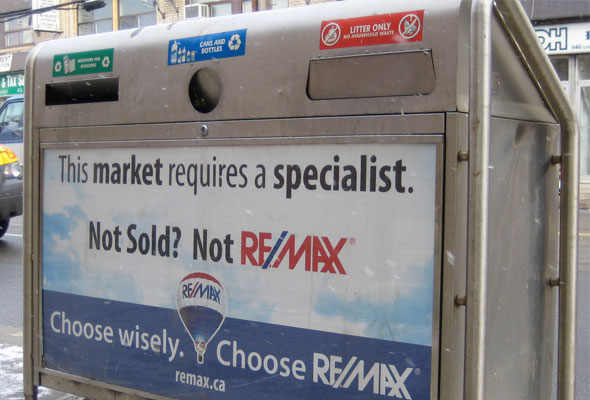 The new bins with the bar are part of Toronto's Coordinated Street Furniture Program that harmonizes the city's street furniture, from garbage bins to bus shelters and benches.

I can see why we need a plan to unify Toronto's street furniture. A walk around my neighbourhood yielded the five different cans pictured in this blog, each too small, too big, too rudimentary or not completely functional. 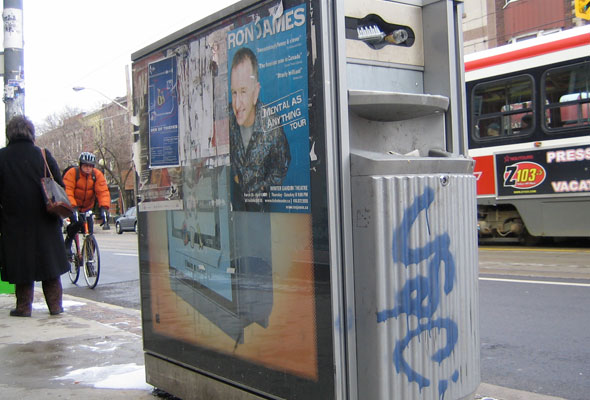 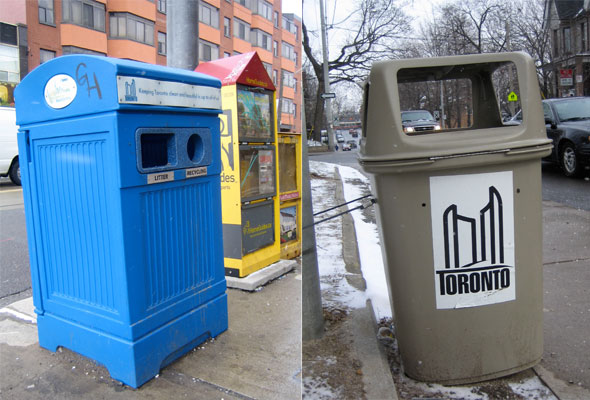 To City Council, here is a checklist to consider when the next design of garbage bins is up for grabs:

• Make sure the bins and their features can be used in all seasons.

• Make them big enough to fit the garbage, but not too big that they block the sidewalk. It would help the former if they were emptied more often.

• We like the ability to recycle and the slot for cigarette butts. Keep those options.

• Make sure to consult the city's Accessibility Design Guideline. It's only a few links underneath the Coordinated Street Furniture report on the city's website.