The Sri Lankan government's current offensive against Tamil fighters has taken a horrific humanitarian toll. Toronto's Tamil community, along with a diverse group of allies, has organized multiple demonstrations over the past week and a half. Last night I went to the Sri Lankan consulate to witness their latest effort, a candlelight vigil and call for peace.

The event was scheduled for the evening of Sri Lanka's Independence Day, and the turnout was very impressive, with thousands of people carrying candles, placards, and flags. There was a wide array of guest speakers, including representatives from various unions and student groups, and from the national NDP. The event was partly a vigil for civilians killed in the recent fighting, and partly a plea for Canadian diplomatic pressure on Sri Lanka.

"Sri Lanka: Stop The War! Canada: Help Us!" was the most commonly heard chant. "We are counting on the support of all Canadians," one man told me. "Stephen Harper and Michael Ignatieff will listen if there are enough of us." 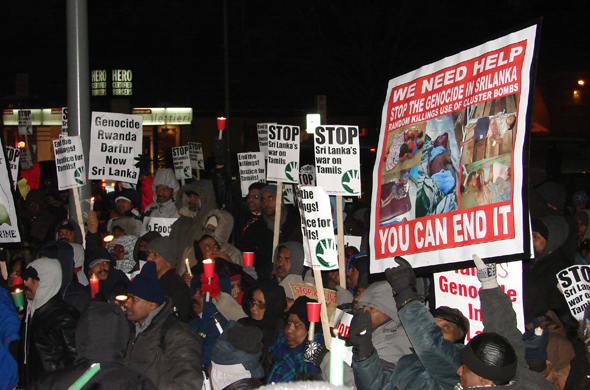 The superficial similarities between the two crises forced me to compare this demonstration to the rallies for and against the recent Israeli strike on Gaza. Due to the dire situation Tamils in Sri Lanka face, I knew there wouldn't be any of the discordant jubilation displayed by the pro-Israeli side, but I was impressed by the total absence of any sectarian attacks against Sri Lanka's Sinhalese majority. I had no reason to expect support for the Tamil Tigers, but after seeing all the Hamas flags at pro-Palestinian rallies, this, too, was a welcome absence. The only intemperate behaviour I witnessed was the beating of an effigy of Sri Lankan President Mahinda Rajapaksa with sticks, and this was quickly stopped by organizers.

So, why is this the case? Why are Torontonian supporters of Israel and Palestine so much more heated when most of them are neither Israeli nor Palestinian. After all, the majority of people at this event were either Sri Lankan immigrants or first generation Canadians. Tamils in Sri Lanka aren't any better off than Palestinians in Gaza, and certainly face far worse troubles than Israelis. So why is Toronto's Tamil community able to express its opposition to Sri Lanka's actions without resorting to the deplorable behaviour so often seen at Israel and Palestine rallies? Is it their very proximity to events, if not literal then historical, that forces them to act more soberly?

Whatever the reason, I was happy to see it. The plight of Sri Lankan Tamils is, of course, depressing, but it was encouraging to witness such an event with no religious bigotry, no calls for ethnic cleansing, and no support for terrorism. I wouldn't think that's asking for a lot.