Unfortunately, the strike-free situation may be no more. Today we were given more than the promised 48 hour notice of a strike. Beginning 4am Monday April 21, 2008, TTC workers will be on strike if a deal is not struck by 4pm on Sunday April 20.

This will be an excellent opportunity for you to get to know your neighbourhood a bit more intimately. Stop in at that green grocer you've never been to before, poke your head into the shop that claims to sell groceries, but looks an awful lot like a convenience store. Stick close to home, because as Jerrold so articulately pointed out in this morning's Morning Brew, the strike "will be a complete clusterfu*k on our roads and on GO transit"

At least the weather is nice, making walking and biking far more pleasant than even a couple of weeks ago. The problem is, there are an awful lot of people out there who rely on the TTC to get to and from work, and work is too far for a bike ride - cabbies and downtown parking lots are going to be very busy in the next little bit.

Of course, for those that can't afford to catch a cab and don't have a car, this will be far more than just an inconvenience. For those who have no other way to get to work the strike is dangerous. We hope for understanding bosses, flexible workplaces, alternative work arrangements, but the truth is that's a luxury most folks don't have. So, this strike will squeeze people already living on the edge in a way that will be hard to recover from. This isn't lost on union president Bob Kinnear, who told reporters that the minute TTC workers walk off them job they become "public enemy number one."

One thing's for sure, the Union has been careful about image during all this. The acknowledgment of the hardships a strike will be caused, and the WorthaMillion.ca campaign (already covered by Jerrold earlier) have been front and centre. 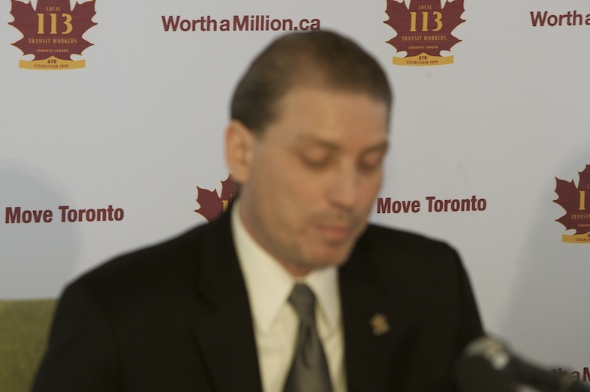 At today's press conference Kinnear kept repeating that this is about equality. The main sticking points are compensation during injuries, pension and benefit plans. Kinnear pointed out that City of Toronto, and other GTA transit operators (he specifically identified Mississauga and Brampton) are all in a better position than TTC workers on these issues.

He urged the public to contact city politicians and make sure that "fairness is being brought to the table." There is still time for politicians to step in, in fact, the reason for giving more than the promised 48 hours is because Mayor Miller is currently in China. So our fingers are crossed for another last-minute reprieve because this will be a full withdrawal of services.

And if this song of strike is sounding familiar, that's because you remember it from 2006, and 2005.

The TTC has not yet responded to the strike announcement, but I will update this article as more details are known.

TTC has released a statement, that basically says they have nothing to say - "The Toronto Transit Commission will not comment on the threat of job action at this time. Its focus remains on reaching a fair, negotiated settlement."

So, now you know that starting Monday there may not be any TTC (but really, you probably expected that). What's your solution? How are you going to get about in the city during the strike? What kind of effect will the strike have on your life?

Oh, and the award for cheesiest news conference line ever goes to Bob Kinnear for his statement that the mayor should have a sign on his desk that reads "The bus stops here" - me thinks the speech was being written late into the night, and this line was fueled by one too many Jolt Colas (or Redbulls, whatever it is the kids are drinkin' these days...)