Former proprietor of the Queen Street West club Nasa, Applegath now "stuffs envelopes for a living". Stuffing them with wicked vintage concert tees, team jerseys, custom t-shirts, and even a bit of retro cotton for the dog. And doing it quite successfully. Applegath was also commended for his vintage buying guides, demonstrating his "commitment to authenticity".

I shot him an email to congratulate him, and asked him a few questions about his store, his experience with eBay, the award, and his future plans. Read on...

KG: How did you get started in the vintage concert t-shirt business? Had you tried to sell anything before focusing on the vintage t-shirt market? Was eBay your first outlet for sales?

JA: I used to manage Industry nightclub and left to open my own place. It was 1999 - and while we were looking for locations I got addicted to the rush of auctions, selling all the things I had stored away from my child hood. It helped me pay the bills and make room in my place before Nasa opened (which was a retro themed nightclub on Queen St W). After we sold Nasa I already had the eBay knowledge and realized that t-shirts were quickly being elevated to a collectible status online so I jumped on board.

KG: Do you have a team for your store? The design of your storefront is pretty awesome... did you create it yourself? How do you handle the volume of sales? Do you have a physical storefront for those who'd like to pick up their winnings? 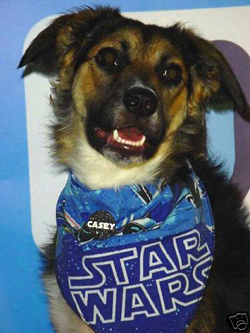 Defunkd is pretty much a one man operation. I designed the layout and did all the graphics, but had some help with the HTML formatting. It's my full time gig, and I basically stuff envelopes for a living. The employees at the post office frown when they see me coming. I work from home, no storefront, but I do allow local pick-up, and I also offer Torontonians $2 shipping.

KG: eBay is full spammers, spoofers and frauds. How do you find the security of eBay? How do you deal with the fraudulent activity (or have you come up with some way of avoiding it all- if so, let me know!)

JA: The security of the eBay site is great, I've never had a problem with it. It's the clever people off site that keep coming up with very creative ways to mimic eBay, so they can phish for passwords and credit card info. Some of them are pretty convincing - if only these people used their powers for good and not evil. It's part of the reason eBay introduced an email system and alerts within your account - if the email doesn't appear within your eBay mailbox, then ignore them.

KG: Do you think Defunkd would be as successful if it weren't for eBay? How do you think winning this award will affect your sales?

JA: eBay is the best destination for my particular business, and most collectibles for that matter. When someone wants a specific vintage shirt they come to eBay first. In the real world it would be like opening a vintage store at Yonge and Eglinton rather than Kensington. Sure, you might still succeed, but it will cost you more to operate and you wont have an automatic customer base. My biggest hope is that this award attracts Torontonians, as they represent less than 1% of my customers - and I'm also having a 10% off celebration sale until Sunday.

KG: Your buyer's guides are a great way for someone to learn how to successfully buy a vintage shirt, and an excellent resource for any new eBayers out there. What made you decide to write them up?

JA: I think the straw that broke the camel's back was when I saw someone pay $700 for a fake Iron Maiden shirt, and then left positive feedback about it. Reproductions and forgeries were flooding the market and really affecting my business so I wanted to help educate buyers on the subject. I also fielded questions all the time about authenticity and realized there was a need for this type of information.

JA: That's a toughy because in the last three years, I have experimented a lot extending my product base - but realized people come to Defunkd for vintage shirts. And because everything is genuine I am severely limited by what I can find (I can't just pick up the phone and order another 100 units). I have another vintage brainwave in the oven, which would be a new account but very complimentary to the current business. I'm also working on the side, consulting with traditional retailers who want to create an online location. eBay is user friendly - but it can be very overwhelming to someone with a huge inventory and the knowledge I have is invaluable. The $2000 prize will be invested in these projects.