Outpost Coffee Roasters has been trying to keep a low profile since opening a couple of months ago, but this part of Bloor - just at the southern edge of the Junction , right on the fringes of the Junction Triangle and Roncesvalles Village - really has nothing quite like it in this area, and it's about time people discovered this micro-roastery and cafe.

Owner Troy Kelly has been roasting beans since 2006; he trained with Willem Boot of Boot Coffee in Mill Valley, California, and had a wholesale roasting biz called Big Smoke Coffee at Weston and Sheppard for a while, before finally deciding to open his own coffee shop where he'd roast his own beans. 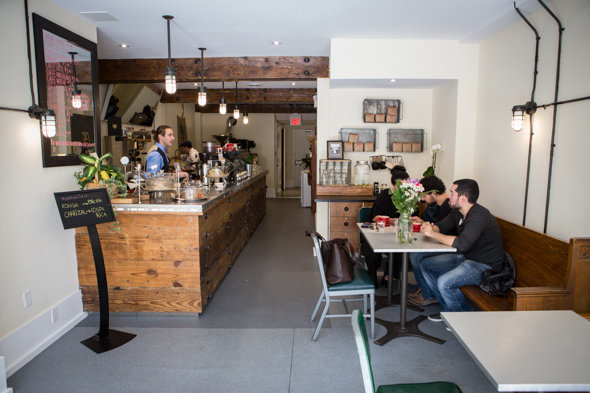 So far, Kelly is only working with single origin coffees (he may expand to blends in the future). He roasts the beans on-site in small batches every two to three days and plans to change up the offerings seasonally. 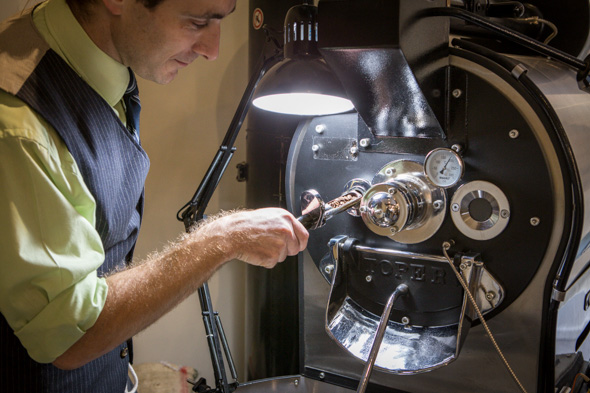 Currently, he's got ethically sourced beans from Brazil, Colombia, Costa Rica and Ethiopia. When I visit, Brazilian beans are being used for decaf and espresso. Shots are pulled on a Kees van der Westen Mirage machine Kelly acquired from Cafe Myriade in Montreal. 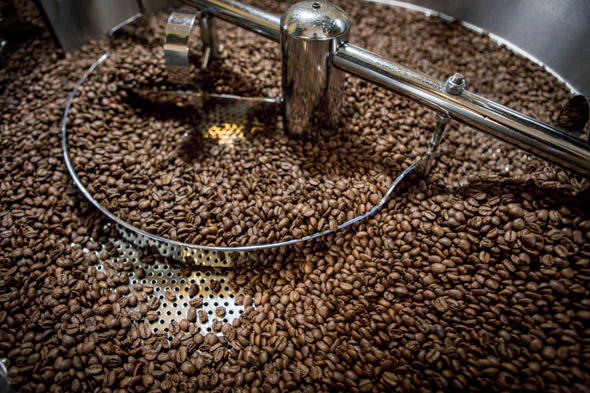 He still needs to work on his latte art (Kelly's looking to hire talented baristas, so show him your skills if you've got 'em), but aside from the lack of that final flourish, the components of his drinks are all quality, down to the Sheldon Creek Dairy cream top, whole, non-homogenized milk (50 cents extra) that can be used to create your foamed beverage of choice. 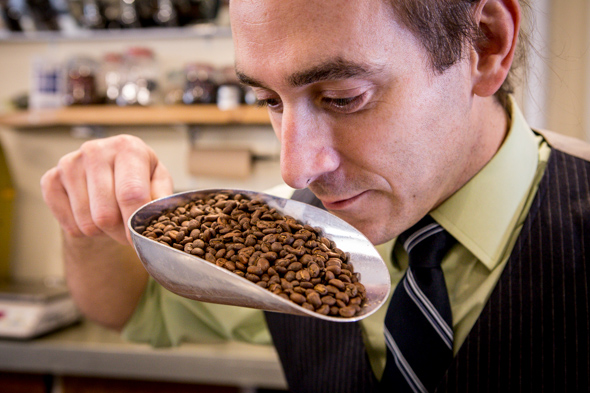 Unlike some other coffee shops that have been focusing solely on espresso lately, Kelly is trying to veer customers away from ordering an Americano ($2.60), which is essentially watered-down coffee, and turn them on to one of his drip brews instead ($1.95 each). 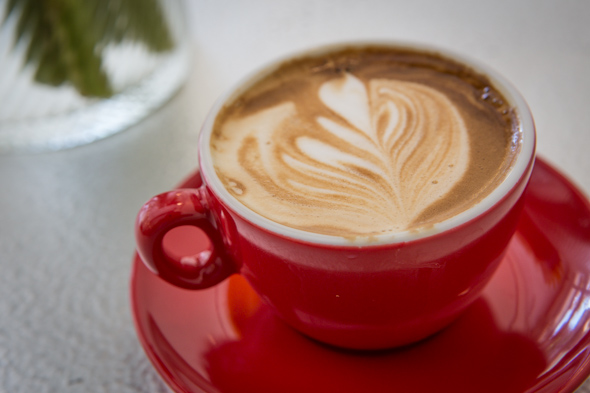 He'll let you sample his three offerings while he explains the roast process and the flavour profiles that should come through, and if you like what you taste, you can purchase 他-lb, 340g bags of his freshly roasted coffee beans ($15-16) to take home with you. 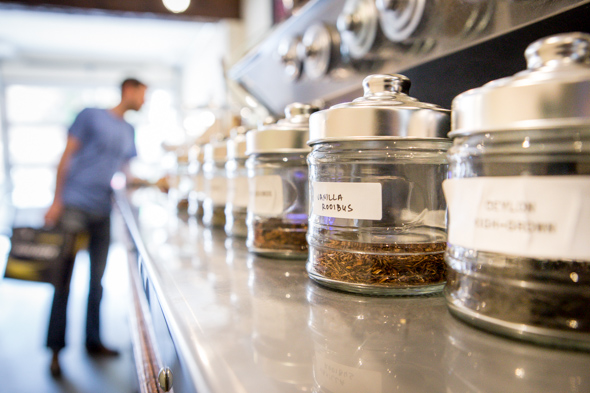 If you're in the mood for something other than coffee, there are loose leaf teas from House of Tea , and for eats, gourmet sandwiches ($7.95) made in-house by chef Roberto Porco. 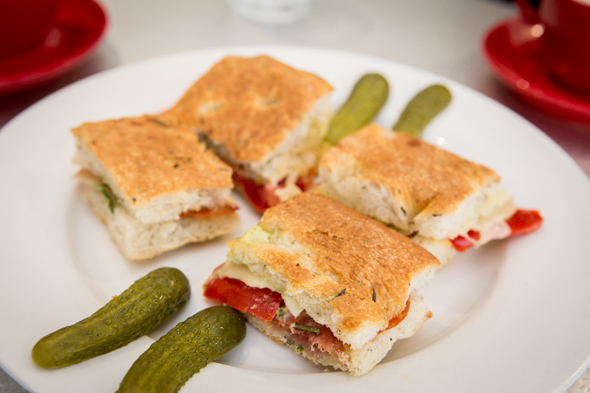 Weekday baked treats are from OMG Baked Goodness while on weekends, there is some east-end love with pastries from Bonjour Brioche . 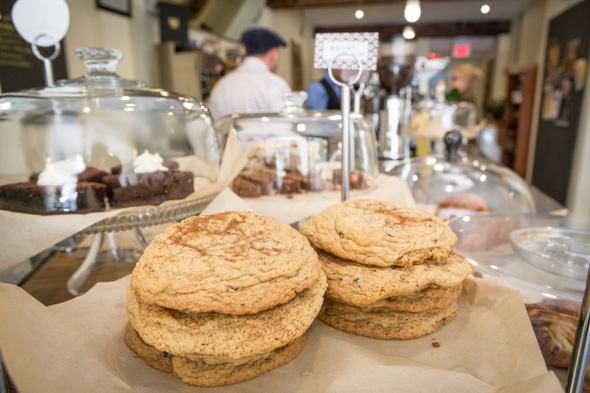 The small cafe has a bright, rustic industrial vibe with wood beams and furnishings, where you almost feel like you're on a boat (Kelly used to serve with the Royal Canadian Navy). Kelly and Porco make a point of wearing bow ties (or neckties, depending on the day), and cheerily greet patrons, of whom quite a few have become fast regulars. 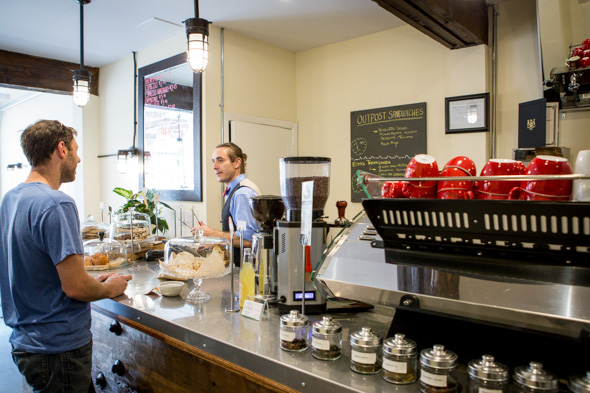 The two want to create a sense of community here they feel the area's been lacking. "We want to bring old-school customer service back," says Porco. So far, it seems like they're succeeding. 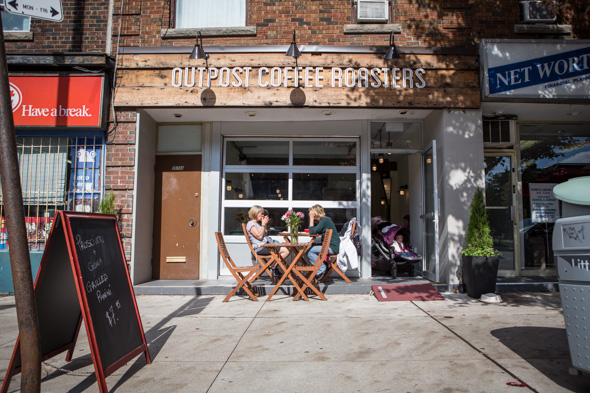