I wish the new Ezra's Pound had come along a few years earlier. When I was living at Dundas and Bathurst, the only sign of life on that strip was Saving Grace . A few solid establishments had been there for years ( Café Braziliano , Musa ), but west of Manning wasn't looking too good and development was essentially nil. I moved away before all the new clothing stores, cafes, pubs and salons really dug in their heels. These days, a trip around those parts is like walking through a glorious urban experiment on neighbourhood migration. 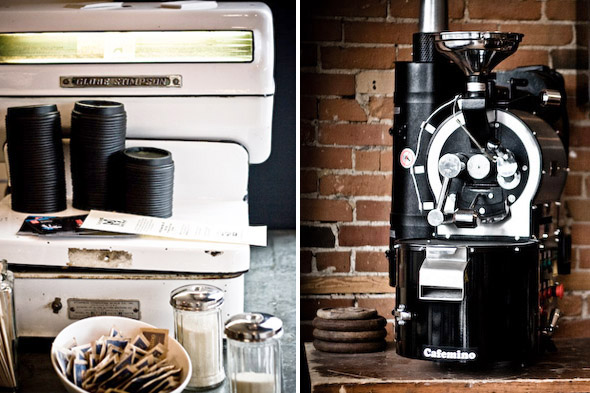 Alyssa and I were near the area on Saturday, taking in some Contact with friends. We had lunch in one of my old haunts, California Sandwiches , where we got full on veal and sausage. Drowsy, we thought about some coffee to get us home, and had the delightful convenience of finding ourselves in close proximity to Ezra Braves' new digs - just west of Clinton on Dundas. 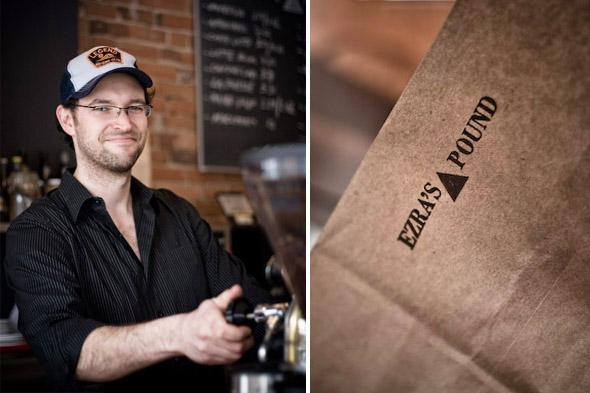 "Braves - like the Atlanta Braves," he tells me. I'm jealous. Ezra Braves has an awesome name and an awesome café. Actually, he has two awesome cafes (of the same name). The first Ezra's Pound is (near my current house!) at Dupont and Spadina and always hopping. The second Ezra's seems to have followed suit, just one month into business. The first time my Contact entourage walks past (on our way to get veal), the place is completely full. "Dundas is to Queen what Dupont is to Bloor," says Ezra, citing the similar artsy crowds and welcoming neighbourhoods. 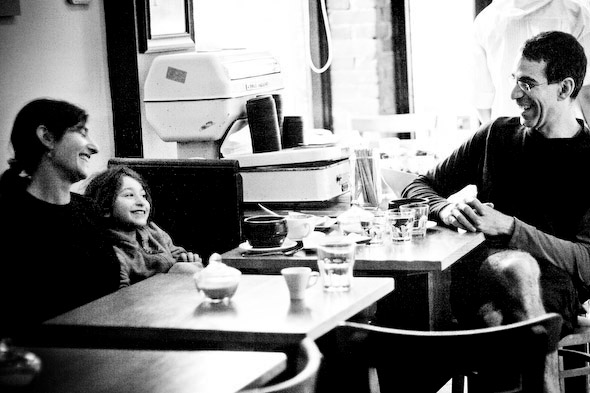 When we return (after the veal) they're forty-five minutes from closing and the place is quiet, almost empty save for a sweet little family enjoying the goods and Ezra's company. These guys make pleasant conversation while we sprawl out on a table with jackets, camera gear and a daily paper. It starts to rain outside. Excellent. We're going to wait it out in here and I couldn't be more comfortable. 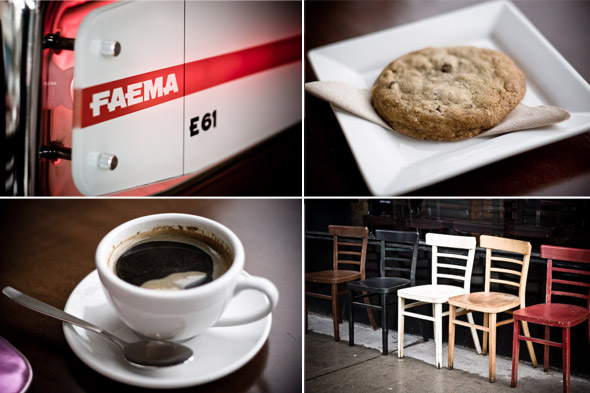 While our coffees are being crafted on a good-looking espresso machine, we discuss what makes a good café in this city. The collective agreement narrows the criteria to three simple things: stellar coffee, lazy tunes and clever decor (not to be confused with lazy decor and clever music). We put a mighty check next to all three. Ezra's Pound has 'em and then some. 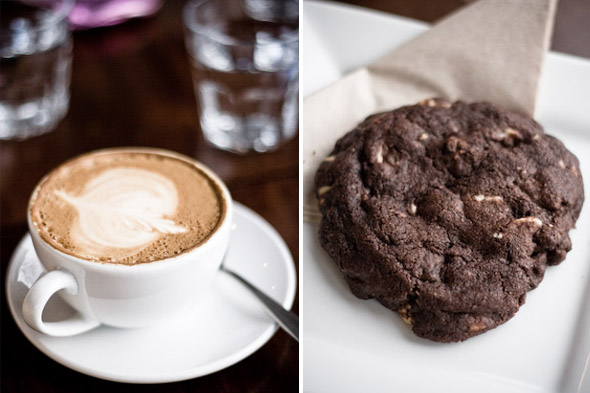 Our coffees turn out smooth and strong. Alyssa has a (really crafty and attractive) cappuccino ($3.71), smooth and light as they come. My Americano ($2.62) goes down strong and easy. It puts me in a good mood. In fact, I'm downright peaceful. Alyssa, on the other hand, has not had any coffee for a week and a half (some kind of healthy experiment... go Alyssa go....) so she's not feeling peaceful after her cappuccino - she's feeling grreat! 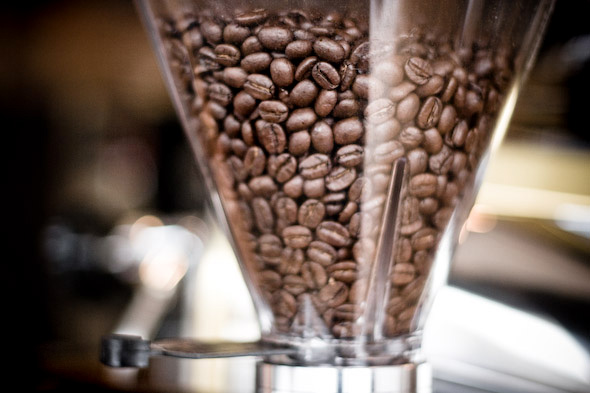 The coffee is a grand feat because Ezra Braves roasts his own organic, fair trade beans. He gets them green and ensures they come environmentally sound. "We have strident environmental policies," he says. All the take-out gear is greenshift , and local product is used whenever possible. The goods are baked on site, including the baguette on which you can have peanut butter and jam for a few bucks. We choose a couple of soft and buttery cookies ($1.90) and rugalach ($0.92), and go at them slowly to the tune of The Stones and The Velvet Underground. 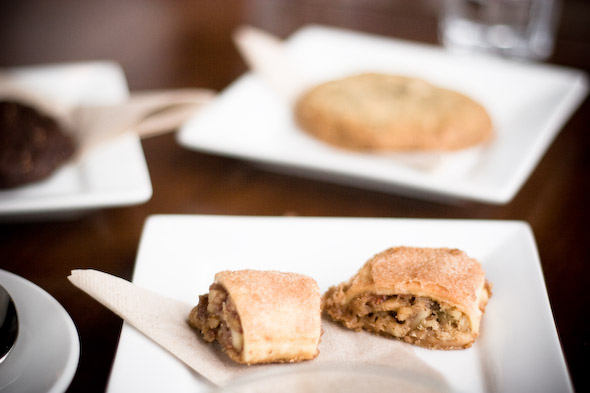 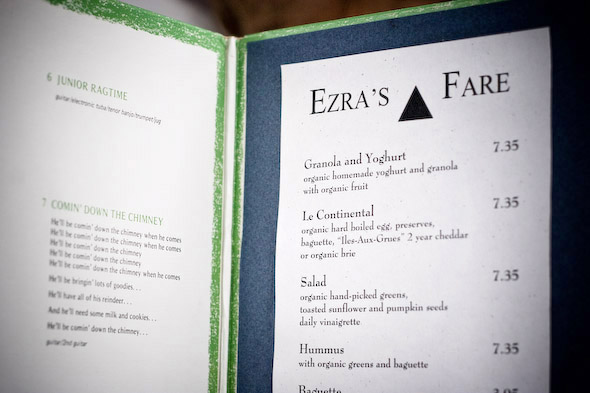 We're not having lunch (as much as I wish we were), but Alyssa enthusiastically looks over the options. "I could not be more on board with these menus," she says. They're constructed out of old record covers, ranging from Crosby, Stills and Nash to Raffi. The Raffi menu is actually autographed on the front and our minds our momentarily blown. Way to go Sarah! 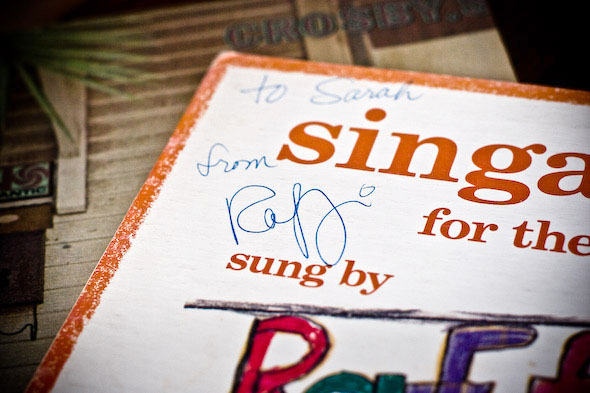 "Used things have energy," says Ezra Braves, referencing the menus, the old glass bottles that he fills with water for our table, and the front counter, tastefully constructed out of repurposed doors. There is an old payphone around the corner and a front of elevator buttons on the wall that deceivingly appears to be in working condition. 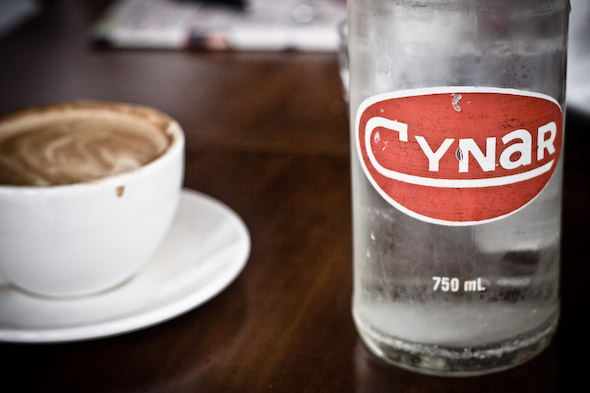 The rain dies and Ezra's starts to close down. We follow the family outside and I catch site of the 7-11 that I used to frequent when I lived here, before the plethora of Dundas west options. Luckily we're headed home to Dupont, the Dundas of the north, complete with its own Ezra's Pound. 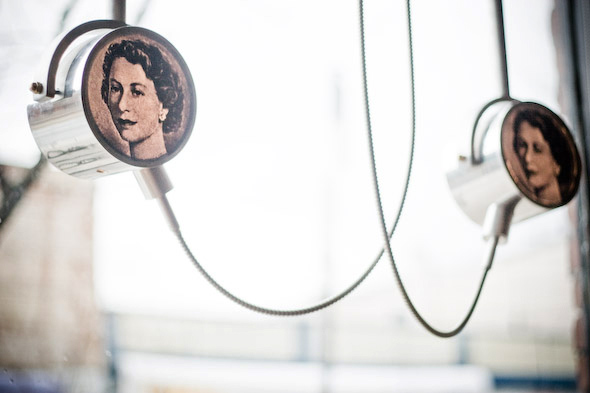 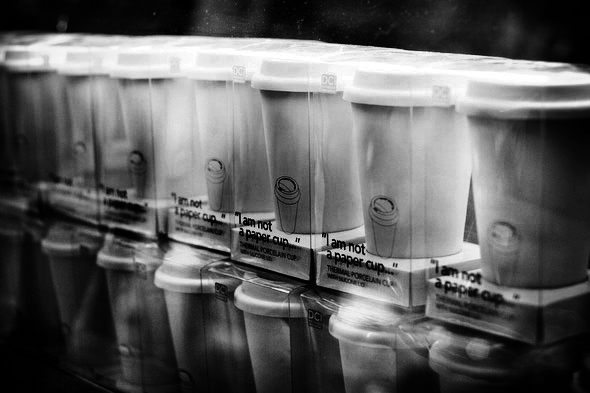 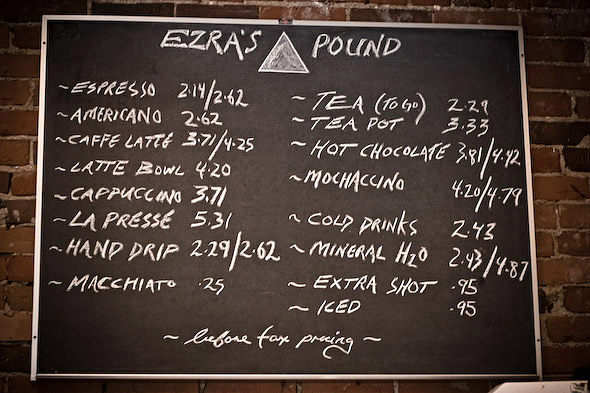