BakkaPhoenix is Canada's oldest science fiction bookstore. The store opened as Bakka Books in 1972, changed hands in 1980, then again in 2003. Among my group of friends, the store was a weekly visit back when we were going to the University of Toronto, and a few of my friends worked there (some still do).

The new owner, Ben Freiman, decided to add the name 'Phoenix' to suggest rebirth. He wanted to keep 'Bakka' in the name but "also wanted to make it known that the store - while familiar - was also going to be a little bit new."

The staff are highly knowledgeable and are all sf/fantasy fans themselves. I love the mini book reviews they have posted in front of some titles, written by the staff.

The current owner is Ben Freiman, who standing on the right in the photo below. The woman on the left is Chris Szego, manager of the store. She says that sales of used books took a huge blow when the GST was added, and have never quite recovered. "Since then, the store moved twice, and the used book sections have diminished in size (several times). So it's both chicken and egg: less space equals less sales, which means we accord it less space...etc." 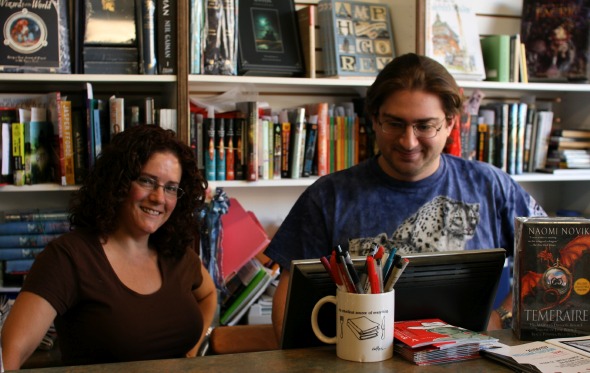 Chris was kind enough to answer a few questions for me about BakkaPhoenix.

Do you still sell used books as well as new?

Yes, we still sell used books, but we are primarily a new-book store. The sales of used books have declined every year that I've worked here (I started in 2000).

Why did you choose your new location at 697 Queen St.?

The move back to Queen West was primarily about space: we just outgrew the Yonge St. location. We looked at a number of areas, but Queen West had the most to offer - not only in terms of the actual space, but also in terms of the neighborhood. Yonge St. is an artery; Queen West is a destination. Eclectic and independently owned stores -- this is the kind of area in which we belong. It doesn't hurt that the space is terrific: bright, clean, with lots of usuable space, and a basement with an actual floor! (Not to mention hot water...)

What published authors have worked at the store?

In chronological order: Robert J. Sawyer; Tanya Huff; Michelle Sagara; Nalo Hopkinson; Cory Doctorow; Tara Tallan (who writes comics); Chris Szego; Sarah Elliott; Leah Bobet. There are other writers who are associated with the store to a greater or lesser degree: Ed Greenwood filled in behind the desk on a couple occasions, and Fiona Patton wired the old Queen West location for electricity.

How often do you host events at Bakka-Phoenix? What kind of events?

Hooboy, we have tons of events. We probably have, on average, an event a month -- but that's just the average. We had none last month; we're having two in August (including one today), and three in September.

Most of the events are book launches with one, two, or occasionally more writers. Most of our events are here at the store, though we've had several off site. We've also participated in the International Festival Of Authors at Harbourfront (a couple times) and Booked! (at Luminato, just past). We attend Ad Astra as a major dealer, and when the World Science Fiction Convention was in Toronto in 2003, we were there.

We're hoping to start a set of different sort of events: panel discussions; book discussions; tastings; etc. The logistics of that are still up in there air, but winter cries out for something interesting to do in the evenings.

I notice you're a writer, too. Could you tell me about your own writing?

I've had a couple of short stories published, and a quite a bit more poetry. I've also been lucky enough to land a few regular non-fiction writing assignments, many of them book-related. It's a great way to keep up with all the wonderful stuff being published outside of the genre I work in.

To find out more info about BakkaPhoenix, check the Web site or the BakkaPhoenix Livejournal community .