Living at the Royal York Hotel with Christopher Heard

Christopher Heard remembers the day when he sat in the lobby of the Royal York hotel with his father, waiting for a train to Montreal departing from Union Station, across Front Street. "I told him, 'I'd like to live in this place. I'd like to come here one day and just not leave.'"

Decades passed and Heard, by then a TV and radio personality and an author with several celebrity bios to his name, got his wish. Years of quizzing interview subjects about living in hotels and talking up his obsession bore fruit when an executive with Fairmont Hotels, the owners of the Royal York, suggested to him that he take on an unofficial role as writer in residence at the grand old hotel if a book could somehow be the result. Heard didn't have to think twice before he agreed.

"My initial fear when I started out, because I knew I was going to be writing about it, was that my lifetime love of this place, grand hotels and the like — had I overidealized my perception of this all out of proportion? Lucky for me it actually turned out to be better, because I was embracing all the things that are odd about hotel living. I wanted it — the weirder the better! I would go out looking for things. In a place like this, because of its history and its reputation, you didn't have to look far. You'd stand in certain places and a story would come to you." 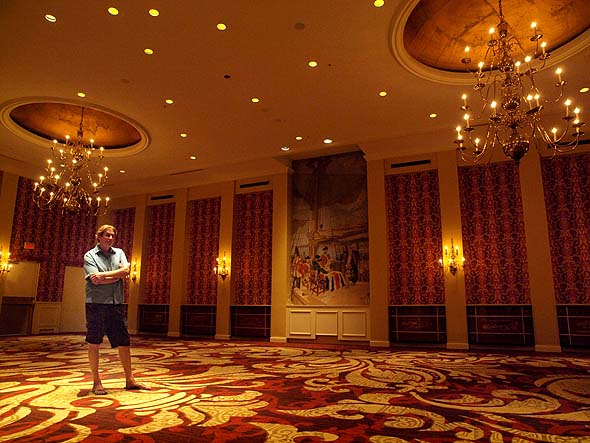 We're sitting by the pool at the Royal York, a spot that figures prominently in The Suite Life, Heard's book about hotel living, published this summer by Dundurn Press. A morning swim became part of his daily routine, and it was here that he had brushes with fellow guests — people like Arnold Schwarzenegger and heads of state who were headquartered here during the traumatic G20 summit of 2010. It was also where he'd witness guests slipping off their inhibitions, like the attractive woman here for a librarians' conference, who stripped naked in full view of Heard as he did his morning laps.

"For some reason, for whatever reason, she thought this would be an exciting little moment she could play out with no consequences," Heard recalls. "She knew I wasn't going to get out of the pool and say 'Now, that's borderline sexual harassment!' And then when I saw her later in the lobby in her pinstripe pantsuit it dawned on me, at that very moment — 'Is that you, or is this you? Or did this place cause the blurring of the two?" 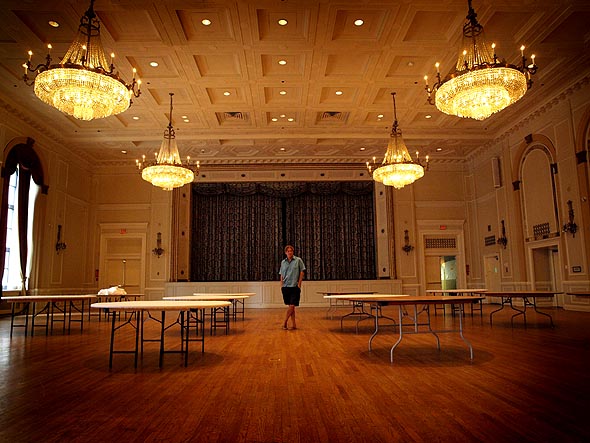 During a long poolside chat, and a further wander through the hotel's vast, empty midday spaces, Heard expands on some of the themes in his book, like the place of the hotel in pop culture, and its persistent role in our collective sexual imagination, as a backdrop and a place that encourages us to get loose.

"Why is it a clichÃ©? Because it's true! There is that sense here, that inhibitions lower considerably, and not just because you're in a hotel, but because you're away from home, and you're in a place where there's no judgment. There's anonymity and security and all those things that make for a perfect combination of elements that say, 'I can be exactly who I imagine I can be. Right here. Not who I will be when I check out of this place and go back to Sarnia, but while I'm here, I can feel what I want, I can say what I want.'" 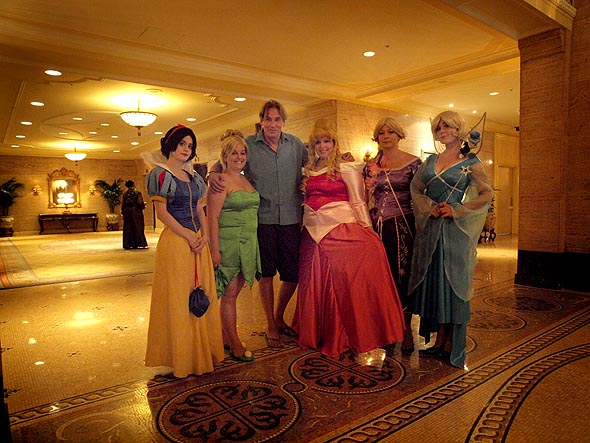 It's the week of Fan Expo, and the hotel lobby is full of Klingons and Star Trek Federation crew, comic book superheroes and a group of young women dressed as Disney princesses. Heard loves it all, and recalls chance encounters he's had, like the day he watched a Playboy centerfold sign magazines by the entrance while the Dalai Lama created a hush as he moved through the lobby to the elevators. The Royal York is a unique hotel, he says, inasmuch as it's come to embody the city in a way that only a handful of other hotels around the world can claim.

"New York has a few, the Plaza being one, and that was one that came up a lot in conversation because of the Eloise element, and people referring to me as a semi-grown up Eloise, and that's not an unfair thing. But New York being New York it has several, the Waldorf being another one. The Drake in Chicago. But I guess it depends on what you're looking for, because in New York you have to bring in the Chelsea, but then you're going for the infamous over the famous. In L.A. there's the Chateau Marmont and the Four Seasons and the Roosevelt, and that's the fascination for me with hotel history because a lot of history is made almost accidentally, unconsciously, in hotels."

"Robert F. Kennedy — where was he assassinated? The Ambassador Hotel in Los Angeles, and then here at the Royal York they recreated that in the kitchen for the miniseries on the Kennedys, because it resembled the kitchen at the Ambassador. Ronald Reagan was shot leaving the Hilton in Washington; the Watergate is a hotel. John Belushi died in his bungalow at the Chateau Marmont. It's an accident but it's not, because that's where people go for special occasions, for special events, to get in trouble. Sam Goldwyn said that if you're going to get caught doing something get caught at the Marmont, because they'll handle it." 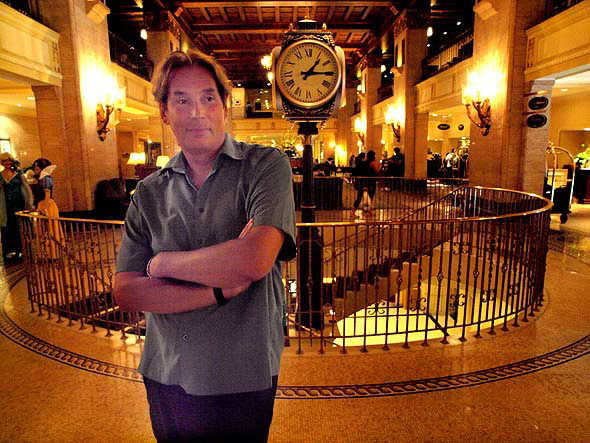 Celebrities play a big role in The Suite Life, because Heard deals with them all the time, but also because they work in a profession that requires them to spend long stretches as hotel residents, during filming and while working publicity junkets. For most people, hotel stays are rare events, but Heard had always thought himself uniquely suited to hotel life, thanks partly to the circumstances of his own birth.

"That was the thing in the book when I interviewed Arnold Schwarzenegger's aides, and they were saying it's a security thing that he lives in a hotel, because Sacramento doesn't have a governor's mansion. And I said no - you're missing the point, guys! He knows how to live in a hotel from all his location years in films - he knows the rhythm of it, which takes a bit of getting used to. In my case, this sort of transcended that, it was a more of a weird convergence of events that made me think, 'Fucking hell, this is like a dream come true. I can do this!' It had to be here. It had to be the Royal York, because my lineage and my past. And not just that I was conceived here, that my grandparents worked here, but I love it here, and I always loved it here, and I never knew why. I couldn't really quantify it, but if I had an interview to do with a movie star or something and I didn't have a location, I would always come here. If I had time to kill downtown I would always sit in the mezzanine."

Asked to name his favorite hotel movies, Heard struggles to narrow down the list. There are obvious titles, like Grand Hotel and Plaza Suite, recent films like Sophia Coppola's Somewhere, and personal favorites like 1408, a 2007 horror film starring John Cusack. ("You didn't say good — you said favorite," Heard jokes.) And then there's the most notorious hotel film of them all. 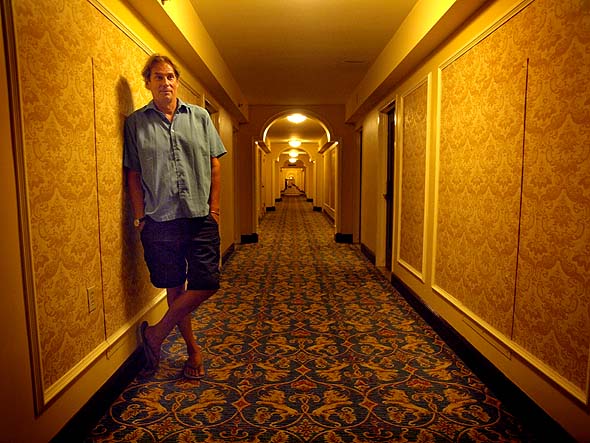 "The Shining is a fabulous example of a great spooky old hotel thing. I'm not likening that to this place, but I did write in my book that there was one moment, that I've had that. Seasonally, they'll close some of the floors here, and I was on one of those floors a few winters ago, and after a few days of hearing nothing, seeing no people, no sounds coming through doors, no newspapers, no maids. The hallway starts getting real long, and you start waking up earlier and you run down the stairs to make sure there are still people in the lobby and they haven't all left."

"And that movie — more so the book — captured something that this place embodies, but not in a malevolent sense. It's more benign. It's that you can't have a place like this and not gather up and store the massive amounts of human energy and stuff that goes on here, good and bad. Who knows - maybe why big old hotels like this do have a sort of sex drive; you're just absorbing all the energy that's going on around you."