Caitlin Cronenberg has been getting a lot of press lately. For those who haven't seen any of these articles let me summarize: she's the daughter of one of Toronto's most famous filmmakers. She just self-published 1,500 copies of Poser, a book featuring black and white nude photography. She doesn't drink, she likes to dance and, yes, she has posed naked for a photographer before.

This coming Thursday she'll be celebrating the official launch of Poser so in advance of that I caught up with her to ask her a few questions about her book and the challenges of self-publishing.

Where can someone currently buy your book?

As of this very moment it is only available online but by mid-July it will also be available at the Indigo Bay and Bloor Indigo store and both TYPE Books locations in Toronto.

Why has indigo decided not to carry it in more of their stores?

It's standard with self-published books. They are starting it in the stores with the widest selection of photography books, and then if the book sells well in those locations there is always the chance they will put it in more stores. It's hard enough to get a self-published book into Indigo in the first place, so I'm quite pleased.

Are you trying to get other Toronto booksellers to carry it as well?

I haven't tried yet. I was going to wait until after the launch to approach more stores. Time has been tight for the past few months so once the launch is over I can explore the possibility of wider release.

You mentioned it has been a challenge (as a self published author) to get your book into stores like Indigo. What makes it so difficult? What process do you need to go through to get bookstores to carry your book?

I have been very lucky so far, in that each store I've approached has felt strongly about the book and has wanted to support it, but in general major bookstores rarely take self-published books. There is a process that publishers go to when they put books into stores and this has been the exact opposite of that process. For me it has been about taking meetings and explaining my situation.

Will you be selling it online (other than your own site)?

Yes it will be sold on the Indigo online store. I haven't started the process of putting it on Amazon just yet.

Do you think the subject matter of the book makes it more challenging to get it into stores?

I assumed it would be, but I think people look at the photos and see that they aren't sexual or pornographic in any way, so it isn't too controversial. Also the book itself comes shrink wrapped and with a belly band, so it isn't easy for children to just leaf through it. Even though the subject sounds like it should be a bit more taboo, the photos aren't that risquĂŠ. It's nudity like we all see everyday.

Before you decided to self-publish, did you try to find any publishing house to publish your book?

I tried briefly, but not extensively. My book wasn't the right fit with the first place I approached, and then when I realized the process of getting a book published through a publisher could take years, I decided I'd rather publish it myself. I didn't want to wait that long, and I wanted to maintain control over the final product since I had such a clear idea of how I wanted the book to look.

When I started shopping the book around it was smack in the middle of recession panic, so taking matters into my own hands made sense that way too.

Aside from taking the photos, writing and finding your subjects, what were the key steps you needed to go through to self-publish your book?

The next steps were finding a printer, finalizing the details (page number, book size, paper stock, etc), and then putting the layout together. After the printer received the files, they did a set of proofs for me to approve. After the proofing process, they print the book. I got mine printed overseas, so the work didn't stop until I was finished loading 125 boxes from my parents' driveway into into their living room.

What printer did you use?

I used Tien Wah Press in Singapore and they did an outstanding job. 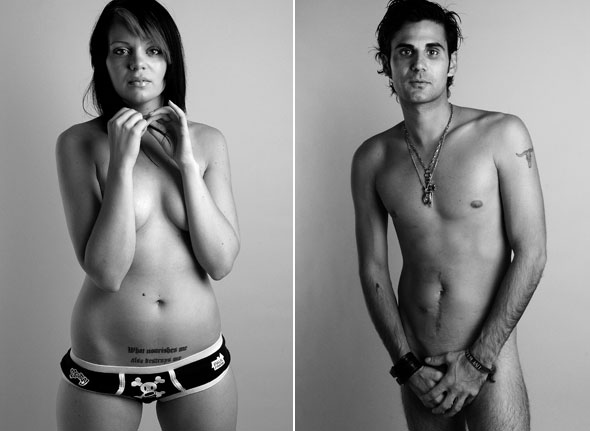 Do you distinguish between publishing nude photos in a book versus posting them online? In other words, how important is the medium?

I am very careful about what I post online. Any pictures that I release for public viewing, online or in any publications, don't show any genitals. I feel like nudity on the internet is so easy to spread, and I am worried about the pictures being taken out of context. I obviously can't control what people do with the pictures when they purchase a copy of the book, but I personally don't believe in posting them online. The series as a whole is what makes it special. Each picture individually, without context is just a picture

One thing I found interesting was how the book was organized. Most of the pages contain the name of the person and a photograph. But then at the back of the book you have more details about how you knew or met the person and got them to pose for you. Why did you decide to only include this extra info at the end?

It was important to me that people be able to look through all of the photos and see the subjects just as individuals, giving them a chance to make up their own stories and think whatever they wanted about each one. Then, after reading about the person in the index, the viewer has the opportunity to go back to the picture and look at it again in a completely different way

Sometimes quite a different way than how they first viewed it. It's like meeting people for the first time. We make judgments when we first meet somebody, but then after learning a bit about them our perceptions may change entirely.